RIVERHOUNDS' EARLY OFF-SEASON TAKEAWAYS: The Good, The Unfortunate and The Ugly

It’s just early November, but there have been a few news blips surrounding the Pittsburgh Riverhounds pro team since their late September playoff loss at New York Red Bulls II.  It’s been a mix of good, unfortunate, and ugly.
Here’s a brief summary of what’s transpired in the past month or so.
THE GOOD Midfielder Rob Vincent had a terrific year — and earned first-team USL selection when the league announced its postseason awards.
In addition to his accolades, the 24 year-old Liverpool, England, native, was also brought to the D.C. United on trial in October.  Sources say that Vincent’s trial went well — and he really enjoyed it.  There’s a chance he may be going back for another trial again early next year.   However, Pittsburgh soccer fans should not be too concerned in the short term, as Vincent is currently under contract with the Riverhounds through 2016, so it’s unlikely that Vincent may be moved anytime soon.   Vincent scored 21 goals in all competitions for the Hounds, and 18 in USL games.
In addition to Vincent, Kevin Kerr also earned USL recognition as well.   Kerr was named to the all-USL second team for a season which he led the Hounds in assists.
Both players are signed through 2016.
The team also has opened a new Allegheny Health Network Sports Complex at Cool Springs in the South Hills — and they’ve been excited about the location and the prospects it provides for cold-weather, year-round training.   It will also be a prime location for the Hounds biggest sponsor to offer a variety of services.
In addition, AHN’s facility at Cool Springs will offer outpatient orthopedic care, diagnostics and athletic training services in 14,000 square feet of office space complemented by the state-of-the-art fitness facility.
THE UNFORTUNATE
Yeah, lets cross out bad.  The Riverhounds had a nice season. There was a lot of positive momentum coming from a campaign that included some very memorable moments on the field.
But now, some unfortunate happenings to report.
A man responsible for helping head the team in a positive direction since the organization had come out of bankruptcy proceedings in 2014, was the newly appointed President Richard Nightingale.
Nightingale won’t be returning to the team.   An organization spokesperson Ian Tompson confirmed this with Pittsburgh Tribune Review’s Matt Grubba a few weeks ago.
In his introductory press conference in December, Nightingale spoke with high hopes — where he would aspire this organization to reach for the North Star. Under the his direction, if anything, the Hounds enjoyed a positive turnaround for the pro team. Attendance started off very shaky, but the success of the team, propelled by the U.S. Open Cup game hosting the D.C. United, and high scoring outfit, certainly helped bring excitement and by mid-summer, the stands were packed for most games.
Nightingale, a former Nike executive and native of England, oversaw the refurbishing of the generic bar area at Highmark Stadium — as it transformed into a cozy sports pub.
Another fixture in the Pub for most of the season included the Turnpike Cup, a new trophy that was created for the winner of the Annual Keystone Derby series between the Riverhounds and the Harrisburg City Islanders.  Nightingale instrumental in bringing this new twist to a series that both clubs could play for each year in their already intense interstate rivalry. Maybe it was ironic that the two team would play in some very memorable and season deciding games. 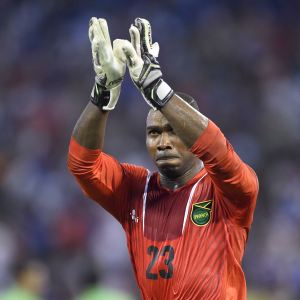 Riverhounds goalkeeper Ryan Thompson will not return to Pittsburgh in 2016.

Nightingale was also very active behind the scenes working to build relationships with everyone he could to help build bridges for the Riverhounds.  The relationship with Allegheny Health Network appears to have strengthened with the completion of Cool Springs site is affirmation of that.
Nightingale returned back to Oregon, where his wife and family still were living.
There’s still a lot of work to do, but hopefully for the Riverhounds — and the long-term sustainability of professional soccer in Pittsburgh — Nightingale helped lay the foundation to many more good things to come.
In the interim, team owner Tuffy Shallenberger will assume the duties as Team President.
Losing two quality players is never easy.  But two quality goalkeepers who became popular additions and valuable contributors, will both not be returning to the Hounds in 2016.
Jamaican National team keeper, Ryan Thompson, who was the starter at the beginning of the season, and became the man in goal for the Reggae Boyz during their run to the Gold Cup Final, including an upset of the U.S. Men’s National team, has told a Jamaican newspaper he will not be returning to Pittsburgh.  He stated that they had “a mutual parting of the ways” and was hoping to land a spot on a roster in Europe or in MLS.
He developed a nice bond with the Riverhounds Steel Army Supporters…

Goalkeeper Calle Brown, who the Riverhounds signed to his first-ever professional contract after he led the University of Virginia to an NCAA National Championship in 2014, was signed by Major League Soccer’s Houston Dynamo. Goalkeeper Calle Brown got the attention of Major League Soccer — as he will be in the Houston Dynamo organization in 2016.

There will likely be additional news items coming by way of the players themselves, or through teams that pick them up, but there will also be the likelihood of more players moving on to other teams.
The one player that many close to the team would hope won’t go anywhere will attacking midfielder Lebo Moloto.  While Vincent and Kerr were clearly the team’s most dynamic scoring duo, The 22-year-old South African native, Moloto became the player who started to become the most dangerous player for the Hounds as the season came to a close.
There has not been any news on this front yet, but I would have to suspect that the 2013 Seattle Sounders FC Superdraft selection will be getting interest from MLS teams.
THE UGLY
How about a prison mug shot in a major metropolitan newspaper of the player who scored the only two playoff goals in a 4-2 loss at NY Red Bulls in September?
After what was a terrific season for Willie Hunt capped by the two-goal performance in the playoff game, it seemed like things got even better.  The defender was picked up by his hometown team, NASL’s Tampa Bay Rowdies, after the Hounds season, to join that club as they were making a final playoff push. Unfortunately, Hunt was also picked up by the Ybor City P.D. a week later.
According to the Tampa Tribune (and other news sources), Hunt was arrested in Ybor City only hours after a Rowdies game, charged with possession of cocaine.
The USL/NASL veteran Hunt, 28, status of returning to Pittsburgh next year was up in the air, but he was the last player that I interviewed in September after the playoff loss.
In the post-game interview, he was very optimistic and hopeful that the Hounds were headed in the right direction and seemed to want to be a part of that.
Unfortunately, for Hunt, he is facing a difficult personal situation, and hopefully he can keep his nose clean and get things straightened out for his own personal good.  The consequences of his arrest included getting released immediately by the Rowdies.  The Riverhounds said that at the end of the season, Hunt was no longer under contract, so they didn’t offer any additional comments.