The magic from Duquesne University women’s soccer team’s run to their first ever Atlantic 10 Championship a year ago returned on Sunday, as they rode an opportunistic 2-0 win over University of Pittsburgh at Ambrose Ubanic Field in Oakland to keep bragging rights over its cross-city rivals.

It was a similar formula that the Dukes (1-1-0) followed in winning the A-10 title a year ago — get the first goal — and ride another strong performance by Kyra Murphy  who made eight save and faced four corner kicks.

Goals by Malea Fabean and Katie O’Connor were enough to lead the Dukes to their second straight win over the Panthers (0-1-1), after losing the first eight matches played between the two programs since 1995.

After Pitt opened the match owning most possession, Murphy and Duquesne held off a few close calls, including a wild scenario after an Emily Pietrangelo free kick to the center of the box connected with Ariel Fernandez, who’s shot ricocheted off the bar, then Siobhan McDonough‘s rebound attempt was blocked.  As the ball disappeared into the midst of a scrum right along the goal line, Murphy somehow managed to grab the ball.

As the half edged closer to halftime, Duquesne became more patient into their attack when they started to see that Pitt’s back four were dropping back deep and leaving a lot of space between the midfield and the backline.

Early attacking efforts on long balls failed, but after setting up a pair of consecutive corner kicks, the Dukes took advantage of another set piece — after a Pitt foul.

Casey Aunkst delivered a free kick from about 40 yards that found its way into the box, and connected with Fabean, who headed in the go-ahead goal.

From there, Pitt began chasing the equalizer, and Duquesne stayed pretty well organized despite being out-possessed for most of the rest of the game.    Most of Pitt’s chances for stretches of the second half were limited to shots from distance.

In all, Pitt sent 19 shots, with eight on target.

“I thought our second half was better than our first half and we were able to create several chances and from that point I thought it was positive,” said head coach Greg Miller.

“But, we didn’t do a good enough job of capitalizing on those moments. We’ve got to get better in the final third, we’ve got a lot of youth out there and we spent a fair amount of time on it, but we’ve got to go back and give these kids some more coaching and some more repetition and be clearer about how we want to play.”

“We’ve got to do a better job of keeping the ball and moving the ball. I thought our play, at times was too slow and allowed Duquesne to close some things down. We just have to be a little bit better in all areas.”

Murphy came up big when she needed to in the late stages.

In the 75th minute, Pitt’s Hanna Hannesdottir had room to shoot from the top of the box after making a nice turnaround move — drilling a shot toward the left side of the goal.

Murphy dove to her right and made her most dazzling save of the night.

Moments later, in the 77th minute, on a Pitt corner kick that sailed to the near post area, Murphy came forward on the ball, but it sailed through into the goal box, but fortunately her teammates cleared the ball as away.

As the momentum switched back to Duquesne after facing pressure from Pitt for much of the 2nd half, O’Connor took care of a loose ball in the center of the box.

On the end of a counter attack as things opened up for the Dukes, O’Connor turned to her right — and got just enough from a right footed shot to put it past diving Pitt keeper Taylor Francis, that pretty much put the contest out of reach.

For Pitt, it was tough loss after quick turnaround after going on the road Friday for an impressive 2-2 draw at Michigan.

It was enough to secure a 2-0 win — and for the time being — giving Duquesne the bragging rights in a series between two programs that are on the rise. 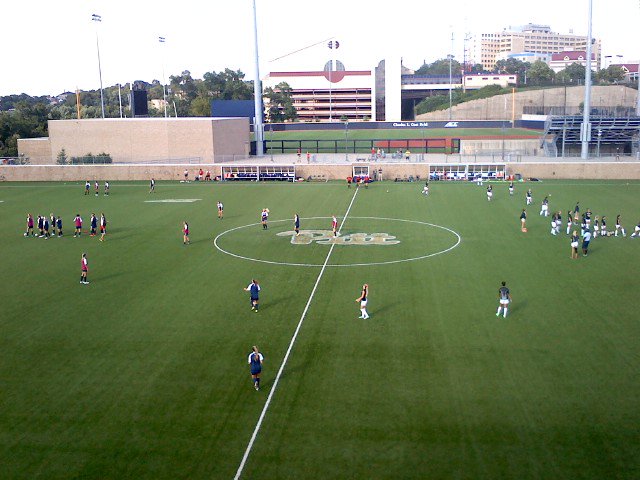 A look at Ambrose Urbanic Field on the upper campus of the University of Pittsburgh on Sunday prior to kickoff.

Sunday’s contest was the first of a three-match homestand for the Panthers as they will welcome Colorado College on Thursday before hosting Xavier Sunday.
Duquesne returns to action next Sunday, at 1 p.m. at home against Youngstown State at Rooney Field.  Youngstown State are 1-0 after defeating Robert Morris on Friday.