Former Hounds on Board as Ft. Pitt Regiment Set to Return to #NPSL 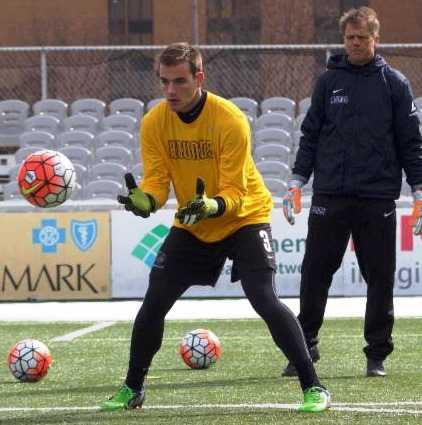 The Fort Pitt Regiment are returning to action in 2017, and will be bringing back some familiar faces to many in Pittsburgh’s soccer circles.
A trio of former Pittsburgh Riverhounds, Brendan Alfery (Central Catholic / Robert Morris), Nick Kolarac (West Allegheny / St. Francis) and Anthony Virgara (Keystone Oaks / Marshall) will be representing the Regiment this coming season in National Premier League (NPSL) play.
Coach John Kowalski also returns to the fold this season as the PA-West sponsored Regiment’s Head Coach.
Kowalski was at the helm in the team’s previous seasons in 2014 and 2015.
The long-time soccer coaching legend, who at one time coached at the professional level with Tampa Bay Mutiny and the Pittsburgh Riverhounds, as well as Robert Morris’ men, and now women’s team, is looking forward to a new season for the Regiment.

“I am enjoying where I am now — not only coaching Robert Morris women, but helping with the development of young players with the Regiment,” said Kowalski.
“The PA West (Soccer Association) wanted to sponsor a team as there were a lack of opportunities for players after the age of 19 in our region.  With the Regiment, players are provided a chance to play in meaningful games against some very good competition.”

In its short history, the Regiment have provided future pros like Nico Brett (former Robert Morris standout who is currently with Portland Timbers 2) and Jamie Luchini (former North Allegehy/Lehigh University product who was drafted by Philadelphia Union) with opportunities to play in a high-level, competitive environment in the National Premier Soccer League, while they were still in college.
Alfery also played with the Regiment in 2015, prior to his senior campaign at RMU.  The Cheswick native signed with the Hounds in 2016.

“The NPSL has teams with players that have been professionals, and then there’s some teams like ours that will have a lot of players who are still in college,” added Kowalski.
“It adds to the challenge, as sometimes guys have jobs and internships during the summer time.  This year, we’ll try to have practices a little later in the evenings.”

With the Pittsburgh Riverhounds no longer fielding a U-23 team in Premier Development League, the Regiment now are the sole club in our region that provides players still aspiring to secure pro contracts with a chance to stay sharp and continue to develop their game.

“In just a few years, we’ve had players like Nico and Jamie, who’ve been able to get contract in MLS, and USL,” said Kowalski.
“In the case for players like Brendan, Nick and Anthony, they have experience, but they still need to improve technically and we can help them so that they can be better prepared when they have opportunities to go on trial with a pro team.”

Kowalski said that they have approximately 17 players registered for the team, and there will be additional tryouts on May 8 and 9, and the team will begin preseason on May 10 in preparation for the season which will start two weeks later.  He is hoping to have a completed roster of up to 24 or 25 players.

“We’ll have a lot of work to do to get on the same page, figure out what we are going to do with how we will line-up, what our formation will be,” said Kowalski.
“I am optimistic.  We have a lot of good players coming from Robert Morris, St. Francis and even a few players from Duquesne will be joining us.”

As of now, the Regiment plan to open home schedule — at Thomas J. Birko Memorial Stadium in Montour — against Rochester RiverDogz on May 24.
Kowalski said they are open to playing home games at additional locations to create “Community Days” at locations around the Western PA area.
The 12-game schedule will feature matches against fellow Great Lakes Region teams including defending NPSL Champions AFC Cleveland, Buffalo FC, Erie Commodores and Dayton Dynamo.
In its debut season in 2014, the Regiment took the Great Lakes Eastern Conference title.
Despite losing in the playoffs that season, they earned a spot in the 2015 Lamar Hunt U.S. Open Cup, which they lost 1-0 in a match against the West Virginia Chaos.