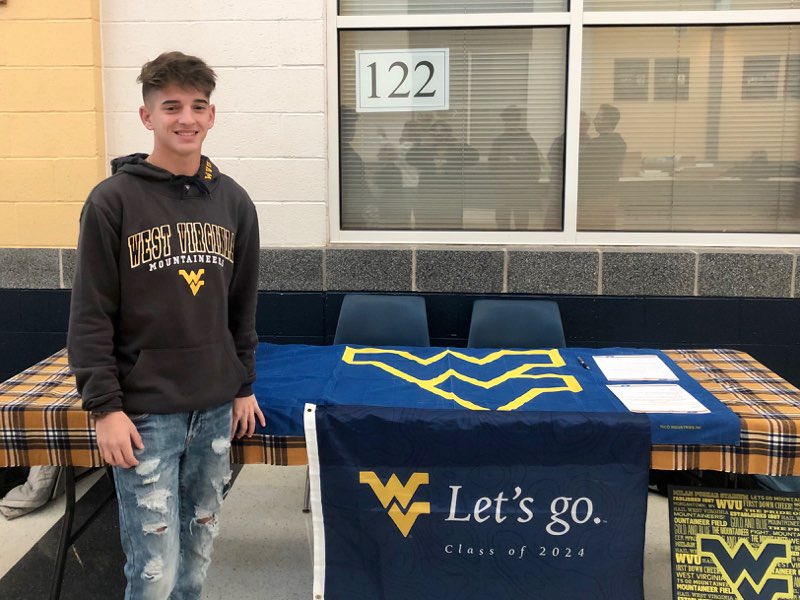 “We’re pleased to announce the signings and commitments of Aiden, Brian, Marc, Nino and Zak,” Stratford said. “In light of our current global crisis, this announcement only heightens our excitement for the beginning of the fall and the brighter future to come for everyone.

“These five incoming freshmen will add quality depth to our returning group. It’s the start of an amazing four-year journey for these young men, one our staff has experienced at WVU, and we look forward to facilitating an incredible student-athlete experience for them, resulting in a lot of success for the team.”

Civitate hails from Canonsburg, where he played for coach Larry Fingers at Canon-McMillan, which won the WPIAL Boys 4A Championship in October.

Additionally, he played his club soccer with the Pittsburgh Riverhounds Academy for coach Bryan Cartwright.

At Canon-McMillan, Civitate led the Big Macs to a 15-4-1 record and a WPIAL championship as a senior. He was a two-time Big 56 team performer and was named to the All-WPIAL team as a junior and senior. Additionally, Civitate helped his club team to a Pennsylvania Futsal State Cup title and U-19 national title in 2018.

The son of Frank and Sandra, Civitate plans to major in business administration at WVU.

Abdul-Jalil hails from Charleston, West Virginia, and played soccer for Erik Engle at George Washington High. He was the 2019 Class AAA State Player of the Year and named a Mid-Atlantic All-Region player by the United Soccer Coaches. He also was named to the all-state first team and All-Mountain State Conference team in each of the last two seasons.

Abdul-Jalil, who played his club soccer for WVFC, helped the Patriots to back-to-back Class AAA state championships in 2018 and 2019. The son of Anne Abdul-Jalil, he plans to major in exercise physiology at WVU.

Bonnaire arrives to Morgantown from Warrenton, Virginia, where he attended Fauquier High and played at the Virginia Development Academy for coach Matt Lacey. He played in 10 matches for VDA during the 2019-20 season, earning nine starts.

Prior to that, Bonnaire earned all-district honors at Fauquier in 2018. He also played basketball for the Falcons. The son of Fabrice Bonnaire and Nancy Griffin-Bonnaire, he plans to major in physics at West Virginia.

A native of Lino Lakes, Minnesota, Brown played at Totino-Grace High for coach Bill Vance. He also was a member of the Minnesota Thunder Academy (club) under coach Dusan Jakica.

Brown played in 22 matches, earning 13 starts for MTA’s U-16/17 team in 2018-19. He also spent time with the U-18/19 squad during the campaign. The son of Christopher and Gloria Brown, he plans to major in exercise physiology in college.

Along with his contributions for the U.S. Soccer Development Academy squad, Slifer led Boone in goals, assists and points as a junior and senior. He also was the leading scorer at Berks Catholic High during his freshman campaign.

The son of Larry and Mindi, Slifer plans to major in business marketing and entrepreneurship at West Virginia.

Andreadis arrives to Morgantown from Cincinnati, Ohio, where he played at Anderson High and Kings Hammer Academy. He helped his school win three conference championships and two district titles, as well as an appearance in the regional finals.

Andreadis was named to the All-Southwest Ohio and the Eastern Cincinnati Conference (ECC) First Team twice and scored 34 goals and added 25 assists at Anderson. At the club level, he led Kings Hammer Academy to a U.S. Youth Futsal national runner-up finish in 2016, and a Midwest Regional League championship in 2018.

The son of Steve and Maya, Andreadis is majoring in athletic coaching education.

Baer hails from Huntersville, North Carolina, where he attended William Amos Hough High and played for the Charlotte Independence (U-19), a U.S. Soccer Development Academy team.

The midfielder was a five-year development player and led the Carolina Rapids (U-17) to two consecutive playoff appearances, before he joined the Independence last season.

Baer is the son of Bob and Julie Baer. He is enrolled at WVU in athletic coaching education.

A native of Morgantown, Borneo arrives to WVU from the University of Kentucky, where he played for two seasons. He tallied 19 career games played, including two starts, for the Wildcats from 2018-19. Last season, he registered one goal and one assist in 300 minutes played, while helping UK to the NCAA Tournament. As a freshman in 2018, Borneo was a part of a Wildcat team that won the Conference USA Regular-Season and Tournament titles and advanced to the NCAA Tournament Quarterfinals.

Prior to his time at Kentucky, Borneo attended Morgantown High and played for the Columbus Crew Development Academy. Borneo, the son of Kernell and Stacie Borneo, is majoring in exercise physiology and has two years of eligibility remaining.

Swiger hails from Fairmont, West Virginia, and arrives to Morgantown from Bowling Green, where he played two seasons for the Falcons from 2018-19. An Academic All-MAC selection in 2019, Swiger played in 22 career matches at Bowling Green, including two starts. As a sophomore, he logged 546 minutes, scoring two goals on 12 shots and added an assist in 546 minutes played. His goal against Detroit Mercy on Oct. 1, marked his first career game-winner.

Swiger attended Fairmont Senior High, where he was named the 2017 West Virginia High School Soccer Coaches Association (WVHSSCA) Player of the Year. He also was a member of the Polar Bears’ state championship team in 2015. In all, Swiger finished his high-school career with a school-record 127 career goals.

Swiger is majoring in business at WVU, and he has two years of eligibility remaining. He is the son of Scott and Denise Swiger.

Along with WVU’s eight total U.S.-born newcomers, the squad will announce its international signees at a later date.