Louisville held the possession edge throughout the match, but it was the Riverhounds who made an impressive string of passes to create the first goal when Kenardo Forbes initiated the attack, then received the ball back. Forbes then laid forward a perfectly placed ball to Jordan Dover, who made a perfectly timed move on the ball into the box.

Dover took a touch, and delivered a perfect strike for the equalizer.

Patience on the ball and brilliant work by Forbes and his teammates.

They played it around — nothing working so the ball gets back to Forbes — and he sends a perfect ball to Dover. https://t.co/odutrVg7Ln

At the start of the second half, Pittsburgh came out of the gates strong, capitalizing on Louisville’s mistakes in playing it out of the back.

Robbie Mertz scored just seconds into the half, when Ropapa Mensah won the ball when pressing high into the box and found the Upper St. Clair native making a run forward.

Just five minutes later, Anthony Velarde was the recipient of another Mensah takeaway in the 50th minute.

Mensah won the ball on the left side, and instead of rushing through and taking a shot, he waited a few seconds and found Velarde on the back post for the easy one-time volley finish.

Once they build the two-goal lead, and seemingly taking the air out of the new stadium, Pittsburgh locked down Louisville’s attack with a clinic on defending with the lead.

If you’re trying to keep track of subs, the Hounds have two more subs that they could use, but only one more time that they can use them.

66′ – Danny Griffin and Mark Forrest also coming on. Hunter Ashworth — who hobbles off the field and Ropapa Mensah are coming off.

62′ – Cam Lancaster gets some room to shoot just inside the 18, and it’s an easy one for Gomez to collect.

Another goal set up by high press!  What composure by Ropapa Mensah — gets the takeaway then delivers perfect pass to far post side to Velarde!

High press out of the gate pays off. Left footed blast after Mensah wins ball! Hounds take 2-1 lead in the very opening minutes of the 2nd half! 46′

Here’s a look at the equalizer.

Patience on the ball and brilliant work by Forbes and his teammates.

They played it around — nothing working so the ball gets back to Forbes — and he sends a perfect ball to Dover. https://t.co/odutrVg7Ln

Hackworth not happy with his club’s effort in the last part of the half.  The Hounds awoke a bit and it started when they started to take aim at getting the ball forward to Mensah. Once they finally strung together some passes in the attacking third, they scored!

Great spell of possession by the Hounds for about a minute before that sets it up. Quality stuff. 45′

42′ –  Mensah suddenly with two decent chances late in 1st half. That second one — if he slides it over to the right side — it’s probably a goal.

All three shot attempts for Pittsburgh have come from Ropapa.

36′ – Mensah’s done a nice job in drawing some fouls and holding up the ball. Does it again to set up first free kick chance for Hounds in 36th minute.

27′ – YELLOW CARD — Hunter Ashworth might have legit complaint there with that but he draws the match’s first yellow card on that tackle attempt.

SPEEDY WILLIAMS with a turf burning shot off the bounce. The former Robert Morris University standout scores the first ever goal in Lynn Family Stadium history.

Here’s a look at Mensah’s effort…

5' | @RopapaMensah gets off our first shot attempt of the season.

5′ – Mensah with decent shot attempt from just outside the box. Hounds with most of the possession so far in first five minutes.

Ryan James always said he prefers to play in the middle. By the looks of this line-up — he’ll get his chance today.

Mensah gets nod at the top! 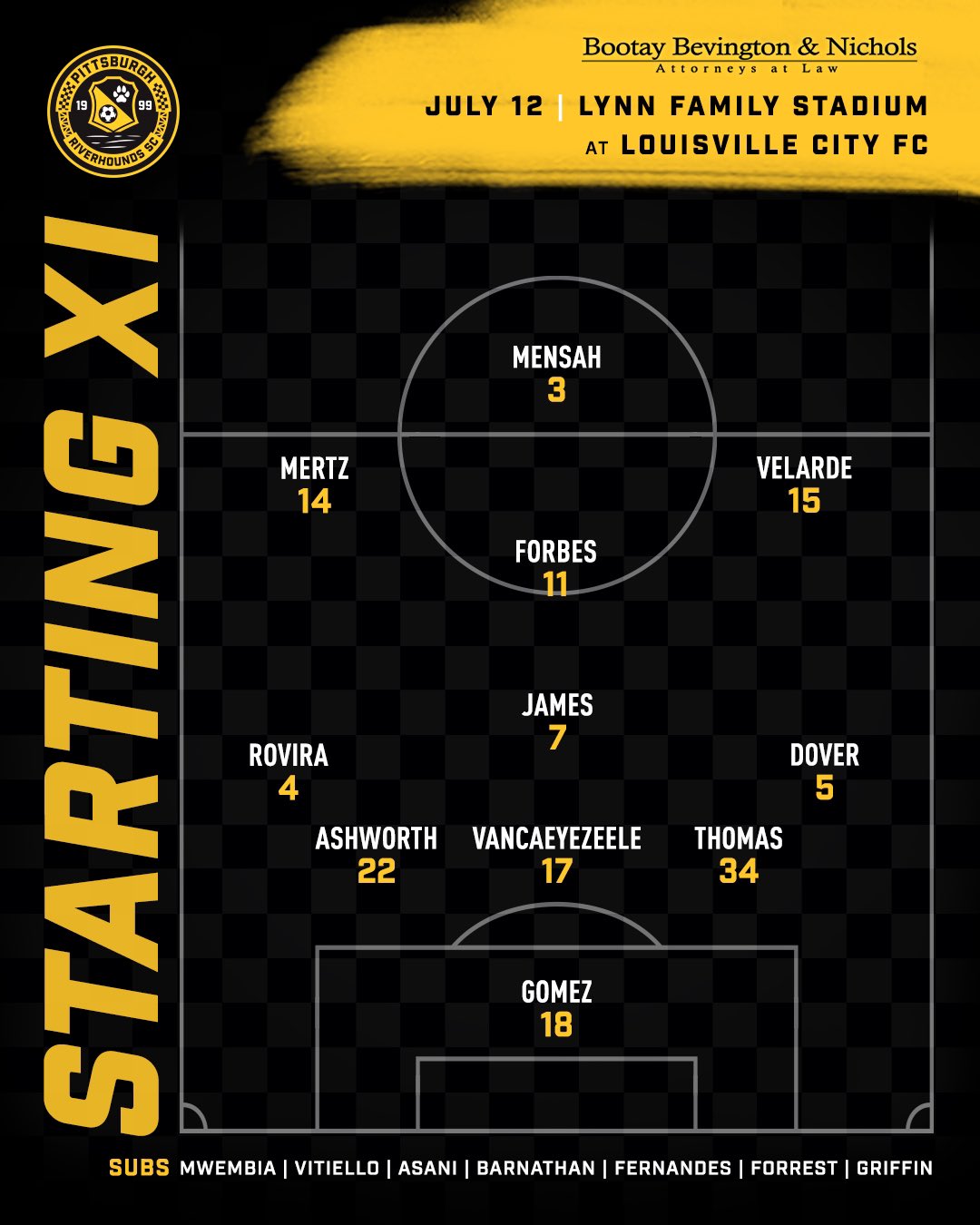 The Riverhounds’ last match against Louisville came during the 2019 Eastern Conference semifinals, where the Hounds fell short in extra time, losing 2-1. The Hounds started this game on top in the 11th minute, when Thomas Vancaeyezeele headed in a corner kick from teammate Kenardo Forbes. They then continued to hold the lead until the second half of the game when Louisville scored its first goal. Louisville scored again in the 118th minute (extra time) to defeat the Hounds.

Despite dropping their last meeting, the Hounds hold an all-time record of 3-1-1 in road games against Louisville. This away record includes a two-game winning streak.

As Pittsburgh has yet to play this season, Louisville got in one match before the season had been suspended in March. They defeated North Carolina FC, 1-0, on the road.