In a match which had with various momentum swings, Robert Morris men’s soccer picked up its first-ever result in Horizon League action by playing Green Bay to a 0-0 draw in Love’s Park, IL on Monday afternoon.

The Colonials were outplayed in the first half, surrendering six shots while only putting one shot on target in the first 45 minutes.

After withstanding the early first half pressure, they played Green Bay evenly through the second half and into both overtime periods, creating three shots on frame in the process.

Robert Morris’ best chance of the match may have come early in the first overtime period when Gustaf Moberg dangerous shot was saved by WGB’s Jamison Yoder.  Moberg followed up with another shot that missed over the bar.

The Colonials will be back in league action again when they return home to host Purdue Fort Wayne on March 6th at SouthPointe Fieldhouse.

108′ | Yellow card to #16 Ruben Linden. RMU was on a break and Ruben made a sliding challenge.

102′ | WGB’s Kevin Cela gets an opening through the midfield and takes a shot at the top of the box and puts it over the bar.

RMU came back with a stronger 2nd half — including five shots (GB with lead in shots 13-6).

73′ |  RMU’s Lorenzo Guagneli lashes one but it sails high of the net!

48′ | Fredi crosses into the box and RMU’s defender gets a slight touch and sends it out for a corner! No result from the corner!

39′ | WGB’s Dylan Campbell swings in a cross and Ethan Hoard is back post and gets a shot off that is cleared off the line and put back for a corner. No chance on goal from corner. 0-0

14′ | WGB chance…  Tim Stiller is played down the wing and swings in a beautiful cross that connects with Villi in the box! Villi scores but the offical flag was up for offsides. 0-0 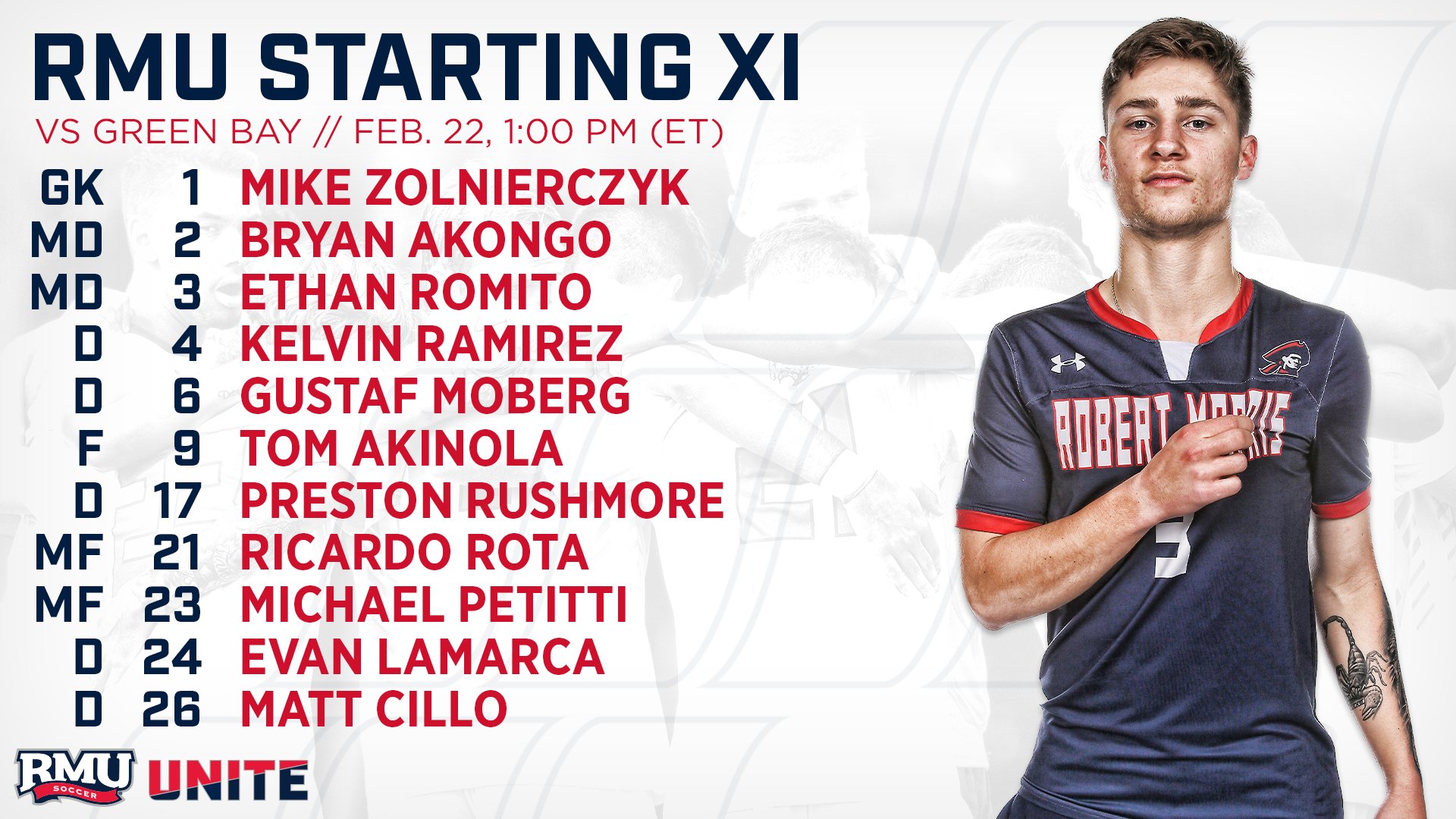 RMU was idle last week after the cancellation of their previously scheduled series with IUPUI.

When they last took the field, RMU dropped its home opener against Cleveland State 2-0 at SouthPointe Fieldhouse on February 10.

Despite a second straight loss, the Colonials showed signs of improvement against CSU, registering three shots on target while consuming six after conceding ten in their opening game against Oakland.

Bryan Akongo, Gustaf Moberg, and Preston Rushmore each finished with a shot on target.

Green Bay is 1-0 this year and has been idle since February 4th after their scheduled matchup with IUPUI on February 10 was also cancelled.

The Phoenix earned a win over Cleveland State in their only game in 2021, scoring with just under a minute left in the second overtime period against the Vikings to earn a 2-1 victory back on February 4th.

Green Bay was picked to finish seventh overall in the 2021 Horizon League Pre-Season Coaches Poll.  The Phoenix and the Colonials have only met once before in their history, a 2-0 Green Bay victory at the North Athletic Complex on September 13, 2009.

The Colonials have a scheduled off weekend following the trip to Green Bay before they return home to host Purdue Fort Wayne on March 6th at SouthPointe Fieldhouse.