In its rematch with Clemson to decide the ACC’s NCAA tournament automatic qualifier, the Pitt Panthers came up empty, losing 2-0 at Historic Riggs Stadium on Saturday.

Clemson secured the automatic bid by finding opportunistic goals from Quinn McNeill early in the first half, and Isaiah Reid late in the second half.

When asked what was most important thing about this win for Clemson, its second against Pitt, when the Panther were top-ranked.

“It’s confidence and belief.  That’s most important. This win gives our team that,” the veteran coach said.

Clemson scored its first goal in the 17th minute, as Quinn McNeill put the Tigers up 1-0. The Panthers totaled four shots in the final eight minutes of the first half, but couldn’t connect and trailed 1-0 at the break.

Quinn McNeill scores off the volley to give #ClemsonUnited an early 1-0 lead! Pipe provided the great ball into the box!

Both teams registered six shots, while Clemson led in corner kicks 6-3 at the half.

The match stayed, 1-0, until the 83rd minute when Clemson scored its second goal of the contest (Isaiah Reid). Pitt forced two corners in the remaining seven minutes, but couldn’t convert as it fell 2-0.

The teams ended the match even in shot attempts (11-11, with Clemson having the edge, 6-3, with shots on target).  Pitt held a slight edge on corners (8-7), but with every advance into the final third, they couldn’t create too many clear-cut opportunities.

Graduate student goalkeeper Nico Campuzano had three saves on the evening. Sophomores Veljko Petkovic and Raphaël Crivello along with freshman Bertin Jacquesson each tallied two shots for the night.

Pitt will now await its fate as they appear to be a lock to secure an at-large bid to the NCAA tournament, as the pairings and brackets will be released on Monday.

Isaiah Reid with the goal.
Seye with a nice layoff to the left and Reid beats Nico Campuzano inside the left post.

Both Luke Peperak and Luke Mort into the match again for Pitt as corner attempt to near post is cleared.

72′ – Pitt completely dominating possession, but they’re stumbling every time they get to the edge of the box. They have 18 minutes to find the equalizer.

62′ – Jacquesson has been the best player on the field tonight.

Again, sets up a corner with dangerous run.
Played to far post but Crivello header misses.

56′ – Pitt showing more composure on the ball, owning possession for much of 2nd half but most efforts in attacking third are coming up short. Latest Petkovic shot from outside box not even close.

50′ – On long corner played way to far side, it’s Jacquesson again who gets to it, then makes a great run up the end line, sends dangerous low cross into box for Ordonez on far side but can’t convert as he falls.

48′ – Jacquesson showing some individual brilliance in getting it forward, but then takes a shot he’d like to have back, sending way over the bar

44′ – Pitt gets in transition — they switch it over to the right for Loeffelsend who breaks to edge of box but he hits it too high. Maybe a hard low cross there would have been better?

40′ – Pitt finally showing some patience in the attacking third. Mirkovic with room to shoot and forces Marks into diving save!

38′ – Shaky clearance by Campuzano — leads to corner for Clemson. Then on ball in to near post it bounces off crossbar. Pitt clears it though.

A lot of the things that plagued Pitt in the first match vs Clemson in November are happening again. Not comfortable playing it out of the back and through midfield. Credit to Clemson forwards and attacking MF’s.

Pitt’s Bryce Washington attempts to head free kick attempt, but Tigers’ Quinn McNeill is there to drill it into the net.

16′ – Nice countering run by Pitt’s Bertin Jacquesson to get into box, but shot deflected and then saved by Clemson’s George Marks.

5′ – Both sides with early corners. Jasper Loeffelsend with a foul that sets up free kick for Clemson too.

The ACC Network is airing Pitt-UNC women’s softball at the moment as that game has run over. 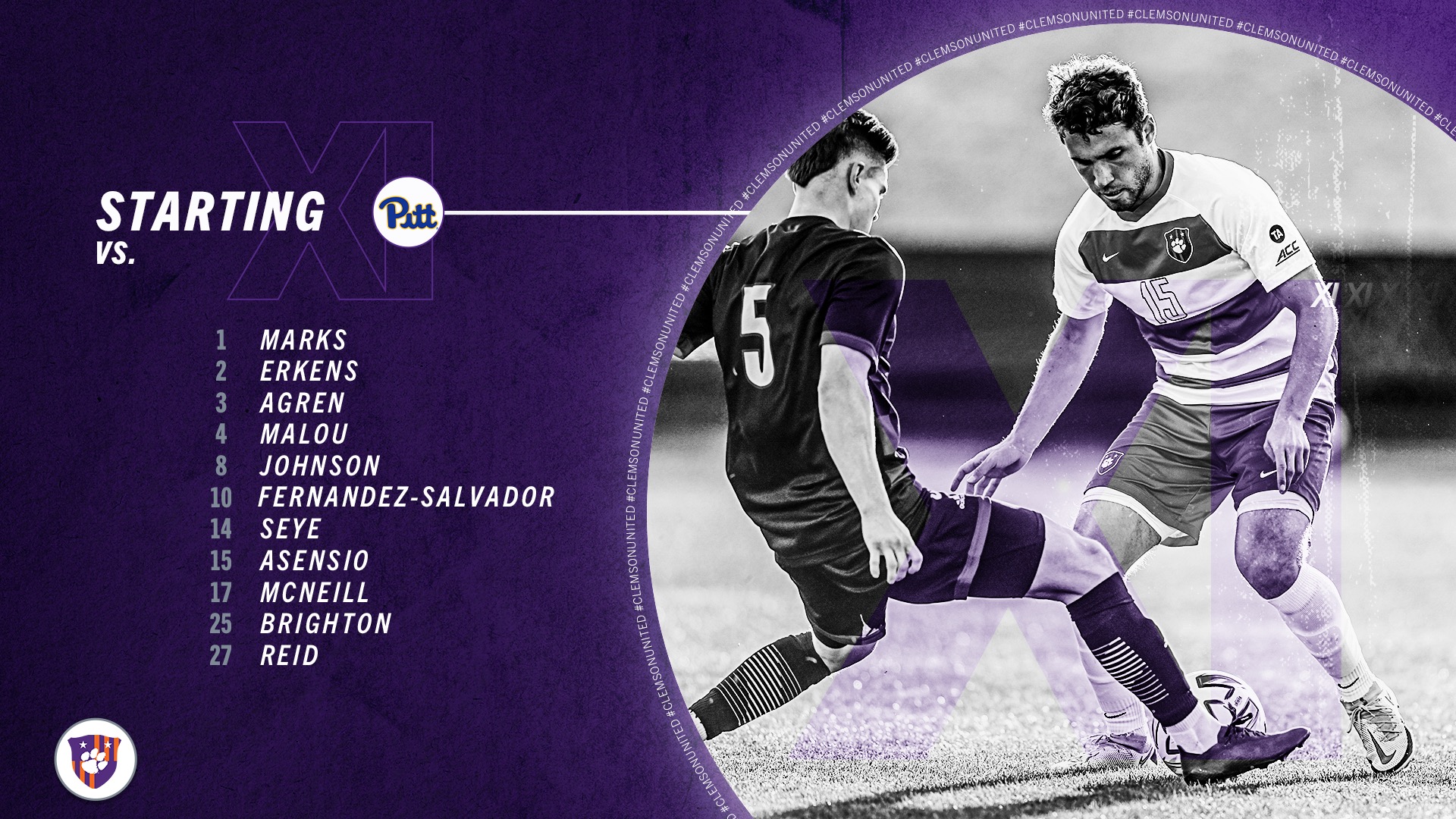 We will post lineup and key game day updates here.  Look for lineups to be posted at approximately 6:45 p.m.

Keeping an eye on other teams in Top 5 (with relevance to top NCAA tournament seeds), No. 2 Georgetown loses at home in Big East Championship game to Seton Hall, 2-1.  Could this knock Georgetown off the top seed line?

Another automatic bid goes to Seton Hall, who knock off No. 2 Georgetown.
The Hoyas are all but likely to earn one of the 14 at-large bids in NCAA tournament. https://t.co/Gg8RPkyYPy

Meanwhile, Penn State equalizes vs No. 3 Indiana, who are now playing with 10 men.

Liam Butts ties this game at 1-1 with just over eight minutes to play!! Seth Kuhn and Andrew Privett with the assists. pic.twitter.com/Kw6GO0kw2H

No. 1 ranked Pitt men’s soccer team travels to Clemson, S.C., for a pivotal matchup with No. 4 Clemson Saturday evening at 7 p.m. for a chance to claim the Atlantic Coast Conference’s NCAA automatic qualifying berth.

The winner of the match automatically qualifies for the NCAA Tournament.

The NCAA Selection Show is Monday, April 19 at 12 p.m. and first round action of the NCAA Tournament begins April 29. All NCAA Tournament games will be held in Cary, N.C., or the surrounding Cary area.

On Friday, we published a more in-depth breakdown of the match-up.

And, if you still wanted a top-notch scouting report of Clemson, you can always still refer to Mark Goodman’s piece prior to the match in November as a reference point.

–        Clemson enters the contest as the Atlantic Division Champions out of the ACC, finishing with a 12-3-2 overall record and 7-3-2 conference mark.

–        The fourth-ranked Tigers are second behind the Panthers for total goals in the ACC this year, totaling 30 for fifth in the country.

–        The three first team recipients – Grayson Barber, Philip Mayaka and Kimarni Smith – all moved on from the program following the conclusion of the fall season. Smith was taken No. 3 overall in the 2021 MLS Superdraft, while Mayaka was chosen immediately after him at No. 4. Barber signed a Homegrown Player contract with Sporting KC.

–        Leading the way on Clemson’s defense is Oskar Agren, who was named to the All-ACC second team. Agren has helped the Tigers register six shutouts this season.

–        Leading the Tiger attack is Callum Johnson, who has four goals, four assists and a .448 shot on goal percentage this year.

–        James Brighton is second on the team in total goals with five and leads the team with 36 shots and has tallied 17 shots on goal.

–        Head Coaches Jay Vidovich and Mike Noonan have a combined 659 wins. Noonan ranks 11th among active coaches in the NCAA with 346 victories, while Vidovich ranks 19th with 313.

–        The Atlantic Coast Conference released its annual All-Conference Teams Wednesday, April 14, and Pitt earned a school record 10 All-ACC honorees, three Player of the Year awardees and Coach of the Year.

–        Graduate student Jasper Löeffelsend was named ACC Defensive Player of the Year. Löeffelsend has cemented himself as one of the best passers in the country, totaling seven assists (1st in ACC/5th in country). His .50 assists per game ratio ranks second in the league. Löeffelsend, along with teammate Bertin Jacquesson, each tallied three assists at home against Virginia Tech, both of which tied for second in program history for a single game.

–        Freshman Bertin Jacquesson made an immediate impact when he arrived at Pitt in the fall, totaling nine points in his first three games. Jacquesson was honored by the ACC with Freshman of the Year. He has three goals, six assists, 27 shots and 13 shots on goal for the season.

–        For the sixth time in his illustrious career, Pitt head coach Jay Vidovich was named ACC Coach of the Year.

–        Vidovich has led the Panthers to a 13-2 overall record and 9-1 ledger in conference play. Pitt’s 13 wins is tied for second most all-time in school history and its nine conference victories surpassed the 1995 team that won eight Big East games for most league wins in a single year.

–        Jacquesson and freshman Filip Mirkovic rounded out the group with All-Freshman team honors.

–        Senior Alexander Dexter had a career performance at home against Virginia April 8, scoring a goal and tallying two assists in Pitt’s 5-0 shutout of the Cavaliers.

–        Pitt enters the Clemson match with the number one scoring offense in the conference with a 2.53 goals per game mark, a number also good for eighth in the nation.

–        The Panthers have totaled 38 goals this season, which leads the nation. Pitt also leads the country in total points (111) and is second in total assists (37).

–        Pitt’s 7.53 points per game mark and .552 shot accuracy rank first in the conference and ninth and third in the nation, respectively.

–        The Panthers have had 10 different goal scorers this season and have had 12 different players assist a goal this year.

After ‘feeling the pain’ of previous loss to Clemson, Pitt’s now ready for rematch
NCAA Tournament fields to be announced on Monday
Loading Comments...