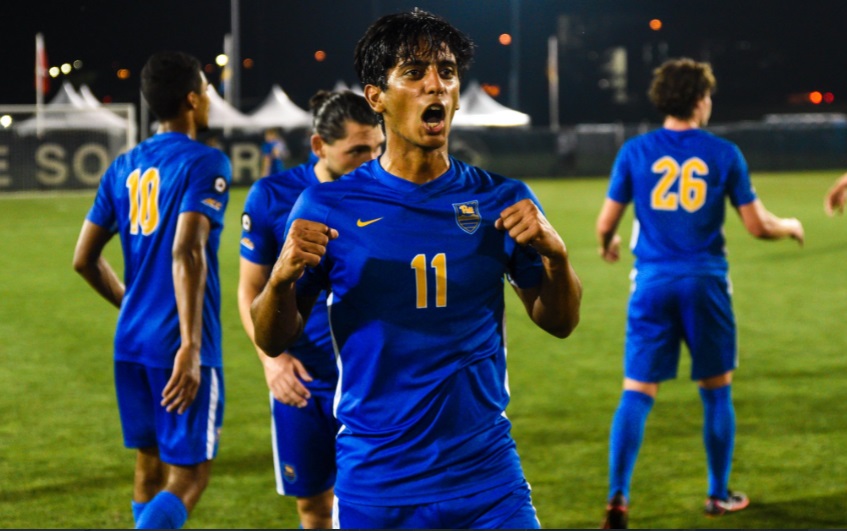 No. 15 Pitt men’s soccer team earned its first road victory of the season and its first at Penn State since 1966, with a 1-0 result at Jeffrey Field in State College on Monday night.

Intent on not surrendering an early goal on the road like they did the previous two weeks at WVU and Akron, Pitt came out on the front foot.

Staying hot was Pitt senior Rodrigo Almeida, who scored in the 6th minute with a clinical shot from the middle of the box after a terrific assist from Jasper Loeffelsend.

Almeida is on fire 🔥@Rodrigom26 is now the leading goal scorer in the ACC!

“I thought we did a very good job starting the match and finding the first goal,” Pitt Head Coach Jay Vidovich said.

“We were in control for most of the match. We kept the ball, pressed high and moved them but credit to Penn State who didn’t break when we got into their final third. I am very contempt with what we did and I am proud of the guys.”

The goal was Almeida’s team leading fifth of the season, while it was Loeffelsend’s sixth assist.

The Panthers remained in control throughout the first half, then early in the second half, goalkeeper Nico Campuzano made a few key saves to keep the clean sheet.

Pitt nearly made it 2-0 in the 58th minute as sophomore Filip Mirkovic struck a right foot shot to the upper left corner of the goal, missing just high. The Panthers outshot Penn State 8-3 in the second half and 16-5 for the match.

The Panthers defense held the Nittany Lions in check in the second half, allowing only three shots. Graduate student Campuzano totaled three saves for the evening, en-route to his 20th career win in goal as a Panther. He is now fourth all-time for career wins at Pitt.

Pitt saw out the victory by controlling possession for the final 20 minutes and defending superbly to keep most Penn State opportunities at a distance.

The Panthers (now 4-2 overall and 1-0 in ACC) return to conference play on Friday when they visit Wake Forest. Look for a more detailed recap and reaction to follow later in the evening and on Tuesday.

Look for starting lineups to be posted here along with in-game updates.

Another one — this time goes to Filip Mirkovic with the professional foul. Previous one went to Brandon Clagette with foul on left edge of box that gave PSU dangerous free kick (blocked by Pitt wall)

25′ — Pitt has really dominated the first half vs Penn State, but just one goal to show for it.

PSU absorbing crosses, bunch of corners and Pitt with plenty of possession in final third.

Our starting 1️⃣1️⃣ vs. Penn State

Pitt and Penn State will renew its rivalry on the soccer pitch on Monday with both programs fielding strong teams.  While Pitt is coming off a College Cup appearance and ACC Coastal Division title in the 2020-21 campaign, Penn State were right at the top of the Big 10 — finishing second to Indiana both in the regular season and then in the Big 10 Tournament.

Panthers are coming off an impressive 4-0 win at home Friday night against No. 3 North Carolina.

On the road this season, it’s been a different story for Pitt.  They’ve already faced tough tests this season and have come up short losing at both West Virginia (now ranked 5th) and at No. 19 Akron. In both road games they allowed an early goal, then fought back to get the equalizer but gave up a late second half goal.

Here was Pitt’s starting lineup on Friday vs UNC. We shouldn’t expect too many changes, though Head Coach Jay Vidovich may keep some guys out that are nursing a few knocks to have them ready for the next two ACC matches. The last time they met at Jeffrey Field, in 2019, Penn State came away with the win.

–        One of Pitt’s oldest rivalries in not only men’s soccer but athletics as a whole, the Nittany Lions lead the all-time series 24-7-3.

–        Penn State enters the contest 3-1-1 overall and is receiving votes in the most recent United Soccer Coaches Poll.

–        The Nittany Lions have wins against Syracuse, American and Penn, a tie vs. George Mason and a loss to West Virginia.

–        Junior Andrew Privett leads the team with seven points, scoring three goals and tallying an assist. Privett has scored a goal in each of his last two games.

–        The Panthers responded from the Akron loss with a big win Friday, Sept. 10 at home against No. 4 North Carolina, defeating the Tar Heels 4-0 in both teams’ ACC opener.

–        Senior Rodrigo Almeida scored twice – his first multi-goal game of his career – while Veljko Petkovic and Valentin Noel each recorded a goal.

–        Junior Veljko Petkovic has flashed his offensive abilities early this season, totaling four goals and four assists, both of which lead the team.

–        He recorded his third goal of the season against Lehigh, aiding the Panthers to a 2-1 victory over the Mountain Hawks.

–        Petkovic tallied his second multi-assist game of the season with two assists at home vs. No. 4 North Carolina while also scoring his fourth goal of the season and first game-winner of the year.

–        He was named ACC Offensive Player of the Week Aug. 31 and earned College Soccer News and TopDrawerSoccer Team of the Week honors Sept. 1.

–        The Panthers remain on the road for the second of three-straight as they take on Wake Forest in Winston-Salem Friday, Sept. 17.