In the first half of Pitt’s match at Clemson on Friday evening, the same frustrating script once again reared its ugly head for the Panthers on the road.

The Tigers came out pressing and took control in the early stages of the match.

Despite lofty expectations heading into the season, including a No. 3 preseason ranking and being picked to win the ACC, the Panthers were on the precipice of falling to a 4-4 overall record and 1-2 in conference play.

The Panthers were having difficulty adjusting to its opponent and connecting passes.

There were a few key missing pieces for Pitt at the beginning of the match, namely Jasper Loeffelsend, Bertin Jacquesson and Alexander Dexter were out of the starting lineup. Having built a squad with quality depth and proven experience, the standard for the Pitt program under Jay Vidovich has elevated to a point where they’re fully confident in the ‘next-man-up’ approach in response to injuries and having players out for various reasons.

Vidovich and his coaching staff have been working different players in and out of the starting lineup, going deeper into its roster. The experience of having played a 21st Century Model season in 2020-21 (playing competitive matches in both the Fall and Spring, which Vidovich and many other college coaches hope to see soon on a permanent basis) helped provide Pitt with invaluable opportunities to get more players quality playing time.

Despite all of this, once again — on the road — Pitt was having difficulty playing the ball out of the back, struggling to generate chances and getting into the attacking third.

Among the players introduced to the starting eleven on Friday at Historic Riggs Field, where the Panthers have never won, included Matt Bailey, who’s been a part of the program since 2019, on the left wing, Brazilian freshman Guilherme Feitosa as one of the deeper, central mids and Brandon Clagette, in the left outside back spot, typically patrolled by 2020-21 All-American Jasper Loeffelsend. 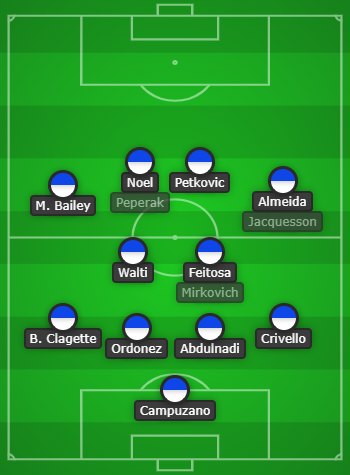 The Tigers brought pressure, but the Panthers didn’t crack.

In three road losses this season at Akron, West Virginia and Wake Forest – the Panthers gave up first half goals, then fought back furiously, but came up short.

Against the team that beat them out for the ACC Tournament title and conference’s NCAA automatic bid in 2020-21 season, Pitt stepped up with its best 90-minute defensive performance in the past couple of seasons.

It wasn’t always pretty, but they were consistent in blocking channels and quickly rounding into solid defensive shape and for the most part, kept Clemson from creating anything dangerous inside the box.

In the first half, the Tigers outshot the Panthers 8-2 but had just one shot on frame resulting in Nico Campuzano’s only save of the match.

A few weeks ago, after losses to West Virginia and Akron, in hostile environments, Jay Vidovich provided a straightforward approach to playing better against good teams on the road.

Sure enough, the Panthers got to halftime at Clemson being outplayed but they didn’t concede in the first half – marking an important checkbox of game objectives to getting a result away from home.

With a chance to get reorganized at the half, Vidovich, who previously dealt with 1-0 deficits in Pitt’s previous three ACC postseason matches vs Clemson on the road (or at neutral sites), had to be encouraged.

Pitt made some subtle changes – one of those included bringing Filip Mirkovic off the bench in place of Guilherme Feitosa. While Feitosa had some moments of individual brilliance on the ball, Mirkovic’s vision and composure on the ball helped the Panthers start to gain the possession edge in the match and give Jackson Walti, the other holding midfielder, more freedom to push forward a bit more when opportunities presented.

As a result, late in the first half, then early in the second half, Pitt started to show a bit more patience and began to play the ball out of the back with more confidence as they settled more into the match.

They also didn’t have the burden of chasing the match and playing from behind.

Then they took command of the match.

First, on a quick transition forward in the 59th minute, Petkovic found space to burst forward into the final third, drawing the attention of both of Clemson’s center backs.  This left Bailey – who was making his run as a left side option – open on the left edge of the box.

With Clemson’s defenders scrambling and goalkeeper George Marks slightly out of position, the  senior from Maryland sent a ball to the far post area that somehow snuck its way inside the right post and into goal.

Valentin Noel was making a run to the far post, appearing to be in position to knock it in, but that wouldn’t be necessary.

Bailey has been a solid player for Pitt during the past three years, but his playing time has decreased with the added talent on the roster, but in this start, he made the most of his chance.

Suddenly, for the first time in the past four meetings with Clemson (the previous three which came in postseason matches), Pitt held a lead.

In the past couple of seasons, Pitt has been unbeatable once they hold a lead, going 21-0 when the score the first goal.

The Panthers found another goal in the 68th minute, as this time it was Noel who emulated Petkovic’s advance into the center of the attacking zone.  This time, Noel opted to flick a ball over the last defender, finding Bertin Jacquesson, who only came into the match moments earlier.

Pitt’s French connection came through to double the lead.

The French Connection 🇫🇷@Vlnt_Noel finds Jacquesson for the second goal of the match.

As previously pointed out, this wasn’t the prettiest of 2-0 victories, as Pitt found ways to slow down and frustrate the Clemson attack.  One of those included taking strategic fouls.  In this match, the Panthers were called for 14 fouls, including a few near the edge of the box which led to the Tigers getting some free kick chances from fairly close range.

Each time, the Panthers’ defended well in the box.  Unlike the previous road losses there weren’t any signficant defensive lapses.  Arturo Ordonez was a beast in the box and his counterpart, Mohammad Abdudani, took care of their battles as did the outside backs throughout the night, with the exception of pulling and tugging on Clemson when they felt they might be compromised at times.

On this night — it worked and Clemson would have to settle for shots from distance, free kick attempts and just three corners.

The Panthers finally beat Clemson and lifted the burden they’ve been carrying that they can’t win on the road.

Now, positioned with a 5-3 overall record and 2-1 in ACC, with what looks — on paper — like the toughest part of their schedule behind them, the Panthers look tohave their sights set on winning its second consecutive Coastal Division title, its first-ever ACC Championship and getting another high seed in the NCAA tournament.

When they elevate their game the way they did on Friday, the sky is the limit for this team.