Without a win since May 14, the Pittsburgh Riverhounds SC returned home hoping to turn things around.

Instead, things went from bad to worse, as the Hounds were dealt their third straight loss, this time in humbling fashion, 5-2, to the Tampa Bay Rowdies, at Highmark Stadium on Saturday night.

Arturo Ordonez’s goal in the 11th minute gave the Hounds the early lead, but that lead evaporated quickly, as Tampa Bay exploited Pittsburgh on the counter, with goals coming from Kyle Greig, Leo Fernendes and Jake LaCava.  Fernandes added another in the 59th minute, and Lucky Mkosana capped Tampa’s scoring surge in the 64th minute.  Russell Cicerone scored in the 77th minute to cut the lead.

Ordonez’s goal was set up by solid build-up, initiated by Russell Cicerone on the right side.  Cicerone sent a hard, low pass in the middle of the box for Alex Dixon, who found the rookie on the right edge of the box.

It was Dixon’s 30th career assist in the USL Championship.

He's the sixth player to have at least 40 goals and 30 assists in the league's history. #HOUNDTAHN #PITvTBR https://t.co/hXwHEnpysY

The Rowdies picked apart the Hounds with five unanswered goals, three coming in the first half, then another two in the second half.

With the loss, the Hounds (7-6-3, 24 points) are now winless in their last six matches, dating back to May 14, when they defeated El Paso, 1-0, at Highmark Stadium.  This was Pittsburgh first loss at home this season.

90+’ – In the final minutes here, Castaneda goes in for the two goal scorer Leo Fernandes.

77′ – Tampa Bay makes three subs in their midfield: Guenzatti, Etou and Tejada in for Dalgaard, LaCava and Ekra. Hounds make two subs: Sims and Argudo in for Angelo Kelly and Forbes.

76′ – Hounds get one back! Cicerone finishes a rebound in the box after a few crosses. 5-2 Tampa.

73′ – Ordonez gets a yellow card for going up to win a header.

64′ – Lucky Mkosana does the same thing as Fernandes as he finishes a shot left footed off the right post and in. 5-1 Rowdies now. Some of the worst soccer we’ve ever seen the Hounds play. They’re in a rut.

Since Bob Lilley's been Hounds' coach (2018-present), can't think of a time they've ever trailed by more than two goals at home. And two-goal deficits at home have been super rare too. #PITvTBR

58′ – Wow, what a goal from Leo Fernandes. He absolutely silences the crowd here in Pittsburgh. Fernandes juggles around the defense and scores a beauty with his left foot. 4-1 Rowdies.

54′ – Rowdies make their first sub. The veteran Mkosana subs in for Kyle Greig at striker.

52′ – Dikwa with a shot in the box blocked by the chest of Cochran in net. Good buildup pass from Forbes to Wiedt there to make that happen.

46′ – Second half has begun here at Highmark. Shane Wiedt is in for Jelani Peters. Ordonez has moved back to CB and Wiedt has moved over to RB. Still 3-1 Rowdies.

Left ourselves with a bit of a hole to dig out of, but we know that's do-able at Highmark!

45′ – One minute of stoppage time added after a few Rowdies players were down.

42′ – Rowdies 3-1. Riverhounds just completely vulnerable on the counterattack. LaCava taps in an easy goal. Going to be tough for the Hounds to come back now.

28′ – Leo Fernandes almost scores another. Again, a great ball into the Hounds box. This game has been entertaining, that’s for sure.

21′ – Ekra plays a great chip over the backline to the foot of Leo Fernandes and just tips it by Silva. Silva slipped… if he didn’t then it’s probably still a tie game. 2-1 Rowdies. Tampa is moving the ball well now.

13′ – HOUNDS GOAL!! Cicerone beat a man down the left side, passes it to Dixon in the box and Dixon lays up Ordonez for the finish! The Spaniard with his left foot beautifully finishes it in the top left corner. 1-0 Riverhounds!

7′ – Leo Fernandes involved on the rush makes a pass to the open LaCava but the pass should’ve been made into space. Dossantos defends well and earns the goal kick.

Here's our squad to start out tonight in Pittsburgh, pres. by @SHRTampa. 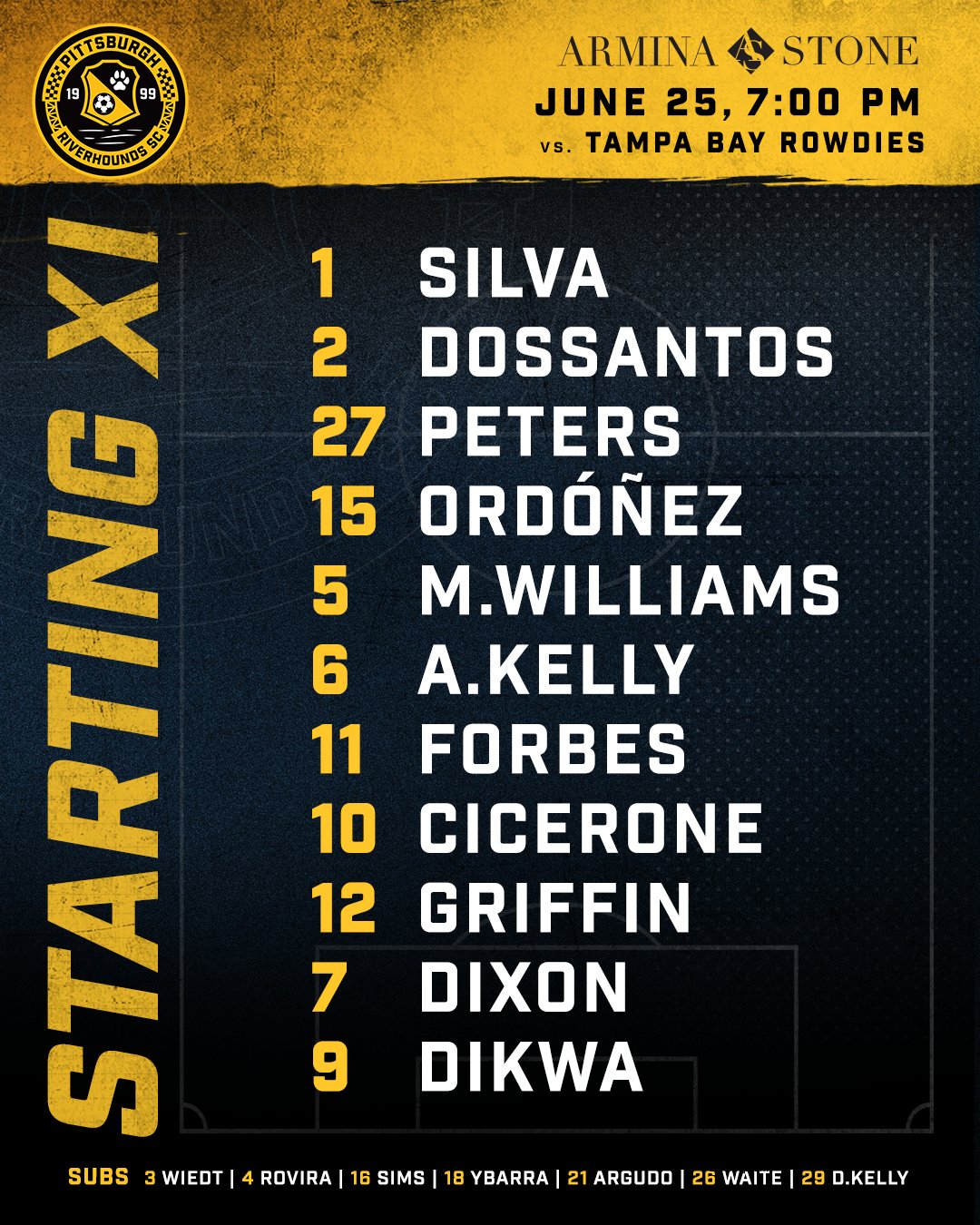