Leading the attack for the Panthers, Bertin Jacquesson delivered a goal and an assist, and was a constant nuisance for the Hoyas throughout the match, while goalkeeper Joe van der Sar made four saves as the Panthers withstood some dangerous moments while holding the lead, especially in the second half.

The win was Pitt’s first against Georgetown since 2006, when the two schools were Big East rivals.

The match started with a flurry, as Georgetown got the scoring started in the 5th minute when they took advantage of their first corner kick opportunity.

Georgetown stuck first scoring as Kenny Nielsen converted off a skipping cross through the box near the top of the six 4:29 into the contest.

Pitt countered in impressive fashion as Jacquesson carried down the right wing on the ensuing kickoff. His right foot strike from just outside the 18 deflected off a Georgetown defender at the point of contact, spinning the ball into the far corner of the net for the equalizer just 19 seconds after the opening goal.

4’ | WHAT A RESPONSE!@BertinJacquess4 opens the scoring account for the Panthers 19 seconds after the Georgetown goal.#H2P pic.twitter.com/NS1Pkf7tex

Jacquesson continued to pressure the Georgetown defense with threatening runs from the wing. With 10:50 gone by the junior forward charged down the right side, stopped on a dime to free himself from a defender and send a crossing ball to a slashing Valentin Noel just inside the 18. Noel fired a one touch rocket over the Georgetown goalie into the upper part of the goal for a 2-1 Panthers lead.

The run of play fluctuated throughout the final 45 minutes of action with van der Sar coming up with a pair of big saves to secure the lead. In the 59th minutes the senior keeper made a diving save off a deflected shot from just outside the six. He delivered again in the 73rdminute with stabbing right hand deflection off a Georgetown flick off a bounding ball near the penalty hash.

Georgetown appeared to receive a golden opportunity in the 83rd minute with a penalty kick call.

Upon referee review it was determined the foul initiated outside the box and the Hoyas received a free kick from just outside the 18. The Pitt defensive wall proved to be stout with a block of an initial attempt and a clear of an ensuing corner.

Georgetown continued to push forward while Pitt defense remained disciplined and solid in its tackling at the point of attack over the final seven minutes of action. The Panthers smothered a pair of corners in the final two minutes of action and put the game to bed when van der Sar shadowed a soft header off a long cross over the crossbar and into a free kick in the closing seconds.

Thank YOU, Panthers for being a part of a program-record, capacity crowd of 2,000❕

See you Monday for the Brawl 📆#H2P pic.twitter.com/c1zinVBjRI

Look for starting lineups, commentary and key match highlights to be posted here

89′ – Pitt conceding another corner to Georgetown, who now hold a 9-2 edge on those set pieces.

Match held up now due to injury, as Jackson Gilman is shaken up.

Ensuing corner, van dar Sar comes to near post to punch it away.

84′ – VAR replay needed but Leerman foul was on edge.

G-town’s free kick from Aidan Rocha is deflected off Pitt wall, and ensuing corner is cleared.

Panthers continue to hang on to 2-1 lead.

82′ – Panthers knocking on the door — with another counter chance but Filip Mirkovic can’t beat G-town keeper Koehler to ball after shot initial shot gets away from him.

74′ – Van dar Sar with an amazing, quick reaction save to deny another deflected shot!

70′ – Pitt forward Luis Sahmkow somehow gets a shot off with a defender all over his back, but it’s turned away by Georgetown’s Ethan Koehler.

62′ – Pitt on counter, and Noel has the keeper Ethan Keohler to beat on the left side, but shot attempt is denied after he loses balance trying to make a move in goal box.

60 – van der Sar with another nice quick reaction save to deny Georgetown’s Kieran Nielson’s attempt with was also deflected off a Pitt defender.

No surprise that this place is packed and very lively tonight…@Pitt_MSOC pic.twitter.com/4DB7iHsH57

47′ – Georgetown gets the first real good chance of second half as Jack Panayoutou’s free kick is saved by Pitt’s Joe van der Sar, who alertly stayed home guarding the back post.

Here's how the Panthers have lined up tonight. Same formation, with some new faces (mostly grad student transfers and one true freshman – Jackson Gilman – in the XI)#H2P pic.twitter.com/Au3sv8pk1x

Val Noel with his first of the year — on the end of terrific build-up on left side and ball in from Bertin Jacquesson. Panthers now lead Hoyas 2-1

Bertin Jacquesson’s cross from right side is deflected and it goes in! What a blazing start here at Ambrose!

Not too many surprises.  As expected, most of the returning guys are in the starting XI.

One true freshman in there, Jackson Gilman, out of Philadelphia Union Academy, gets the nod at Left Back. 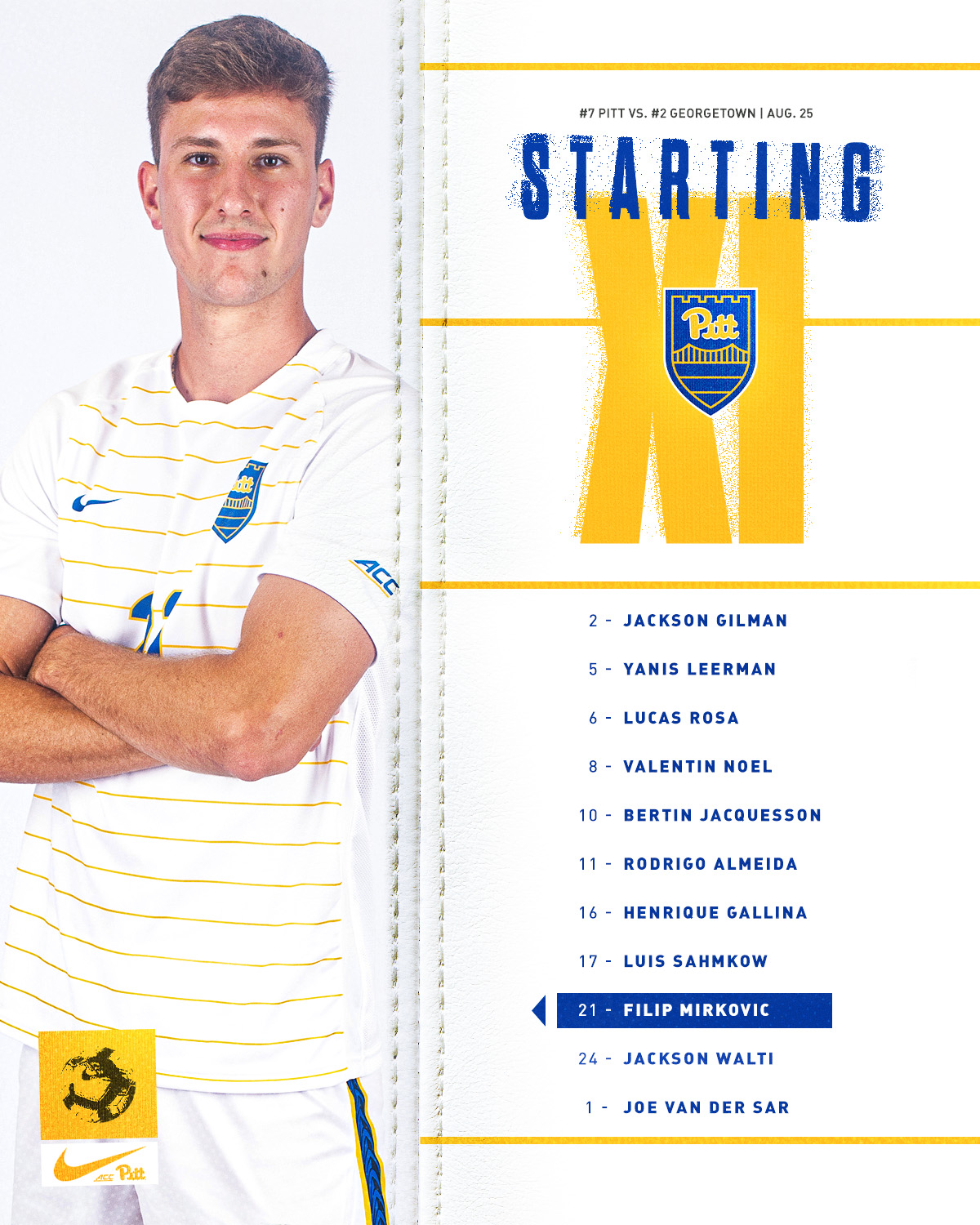 Coming off of their second straight Elite Eight appearance, the No. 7 Pitt men’s soccer team opens up their 2022 campaign Thursday night against No. 2 Georgetown at Ambrose Urbanic Field. First kick is set for 8:00 pm and the game will air live on ACC Network Extra with Kevin Wheeler and David Day on the call.

Thursday’s top-10 matchup will be the second game of a doubleheader on the Panthers’ home turf as the Pitt women play host to UMass at 5:00 pm in their home opening match.