The Riverhounds-City Islanders provided plenty of drama in their first three matches this year.

Pittsburgh Riverhounds (10-9-8, 38 points) vs Harrisburg City Islanders (11-10-6, 39 points)
Saturday, September 19
Skyline Sports Complex, Harrisburg, Pa.
Kickoff – 7 p.m.
Fans will be able to watch the action as it unfolds on www.Riverhounds.com
Follow PIttsburgh Soccer Report’s John Krysinsky, who will be in Harrisburg, for all game updates on Twitter @johnkrysinsky.
CITY ISLANDERS – AT A GLANCE
Harrisburg boasts a 6-3-4 record at home this season with those defeats coming against playoff qualifiers Charleston, the New York Red Bulls II and Louisville City.   Islanders games have resulted in a USL high 99 goals with 25 of those coming in the three previous Keystone Derby games.
The Islanders’ defensive record of conceding 51 goals is the poorest in the Eastern Conference. Only Arizona United’s back line has been breached more often.  Harrisburg’s offense ranks fifth overall in the USL with the attack being boosted by recent 6-0 and 5-0 wins over F.C. Montreal. German-born forward Plumhoff leads his side with 10 goals and six assists.
The City Islanders have reached the USL Playoffs in each of the last five seasons and made it all the way to the USL Championship Game last year as a low seed.
THREE PREVIOUS ENCOUNTERS (INCLUDING TWO EPIC COMEBACKS!)
Match #1 – March 28 – Hounds Come Out Flying
Hounds set the tone for a high-scoring season and Steffens’ tenure as head coach with a commanding 5-2 win over Harrisburg at Highmark Stadium on March 28 that was inspired by Kevin Kerr‘s hat trick.
Match #2 – May 30 – “Miracle on the Mon”
One of the greatest games in American soccer history took place May 30 when the Islanders traveled to Western Pennsylvania again for the second leg of the series.
Harrisburg led 3-0 at halftime and held a 5-3 lead with fewer than five seconds of regulation time remaining when Hounds captain Danny Earls cut the deficit to one.
Rob Vincent blasted a piledriver of a free kick into Nick Noble‘s top corner to tie the game in the first added minute before Kerr coolly stroked a shot past the Harrisburg goalkeeper to cap a sensational comeback. Harrisburg launched an incredible turnaround of their own at the Skyline Sports Complex on July 26 to pull out a 4-3 win despite being two goals and a man down with 20 minutes remaining. Jason Plumhoff struck the final blow one minute into added time to prevent the Hounds from clinching the inaugural Keystone Derby Cup.
GAME STORYLINES
You really can’t write a better script than this.  This is how the Pittsburgh Riverhounds and Harrisburg City Islanders will conclude a 28-game professional soccer regular season grind.  They will meet for the fourth time on Saturday evening in a match that will decide the outcome of their seasons.
Having already played three times, resulting in two epic come-from-behind victories, with 25 total goals, Pittsburgh holds a 2-1 series edge as they play one more time with an opportunity to advance to the league playoffs, while a loser in this match will see their season.  In addition, the Keystone Derby will also award a new trophy (The Turnpike Cup) that goes to the victor of the season-series (more on the scenarios for this -see below).
A win for the Hounds at Harrisburg’s Skyline Sports Complex Saturday night will lift Mark Steffens’ side to at least sixth place in the Eastern Conference and guarantee a playoff spot. Anything less and the season is over.
Harrisburg can also secure its place in the postseason with three points. Defeat is terminal. A tie leaves the Islanders nervously awaiting the outcome of the Charlotte Independence’s trip to the Charleston Battery to see if they will sneak in. Harrisburg trails the sixth-placed Independence by one point in the standings. Bill Becher’s side holds the head-to-head advantage over Charlotte should the teams end the season tied on 40 points
The USL Eastern Conference standings going into this weekend’s final round of games (from USLsoccer.com).
ROSTER UPDATES / INJURIES
There are no new injury concerns for Steffens following Wednesday night’s 1-1 tie with the Rochester Rhinos. Recently signed defender Ben Newnam sat out the Hounds’ final home game to give his strained calf a few extra days to heal. Stephen Okai and Fejiro Okiomah lined up on the substitutes bench against the Rhinos after recovering from their respective lower leg and Achilles tendon issues.
Sterling Flunder is available for selection after serving a one-game suspension in midweek leaving Ryan Thompson as the only expected absentee. The Jamaican national team goalkeeper is still recovering from a left knee problem picked up playing for his country in this summer’s Concacaf Gold Cup tournament.
TURNPIKE CUP ALSO AT STAKE 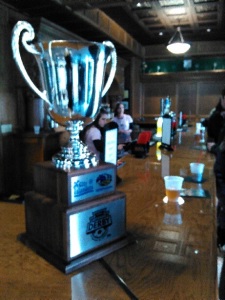 Will the new Turnpike Cup return to Pittsburgh? The Hounds will have to lose by 3 goals to surrender the cup.

Saturday’s contest will also see the inaugural Keystone Derby Cup being presented to the victorious team at the conclusion of the game. Pittsburgh currently leads the series by six points to Harrisburg’s three.
An Islanders win will leave the teams tied overall. The following tiebreakers will be used to determine the winner in the event of both teams finishing level on points:
1)   Goal differential from the four Keystone Derby games.
2)   Away goals scored during the four contests.
3)   Final USL standings.
Harrisburg will need to win by a 3-goal margin to wrestle the trophy from the Hounds’ grasp.
WHAT TO EXPECT
No lead is safe.
I’ll repeat.
No.
Lead.
Is.
Safe.
In a series that has produced 25 goals in three games, with lots of poor defending, but so many incredible moments already, this will likely be the most tightly contested match of them all.   And so, the first goal could be pivotal.  There’s just too much at stake – right?   The Riverhounds have been playing much better defensively over the course of the past two months, then they did when they were the league’s top scoring outfit.  They lost three games in a row in late July culminating with the 4-3 loss at Harrisburg, but since then they have ridden a very “results-oriented” eight game stretch going 3-1-4, surrendering only seven goals.
Harrisburg have feasted on the teams below them in the standings – dominating Montreal twice recently and they seem to have stepped up their attack.
Both teams are also playing on a quick turnaround.  Legs will be heavy.   On May 30, each also had to play after Wednesday U.S. Open Cup games, and it showed in the poor defending, especially by Harrisburg, at the end of that match.
This week Harrisburg cruised to an easy win over Montreal, while Pittsburgh had to fight for 90 plus minutes against the league leading Rochester Rhinos on Wednesday.  Advantage – Harrisburg.
If one player made a difference that turned the tables on the series, it may have been Harrisburg’s Cardel Benbow, who came off the bench to give the Hounds all kinds of fits with his pace, and ability to get behind the back line, sparking a 10-man comeback on July 28.
For the Hounds, one guy to watch might be Amara Soumah, who has not played a ton of minutes this year, but was instrumental at forward/attacking MF in the last two games these teams played.
With many playing on heavy legs, substitutions will be instrumental.   Steffens didn’t use veterans like Flunder, Okiomah, Okai or Newnam on Wednesday, so he has some options that he can go with – and should feel good about the depth at his disposal.
I can’t begin to predict the outcome of the match.   Both teams have been very unpredictable this year.    Even with Harrisburg’s 5-0 win at Montreal they are still have conceded more goals (53) than they’ve scored (49) this year, while the Hounds have scored 10 more than they’ve surrendered (51-41).
Something tells me it will be a Hounds win, 3-2, on a late goal by a sub.
Here’s my projected starting eleven for Pittsburgh:
Calle Brown (GK), Willie Hunt, Anthony Arena, Sterling Flunder, Matt Dallman, Danny Earls, Rob Vincent, Kevin Kerr, Lebo Moloto, Max Touloute, Vini Dantas.
Referee: Luis Guardia
Assistant Referees: Michael Piercey, Ben Pilgrim
Fourth Official: Corson Fidler