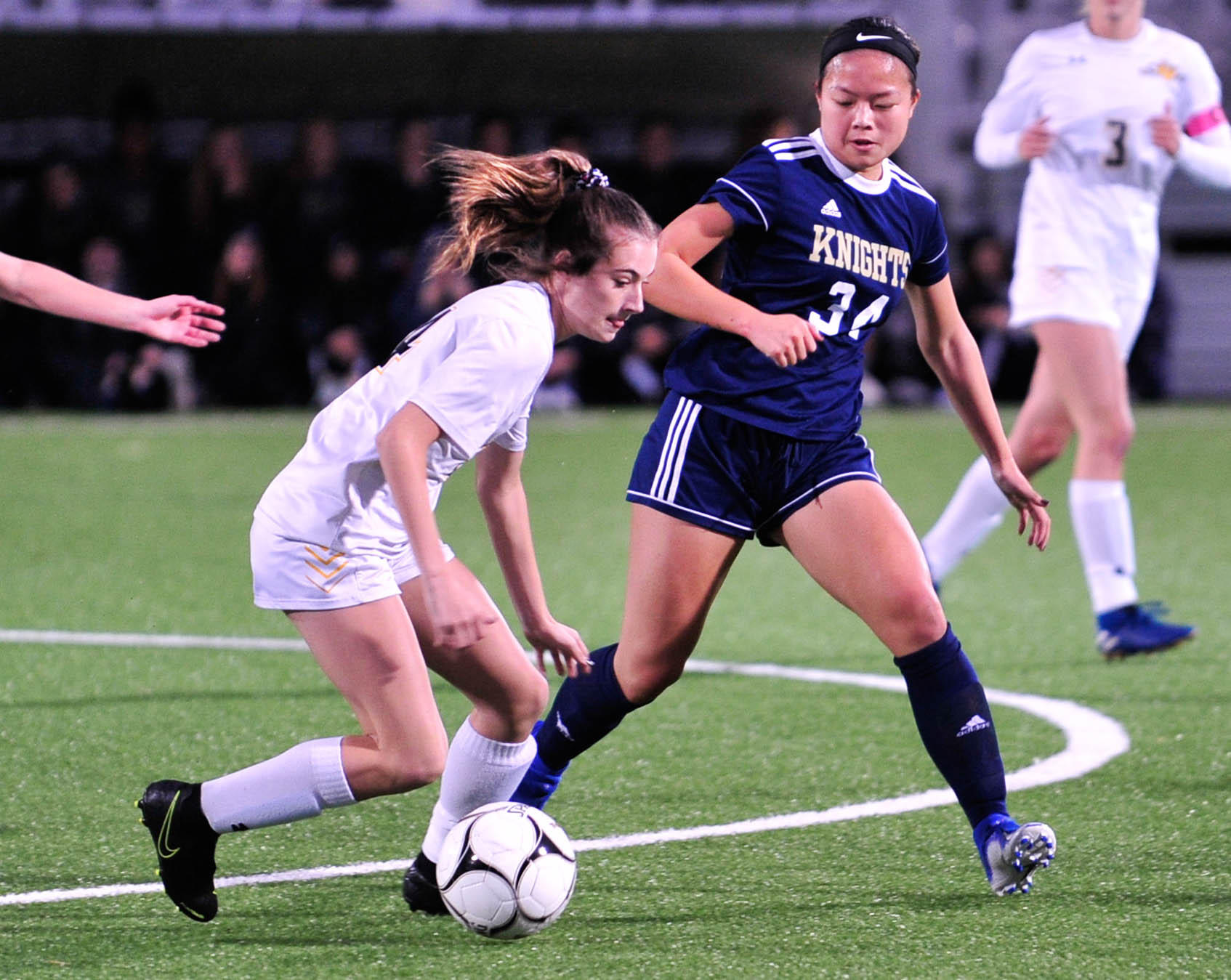 Making its first-ever appearance the WPIAL Girls Class 4A final, North Allegheny broke open a scoreless tie in the second half to surge past Norwin, 2-0, to capture the title on a windy Halloween night at Highmark Stadium.

Hannah Kirkpatrick and Sarah Schupansky scored for North Allegheny to give the Tigers its first WPIAL girls soccer title.

This game posed a match-up of styles and in the first half it definitely proved so.

Norwin looked to play long balls to forward (Pitt commit) Katlyn Kauffman to see if she could expose NA’s back four with her speed and get deep into the box.

NA would succumb to the style of play from Norwin and stay in the shape and look to posses the ball and move through the midfield looking for runs from Ava Ruppersberger, (Duquesne commit) Emma Bundy and (Pitt commit) Sarah Schupansky.

With the wind at their back Norwin was able to generate only 3 shots on goal. Never really testing NA goal keeper Madison Vukas. NA’s best opportunity was when Schupansky got a shot off from just inside the 18 yard box but her shot sailed over the crossbar.

Norwin’s best opportunity came when a deflected ball from Kauffman would find its way to Kennedy Soliday and she would send the shot wide of the goal.

Norwin would finally take a couple shots from distance as the clock was winding down but could not get them on frame.

North Allegheny came out and generated the first great chance when a ball slipped through towards Emma Bundy but Norwin’s goalkeeper Liz Waszkiewicz was able to slide and corral the attempt.

Just a minute later, technical touches in small spacing would reap rewards for the Tigers as Emma Bundy would slide a ball across the 18 to a wide open Sarah Schupansky on the back side.

Schrupansky didn’t hesitate for a solid finish to give North Allegheny the 1-0 lead just seven minutes into the second half.

The Tigers stayed on the front foot, continuing to pressure on Norwin’s back line and Waszkiewicz, with runs from Bundy, Ruppersberger and Schupansky would get into the final third but could not find the frame of the net.

Norwin settled down, turning the tables of the match to push for the equalizer, getting some balls forward.  Margan Sigut created a golden chance on a free kick toward the back post area of the six yard box, but Emily Shaw could not connect to put a quality shot on frame.

Norwin continued to apply pressure when Duquesne commit Maddy Rose struck a shot off the crossbar — which NA quickly reacted to to play the ball away from any further danger.

As Norwin pushed — North Allegheny adjusted its mindset, playing seven in the back forcing the Knights to work harder to create that final pass into the box.

In the dying moments, the Tigers stuffed out a Norwin advance, then got forward quickly on the counter.

Emma Bundy brought the attack into the attacking third, slotting a ball through for Hannah Kirkpatrick.

On this Halloween night — with the clock ticking away — Kirkpatrick put the nail in the coffin by driving her shot past Waszkiewicz for the to double the North Allegheny lead, 2-0, with just 1:30 left to play.

Check back here for more post-match reaction from Highmark Stadium.