This is part two in a series previewing Pitt Men’s Soccer’s before the ACC Tournament. For part one on the teams forwards, click here.

Pitt’s remarkable success in this shortened NCAA Men’s Soccer season is the result of a lot of things: focus and hard work by the players; attrition of a lot of excellent soccer players at other ACC schools; the exceptional coaching from Jay Vidovich and his staff; a small sample size that means 5 wins is enough to be the best in all the land.

But one could additionally make the claim that Pitt’s midfielders are the key to the brilliant run from the royal and gold.

Four midfielders have earned the bulk of the minutes for Vidovich’s squad – Veljko Petkovic, Valentin Noel, Filip Mirkovic and Jackson Walti. A fifth player, Matt Baily, has been the team’s big contributor off the bench. These players account for 9 goals and 5 assists. The rest of the teams 6 goals and 15 assists come from the forwards and the defenders.

That’s a reversal of what you’d generally see on a soccer team – it’s normal that the forwards score the goals and the midfielders do the setting up.

Pitt’s a little bit of an atypical team in that respect. It comes from their tactical approach. Vidovich has the 2020 Panthers playing something of a 4-2-2-2 formation this year, in which the forwards, Alexander Dexter and Bertin Jacquesson, play wide as wingers, while the midfielders are set up in a square box. 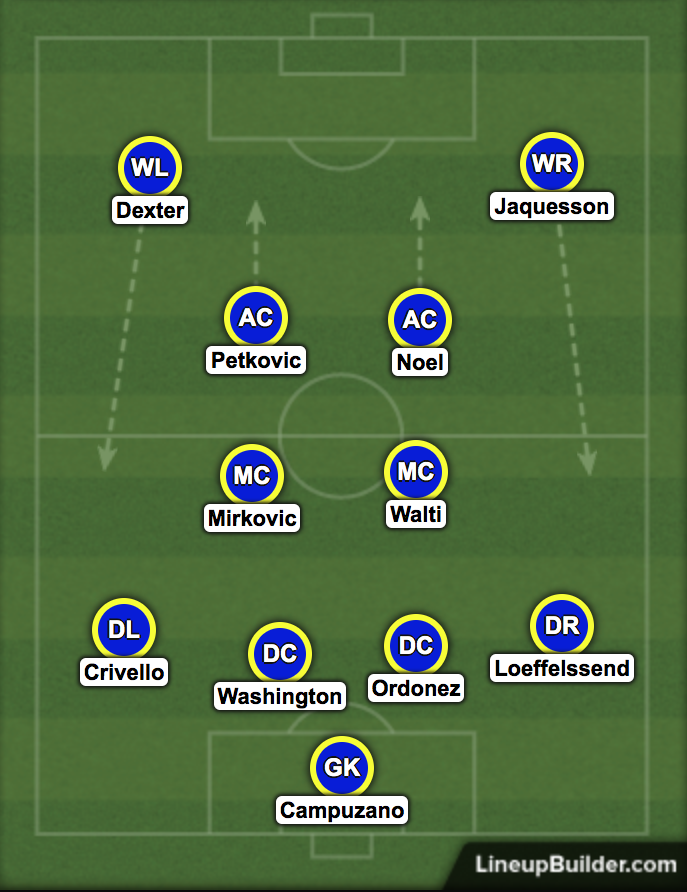 In attack, the defensive midfielders move the ball up to the attacking mids or wide to the wingers, and the Panthers flow ahead with three or four attackers breaking into the opponents half. It is the attacking midfielders that press the opponent’s backline and get into the most dangerous scoring spots, rather than the forwards. Additionally, the forwards are playing wide on defense, and drop back deep, while the front central mids are the ones harassing and pressing the opponent. They’re the ones that have the best chance at forcing a turnover in a bad spot, and as a result, stand the best chance of scoring off of a turnover. That’s why the midfielders have all the goals.

For American soccer fans, the 4-2-2-2 is a bit unconventional – you see it more often in the Bundesliga than in the US. It is the preferred system of New York Red Bull and indeed the entire Red Bull organization, which also includes Salzburg in the Austrian Bundesliga and Leipzig in Germany, although the Red Bull system employs a maniacal full-field, non-stop press. Vidovich’s guys will press, but not as fanatically as Red Bull. Pitt’s 4-2-2-2 is fluid enough that it looks like a 4-3-3 a lot, and indeed my boss, soccer savant John Krysinsky, called it a 4-3-3 in his piece looking at Pitt’s forwards. Vidovich will shift the shape and the formation from game to game, for sure, but I’m calling it a 4-2-2-2.

Those front two mids are Petkovic and Noel.

Petkovic, a Sophomore, is in his second year as a regular starter for Pitt. Born in Serbia, Veljko was raised in Queens, New York, and played club soccer in NYCFC’s academy. A skilled attacker with excellent vision, he’s capable of dribbling or accelerating out of trouble at any point on the field. His linemate at the front edge of the midfield square is Noel. After a two-goal performance against #5 Virginia, Noel became Pitt’s leading scorer this season with 5 goals, second in all of the NCAA except for Notre Dame’s Jack Lynn. Noel, a native of Niort, France, is also a Sophomore. Niort is hard to pronounce and has pretty castles.

The defensive side of Pitt’s midfield four is composed of another Serb, Freshman Filip Mirkovic, and Junior Jackson Walti. Mirkovic sits a little deeper typically on the field, tasked with receiving the ball in the early buildup out of the back and being ready to cut the passing lanes in the event of a turnover. Mirkovic’s no-nonsense defending and ability to close down attackers and snuff out an advancing attack isn’t going to get him an MVP award, but he does the subtle defensive work that keeps the ball out of the net.

Walti might be the most essential player on the team in that he is, to my eye, a classic number eight – he does a bit of everything. He defends, transitions, attacks; passes, facilitates, dribbles through the center; he directs traffic and controls flow. The team’s success often hinges on whether the opposition can get around him, control him, or outplay him. Usually, they can’t. Walti is in his third year with Pitt. The native of Switzerland came to the US for high school, and played at Monteverde Academy in Florida, a boarding school that’s long on top-notch athletes, and includes amongst its alumni NBA star Joel Embiid. Walti is one of three players for the Panthers to have played every minute of the 2020 season; the other two are goalkeeper Nico Campuzano and fullback Raphaël Crivello.

Those four players have started and played the bulk of the season in midfield. Getting two starts and a bunch of off-the-bench appearances is Senior Matt Baily. Baily transferred to Pitt from UMBC before the 2019 NCAA season. The 5 foot 7 Baily can plug in as a pacey winger or an attacking mid, and is a danger on the ball.

The rest of the Panther’s midfield is untested. Anass Amrani and Soshun Shigaki, two first-year players, each got 9 minutes of action during garbage time in Pitt’s 4-1 blowout of Louisville on October 23.  The rest of the players listed as mids for Pitt; Rodrigo Almeida, Louis Spicer, and Nathan Stricker; haven’t played at all this year.

Next up: John Krysinsky’s coming installment in this series on Pitt’s vaunted defensive team, due later this week.