It was a rough start to the season for the Riverhounds, falling to the Tampa Bay Rowdies, 3-0, at Al Lang Stadium on Saturday night as an old friend and former Hound, Steeven Dos Santos was instrumental in taking down his former team with the game’s first goal and he also set up the second tally by drawing a foul in the box.

The Hounds (0-1-0), struggled for much of the night to generate chances (out shot 13-6 and out possessed 63%/37%) against the reigning Eastern Division Champions.

“It was a good measuring stick for us. You’re not going to learn a lot more from a game than we did today,” Riverhounds SC Head Coach, Bob Lilley said.

HOW DID IT HAPPEN

Both teams exchanged possession and physical play in the first half hour,

Tampa Bay’s Laurence Wyke putting the first shot on target with a long-range effort in the eighth minute. Pittsburgh came close to breaking the deadlock seven minutes later, however, as newcomer Thomas Williamson’s free kick from 25 yards was just tipped over the crossbar by the Rowdies’ Evan Louro.

It was Tampa Bay who capitalized first, with former Hounds forward Steevan Dos Santo finishing a terrific cross into the box with a deadly header into the near post side to beat Danny Vitiello. After the Rowdies worked the ball from right to left 30 yards from goal, Leo Fernandes delivered a cross the Cape Verde forward headed home for his first goal in Tampa Bay’s colors.

Pittsburgh didn’t offer much after Williamson’s free kick in the first half, but the San Jose Earthquakes loanee also threatened early in the second half as he redirected a cross from the right by Jordan Dover just off target.

“We needed to connect more passes. We were caught on the dribble too much, and they were quicker in the match. I don’t think we played particularly well, and we had a lot of turnovers on the ball. We didn’t do good in transition moments, either, getting to the second ball,: Lilley said. “But Tampa was sharp, and we knew they would be coming off a 3-0 win last week against Charlotte. They forced us into a lot of longer-type balls.”

Dos Santos continued to haunt his former team, in the 74th minute, by drawing a foul when attempting to play a ball in the box, as Vitiello clipped the veteran from Cape Verde.

To add salt to the Hounds’ wound late in the match, the Rowdies added a third goal when there was a miscommunication between Vitiello and center back Mekiel Williams which allowed Jordan Adebayo-Smith to tap into an open net.

For the Hounds, it’s back to the drawing board, with 31 games left in the season, they’ll draw what positive they can, and move on to the next game.

“I thought our reserves came on and gave us good energy when they came on. We had a couple of good chances in the second half. Tommy (Williamson) made a good run into a very dangerous space, and (Jordan) Dover hit a good cross from the right. Alex Dixon got in behind once for us. For me, being level at halftime or getting level early in the second half, maybe we could get something out of this match. But Tampa was definitely better on the day.”

Tampa Bay (2-0-0, 6 points are now sitting atop the Atlantic Division standings, along with Hartford Athletic, who the Hounds will meet next Saturday. 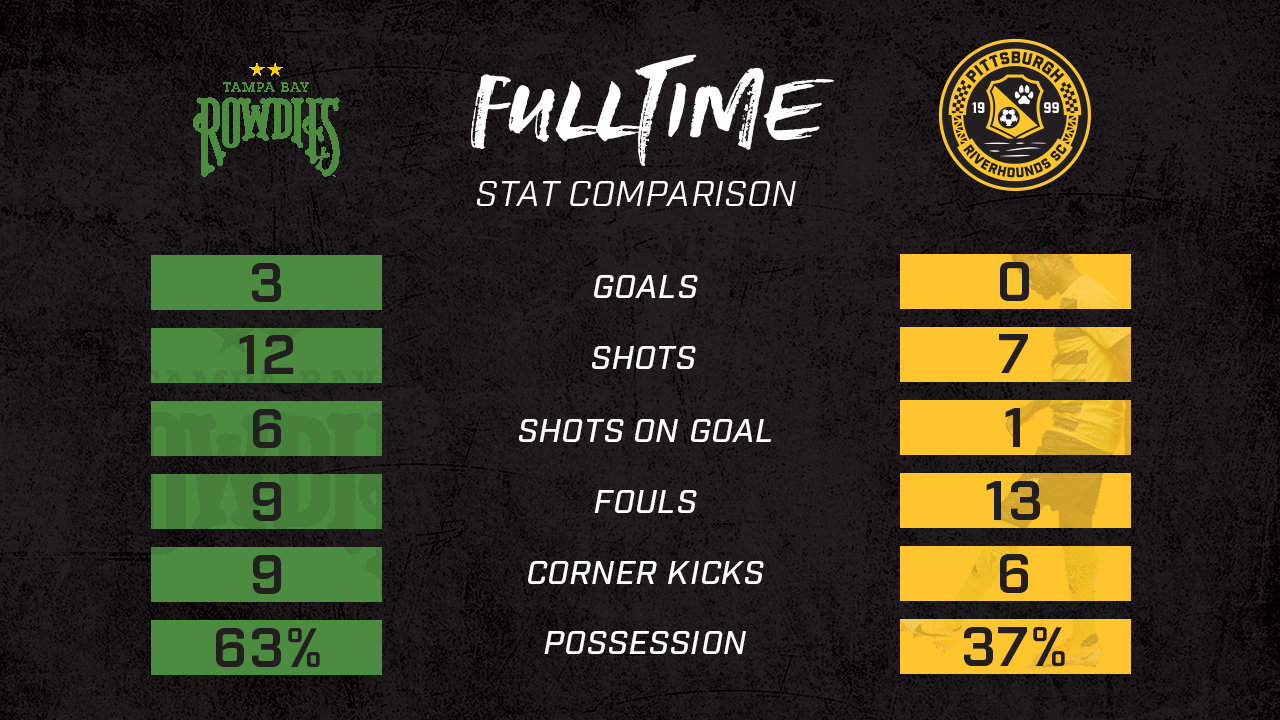 89′ — Adebayo-Smith almost scores again getting behind everyone but VItiello with a great save to deny the chip opportunity.

Did you know a leading industry is fish processing?#TBRvPIT #RiverhoundsSC

Go on young man! Adebayo-Smith with his first goal as a Rowdie. 3-0 pic.twitter.com/3AguyJHMYe

Miscommunication between Vitiello and Williams allows Adebayo-Smith to tap into an open net.

80′ – Hounds whip a corner kick into the box, but Williams is called for handling in the traffic in the six.

68′ — Dixon splits the center backs and tries to touch it around the keeper, but Scarlett recovers in time for Tampa to slide and win it away.

47′ – Oh so close! Dover crosses from the right to Williamson, and his effort loops just over the bar!

Really? These are the Riverhounds? Barely any possession and a defense like melted cheese.

41′ – Dixon has the ball fall to him after a half-cleared corner, but his volley attempt from the 18 sails over the bar.

It had to be. The former Hounds forward scores his first goal in @TampaBayRowdies colors in front of the supporters section. #TBRvPIT #TogetherRowdies https://t.co/qFnxa5ZA75

Biggest surprise from Hounds starting XI is that Tommy Williamson, first round draft selection of San Jose Earthquakes, will get the start at the top of the attack.

Look for starting lineups to be posted here at approximately 7:15 p.m. EST along with gameday updates.

Here’s the Riverhounds first starting XI of the year… 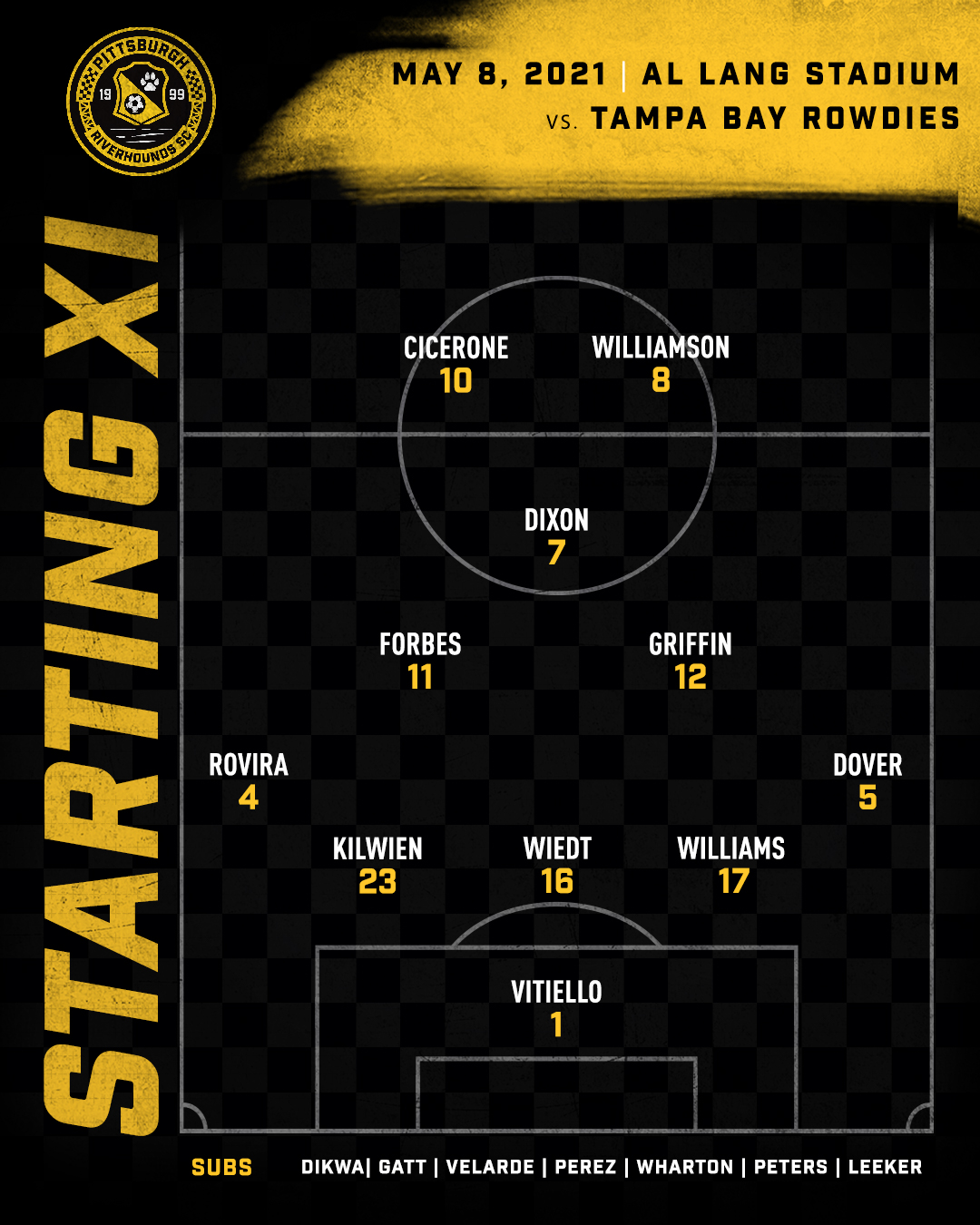 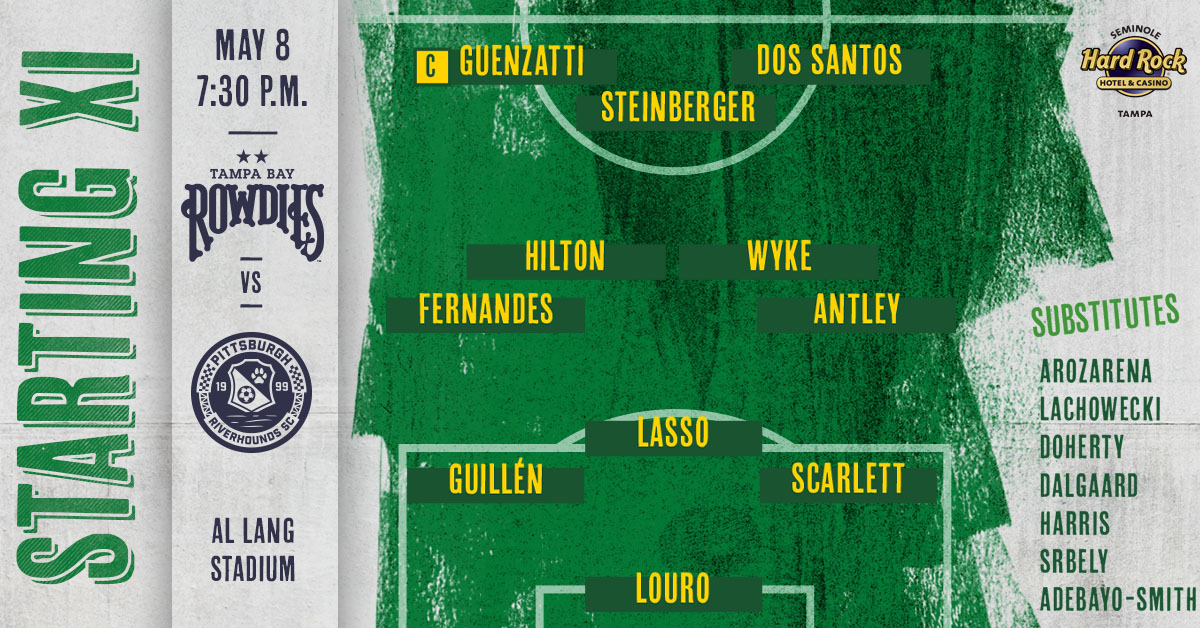 The new season begins (finally!) for the Riverhounds SC on Saturday night at Al Lang Stadium.

It’s hard to believe that the Hounds are entering their fourth season under the leadership of Head Coach Bob Lilley.

The Rowdies took a little time to get going in their season opener, but two goals and one assist by Sebastian Guenzatti in the second half eventually smoothed the way for a 3-0 win against the Charlotte Independence last Saturday night.

The victory was the fifth consecutive home opener the Rowdies have claimed since joining the USL Championship in 2017, while it moved Guenzatti to 28 regular season goals since the start of the 2019 campaign for the club. Tampa Bay has never suffered defeat at home to the Hounds – one of its home-opener victories came against Pittsburgh in 2019 – and the hosts will be looking to maintain that record with former Hound Steevan Dos Santos having performed well in his Tampa Bay debut last week.

The Hounds will bring a mix of familiar and new faces to Tampa Bay as it begins the new season, with stalwarts such as 2020 Championship All-League selection Kenardo Forbes and Jordan Dover being joined by a new collection of players after offseason departures from Lilley’s squad.

Among the newcomers to Pittsburgh are midfielder Todd Wharton and forward Russell Cicerone, who both played a notable role in helping Saint Louis FC earn a place in the postseason a year ago, while Anthony Velarde also returns after scoring five goals from midfield a season ago. After earning a notable road victory at Louisville City FC to kick off its 2020 campaign, the Hounds will be hoping for another strong debut this time around.

To add to the intrigue, the Hounds will face former topman, Steevan Dos Santos, as both coaches exchanged their thoughts on the veteran forward this week.

This will be the first of four meetings between the two clubs this season, as all division clubs will face each other four times.

Oh boy this should be interesting.  Probably the most difficult one of the year to predict. Hounds Notebook: Three cornerstones of Lilleyball put to the test with start of new season

Rowdies thankful to have Hounds ‘other most talented player’ Steevan Dos Santos on their side
Hounds Notebook: ‘We have a lot of work to do’
Loading Comments...