The Riverhounds SC edged the Hartford Athletic, 2-1, in its home opener on Saturday night at Highmark Stadium.

Robby Dambrot scored in the 15th minute, then team captain Kenardo Forbes hit the game winner with a fabulous strike from 22 yards early in the second half. Juan Carlos Obregón had Hartford’s first half equalizer in the 39th minute.

For the second consecutive match the Hounds played with a man advantage for more than a half, as this time, Hartford’s Peter-Lee Vassell was booked for a second yellow card in the 40th minute.

The Riverhounds SC got on the scoreboard early in the first half when a diagonal cross from Toby Sims on the right side made its way to the feet of Robby Dambrot after a slight deflection.  The former Pitt Panther quickly delivered a one-time, left-footed shot into the back of the net.

Here's Dambrot's first as a member of the Hounds!

Hartford started to create chances after the Hounds goal, primarily on the heels of direct play, forcing the Hounds center backs and midfielder Danny Griffin to concede unnecessary fouls.

In the 23rd and 26th minutes, Modou Jadama took free kick attempts from inside 25 yards, each shot barely went over the bar each time.

A second yellow card and subsequent ejection was issued to Peter-Lee Vassell after a hard challenge at midfield forcing Hartford to play a man down for the remainder of the game.

In the 40th minute, another foul on the Hounds, this one being dished out by center back Mekeil Williams at midfield led to Hartford playing a quick restart, which led to a long ball that got behind the unprepared Pittsburgh back line.  Juan Carlos Obregón made a timely run into the box, sending a right footed shot from very close range to the bottom right corner, after a nice feed from the speedy Prince Saydee.  It was Saydee who blew past the Hounds defense to track down the free kick.

Hartford’s momentum was derailed less than a minute later when Peter Lee-Vassell was booked for his second yellow card for a poorly timed challenge, giving the Hounds a man advantage for the second straight match.

Early in the second half, the Hounds took advantage of the extra space, when Dane Kelly drew a couple of defenders in the box, then laid the ball off to his fellow countryman, Kenardo Forbes,  The Hounds and USL Championship’s all-time assist leader had enough room to deliver a strike from 22 yards that found the back of the net, to help Pittsburgh regain the lead, 2-1.

Final – Riverhounds win 2-1! Forbes and Dambrot are the goal scorers for today. Hounds played the second half a man up and protected their lead. Recap by John Krysinsky to follow on the blog.

90+ – Kelly-Rosales who subbed on gets a yellow card. His foul almost cost the Riverhounds a goal off a free kick near the box

89′ – Dos Santos subs in for Dambrot and Ybarra subs on for Forbes. The goal scorers getting a rest in the final minutes. 5 min of stoppage time added.

80′ – Cedeno now in for Johnson in the midfield for the Athletic.

75′ – Riverhounds make 3 subs: Wiedt, Rosales and Dikwa on for Williams, Sims and Kelly.

69′ – Sims on the Riverhounds now gets a yellow card. That’s 5 players today with a yellow and Vassell also has a red.

67′ – Apollon on for Danny Barrera. Barrera won’t be catching Forbes in all-time assists tonight. Forbes at 45 all-time and Barrera has 44. Riverhounds still up 2-1 with the man advantage. #PITvHFD

57′ – Dally in for the goal scorer Obregon Jr. Hartford getting some fresh legs out there considering they’re a man down.

Forbes with an absolute 🚀 from outside the box that gets in under the bar.

51′ – An absolute snipe from King Kenny!! Wow, what a goal. What a way to start the half. The captain makes it 2-1 Riverhounds. Goal assisted by Dane Kelly. The two of them make the play happened just after being honored at halftime.

Dane Kelly honored here before the second half for scoring his 100th goal in the @USLChampionship. He’s the all-time goal scoring leader standing next to the all-time assists leader and captain Kenny Forbes @RiverhoundsSC @pghsoccernow @JohnKrysinsky @soccer_rabbi @NJEMurray pic.twitter.com/GDJW3opea7

Half – Oh man, Dixon hits the crossbar just before the whistle! Cicerone crossed it and Dixon’s shot redirected off the crossbar. Close chance. Game is tied 1-1 going into halftime.

45′ – Brewitt on Hartford almost scores off a corner. Riverhounds having some chaotic moments in the back right now. Could use this half time break and get focused for the second half. 3 minutes of stoppage time added.

41′ – Vassell on Hartford is given a red card! Honestly, I don’t understand it. This game hasn’t been that physical but the ref is calling every tackle. Whole team is not happy and I don’t blame them. Riverhounds playing a man advantage now. 1-1 game

40′ – And, Obregon Jr scores for the Athletic. Saydee with the assist. Whole team celebrates in the corner. Tie game now 1-1

38′ – Danny Griffin scores but called offsides. Dane Kelly was off before he got it to Griffin. Still 1-0 Hounds

35′ – Lewis on Athletic gets a yellow card. That’s 3 so far. Ref is calling everything here tonight

Here's how Hounds have lined up tonight (for the most part) #PITvHFD pic.twitter.com/NJyIvwawBB

26′ – Beautiful dribbling from Cicerone. Probably could’ve taken a dive since he was getting hacked at but he didn’t. I respect that immensely. Hounds still up 1-0 here at Highmark

21′ – King Kenny rips one high into the club area. Hounds certainly getting their chances so far

17′ – Alex Dixon receives a yellow card. And, a minute later Vassell on Hartford gets a yellow

Dambrot hammers one inside the far bar after having time to settle on the switch!

12′ – Robby Dambrot scores!! Beautiful use of the outside of his left foot hammers it in. I believe it was Sims that played the cross. First goal for Dambrot as a Riverhound! 1-0 Hounds

Hounds back three tonight has Mekeil Williams in the middle, with Arturo Ordonez on right and Jelani Peters on left. #PITvHFD

8′ – Riverhounds with a good press in the Athletic zone. Hartford having trouble playing out of the back. Playing lots of deep balls behind the Hounds defense, but unfortunately last season that was a weakness for the backline dealing with those long balls.

3′ – Dane Kelly down in the box. Trainer is out on the field. Dikwa warmed up but looks like Kelly is good to go.

1' – Alright, here we go! Riverhounds home opener begins. This team could do something special this season. #PITvHFA

Look for starting lineups to be posted here prior to kickoff, along with in-game updates and post match summary/reaction. 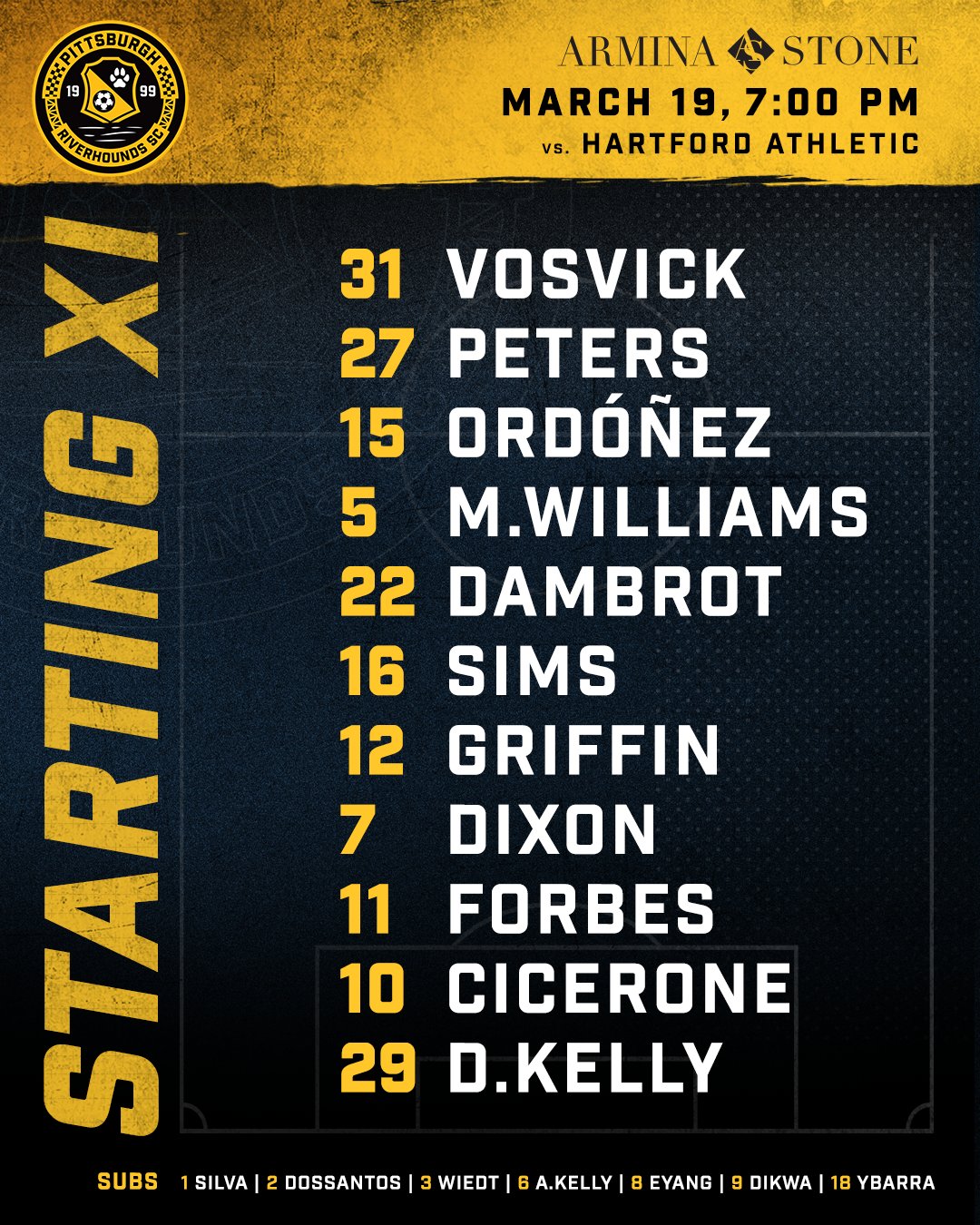 The last time the Pittsburgh Riverhounds SC won a home opener was in 2019, against the Hartford Athletic, when they defeated the new franchise, 3-1. That was also the last time they opened the season before a packed house without an attendance restrictions.

The Hounds opened the 2022 season last week in Memphis with a comfortable 3-0 win, while Hartford will be kicking off its campaign in Pittsburgh on Saturday.

PSN’s Mark Goodman took a closer look at the Athletic, as only he can. Takeaways & Player Grades: It’s only one win, but these Hounds have potential to be special