It has been a road well-traveled for the Pittsburgh Riverhounds SC in the first half of the 2022 campaign.

Despite logging many miles to this point this season, it’s been an unfulfilling journey.

Once again, in a match where they held most of the statistical advantages the Hounds were handed their fifth loss of the season.  This time they were dealt a second consecutive road shutout, 1-0, at the hands of Rio Grande Valley FC Toros, at H-E-C Field on Saturday night in Edinberg, Texas.

With the exception of last week’s embarrassing 3-0 setback to the Charleston Battery when they were completely outplayed from the start, the familiar script for this club on the road has been as follows: begin the match agressively, control possession, fail to finish chances and have a defensive letdown.

Also, Pittsburgh has not scored a goal since the first half of the home match against Detroit City FC, a stretch of 240 minutes plus stoppage time.

After starting the season with two wins and a draw, the Hounds have now posted a 0-5-2 record in their last seven matches on the road.

Travel fatigue is probably a factor at this point. They’ve played nine of their first 15 league matches this season on the road, plus they had another road Open Cup match at Cincinnati. In their last eight road matches (including the Open Cup 2-0 loss) the Hounds have been outscored 14-3.

Hounds players and coaches will be happy to return home for the next two games and for four of the next five matches to see if they can get things in order before they have to travel again. The Hounds are 5-0-1 this season at Highmark Stadium, where they’ll be welcoming the Tampa Bay Rowdies this coming Saturday.

As promised, Head Coach Bob Lilley decided to look at some other options in his starting lineup, adding Marc Ybarra and Angelo Kelly-Rosales to the starting group in the defensive midfield spots, which pushed Kenardo Forbes and Danny Griffin higher up into the attacking midfield line.  Kevin Silva got the start in goal, while Mekeil Williams returned to the back line.

The group started the match in the 4-2-3-1 formation, which struggled to keep a consistent shape at times. Recognizing the need to add a dynamic attacking option and looking to stretch RGV’s defenders a bit more, Lilley went to his bench to add Alex Dixon (swapping for Ybarra) at the start of the second half.

Dane Kelly and Dani Rovira also came on in the 67th minute for Russell Cicerone and Jelani Peters.

Luis Argudo was a late sub, joining the fold in the 88th minute when Mekeil Williams was injured.

Pittsburgh began the match with a high press designed to disrupt RGVFC’s passing out of the back. In the early going, it worked, and the Hounds showed plenty of positive energy from the jump.

However, RGVFC siezed a few quality chances by picking out a few bad passes.  In fact, the Hounds could have easily surrendered a couple of goals.

A wide open Adolfo Hernandez completely missed an open chance from 14 yards, but hit his shot too high.in the 11th minute, when Robert Coronado fed a pass that split a pair of Hounds in the box.

In the 27th minute, Isidro Martinez hit the left post with a shot through traffic.

Kenardo Forbes had a nice strike in the 14th minute, which was headed into open area of the goal, but the shot was blocked by RGV defender Erik Pimentel.

Once again, the Hounds were victimized on a long ball.  This one was a looping diagonal ball that came all the way from the right sideline from Luka Malesevic..

Ruiz should not have been able to field it that cleanly with his foot, near the edge of the box, but he did.  Both Shane Wiedt and Mekiel Willams were too slow to react.

The rest of the match played out with the Hounds controlling possession, pushing for chances in the second half with a spark from the return of Alex Dixon, but once again, they failed to come through in the final third. 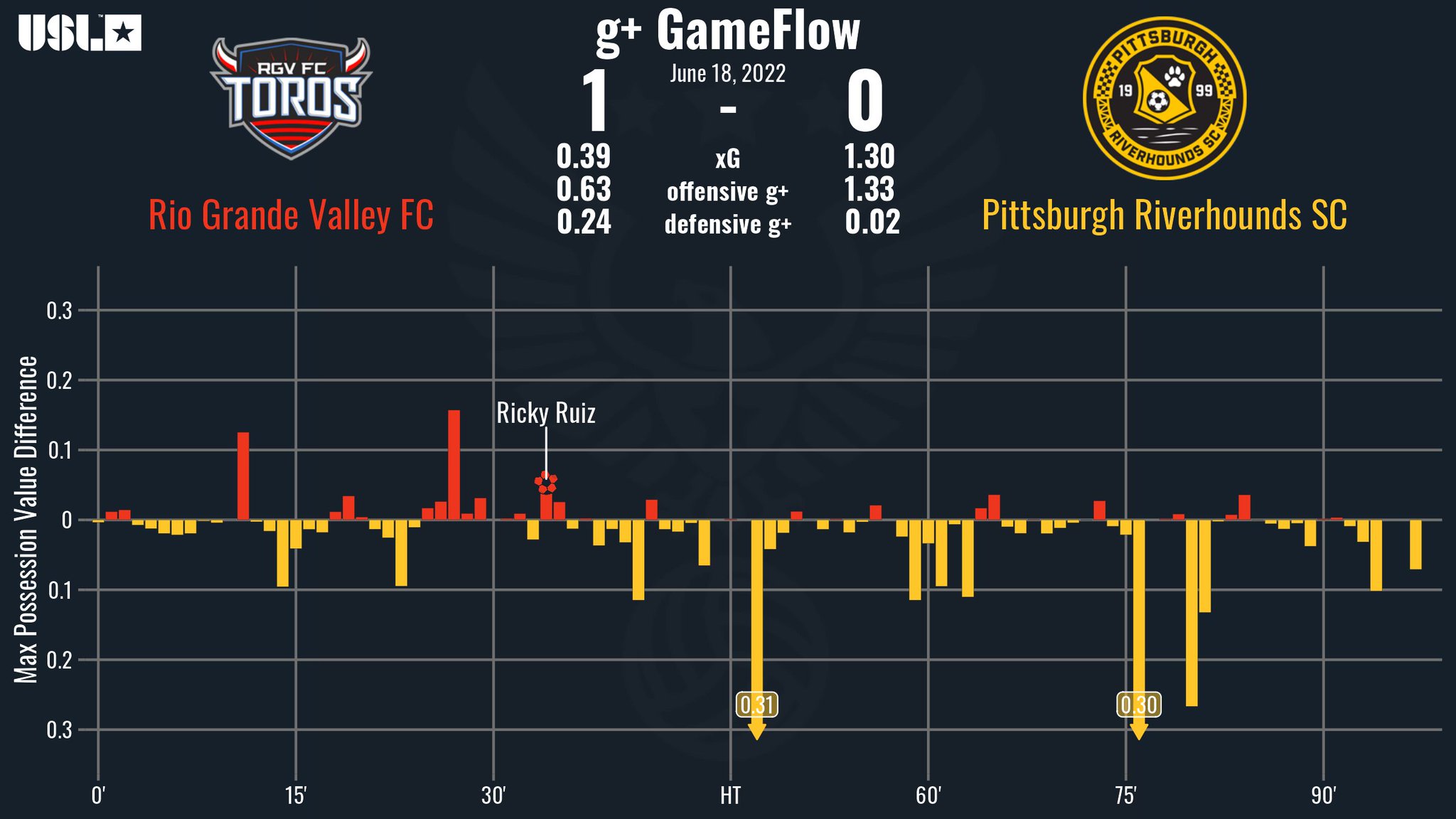 RGV’s defensive shape provided some problems for the Hounds. They pushed up higher, while the Hounds were toying with different things to break the lines.

The Hounds were offside six times.

Especially after Kelly entered the match, the Hounds made a few more long ball attempts to create some magic with Dikwa as the main target.  But those attempts failed to generate anything dangerous.

Lilley wanted to see some of his attackers go right at defenders more, especially when they’re sitting back deeper, and Dixon’s presence helped with that.

There were some other positives.

Angelo Kelly-Rosales was all over the place. The veteran midfielder had an opportunity to make the most of his first start in league action with the Hounds (after making 29 starts last year for Charleston), bringing a level of toughness, winning tackles, getting interceptions, winning 50/50 balls and showing why the Hounds picked him up in the offseason as a potential number six solution.  In a match that was very physical, especially as RGVFC were doing their best to slow down the Hounds in the second half, Kelly-Rosales gave the Hounds a solid presence in the middle, as did Marc Ybarra, who also held his own and provided quality passing (team high 90% accuracy), but was subbed out at the half to get Dixon on the field.

The fact that the Hounds controlled 62% possession was a tribute to the midfield’s ability to connect passess and extend play enough to give them a chance.  With the exception of the three first half opportunities and one late shot on target in stoppage time, the Hounds kept RGVFC out of the box and only allowed five shots the entire match.

Dikwa made a nice move to get beind the line in stoppage time, putting his shot in the back of the net, but was (clearly) offside.  Dane Kelly fed Dixon with a nice lay off the to left side in transition in the dying moments, but the quick, hard strike was saved.

“When on song, we’re going to be very tough,” Lilley said last week.

The Hounds started humming some at the end of this match, but the curtain came down to end another disappointing road performance.

They’re looking forward to getting back on their home stage when they face Tampa Bay this coming Saturday at Highmark Stadium.