Once again the Pittsburgh Riverhounds SC endured a penalty kick shootout, but this time, they came out on the losing end, falling to Louisville City FC, 2-2 (5-3 in the shootout), in a heartbreaking end to the 2022 campaign.

LouCity will play host to the Eastern Conference Final against either the No. 2 seed Memphis 901 FC or No. 3 seed Tampa Bay Rowdies on Saturday, Nov. 5 at 7:30 p.m. ET, with the appearance Louisville’s eighth consecutive Conference Final berth in club history.

For more than 80 minutes, the Riverhounds SC managed and scapped their way to holding a 2-0 lead in hostile territory, but a quick surge from Louisville City FC in the late stages turned the tables of the match, with two goals.

The teams would play through the end of regulation and extra time testing each other in spurts, but ultimately having to settle the contest in a penalty kick shootout.

Russell Cicerone scored both of the Hounds’ goals in regulation, while Manny Perez and Cam Lancaster added Louisville City’s goals.  Danny Faundez came up with the only save in the shootout, stopping Hounds’ Danny Griffin’s attempt that started the proceedings.  Louisville converted on all of its chances, as last week’s hero, Hounds goalkeeper Jahmali Waite was unsuccessful this time around.

In the 15th minute, Cicerone was well-positioned in the far side of the box for a Robbie Mertz cross that gave the Hounds the early lead.  Despite conceding more than 60 percent of the ball, the Hounds remained steadfast in defending through the first half, only allowing four Louisville City shots, none that went on frame.

Early in the second half, Pittsburgh stunned the home side and its crowd of more than 8,000 fans, when Cicerone was on the receiving end of a terrific string of one-touch passes by the Hounds through the middle of the field that ended with a Kenardo Forbes thru ball.

Louisville had a chance to pull a goal back five minutes later as a corner kick from the left caused a scramble in the penalty area, resulting in a chance for Corben Bone that flew over the crossbar, but in the main the hosts continued to have difficulty breaking down Pittsburgh’s defense as it tried to find a way back. At the other end, meanwhile, the Hounds found more attacking threats to extend their lead. On the hour-mark, Forbes played Albert Dikwa in for a chance that was well saved by Faundez, and the shot-stopper came up with another save eight minutes later to keep out Alex Dixon.

Then, came a two-and-half minute sequence that would doom the Hounds.

In the 81st minute, the home team finally capitalized on a set piece, when Waite made a terrific save Josh Wynder’s redirect shot attempt, but Perez pounced on the rebound with a shot from the right side that cut the lead in half in the 82nd minute.

The match would go to extra time, where both sides had solid opportunities as play opened up at times.

Louisville City held huge advantages with a 49-14 dominance in the number of crosses and 14-7 difference in corner kicks, while the home side owned 66 percent of the match possession.

Kicks from the Penalty Mark summary

Look for a more detailed recap to follow here, plus more post-match reaction to come.

Look for starting lineups, key in game highlights and updates to be posted here, plus, we’ve already begun to track some of the pregame blotter…

And @loucityfc wins the PK shootout — and defeats the @RiverhoundsSC, 2-2 (5-3) to advance to the @USLChampionship Eastern Conference Finals for the 8th time (and 8th straight year). #LOUvPIT

We’re going to PK’s!!  Second straight week for the Hounds.  Can they do it again?

105′ ++ — Attempt missed. Manny Perez (Louisville City) right footed shot from the centre of the box is high and wide to the left. Assisted by Joshua Wynder with a cross following a corner.

If Kizza was offside it was by the narrowest of margins.#LOUvPIT

97′ — Corben Bone with sissor attempt that is robbed by Waite!!

93′ – Kizza heads Dikwa in down the right, but Faundez makes a kick save out for a corner!

91′ — START OF 1ET — LOU SUBS Oscar Jimenez replaces Cameron Lancaster, who appears to be minutes limited on his comeback from an injury.

HOUNDS SUBS – Mertz and Wiedt are out — in comes Edward Kizza and William Eyang.

90′ +++++ – Sims fouled by Mushagalusa with the high boot, and the Hounds players looking for a card akin the the Dikwa call. None forthcoming.

89′ – Card issued to Perez for Louisville for a dangerously late slide into Griffin.

PK — Cam Lancaster levels it with a turf burner to the left that beats Jahmali Waite.

Manny Perez with the rebound after Waite makes an amazing save on initial redirect from a free kick.

72′ – The Hounds have not won a corner, have only four crosses, but their shape and defending in final third has been solid despite LouCity’s 13 crosses, 5 corners & 63/37 possession edge.

68′ – Dixon down the right gets a good shot on goal to force a save. Could have been a breakaway, but his first touch was a bit behind him.

62′ – Josh Wynder gets the first Louisville card for chopping down Dikwa down the right flank.

57′ — SUBS Hounds  — with mindset to keep the clean sheet and get guys off who are sitting on cards… IN: Angelo Kelly, Jelani Peters OUT: Dani Rovira, Mekeil Williams 57′ 2-0 Pittsburgh leads Louisville City

Russell Cicerone again with the brace!

What a terrific one-touch passing by Hounds that led to great thru ball for Russ who gets behind his man. Hounds have stunned LouCity w/ early 2nd half 2-0 lead!  Forbes had the last pass to get the assist.

The Hounds have made the most of their primary chance, as Russell Cicerone converted on his big chance in the box, thanks to well placed Robbie Mertz cross.

Louisville being contained to the perimeter and can’t get much going in the box.

44′ — Lot of gamesmanship from Hounds tonight. They’re doing all the little things to frustrate Louisville. Rovira with a little extra there to get the yellow card. Free kick for home side bounces back out and redirected to left of goal & easy pickup for Waite.

42′ — Not a lot of shots from either side, but Hounds looked dangerous again after patience and some solid buildup around the box. Capped by Danny Griffin (!!) well-struck ball that barely sails over right corner.

24′ — Ordonez holding his own thus far in 1v1 situations with the dangerous Dia. Denys any attempt for the speedy wide man to get into the box, and blocks cross attempt.

Ball in box comes in from Robbie Mertz on right side, sails over near post effort for Dikwa, but on back post is Cicerone, who’s there to send it home.

10′ — It’s posted on USL Match Center as a 4-2-3-1, but the Hounds are looking more like a 5-4-1 tonight (From what I can see) with the MF line of Mertz, Forbes, Griffin, Cicerone. Dixon and Rovira are playing deeper along the back line. 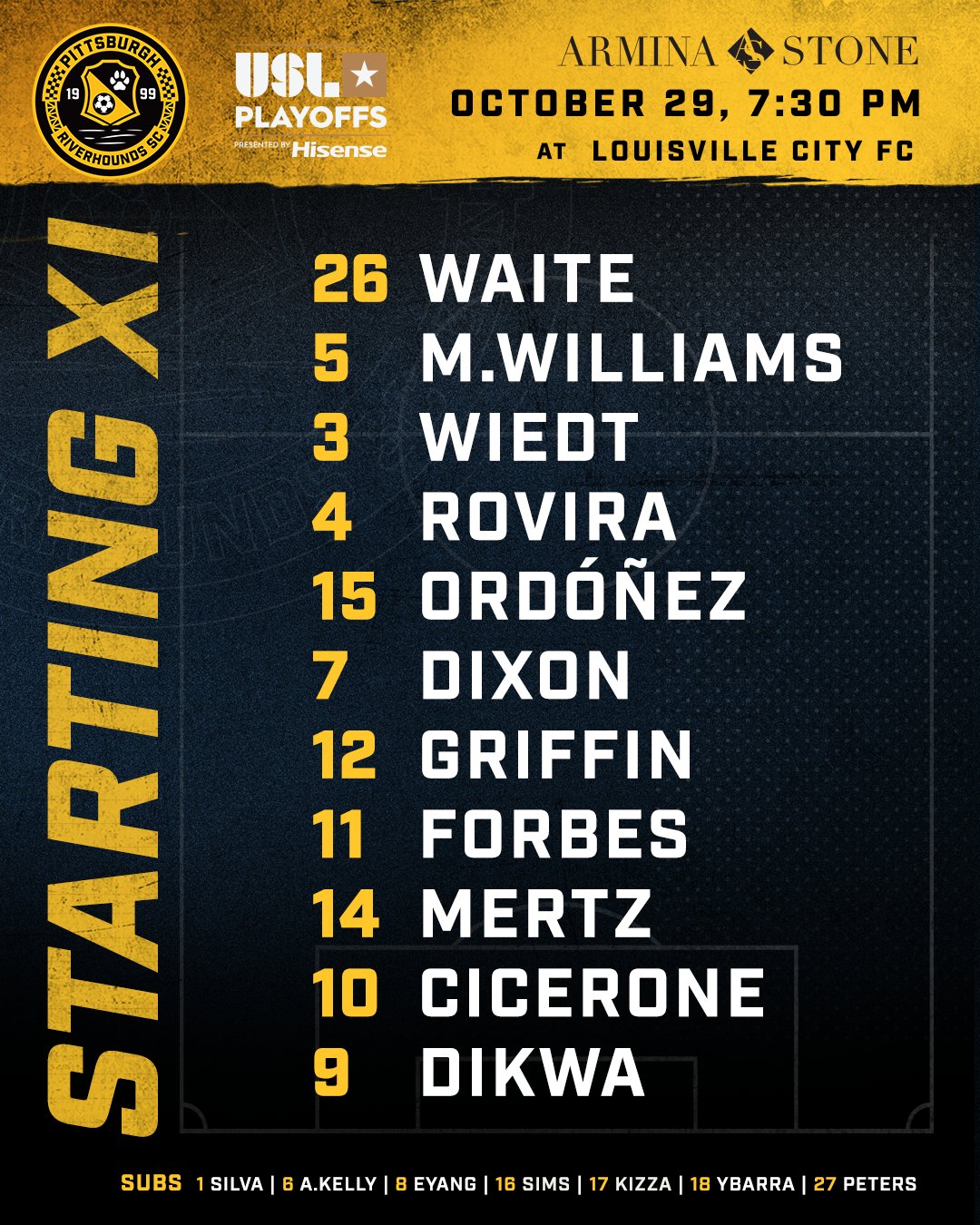 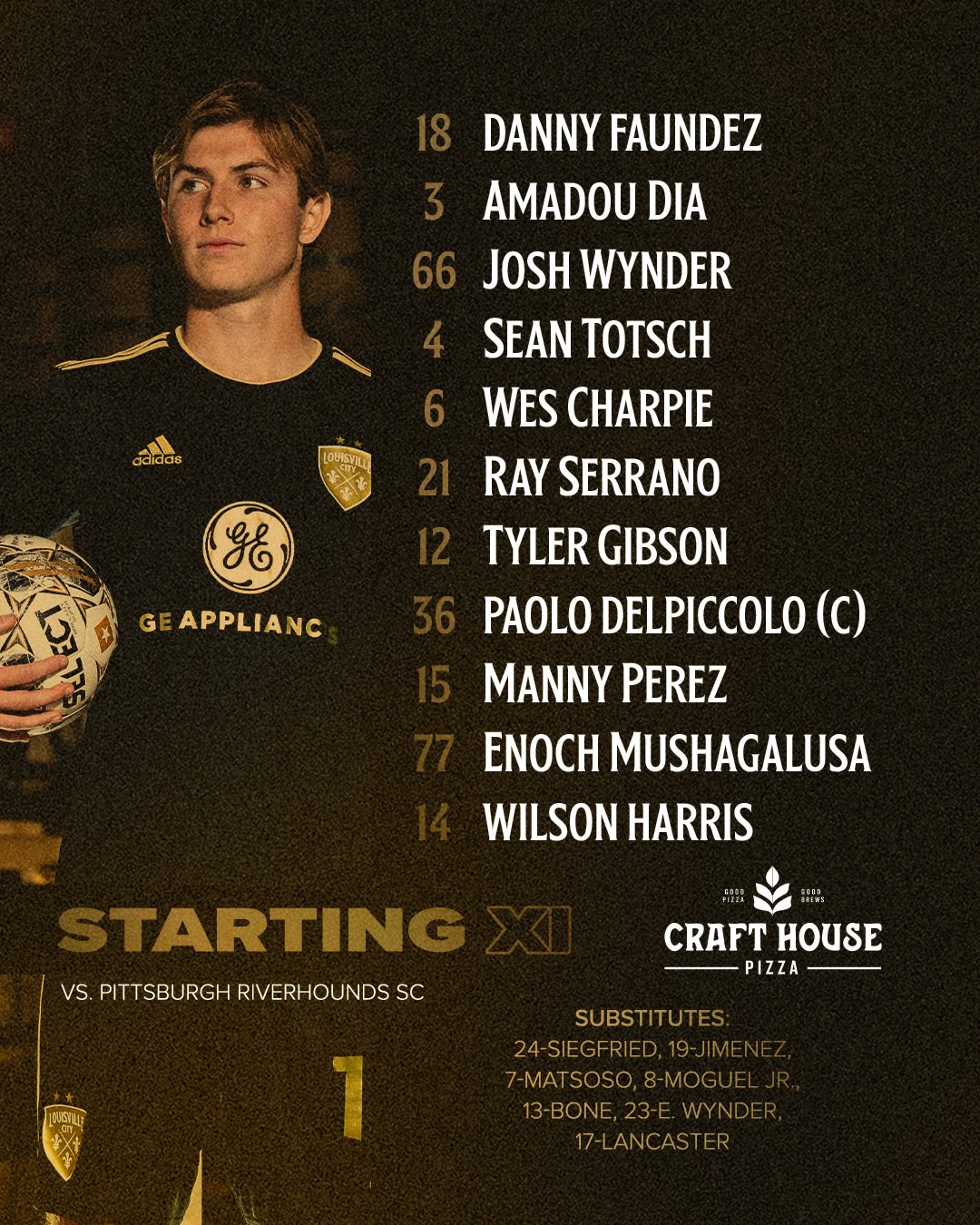 Arreguin's only previous Hounds match was last year at San Antonio (1:1 draw) and he has worked 1 Louisville match this season, a 0:1 win at El Paso.

In 16 league matches this year, he's given 8 penalties and shown 5 reds.

He was the ref in last weekend's Memphis/Detroit match. pic.twitter.com/8CRBVGcdnv

Ownby, Morton, and Lancaster are all still questionable two days out from #LOUvPIT #LouCity

The Riverhounds SC and LouCity meet for the third time in the last four years in the USL Championship playoffs, and for the second time in the Semifinal Round on Saturday night at Lynn Family Stadium.

The Hounds are coming off an epic quarterfinal round win at Birmingham, and had just three days of training in Pittsburgh, plus a travel day and light training in the Derby City to get ready for this one, while the hosts will be well rested, as the top seed had a bye in the first week of the playoffs.

These teams met twice this season, with Louisville winning the first match at Lynn Family Stadium in late April, 2-0, but in the rematch, the Hounds buckled down to play the Conference leaders to a nil-nil draw at Highmark Stadium.

On Friday, in Hounds Notebook, we dove deeper into the match-up and looked at the Hounds role as the underdog, as Louisville looks to reach its eighth straight appearance in the USL Championship’s Eastern Conference Finals.