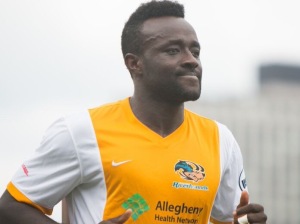 Stephen Okai scored twice for the Riverhounds in their 3-0 preseason win over Ohio State. (Photo Courtesy of Pittsburgh Riverhounds)

The Pittsburgh Riverhounds may be in preseason form, but they still made it look fairly easy in defeating The Ohio State University men’s soccer team, 3-0, this afternoon at Highmark Stadium.
Veteran returning midfielder Stephen Okai scored twice, and newcomer Jamaican forward Romeo Parkes delivered the other strike, as the Riverhounds handled their collegiate opponents at Highmark Stadium.
After speaking with Head Coach Mark Steffens after the friendly, he’s liking what he sees after the first three weeks of preseason.
Here’s my post-game interview with Steffens as he talks about the scrimmage, building team’s chemistry, the competition for starting spots, his returning players and what he expects from them — and some news — sharing that players (didn’t share names) from Columbus Crew partnership will be in Pittsburgh this week — and that they will have to earn playing time just like everyone else on the roster:

Back to the scrimmage, for much of the first 30 minutes, the Hounds had the better of play, but were not able to create many dangerous scoring chances in the final third. Okai finally helped the Hounds break through into the scoring sheet, finding a loose ball in the box, and delivering a strike to the left side of the goal in the 43rd minute.
The Hounds would follow with two second half goals, including a perfectly played ball from Lebo Moloto to Parkes, who snuck his shot past Ohio State’s goalkeeper and just inside the right post.
Then, for the second preseason game in a row, 17-year old Canadian Duwayne Ewalt was involved in a goal. Last week, his header was the difference in the 2-1 win at Penn State.
Today, he broke through with the ball past the right side of the Buckeye defense with an impressive burst of speed. As Ewalt got into the box, was fouled from behind to set up Okai’s second goal, a penalty kick that capped the scoring.
Riverhounds starting lineup had a mix of returning players, and some new faces, including Ewalt, who started at forward.
Kevin Kerr, who led Pittsburgh in assists last season, wore the captain’s armband, and spent a few moments after the match talking about the team’s performance.

STARTING XI
Hunter Gilstrap (GK), Ewart (F), Kerr, Moloto, Parkes, Mike Green, Okai, (D) Jordan Murrell, Sergio Campbell, Willie Hunt and Caleb Postlewait.
SUBS
Zak Boggs was the only field player to come in as a sub in the first half (for Ewalt), and the Hounds rotated goalkeepers every 30 minutes. Maurico Vargas replaced Gilstrap, then Robert Morris and Central Catholic standout, Brenden Alfery made his professional debut in the final thirty minutes to preserve the clean sheet.
The second half, Steffens moved a few guys in and out of the line up. Starting in the second half included former West Allegheny product and second-year Hounds, Nick Kolarac, along with a handful of new faces. James Bissue, Nick Kolarac, Ryan Dodson, Karsten Smith and the first appearance of Conor Branson, a native of England who played at the University of Charleston (sound familiar Riverhounds fans? UC is Rob Vincent’s alma mater).
Recent arrivals Corey Hertzog and Isaiah Schafer were rested after picking up minor strains in training last week. Alex Harlley is back in Atlanta for a few days attending to personal matters.
Ohio State’s lineup featured former Riverhounds Academy midfielder Steven Munn. The Cranberry Township native spent the past two summers playing for the Hounds’ Under-23 team in the USL Premier Development League. Munn had a late chance to put the Buckeyes on the board only for Alfery to pull off a magnificent save.
UP NEXT
As Steffens eluded in his post-game interview, the Riverhounds will be announcing the players from the Columbus Crew who will be joining the team early this week. This will likely round-out the team’s roster.
The Hounds will continue the preseason schedule with a home game vs University of Michigan’s men’s team, on Sunday, March 13, that will also include a Fan Fest, with the doors opening at 11 a.m.
Former Riverhounds leading scorer from 2015, Rob Vincent and the D.C. United will open their MLS season play tonight, at 10 p.m. (EST) vs LA Galaxy. Vincent started the second leg of their CONCACAF Champions League quarterfinal vs Queretaro on Wednesday, a 1-1 tie that knocked the United out (losing 3-1 on aggregate goals).

Talking ‘Miracle on the Mon’ and Riverhounds on 93.7 The Fan

Talking ‘Miracle on the Mon’ and Riverhounds on 93.7 The Fan