All of the finals are in! Boys WPIAL quarterfinals see all top seeds advance, and three late games that go to OT and two decided by penalty kick shootouts. 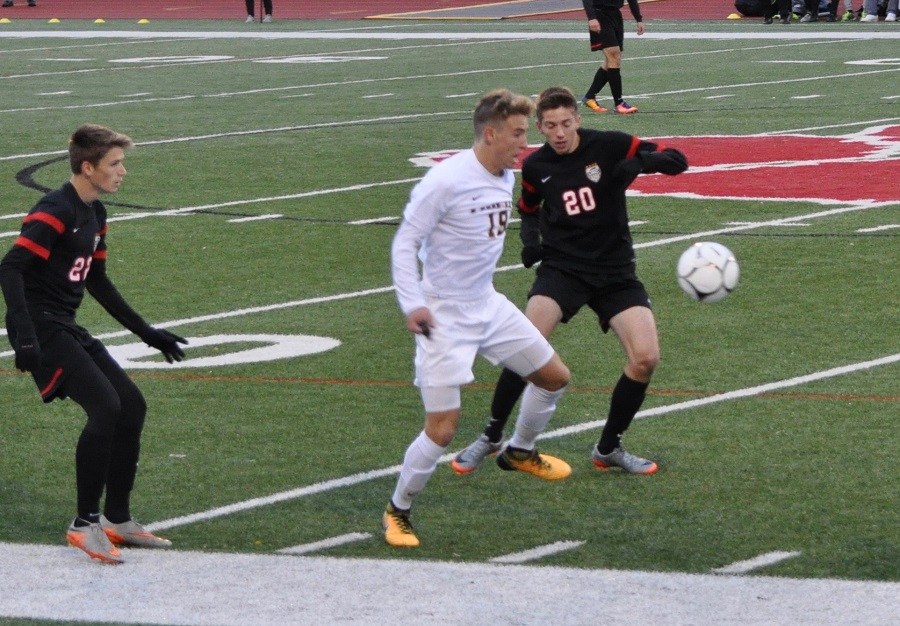 WHAT:  WPIAL (PA District 7) boys high school soccer playoffs – Quarterfinal round
WHO:    4 classifications — 4A, 3A, 2A, 1A  (16 games overall)
WHEN:   6 p.m. and approx. 8 p.m. (doubleheaders)
WHERE:  at 8 sites (Hampton, Moon, Gateway, Mars, Peters, Ambridge, Seneca Valley and Canon-McMillan)
LISTEN: TribHSSN.TribLive.com
Saturday, the boys semifinals are set. Here they are:
4A
Peters Twp vs Pine-Richland – 3 p.m. at West Allegheny
North Allegheny vs Canon-McMillan- 3 p.m. at Mars
3A
West Allegheny vs South Fayette – 3 p.m. at North Allegheny
Chartiers Valley vs Montour – 1 p.m. at West Allegheny
2A
Shady Side Academy vs Central Valley – 1 p.m. at Ambridge
Quaker Valley vs Beaver – 3 p.m. at Ambridge
1A
Cardinal Wuerl North Catholic vs Winchester Thurston – 1 p.m at Mars
Springdale vs Seton-LaSalle – 1 p.m. at North Allegheny

10:40 p.m. — all finals are now in — last one to report — defending 3A champs Chartiers Valley pushed to the limit in yet another OT game — tops Blackhawk, 1-0 on a golden goal.

On we go to the semifinals on Saturday!
10:35 p.m. – Pine-Richland pulls it out — wins 4-3 on PKs to defeat last year’s WPIAL runner up Seneca Valley.
I believe that we now have three of the four teams that were in 4A semifinals a year ago. Seneca was the fourth last year that won’t return.
10:30 p.m. – GOLDEN GOAL …  from Aidan Perez in 102nd minute, assist from Nick Gengarella, Beaver beats Deer Lakes 1-0 in OT.

Boy’s school BREAK A SCHOOL RECORD and advance to the WPIAL Semifinals!!!!!!! Both Samangy’s SCORE as the Warriors beat Mt. Pleasant 2-1⚽️⚽️

Springdale's Nick Taliani talks about his game-winning goal and the win over No. 2 Freedom to advance to the WPIAL Class A semifinals. pic.twitter.com/mRhj9AWnKw

9:37 p.m. – Canon-McMillan and Franklin Regional end regulation 2-2. Going to overtime.
9:34 p.m. – Canon-McMillan scores with 1:55 remaining with goal by Tommy Samosky to pull even with Franklin Regional 2-2
9:30 p.m. –
Seneca Valley’s Luke Rupert’s goal with under 18 to play to draw even with Pine-Richland.
9:15 p.m. –
Franklin Regional takes a 2-1 lead on Canon-McMillan. Zach Guidry gets his second, as things gettng chippy.
halftime — Deer Lakes and Beaver Area are in a scoreless tie.
Pine-Richland leads Seneca Valley, 1-0, in a battle of section rivals.
8:01 p.m. – here are some more early scores
Defending 4A champs move on again by 1-0 margin. No easy games in 4A. Both goals in these playoffs by Lehigh commit Josh Lucini

And for the third consecutive year Greensburg CC goes down in Q-final game at Hampton.
This time to Winchester Thurston, 2-1.
They’re hoping not to return to Hampton next year, right?
https://twitter.com/GCC_Boys_Soccer/status/923365414956134400

Quaker Valley 1-0 over.Riverside in 2A; CWNC rolls 4-0 over Bentworth in 1A

6:15 p.m. – wow — Waynesburg sure likes playing in high scoring games — as Shady Side Academy (15 seed who stunned #2 South Park on Saturday) are already up 2-0. Waynesburg outlasted Obama Academy 6-5 on Saturday.

Waynesburg now trails 2-0 after a corner by SSA. #WPIAL

6:03 p.m. – the early games have kicked off. No reports of any delays.
Here’s the set-up.
I’ll post information as score updates/highlights come in on the scoreboard below.
If you have any scores, goals, highlights, tweets, final results or even pictures/videos — please share them with us. Feel free to send along to me by email at pghsoccerreport@gmail.com, send me tweets at @pghsoccerscribe or message me via Pittsburgh Soccer Report Facebook page.

Boys schedule for the WPIAL playoffs is as follows: