Second half starts –and both teams with possessions deep into attacking third. Bakie Goodman plays a ball inside the goal box for Francois but it just misses. (47′)

Dan Metznar with an early second half yellow card. Hounds free kick from inside midfield is played too short. (48′)

Penn FC continue to be the much sharper of the two sides right now.

Penn FC with decent chance — long ball to Aaron Dennis in stride and onside, but Hounds defenders close him out and steal ball away. Hounds quickly counter. Kerr takes it in from left side. Kerr’s ball to Romeo Parkes inside the six can’t quite connect. (58′)

Ironically that is the same time that Gareth Bale came in today for Real Madrid.

Parkes again with chance at near post at end of chaotic sequence. Kerr’s ball in from the left first sees François’ shot blocked then Peiser makes a diving save on Parkes.

Parkes kicked Peiser. The Penn FC keeper was down for a minute, but got back up. (65′)

Hounds opting to go with both Brett and Parkes at the top of the attack.

Richard Menjivar shot to right side tipped by diving Dan Lynd – then bounces off post.
Close call for Hounds.

Hounds attack lackluster and having issues with unlocking Penn FC in tight shape — knocked it a round a bit then sent long ball for Brett, but goes out. (86′)

Into stoppage time, the Hounds knock it around the box nicely — and suddenly Romeo Parkes has all kinds of time to shoot and completely misses his shot to the right of goal. (92′)

Brett took shirt off to celebrate and was issued yellow card.

Romeo Parkes gets behind his man, sends a shot at keeper Peiser, setting up corner (3′)

Connor Maloney with a shot from distance that forced Peiser to punch away. Sets up a corner. Kevin Kerr’s service connects with Hugh Roberts, but header misses to right of goal. (7′)

On contrary to what line-up card looked like Thomas Vancaeyezeele is playing in holding mid position along side Ben Zemanski. Hounds going with 4-man back line. Kerr sitting in center of the three attacking mids with Parkes up high. (8′)

Collision on right side of Penn FC attack — and Andy Lubahn called for foul. Free kick coming for Penn FC. Freddie Opoku’s ball in is cleared by Hounds. Corner kick comes in dangerously, but a couple of clearance attempts –and Penn FC is called for a foul. (14′)

Parkes with a number of touches on fringe of attacking third — then giving away ball with some bad decisions. But then gets loose on right side — shot deflected — bounces in front of Kerr. But Hounds capt’s shot goes over bar. (24′)

Been pretty quiet past 10 minutes or so. Kerr is knocked down just past midfield. Sets up free kick from 40 yards out, but ball headed to far post area goes out. (34′)

Penn FC cut a nice ball through to Dennis, but Lynd comes way off his line to deny a chance near the 18. (36′)

Hounds get forward quickly with couple sharp, low passes, from Roberts to Parkes to Kerr alone on edge of box — but number 10 was off side.  (38′)

Parkes serves up a ball to the middle of box, and two smallest Hounds, Goodman and Kerr can’t get to it, but it’s cleared over end line by Penn FC for corner. Hounds knock it around after corner. Maloney ball in to Vancaeyezeele connects. Header goes wide. (45+)

on loan from Columbus, Connor Maloney stretching out bere making his first start with @RiverhoundsSC this season pic.twitter.com/z0pRqdR1zQ

• Even though they remain unbeaten in league play, Riverhounds SC will be a determined bunch on Saturday coming off its first loss of the season, a 3-1 defeat to FC Cincinnati on Wednesday in the third round of the Lamar Hunt U.S. Open Cup at Highmark Stadium.

In fact, the Hounds have not won a league match since a 1-0 decision over Atlanta United 2 on April 28.

• This will be the second of three meetings in the Keystone Derby Cup series between Pittsburgh and Penn FC this season. The teams battled to a nil-nil draw in late March. The early season tie ensured that for the fourth straight season, the Keystone Derby will be decided in the final match, coming on Sept. 26 in Harrisburg. In each of the past four seasons, the Cup deciding match has taken place in Harrisburg. The Hounds won the Cup in 2015 and again in 2017.

• For both sides, it all starts with defending the goal. The Hounds lead USL in shutouts (six) and goals allowed (five), while Penn FC is not far behind with four clean sheets and seven goals allowed. Pittsburgh currently has shut out Penn FC in four straight matches dating back to April 29, 2017.

• In the midst of a very challenging stretch, the Hounds have picked up Connor Maloney on loan from Columbus Crew to provide depth — particularly with the wing/flank positions that require a lot of running.

• The match is being promoted as a ‘Blackout’ — as all fans are encouraged to wear black, while the Hounds will wear its all black kits for the first time. With a win on Saturday, the club’s all-time record at Highmark Stadium will go over .500 (28-28-22). 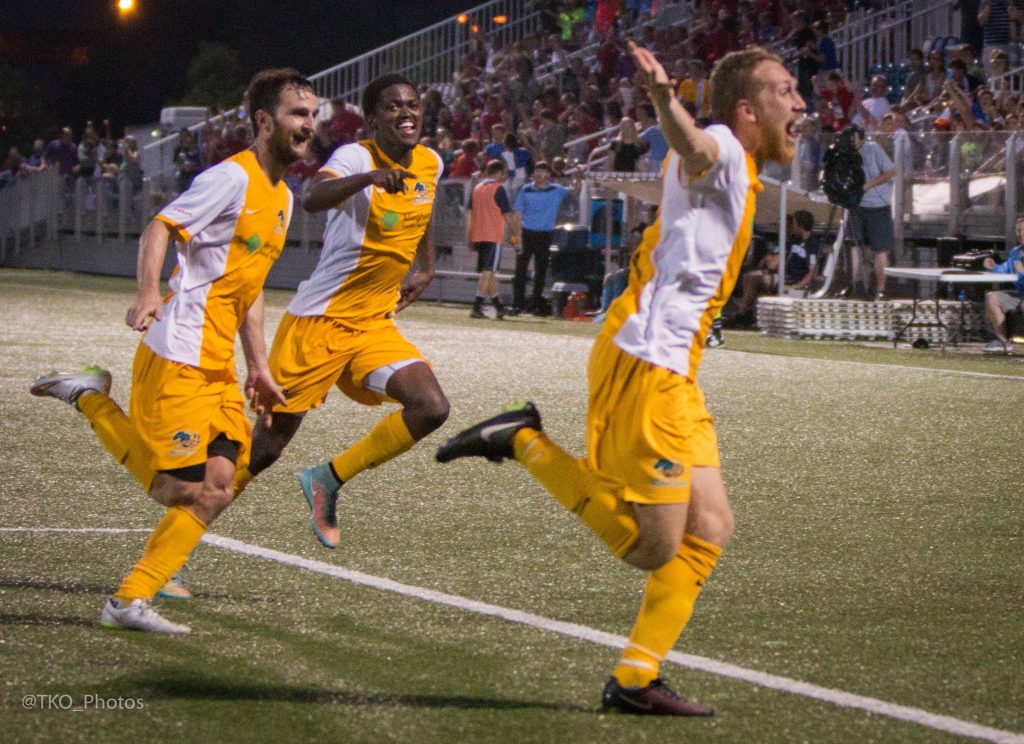 RELATED: MIRACLE ON THE MON – HOUNDS COMPLETE COMEBACK FOR THE AGES

It is almost three years to the day from the Hounds’ most legendary win in this series — a 6-5 come-from-behind  ‘Miracle on the Mon’ on May 30, 2015. After trailing by scores of 3-0, 4-2 and then 5-3 in the 88th minute, the Hounds pulled off a miracle win with three goals in the final five minutes of the match.

Riverhounds Rabbi delivered his second scouting report of the year on Penn FC, who are looking a bit improved then they were when the teams played in the second match of the season. Justin from MonGoals was joined by Chris Bratton, who covers Penn FC for the Brotherly Game, and together they break down what to expect from this derby match up between the two in-state rivals. Penn FC’s two veteran go-to guys in the attack, Lucky Mkosana and Tommy Heinemann, have each notched three career tallies against Pittsburgh. It’s been quite some time since both have done so — as Mkosana’s last goal came in 2013 and Heinemann’s in 2010.

“We don’t like the taste of losing, so we’re going to go and try to get three points on Saturday.” Hounds coach Bob Lilley, after the team’s 3-1 loss to FC Cincinnati on Wednesday.

“When these guys heads go down, you have to be a positive influence on the field and bring some energy,” Dennis Chin, former USL Golden Boot winner who saw his first action with the Hounds on Wednesday, said. “Sometimes it works and sometimes it doesn’t. We have to build on that going forward.” May 30 – Hounds 6-5, at Highmark Stadium  (Miracle on the Mon – Hounds score three goals in stoppage time)

July 17 – City Islanders, 2-1, at Highmark Stadium (Kerr with the only tally for the Hounds)

May 24 – 0-0, at FNB Field, Harrisburg (scoreless draw sets up deciding match in August)

August 12 – Hounds, 3-0, at FNB Field (Pittsburgh cruises to victory in recapturing the Cup on City Island)