Kenardo Forbes‘ late second half goal was the difference in a tightly contested match.

What a time (and a bounce) for Kenardo Forbes to pick up his first goal as a Hound! #LOUvPGH pic.twitter.com/NBkW4bZqSY

“In the second half, I thought we were better,” head coach Bob Lilley said. “The first 25-30 minutes were good. I thought we looked like we were more likely to score. We brought our subs in – they looked like they were going to impact the game. Good through-ball by [Kenardo Forbes], good run by [Romeo Parkes] and we got in behind them.”

Pittsburgh nearly opened the scoring in the 23rd minute when Neco Brett sent a through ball for Christiano Francois who got through one-on-one with Greg Ranjitsingh. But the Louisville keeper stood tall, Ranjitsingh making an impressive double save to keep it scoreless. Louisville thought it had the opener in the 58th minute when Paolo Del Piccolo had the ball in the back of the net but his effort was denied for a foul on Hounds’ keeper Dan Lynd.

With two of the strongest teams in the league doing battle it was unsurprising that it took until the 79th minute for the opener as Romeo Parkes found some room on the left side after receiving a ball from Forbes to move into the final third — then sent a ball into the box. After a deflection, Forbes sent it home for his first ever goal with the club, giving Pittsburgh only its second win ever at Louisville.

Lynd was unbeatable in the Riverhounds’ goal, making five saves, a number of them stunning and late, vital to giving his team a point.

With the win, the Hounds improve to 7-1-7, and now sit alone in second place in USL’s Eastern Conference trailing front running FC Cincinnati by three points after their 3-3 draw at Toronto FC. The Hounds have a game at hand with FCC. 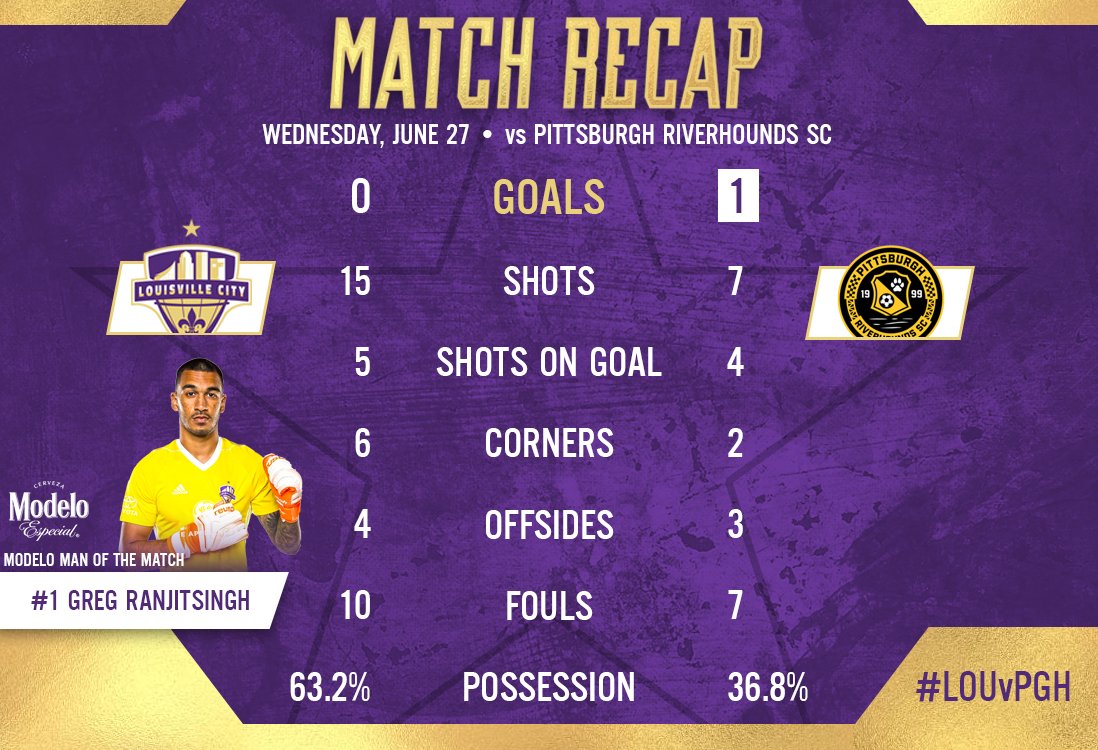 Stat of the Game
With the shutout, the Hounds improve their season goals-against average to 0.47, which is the best mark in club history.

What’s Next
Riverhounds SC returns home for its first-ever meeting with North Carolina FC (4-7-3) at 7 p.m. on July 4 at Highmark Stadium. After the match, fans are welcome to stay and watch the Pittsburgh Point State Park fireworks display light up the city skyline from their seats at Highmark Stadium.