Had plenty of room from the left side.

Joe Greenspan and Kenardo Forbes and Lubahn and Zemanski 65′

8:26 p.m. – Matthew Buldoc pulls down Dabo at midfield and is now booked.

8:24 p.m. – Free kick now goes into wall. Hounds clear — and now we have a little scuffle on far end of field. Gentile is in the middle of it with Franke. Gentile knocked Franke down. After official has words with both, kick coming for Hounds.
60′

8:16 p.m. – ball bounces out to Zemanski just inside box, redirects shot that’s deflected by Spangenberg handles ball as it heads to upper right corner of goal.

8:13 p.m – Hounds with chance on left side — Brett puts it through but was off side.
Then Andy Lubahn called for yellow card at midfield. 48′

7:45 p.m. – Another solid ball in on a corner from Richmond. Lynd punches it away, and Hounds fortify wall to deny shot attempt. Then Hounds counter, Franke takes it deep and decent ball in to goal box, but cleared for corner. 40′

7:35 p.m. – Free kick for Richmond from left side — comes in low and GK Dan Lynd gets down low to punch it out but it deflects back toward goal area but fortunately out past end line. Hounds dodge bullet there. 30′

7:32 p.m. – Sloppy clearance on ball in by Hugh Roberts leads to RIchmond corner
The in swinging ball on corner connects with Gentile past far post — but header too high.
27′

7:25 p.m. –  Franke again with burst of speed and give it a go from right edge of box. Shot in sails just wide left.

Francois with great pace — gets near left end line then takes hard shot on target. Save for Spangenberg.

Noah Franke moments later gets a good look from 24 yards — and ball juuuust sails over bar.

defender misplayed header, Brett was there with the clinical finish Hounds lead 1-0.

Richmond complaining that Brett was off side.

Some folks are surprised by the Hounds starting XI – though coach Lilley said on Monday he wouldn’t be overloading playing time for many players this time of year.

Expect the line-ups to be available a little after 6 p.m.  I’ll be posting them when I get a chance.

If time permits, Matt Gajtka and I will be recording on our Facebook page — a Facebook Live game preview during warm-ups.

• All of a sudden the Riverhounds are in a precarious position, having lost two games in a row, after only previously losing once in 17 contests to start the season. There’s little panic however among the coaching staff. I caught up with head coach Bob Lilley on Monday, as he still remains confident in his squad as he’s trying to emphasize the importance of bringing a very high level of focus to every match, regardless of opponents.  The Hounds saw their eight-game unbeaten streak on the road come to a close last time out, as well as failed to capture a point when scoring at least a goal (4-1-0). Pittsburgh has also allowed a goal in two consecutive matches for the first time this season. RELATED: Hounds will see what they’re made of to reverse season’s first slide

• Richmond haven’t had a good season, and are coming off a 3-0 defeat to Charleston on Saturday. This will be the third game in seven days, and they only have one road win this season, a 2-1 victory on July 9 at Penn FC.

• This is the second and final match of the season between two of USL’s Old Guard rivals, and it marks the 40th time they’ll square off since 1999. Though Richmond holds the decided edge in the all-time series (19-9-10), the Hounds hold the upper hand this season with a comeback win at City Stadium on June 2, with second half goals from Neco Brett and Romeo Parkes.

• Attacking winger Christiano François has been on a tear of late — in July scoring two highlight goals and has been dangerous in numerous other moments. Last time out against North Carolina FC, he posted a game-high four key passes and has led or tied for the team lead in chances created in the past three games

Maybe part of the reason for the Kickers lackluster effort against Charleston on Saturday could be a bit of a hangover from having played an international friendly against Spanish side Espanyol on Wednesday, July 25 at City Stadium. It was a six-goal affair, with Espanyol coming out with the 4-2 win. 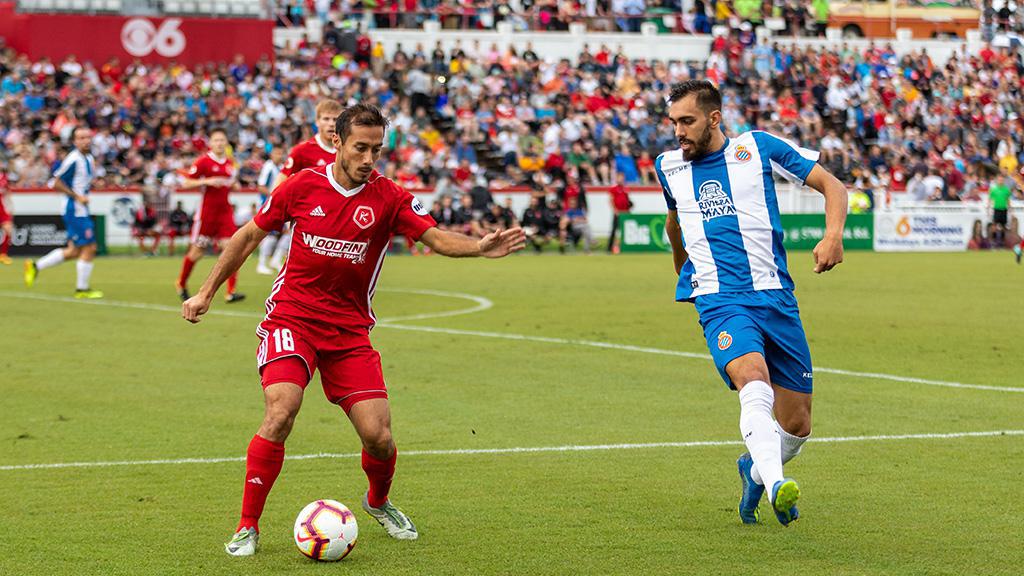 Forward Luiz Fernando (#71) has progressed throughout the year and scored a goal last time out against Pittsburgh. Fernando also unleashed five shots on Saturday, but couldn’t add to his three goals on the year. Midfielder Yudai Imura (#14) has appeared in all 19 games for the Kickers this season, amassing 1,230 minutes. Imura is a distributor in the middle of the pitch and second on the team with 13 key passes. Goalkeeper Trevor Spangenberg (#1) put on a good showing in the friendly against Espanyol with a few saves. The Kickers led 2-1 in the one half he was between the sticks and he started the previous game against Pittsburgh this season.

In case you missed it, prior to the Hounds first game against Richmond, Riverhounds Rabbi Mark Goodman posted a scouting report on the Kickers.

Riverhounds Rabbi Scouting Report: Richmond have holes, but they won’t be pushovers

“It’s a dangerous game to play if you’re not completely focused,” Hounds coach Bob Lilley said. “Margins in this league are so small. There’s no room for error. We weren’t focused the other day. We can’t make it easier for other teams. As staff, we’ll do what we can in terms of coming up with formation, shape and personnel. Both of our next opponents are quite capable teams.”