The Riverhounds SC didn’t waste any time scoring, with three goals in the first 14 minutes en route to a 5-0 rout of Atlanta United 2 on Saturday night in Kennesaw, GA.

With the win, its first in league play since April 13 and its 200th overall as a franchise, the Hounds improve to 3-2-7 overall in USL Championship.

Goals were scored by Robbie Mertz, Steevan Dos Santos, Neco Brett and Thomas Vancaeyezeele, along with an own goal that came from a Christian Volesky cross into the box for the final tally.

Not only did this win break a six-match winless streak (0-1-5), it also was the first time in the Bob Lilley era the Hounds have scored five times. They scored four twice in 2018, but hadn’t gone beyond that level in 127 league games, dating back to the 6-5 ‘Miracle on the Mon’ comeback win over Harrisburg on May 30, 2015.

This was also the first time Pittsburgh had won by five goals since Aug. 9, 2005, when they blanked the Northern Virginia Royals by a 7-0 final. In 19 years of pro soccer, the Hounds have won by five or more just 10 times.

Look for more on this game Sunday, as I’ll provide Analysis & Player Grades.

Nice to see the Riverhounds bounce back against Thailand today

Own goal!  Volesky sends it to center of box, and ATL defender Laurence Wyke slides in — and accidentally redirects it into his own goal.

Anthony Velarde and Christian Volesky are IN. Dos Santos and Neco Brett are OUT. 75′

Hounds keep it alive in unorthodox yet effective fashion — Vancaeyezeele flicks it from right side of goal box inside left post.

8:58 – Hounds with dangerous moment. Mertz finds Forbes on right side of box, Ball in for Dos Santos too hot to redirect and goes over bar.

8:47 – in 54th minute – Hounds called for Handball on edge of box. Not sure if it was Forbes or Greenspan.

Here are the goals:

8:22 – Hounds with another corner, but cleared away by ATL, and counter chance is stuffed out by Hounds back line before it gets too far, and half ends.

The Hounds have held 2-0, 2-1 leads a few times this year. They’ve finally broken through for goal number three only 14 minutes into the match. Lets see how well they can do as they’re probably going to concede more of the ball to a pretty decent possession team.

8:13 – Great 2-on-1 counter chance, Dos Santos plays it to his left for Brett, who rips a shot but saved by ATL keeper.

7:53 – Luiz Fernando (Atlanta United 2) left footed shot from outside the box is saved by Kyle Morton in center of the goal. Assisted by Patrick Okonkwo.

The big fella cleans up the garbage — after Neco Brett’s shot on frame is saved but loose on near post.

7:15:  No surprise on the line-up tonight, as most of the regular starters that rested on Tuesday for the U.S. Open Cup match are back in the Hounds line-up tonight. 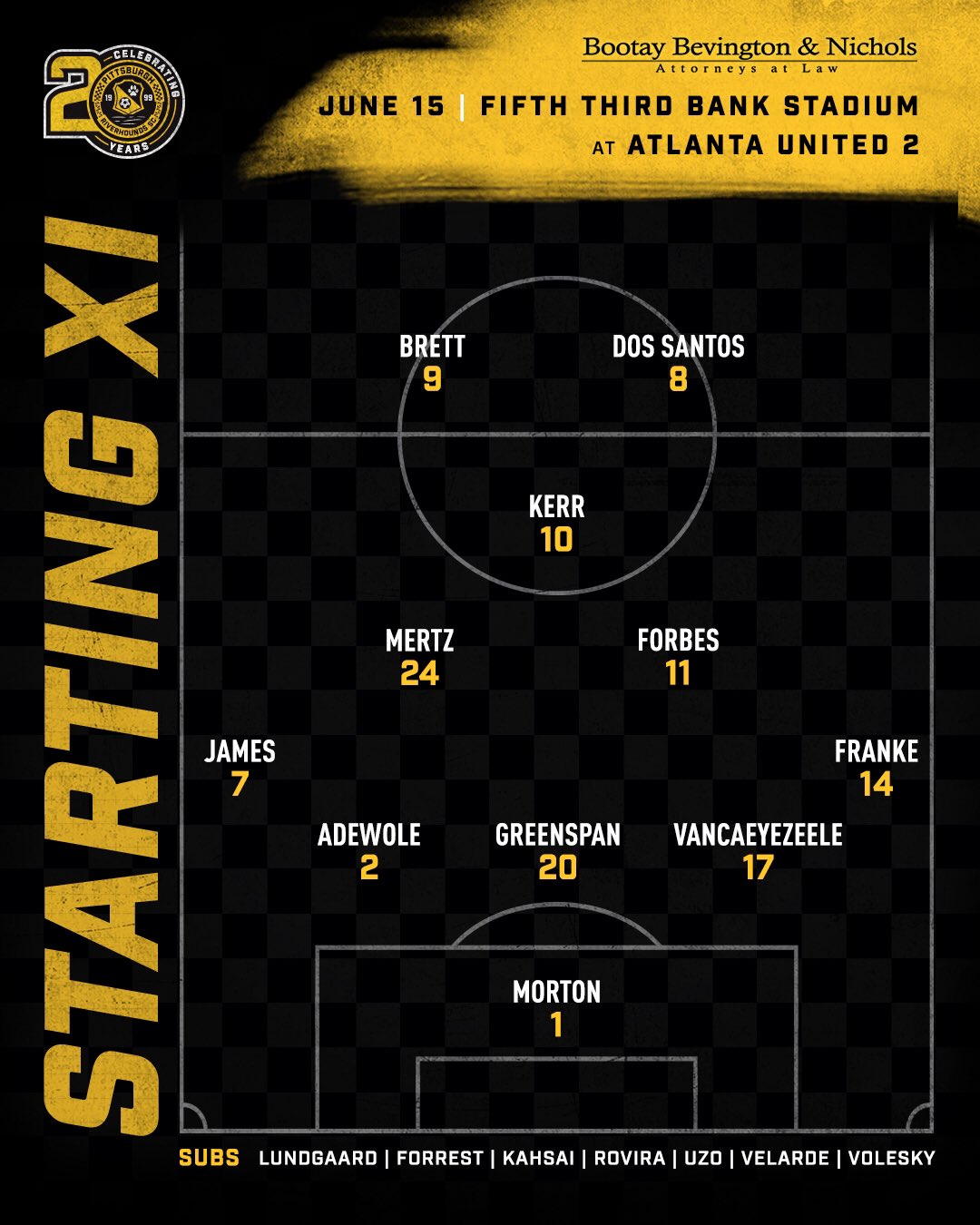 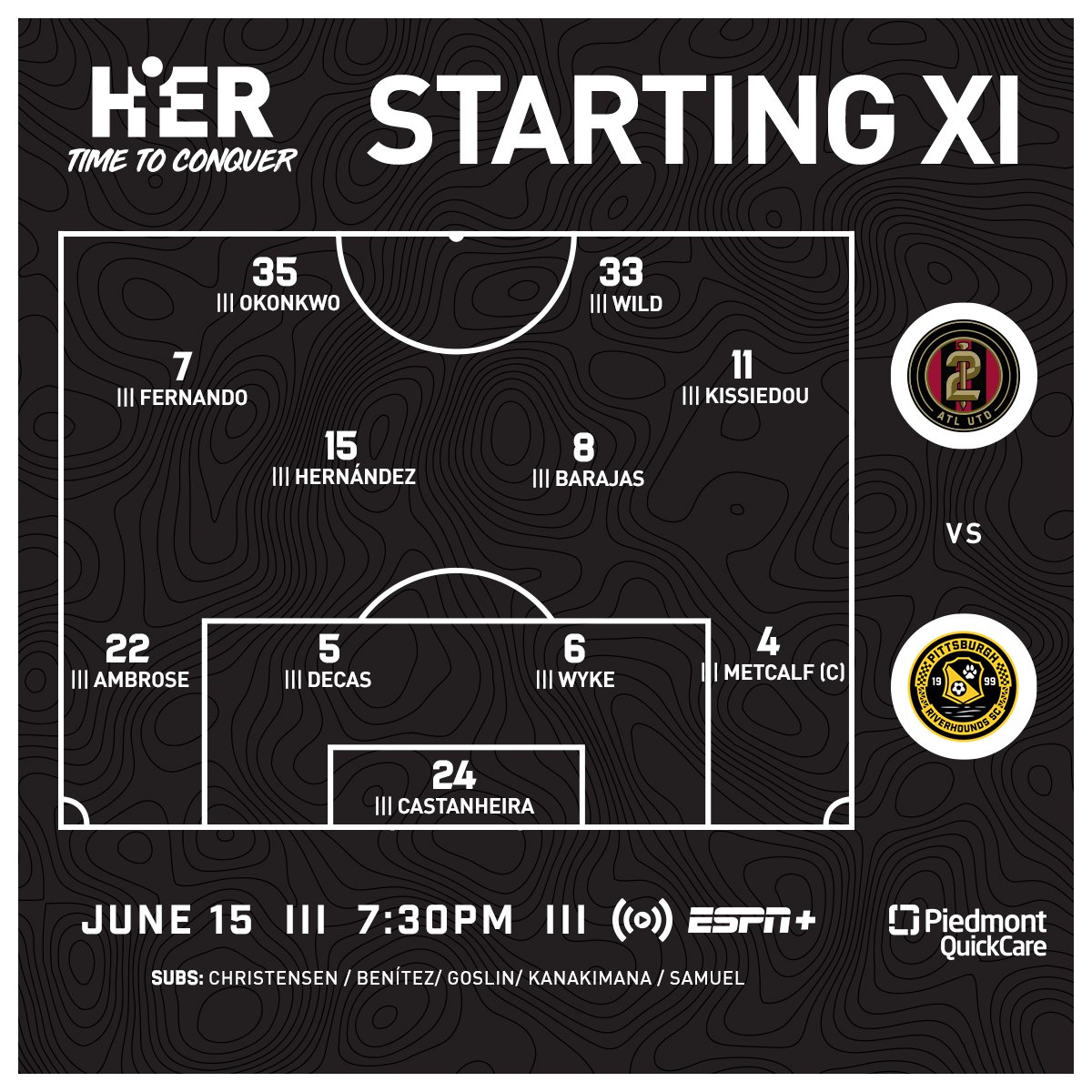 With its next win, the Hounds will reach its 200th all-time victory in club history.

The Hounds head into the match this weekend on short rest, as the team dropped a 1-0 result to Columbus Crew SC of MLS in the fourth round of the Lamar Hunt U.S. Open Cup on Tuesday in Columbus, Ohio.

The Hounds have not won a league match since defeating Hartford in its home opener on April 13. Since then, they’ve gone 0-1-5 in USL Championship matches, while going 2-1 in Lamar Hunt U.S. Open Cup competition.

Meanwhile, Atlanta has not posted a win in its last seven matches. The club also holds a 2-5-0 home record this season.

With MLS still in its international break, Pittsburgh might face an stronger-than-usual Atlanta United 2 side Saturday in Georgia.

about getting 3 points in the ATL! #UNLEASH #ATLvPIT #B2S pic.twitter.com/JkffWAHecJ