We’ll continue to provide the lates updates regarding COVID-19 here as it relates to soccer, USL Championship, and particuarly domestic soccer in the United States here.

We’ll be monitoring the status of the Lamar Hunt U.S. Open Cup as well.  This makes sense from the USL’s standpoint.

U.S. Soccer has not informed non-#USL clubs about the status of this year’s #USOC2020, per sources. The tournament’s first round is scheduled to kick off in less than two weeks.

The United Soccer League announced today the decision to suspend the 2020 season for a minimum of 30 days.

“It was very clear from our owners that the health and safety of players, fans and staff was their top priority,” said USL CEO Alec Papadakis. “In consultation with local, state and national health authorities, as well as the Centers for Disease Control and Prevention and the Department of Homeland Security, we have temporarily suspended match play for a minimum of 30 days.”

When appropriate, the league will provide additional updates on the continuation of the 2020 Championship season and very much appreciate the continued support of USL Championship fans across the country.

MLS suspends season for 30 days. Is USL Championship next?

MLS is suspending its season immediately until further notice due to coronavirus, a source with knowledge of the situation tells Sports Illustrated.

In touch with @RiverhoundsSC coach Bob Lilley this AM, and club officials. As of now, Saturday's match at Charlotte is still on but as Lilley said "that can change" https://t.co/oz2qAgorcN

It was a day like we’ve never experienced on Wednesday, as various major sports entities in the United States took major steps and precautionary measures in response to Coronavirus.

In USL Championship, Tacoma Defiance’s regular season contest between the Defiance and San Diego Loyal SC was played behind closed doors at Cheney Stadium, in Washington.

The #Tacoma Defiance played their match tonight with no fans in attendance. Three fans watched from a hill nearby. @GovInslee announced public gatherings and events of more than 250 people will be banned in three counties to try and slow #coronavirus.https://t.co/gAL9cHLzBi pic.twitter.com/3QqtsVHy8I

That decision followed a Gubernatorial order in the state of Washington delivered in response to an increase in reported cases of COVID-19 within the state. It was also announced on Wednesday that Tacoma’s home match on Sunday, March 22 versus OKC Energy FC is set to be rescheduled for a later date.

Hartford Athletic also announced it had postponed a pair of matches following guidance from local and state health officials. The Athletic’s March 21st match versus the Charleston Battery and April 4th contest versus Memphis 901 FC will be postponed to a later date.

As of Thursday morning, Pittsburgh Soccer Now has been in touch with Pittsburgh Riverhounds SC officials about the status of its upcoming planned season opener in Charlotte.  As of now, the team is planning to practice today at Highmark Stadium, then head to Charlotte for the match. We will continue to monitor and provide any updates as they come.

The match between the Hounds and Charlotte Independence (1-0-0), is scheduled place at 7 p.m. on Saturday, March 14 at Sportsplex at Matthews in Charlotte, North Carolina.

In response to COVID-19 concerns, the United Soccer League announced it has been actively working with the Center for Disease Control and Prevention, Department of Homeland Security, the United States Soccer Federation and other professional sports leagues around the country for weeks to provide the most relevant, up-to-date information on COVID-19 to all of our clubs and stakeholders. USL has also been encouraging all of our clubs to stay in regular contact with their local and state health departments as well as other local authorities.

As the situation evolves, USL will continue to monitor the most recent developments and pass along any and all available information, resources and guidance to clubs, supporters and media as timely as possible.

Your sports balling being cancelling is not something to be outraged about.

Major League Soccer hasn’t quite suspended play yet, but they did issue a statement on Wednesday.

As of Thursday morning, the NBA has suspended its season “until further notice” after a Utah Jazz player tested positive Wednesday for COVID-19, a move that came only hours after the majority of the league’s owners were leaning toward playing games without fans in arenas.

Mt. Lebanon native and Dallas Mavericks owner Mark Cuban was sitting in his usual court side seats when he received the news.

The first impacting announcement came earlier in the day when NCAA President Mark Emmert said NCAA Division I basketball tournament games will not be open to the general public because of concerns about the spread of coronavirus.

Emmert said in a statement that he made the decision to conduct both the men’s and women’s tournaments, which begin next week, with only essential staff and limited family in attendance. The decision comes after the NCAA’s COVID-19 advisory panel of medical experts recommended against playing sporting events open to the general public. 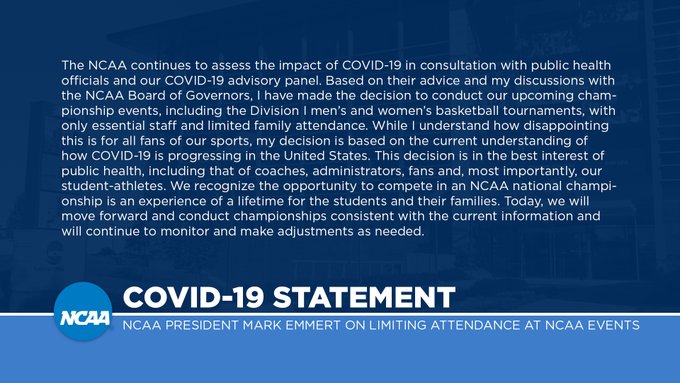 Locally, Robert Morris’ athletic department announced that in compliance with NCAA’s guidelines, the Women’s NEC Tournament will be played at UPMC Events Center with limited attendance.

Pittsburgh Soccer Now will continue to monitor and provide any updates as they come. Please check back on this post for updates throughout the day or follow us on Twitter @pghsoccernow

Reunited with his ‘old family’ Walls ready to be a glue-guy for Hounds
Unprecedented times for local soccer clubs
Loading Comments...