Washington scored the first goal of the contest in the ninth minute, heading a corner kick from sophomore Veljko Petkovic to the left post for the score. The goal was Washington’s first of the season and third as a Panther. The under 10-minute goal was the third-straight contest the Panthers have scored less than 10 minutes into the game.

Mirkovic tallied the first points of his career in the 42nd minute, ripping a low shot from 20-yards out into the back right side of the net. Petkovic found Mirkovic for the score, his third assist of the season and second career multi-assist game of his career.

The game was halted immediately after Mirkovic’s goal due to inclement weather in the surrounding Louisville area. The weather delay lasted near an hour and 15 minutes.

Louisville (1-4-1) cut the Pitt lead to one (2-1), courtesy of Elijah Amo in the 50th minute. Amo took a long ball from Bradley Sample and dribbled 30 yards before connecting with the upper right part of the net.

In the 63rd minute, graduate student Jasper Löeffelsend found open space and sprinted down the right sideline. The Cologne, Germany, native sent a cross to the far post to Noel, who headed it from left to right to the right side of the net for a score. The assist from Löeffelsend was the fifth of the season for the defender and the Panthers extended their lead 3-1.

At the 69:06 mark of the game, Greensburg, Pa., native and Greensburg Central Catholic alum Luke Mort gathered a loose ball at the top of the 18-yard box. Mort created space and hit the upper right-hand corner with his left foot for his first career goal, giving Pitt its fourth goal of the game (4-1).

The Panthers outshot the Cardinals, 12-4, including 6-1 in the second half. Pitt also finished the game with an 8-1 advantage in corner kicks.

Pitt heads back home for the final two regular season fall games of the season. The Panthers next host Notre Dame Friday, Oct. 30 at 6 PM on the ACC Network.

Another victory — and the number one ranked Pitt Panthers remain unbeaten (5-0 overall, 4-0 in ACC)

64′ | GOAL – PITT 3, UofL 1 – Valentin Noel with a beauty!! The Frenchman heads the ball in off a cross from Jasper Loeffelsend and extends Pitt’s lead, 3-1, over Louisville.

A look at Val's fifth goal of the season and Loeffelsend's fifth assist of the year!

While we wait for the weather to clear up, here is that rocket shot from freshman Filip Mirkovic ⚽

Pitt leads 2-0 over Louisville at the break.

42' | Freshman Filip Mirkovic with a ROCKET of a shot into the back of the net!

A ninth minute goal puts the No. 1 Panthers up 1-0 early. 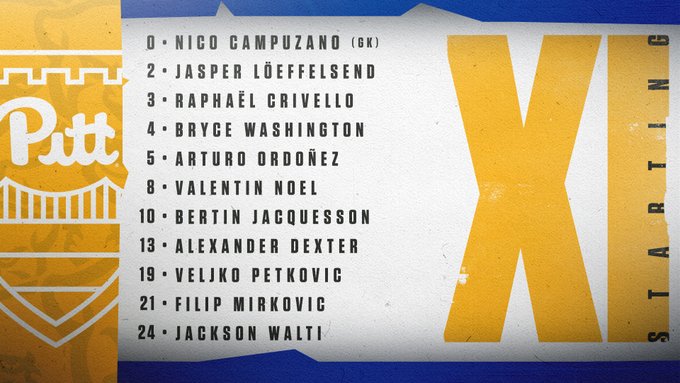 The top-ranked Panthers look to stay undefeated when visiting Louisville on Friday. The game, originally scheduled for 7 p.m. start, has been moved up to 1 p.m. due to incoming, inclement weather to the Louisville metro area.

Due to inclement weather, tomorrow’s ACC road contest at Louisville is now at 1 PM.

The game will be broadcast on the ACCNX 📺 #H2P

This already has been a monumental week for the Panthers, as they achieved their first-ever top-ranking in the United Soccer Coaches poll released on Tuesday. This came after a 2-1, overtime win at Virginia on Sunday evening.

–          Junior forward Pedro Fonseca leads Louisville in goals and is tied for second in the ACC with three scores. His seven points and nine shots are also a team-high.

–          Redshirt senior goalkeeper Jake Gelnovatch has recorded 10 saves in 379 minutes, compiling a 1-2 record between the pipes.

–          Louisville is tied for second in the North Region with four points, sitting side by side with Virginia.

–          Sophomore Arturo Ordoñez headed in the game-winning goal in the 93rd minute against No. 5 Virginia, giving Pitt the 3-2 victory and its second top-five victory of the season.

–          Sophomore Valentin Noel scored twice, both in the first half against the Cavaliers. Ordoñez, along with classmate Raphaël Crivello and graduate student Jasper Löeffelsend, each tallied an assist.

–          The victory was the third straight at Klockner Stadium, dating back to 2018. It was also the third-straight victory over a ranked Cavaliers team.

–          This year has been a milestone season for Pitt, setting new program highs and making school history.

–          The Panthers earned a ranking of number one in the country on Oct. 20 for the first time in program history. Men’s soccer joins football and men’s basketball as the only Pitt athletics teams to earn the No. 1 spot in their respective polls.

PITT RANKED NO. 1 FOR FIRST TIME

–          The Panthers earned the top spot in the most recent United Soccer Coaches Poll on Oct. 20, the first number one ranking in program history.

–          The No. 1 spot is the third time in Pitt Athletics history a team has been number one in the land, joining football and men’s basketball.

–          Sophomore midfielder Valentin Noel has led the offense the past two games and leads the nation in multiple categories.

–          Noel has scored twice in each of his last two games. The two goal games were the first and second mult-score games of his career. He has already surpassed his goal total of three from 2019.

–          The Frenchman has totaled three points in each of his first three games, with highlighted moments including a goal at both Notre Dame and Syracuse and three assists at home vs. Virginia Tech.

–          For his two goal performance at No. 5 Virginia, sophomore Valentin Noel was recognized by the ACC as Co-Offensive Player of the Week on Oct. 19.

–          Noel joins teammates Bertin Jacquesson, Arturo Ordoñez and Veljko Petkovic on being named ACC Player of the Week. Both Jacquesson and Ordoñez were named Co-Offensive and Defensive players, respectively, on Sept. 28, while Petkovic was named Offensive Player of the Week on Oct. 12.

–          Both sophomores Valentin Noel and Arturo Ordoñez were tabbed TopDrawerSoccer Team of the Week for their performances at No. 5 Virginia.

–          Noel’s two goal performance – both in the first half – and Ordoñez’s game-winning header aided Pitt’s top-five victory over the Cavaliers.

–          The ACC Men’s Soccer Tournament begins Sunday, Nov. 15 and runs through Sunday, Nov. 22. -The top four teams from each region advance to the tournament.

–          The quarterfinals and semi-finals will be held at participating host schools, including Duke, UNC, NC State and Wake Forest. The championship game will take place at WakeMed Park in Cary, N.C.