Photo courtesy of University of Pittsburgh

For the second week in a row, the No. 5 University of Pittsburgh men’s soccer team prevailed in double overtime, this time off the foot of senior forward Alexander Dexter to defeat Virginia Tech, 2-1, on the road Saturday evening.

“I am very proud of the resilience demonstrated from the group tonight,” said head coach Jay Vidovich. “We started out with the goal in the first half but we let the game slip in the second half in a very critical moment, but they showed the mental toughness and intensity to come back in overtime and win the game. To do that on the road with all the delays that happened today I am just really proud of their mental toughness and the way they stayed in the game.”

Pitt recorded three shots in the first 40 minutes compared to Virginia Tech’s (6-4-2, 3-5-2 ACC) one. Noel scored the first goal of the game in the 43rd minute, taking a pass from freshman Luke Peperak for his 11th goal of the season. The assist for Peperak was the first point of his collegiate career. The Panthers led, 1-0, after 45 minutes.

Pitt had a 6-1 advantage in shots in the first half. Both teams had zero corner kicks.

The score remained 1-0 through 40 minutes of action in the second half. The Hokies scored the equalizing goal in the 86th minute, as Jacob Labovitz tied the game up at 1-1. It remained tied after regulation. The shot total was flipped in the second half of play, with Virginia Tech leading in shots, 6-1.

Both teams played 10 minutes of scoreless ball in the first overtime and forced a second overtime, the second double OT game for the Panthers in as many games. Just two minutes into the second OT, senior Alexander Dexter received a pass from freshman Filip Mirkovic and scored the game-winning goal, giving Pitt a 2-1 victory. The goal was Dexter’s third of the season and 14th of his career, while the assist was Mirkovic’s second of the year.

Pitt outshot the Hokies, 11-5 for the game and led in saves 4-3. Both teams registered three corner kicks.

The Panthers return home and finish out the spring regular season with two straight home contests. Pitt’s next match is Saturday, April 3 against Notre Dame at 7 p.m., followed by a mid-week contest against Virginia Thursday, April 8 at 7 p.m. Both games will be live on the ACCNX.

The Panthers improve to 11-2 overall (7-1 in ACC regular season) and will now finish the Spring campaign with two matches at home as they continue to make a quest to earn a high seed in the NCAA tournament.

30′ | Valentine Noel with 2 shots, Jasper Loeffelsend and Jackson Walti with 1 each for Pitt.

13′ | Header flicked on by Sivert is handled by Pitt’s keeper. Rain has the ball moving quick on the pitch this evening.

6:30 p.m.  after a 5-hour delay, the teams are back at it resuming play in the early part of the first half.

Today's match against against the Hokies has been pushed back to a 6:30 PM start.#H2P

Noteable: First start of the season for junior Rodrigo Almeida with Veljko Petkovic sitting out after being sent off last week vs Duke. 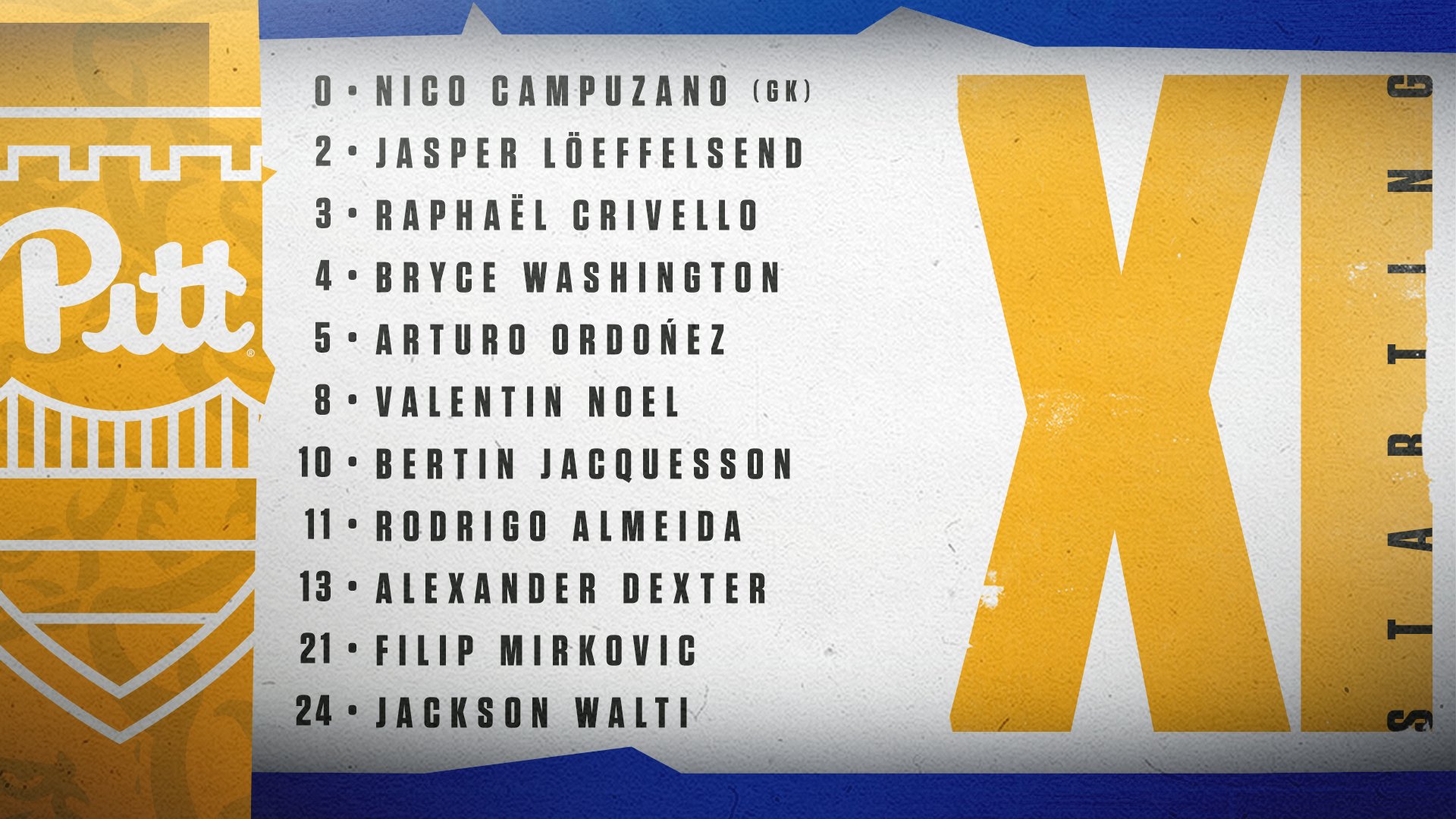 Look for lineups and gameday updates to be posted here.

–        Graduate student Jasper Löeffelsend and freshman Bertin Jacquesson each tallied three assists in the game, a mark tied for second in school history for a single game.

–        Senior Jacob Labovitz leads the team in goals (5) and points (11) along with shots (32) and shot percentage (.156). Labovitz ranks first tied for first in the ACC and tied for fifth in the nation in game-winning goals with three.

–        Junior Sivert Haugli leads the back line for the Hokies, totaling 1,029 minutes in 11 games played. Haugli has one goal, three shots and one shot on goal for the year.

A THRILLING 2OT VICTORY IN DURHAM

–        The Panthers and Blue Devils played 107 minutes Mar. 19 in Durham, N.C., with Pitt prevailing 4-3 in double overtime off a game-winning header from sophomore Arturo Ordoñez.

–        Pitt trailed, 1-0, early before scoring three unanswered goals to take a 3-1 lead in the second half. Duke came back with two unanswered goals of their own and tied it 3-3 after regulation. Ordoñez’s goal in the 107th minute was his second of the season and second game-winning header of the year, previously doing so at Virginia Oct. 18, 2020 in the 103rd minute.

THE ACC NO. 1 SCORING OFFENSE

–        Pitt enters the Virginia Tech match with the number one scoring offense in the conference with a 2.42 goals per game mark.

JASPER SENDS IT IN

–        Graduate student Jasper Löeffelsend has emerged as one of the best passers in the country, finding his teammates on seven different occasions this season for goals.

–        The Cologne, Germany, native’s seven assists are tied for first in the ACC and second in the nation.

–        Löeffelsend recorded an assist vs. Boston College Mar. 13 in the lone goal of the 1-0 shutout for his first of the spring campaign.

–        Campuzano’s seven saves in the ACC Championship Final earned him a new career-high.

–        Campuzano has registered six games with four or more saves and three games with six or more stops on the year.

–        Campuzano delivered a clean sheet against Boston College at home Saturday, Mar. 13, making four stops for his second shutout of the season.

–        The Cantabria, Spain, native has 38 saves on the season and two shutouts to his credit. His 38 total saves is first in the ACC and seventh in the nation.

–        Sophomore Valentin Noel garnered ACC Co-Offensive Player of the Week honors this past week for his two goal performance at Duke Mar. 19.

–        The midfielder totaled two shots, two shots on goal and two goals, his third multi-score game of his career.

–        Noel was also recognized by TopDrawerSoccer, earning a spot on the Honorable Mention Team of the Week. The honorable mention spot is his second of the season, previously doing so Oct. 13, 2020.

–        Pitt returns home for its final two games of the season. The Panthers host Notre Dame Saturday, April 3 at 7 PM and Virginia Thursday, April 8 at 7 PM.