The Pitt Panthers are headed to its first ever College Cup with 3-0 win over Washington to continue its historic season.

In a tightly contested affair, only broken open by two late wonder goals from the middle of the field with the Huskies’ goalkeeper Sam Fowler pulled way off his line, Pitt secured its record-breaking 16th win of the season and advanced to the NCAA Tournament’s National Semifinal round, where they’ll take on No. 3 Indiana (Friday, May 14 – 8:30 p.m.).

“Tremendous effort by the guys today,” Pitt’s head coach Jay Vidovich said. “We fought when we had to fight and we found the back of the net and a way to get a result. I am very proud of them and I think we did a great job of taking our opportunities controlling the match and managing it and with exceptional goals. We’re looking forward to the opportunity to compete in the semifinal.”

“We found a way to get a result,” Pitt’s Head Coach Jay Vidovich said. “I am very proud of them.  I thought we did a great job of creating opportunities. Controlling the match and managing it. And there were some exceptional goals there.”

The teams played to scoreless tie through the first 45 minutes, with each side generating a chance which had shots banging off the crossbar.

In the 27th minute, during a stretch of play when Pitt was seemingly in control, dominating possession and playing on the front foot, Petkovic had room to shoot from the top of the box, but his shot careened off the bar.

That would be Pitt’s best chance in a half where they outshot the Huskies, 6-1 (3-0 on target). Still, the Panthers had to withstand their share of dangerous moments as UW pushed forward on counter chances and drew a number of fouls and earned corner kicks, resulting in providing added pressure on goalkeeper Nico Campuzano.

Pitt’s keeper was called to come off his line many times throughout the match.

The Huskies started the second half with a few more opportunities, including a free kick and ensuing corner kick in the 46th minute.

Eventually, Pitt would regain its hold on the match with extended possession and build-up — stretching the Huskies out just enough to find an opening.

That moment came in the 52nd minute, when ACC’s Defensive Player of the Year Jasper Loeffelsend had time and room to deliver a pinpoint cross into the box for Pitt’s leading scorer, Valentin Noel.

The sophomore from France redirected his header into the back of the net to give the Panthers the 1-0 lead.

Valentin Noel's goal in the 52nd minute was his 14th of the year.

Noel ranks second in the nation in goals scored. With one more, he would tie Oregon State's Gloire Amanda for the national lead.pic.twitter.com/Q2wyhiNTQN

The Panthers rode some additional momentum after the goal, but Washington persevered.  The Huskies would begin to mount more pressure, eventually turning the tables of the match to force Pitt’s formation into a defensive mode.   The Panthers began absorbing more crosses and with every foul or clearance in the final third, giving way to another UW corner, free kick or long throw attempt into the goal box.

Campuzano remained poised, coming off his line numerous times to win balls in the air and deny shot opportunities for the Huskies.

As the match came down to the final moments with Pitt clinging to a 1-0 lead, Campuzano then made his biggest save of the match, extending his leg to deny UW’s Dylan Tevas’ short range shot from the left side.

88' | Teves' shot is touched JUST enough to go wide, what a chance!

On the following corner kick, the well fortified Panthers denied the Huskies any chance to get a shot away.  In fact, on Pitt’s clearance, holding midfielder Jackson Walti found Bertin Jacquesson breaking along the left sideline.

Jacquesson managed to get a solid touch, then noticed that UW’s keeper Sam Fowler was retreating back after coming up for the corner kick and left the goal open.  The freshman from France then sent a perfectly placed long ball forward and into the open net to give the Panthers a 2-0 lead.

Lightening struck twice in a matter of a minute for the Panthers, as Petkovic, who missed one in the first half off the bar, redeemed himself with a wonder goal of his own. Again noticing that Fowler had come off his line, the midfielder from Serbia drove a high, looping ball toward goal from the center circle area.

It was a perfectly placed ball, sailing over the extended arms of Fowler to give Pitt the icing on the cake goal and set off a celebration in the 90th minute.

The Pitt men’s soccer team finally reached the College Cup — a first in program history — in Jay Vidovich’s sixth year at the helm of the program.

"The Pittsburgh Panthers, for the first time in program history, are in the College Cup!"#H2P pic.twitter.com/cmSXpsx5cq

Making program history ✅@Pitt_MSOC claims the victory over Washington, 3-0, advancing them to their first #CollegeCup!#NCAASoccer pic.twitter.com/KOzyMlRN7l

PITT WINS! The Panthers are headed to the #CollegeCup with 3-0 win over Washington to continue its historic season with. Goals from Valentin Noel, Bertin Jacquesson and Veljko Petkovic!

90- — PITT 3, UW 0 — ITS A WONDER GOAL from Veljko Petkovic from midfield as Sam Fowler was off his line.

82′ — Pitt’s starters coming back into the match Jacquessen, Dexter and Petkovic for Bailey, Mort and Peperak.

I’d love the stat for the number of times Pitt’s keeper Nico Campuzano’s had to go up to secure a high ball into the box.

79′ — Pitt doing a lot of defending as UW bringing more pressure. Last chance comes with shot goes off Husky teammate, but ref calls UW off side.
Little more possession would help the Panthers in final 10 minutes.

57′ –Two subs for Pitt needing more energy on the width…

IN: Matt Bailey and Luke Mort
OUT: Bertin Jacquessen and Alexander Dexter

Valentin Noel with the header goal.  Cross in from Jasper Loeffelsend And just like that — Pitt takes 1-0 lead

Pretty well played 45 minutes between teams with contrasting styles. Pitt with edge in shots (6-1, 3-0 on target) and possession, but UW showing can be dangerous on set pieces & on counter

42′ — Pitt gets forward with some nice combination passes. Petkovic find Noel on right side but shot/cross is gobbled up by Fowler.

35′ — Tables have turned in past few minutes. Washington threatens a few times on set pieces.

32′ — Another foul for Pitt – on Crivello – and now free kick from appox 28 yards out for UW. Campuza

28′ — Panthers getting into a rhythm here — Jacquesson gets a shot from right side. Saved by Fowler.

27′ — Petkovic hits the bar!!! Terrific patience by Pitt leads to shot opportunity from top of box, but match remains scoreless.

22′ — Pitt’s holding possession edge, and have been very patient, as UW defending well inside the box. They finally earn a corner, but second ball to Ordonez is cleared.

11′ — Loeffelsend YELLOW CARD for coming in a bit late on slide tackle.

Somehow a thru ball from Mirkovic gets to Loeffelsend — and shot is saved by Fowler. Pitt looking good in getting forward there. 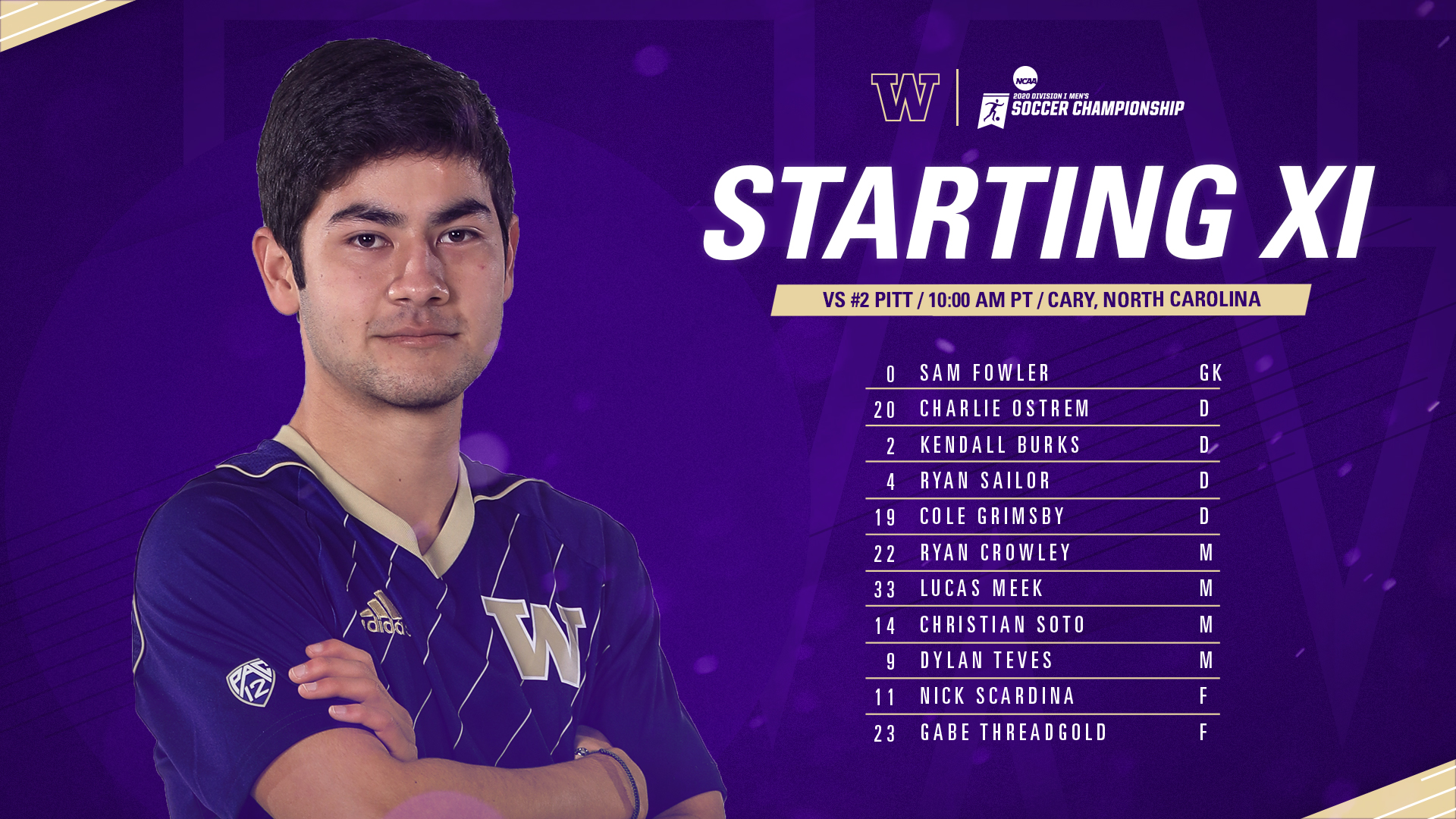 Look for starting lineups to be posted here shortly before 1 p.m.   We’ll also provide in-game updates there too.

The Pitt men’s soccer program is on the doorstep on reaching the promised land.  With a win on Monday, the Panthers will earn its first-ever appearance in the NCAA College Cup National Semifinal.

In fact, Washington is in the same boat, as this is their third appearance in the Elite Eight, but they’ve also never reached Men’s Soccer’s edition of the Final Four.

Pitt has been ranked in the top five of the United Soccer Coaches Poll for much of the season, even spending two different periods at the No. 1 spot in both the fall and spring portions of the 2020-21 extended season.  With No. 1 seed Clemson losing to Marshall, Pitt and No. 3 Indiana are the top seeded schools remaining among the Elite Eight.

This is expected to be a difficult match-up and a different challenge for Pitt.

The Panthers have been riding high led by its dynamic attack in the second and third rounds, with dominant wins over Monmouth and Central Florida by a combined 10-1 score line. Washington has advanced this far with strong defense and opportunistic scoring, particularly in creating chances from set pieces and service into the box.  This is a battle-tested team (see preview below) which has also beaten teams ranked in the top five this season (wins over Stanford and Oregon).

Pitt Head Coach Jay Vidovich has reached the College Cup multiple times in his previous tenure at Wake Forest, where he won a National Championship.

–        Campuzano’s seven saves in the ACC Championship Final earned him a new career-high.

–        Campuzano delivered a clean sheet against Boston College at home Saturday, Mar. 13, making four stops for his second shutout of the season.

–        Campuzano totaled a career-best 10 saves in Pitt’s 4-0 shutout victory over UCF in the NCAA Third Round. He saved six shots in the first half and four in the second.

–        Campuzano has registered eight games with four or more saves and four games with six or more stops on the year.

–        The Cantabria, Spain, native has 61 saves on the season and five shutouts to his credit. His 61 total saves is first in the ACC and 3rd in the nation.

–        Campuzano’s broke the single-season school record for wins with his 15th against UCF. Campuzano passed Adam Spitzer’s record of 14 set in 1995.

–        The MAC Hermann Trophy is college soccer’s most prestigious award, given to the top player in the country.

–        Noel and Löeffelsend are two of 15 semifinalists and the only ACC representatives.

–        Pitt is also the only team representing more than one player.

–        The Pitt Panthers and Washington Huskies meet for the first time in program history Monday.

–        This is the third-straight contest in which the Panthers meet their opponent for the first time (Monmouth, UCF).

–        Washington enters the quarterfinal round as the No. 7 seed, holding a 12-3 overall record. The Huskies finished 7-3 in Pac-12 play this year and earned second in the Pac-12 regular season standings.

–        Washington’s resume includes two top-5 wins over No. 2 Stanford (1-0) and No. 3 Oregon State (2-1) earlier this season. The Huskies recently defeated Grand Canyon and Missouri State, 2-0 each, in the NCAA Second and Third rounds, respectively.

–        Washington is led by junior defender Charlie Ostrem, who received Pac-12 Defensive Player of the Year honors. Ostrem is currently second in the nation with 11 assists and sixth in assists per game (.73). He also has one goal and 13 shots on goal this year.

–        The Huskies are led offensively by junior Dylan Teves, who earned All-Pac-12 First Team honors. Teves has seven goals, five assists, 36 shots and 17 shots on goal for the season.