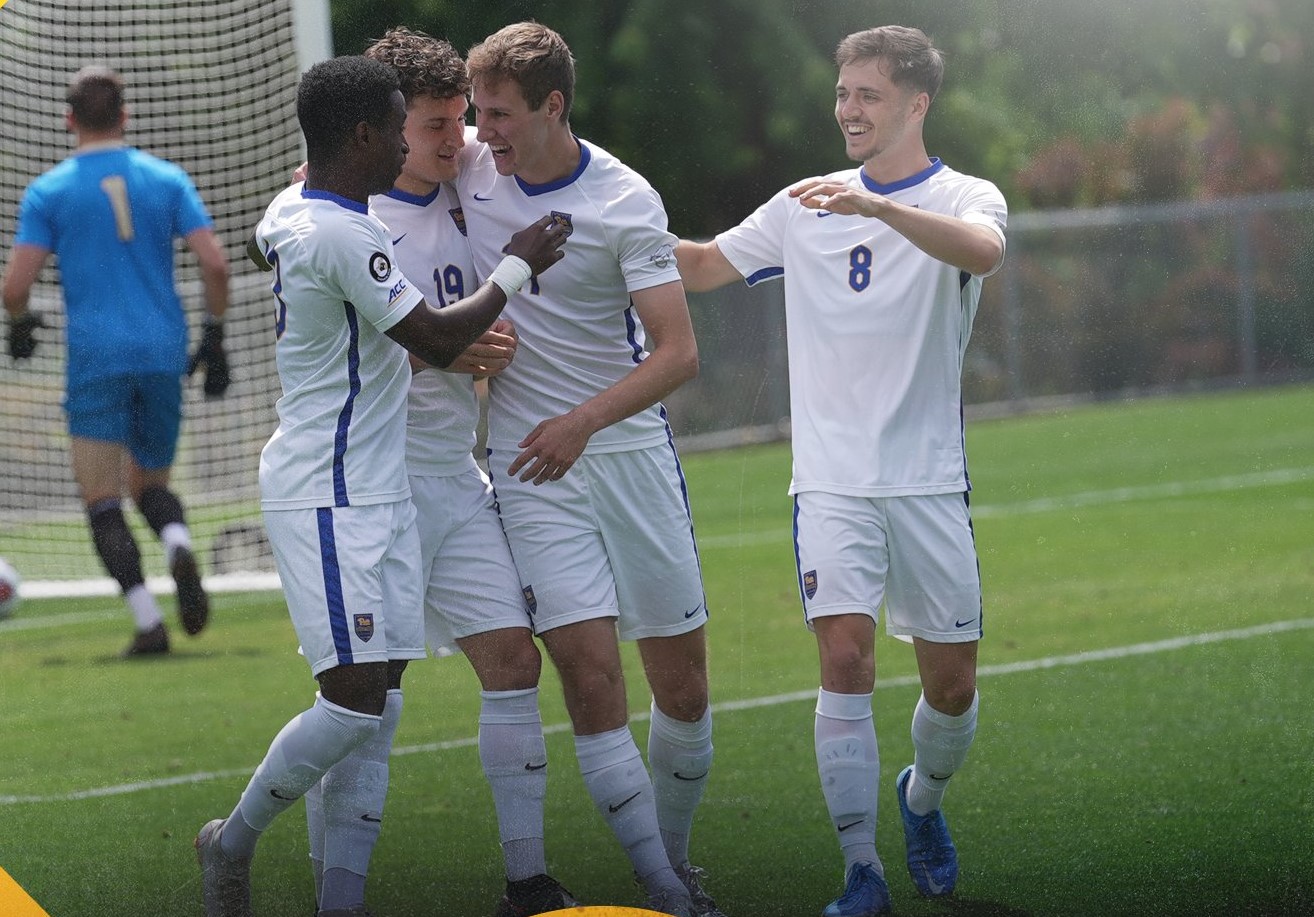 The Pitt Panthers men’s soccer team didn’t have to worry about any early game jitters, as they scored early and often in the first half on their way to beating Central Florida in the NCAA Men’s Soccer Tournament’s third round on Thursday at WakeMed Park.

With the win, No. 2 seed Pitt now advances to take on No. 7 Washington, who advanced earlier in the day by beating Missouri State, 2-0.

The Panthers punished the Knights with an unrelenting high press scoring on its first three shot attempts in the match.

“We believe in our collective defending and pressing by our front-runners,” Pitt’s Head Coach Jay Vidovich said. “We knew they like to build out and play like we do. We felt like we could press them, and certainly our attacking guys bought into it. We might have tweaked one little thing, but we were very effective finishing in the final third.”

First, it was Veljko Petkovic who found a loose ball on the edge of the box after teammates Valentin Noel and Filip Mirkovic forced a turnover.

Petkovic found plenty of room to slot the game’s opening goal just 22 seconds into the match.

"WHAT A START FOR THE PANTHERS!"

Twelve minutes later, Alexander Dexter converted a cross from deep on the right side from Bertin Jacquessen to double the lead.

In the 23rd minute, another mistake in the back for UCF led to another Pitt goal, with Petkovic again capitalizing.

Never mind that UCF would match and even out-possess and outshoot (8-3, 5-3 on target) the Panthers in the first half.  Pitt continued to force the Knights into mistakes when it mattered most.

“It wasn’t necessarily breakdowns,” Vidovich added. “They’re very good as moving the ball. The scoreline flattered us. Their goalkeeper is fantastic. Their backline is fantastic under pressure. Their defensive midfielder (Yoni Sorokin) is very good with building out.  I just don’t think they played with experienced pressure.  We’ve dealt with it”

The Panthers would convert another goal in the second half, as Noel pounced on another attempt by UCF to play the out of the back, when he crashed the goal area, beating goalkeeper Yannik Oettl to the ball.

Coupled with the 6-1 second round win vs Monmouth on Saturday, Pitt has outscored the opposition 10-1 in the first two games of the NCAA tournament.

It doesn’t come as a complete surprise to Vidovich.

“We’ve had moments throughout the year, in the fall and spring, where we’ve been pretty efficient with our goal scoring, so I am not surprised,” Vidovich said. “Did I expect it this time, no.”

he Panthers improved their overall record to 15-3. The 15 wins is a program record for victories in a single season, surpassing the previous mark of 14 set in 1995.

–        Sophomore Veljko Petkovic scored the first goal of the game 23 seconds in, the fastest goal in Pitt men’s soccer history. Petkovic finished the day with two goals and now has two goals and two assists in his last two games.

–        Sophomore Valentin Noel, who was named a MAC Hermann Semifinalist earlier this week, scored his 13th goal of the season. The midfielder entered the match third in the country in total goals scored.

–        Graduate student Nico Campuzano earned his fifth shutout in goal with a career-high 10 saves. His 10 saves tied for ninth for a single game in program history.

–        Pitt’s 134 points as a team is a school record for a single season. Pitt’s single season record for goals scored is 55. The Panthers currently have 48 for the year.

79′ — Pitt’s Nico Campuzano forced into a save.

Valentin Noel converts!  Another blunder out of the back for UCF — as ball played across the end line for keeper from defender results in Noel flying into the box to poke the ball into far post side!

63′ — The Panthers have been fairly methodical in possession but not too aggressive with trying to create shot opportunities.  Finally, Jacquessen gets forward a couple times — one shot is saved another pass goes over to Noel for shot that bangs off bar.

That shot difference — for Pitt — it’s been all about execution and making the most of its chances, while punishing UCF for mistakes.

Giving it everything we've got in the second stanza 😤 #ChargeOn

Quick observation as first half comes to close…

Remarkable thing about this match, Pitt has let UCF play. The Knights have outshot Pitt 8-3 (5-3 on target).

The Panthers have made their opportunities count converting on all three shot attempts.

More high pressing from Panthers as Valentin Noel beats keeper to the ball on attempted clearance in the box, the ball comes to Petkovic who has no problem slotting it into the open net.

"1⃣2⃣ minutes in, Alexander Dexter has put the Panthers two nil up!"

Dex with the cool finish after a nice cross from Bertin.#H2P pic.twitter.com/u5jwiVfbSr

Alexander Dexter!  The cross came from deep on the right side from Bertin Jacquessen — as ball got through to Dexter who was alone in the box for the clinical finish!

"WHAT A START FOR THE PANTHERS!"

Veljko Petkovic!  High press forces a UCF turnover. It was both Valentin Noel and Filip Mirkovic bringing the pressure — and ball comes to Petkovic who had room to maneuver into the box for a nifty finish. You can view the interactive NCAA Tournament bracket here and the printable bracket here.

Pitt continues on its quest to go further than it’s ever gone before in the NCAA men’s soccer tournament. On Sunday was another program first, as the Panthers beat Monmouth to advance to its first-ever Sweet 16 appearance.

The Panthers will have a tough challenge on Thursday in facing the AAC champs, Central Florida, who’ve not lost a match since early February and appear to be getting better with each match.

Yesterday, we previewed this match in more detail.

–        In its fifth NCAA Tournament match in program history, Pitt defeated Monmouth, 6-1, Sunday in the NCAA Tournament Second Round for its second tournament win in school history.

–        Sophomore Valentin Noel scored the first and eventual game-winning goal in the 25th minute, while classmate Veljko Petkovic had two assists for the evening.

–        The Pitt Panthers and Central Florida Knights meet for the first time in school history Thursday.

–        This marks the second-straight contest the Panthers face an opponent for the first time. Pitt saw Monmouth in the second round last match.

–        The Knights began the season 1-3 and since have gone 8-0-1. They finished 7-3 in AAC play and won their respective conference championship tournament.

–        The Panthers earned its highest spot in program history in the NCAA Tournament, receiving the No. 2 overall seed.

–        The Panthers enter with a record of 1-3 in the NCAA Tournament. Pitt’s first NCAA Tournament victory came last season at home against Lehigh (2-0).

–        The MAC Hermann Trophy is college soccer’s most prestigious award, given to the top player in the country.

–        Noel and Löeffelsend are two of 15 semifinalists and the only ACC representatives.

–        Pitt is also the only team representing more than one player.

–        Senior Bryce Washington was recognized on TopDrawerSoccer’s Team of the Week for his performance against Monmouth in the NCAA Tournament Second Round.

–        The Atlanta, Ga., native scored his fourth goal of the season with a header in the first half of Pitt’s 6-1 defeat of the Hawks.