The Riverhounds SC finally returned home, but against an old nemesis the result remained same as the Charlotte Independence continued its dominance of Pittsburgh, with a 1-0 win on Saturday night at Highmark Stadium.

The Independence spoiled the Riverhounds SC’s much anticipated home opener played before 2,079 fans, as Irvin Parra’s first half goal held up for the road team, despite the Hounds holding a 3-to-1 margin in shots and owning 58 percent of possession.

“It was a tough home opener,” Riverhounds SC Head Coach Bob Lilley said. “I think Charlotte’s in pretty good form right now. Nevertheless, it’s disappointing to get the fans out here, and not deliver.”

With the loss, the Hounds fall to 0-2-1 overall record, and in 12 tries in the all-time series (0-7-5) against the Independence, Pittsburgh still has yet to earn three points.

The Hounds outshot Charlotte, 21-8, and had 57 percent of possession in the match, a number aided by the Independence playing down a man after Christian Dean was sent off in the 66th minute.

Hounds goalkeeper Danny Vitiello was the star of the early stages of the match, as he made all four of his saves within the first half hour of the game.

The highlight came in the 15th minute when he denied Charlotte’s Brandt Bronico and Jake Areman in quick succession, making a leaping stop on a breakaway and then going to ground to stop the second shot on the rebound.

Vitiello also denied a close-range header by Kevin Riascos, but he was finally beaten by Parra’s header in the 34th minute, which was Charlotte’s last shot on goal in the match.

Russell Cicerone nearly tied the match with two minutes left in the half, as he cut into the box on his left foot, but his low, hard shot was denied by goalkeeper Brandon Miller.

Chances began to pile up for the Hounds after the break, beginning with Preston Kilwien heading a corner kick on goal in the 53rd minute, only to have Bronico head it off the line.

Charlotte then went down a man in the 66th minute after Dean picked up his second yellow card of the game for a high elbow.

The Hounds kept the pressure on, outshooting Charlotte after the break, 16-2, but they couldn’t break through the compact Independence defense.

The game ended with Miller making an outstanding fifth save for Charlotte, as he denied Albert Dikwa’s header at the back post on the end of a long, diagonal ball from Louis Perez.

Attendance at Highmark Stadium was a sellout total of 2,076, which was the maximum number of fans allowed under current Pennsylvania physical distancing guidelines.

Danny Vitiello had it easier in the second half, but his four-save first half effort kept Charlotte from getting more than one goal before the Hounds could take control of play.

The Hounds go on the road to face New York Red Bulls II on Friday, May 28, at 7 p.m. at MSU Soccer Park in Montclair, N.J. New York is 1-2-1 on the season and faces the Charleston Battery tomorrow.

90++ — Dikwa gets a nice feed at top of box, feeds Dover breaking on right side with space. Sends bending cross (could’ve taken shot) — and no one there for it.

79′ – Paravicini booked for Charlotte after he swept Vitiello’s leg out from under him after the GK had made the catch.

76′ — Dover fouled on right side of box. Free kick to center of scrum but header misses over bar.

74′ — With Steel Army behind them in Paul Child Stand. Hounds are mounting some pressure. Back-to-back corners — second one Mekiel Williams header at far post goes wide left.
68′ — HOUNDS SUBS:
IN — Tommy WIlliamson, Jordan Dover, Todd Wharton
OUT — Anthony Velarde, Louis Perez, Preston Kilwien
66′ — DOUBLE YELLOW and Charlotte’s Christian Dean is sent off for dangerous elbow to Hounds’ Danny Griffin.
Attendance — 2,079
65′ — Free kick for Hounds.
60′ —  Yellow Card! Hounds MF Todd Wharton is booked after late tackle, after Hounds give away another ball in final third.
52′ — Great chance for Hounds. Coming on corner — redirected header from Preston Kilwien was headed off line by Charlotte defender Brandt Bronico.
HALF — CHARLOTTE 1, HOUNDS 0
Irvin Parra’s tally is the difference.
Charlotte’s been the better side.
The Hounds are struggling to connect the dots in the final third and need to tighten things up in the back.
Some halftime stats:
Shots:  CLT 6-4 edge (5-2 on target)
Possession: CLT 54% PIT 46%
43′ — On target! Russell Cicerone gets into box — and left footed blast is saved by Miller. Great save. Best chance of match for Hounds.

A one-time finish!
Dimick was played a nice ball over the top from Marcelo Palomino.

32′ — Hounds are starting to get a little more into rhythm in possession. Latest advance ends with nice diagonal ball to Cicerone on right side, then ball for Danny Griffin breaking into box is deflected as the Hounds MF attempts shot. The shot got through but missed left.

16′ — Crazy sequence as Danny Vitiello makes a pair of nice saves. First Brandt Bronico tries to chip it over, but Hounds keeper gets up real high to tip save it. Then has to sprawl to ground to stop a second attempt.

14′ — Hounds with free kick from left side — about 35 yards from goal.  Taken by Todd Wharton — to far post second ball bounces in front of net area, but Miller there to grab it.

8′ — Nice build up after turnover at midfield for Hounds — ends up to Dikwa in the box, who turns and shoots. Miller there with the save. 8′

Look for gameday updates to be posted here.

Not a better a scene in sports in my opinion…….@RiverhoundsSC and @Independence about to start in 10 minutes. Follow @pghsoccernow for the in game action. #UNLEASH #PITVCLT pic.twitter.com/POrTz4lisV 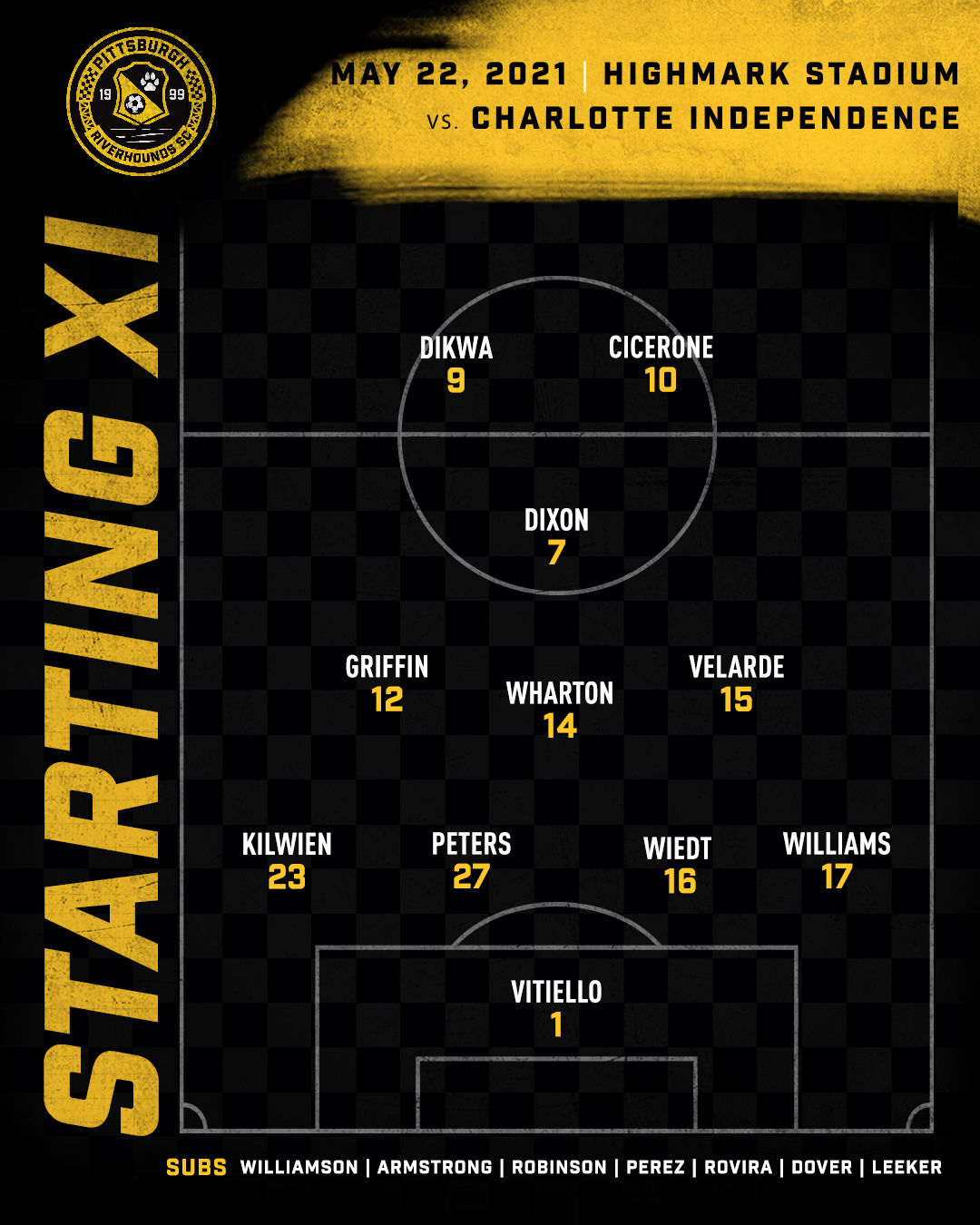 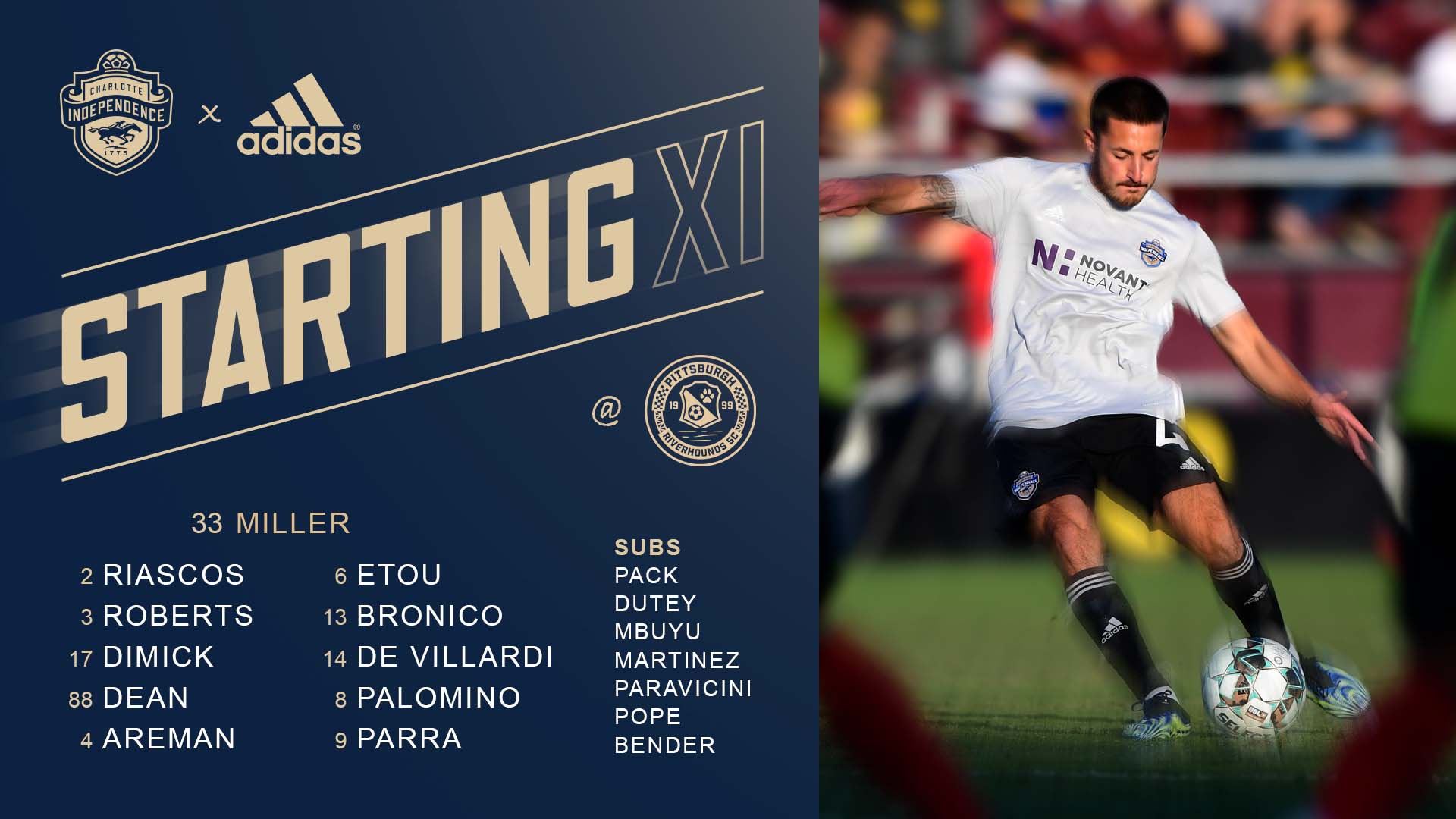 Saturday’s coverage team will include John Krysinsky, Matt Gajtka, Mark Goodman and Ed Thompson — who will all be at Highmark Stadium.

Live Pregame show will be on our Facebook page at approximately 6:25 p.m.

Look for postgame interviews and our postgame reaction on Pittsburgh Sports Live.

Hounds Notebook: Home opener can recapture ‘missing energy’ for club and its fans