In an entertaining match the Pittsburgh Hotspurs won its third straight match, outlasting and holding off the Rochester Lancers in a National Premier Soccer League game at Charlies A. Schiano Sr. Field at Aquinas Institute in Rochester on Sunday evening.

With the win, the Hotspurs remain near the top of the NPSL’s Midwest Region’s Rustbelt Division standings with 12 points (trailing only Cleveland SC, 13 points).

It was Owain Hawkins who snapped a 2-2 tie in the 46th minute to give the Hotspurs the lead after a wild first half.

Things got going in the first half at the 20th minute when Hotspurs scored against the run of play.  Tate Mohney, from just outside the right edge of the area, fired a one-bounce shot past goalkeeper Brian Wilkin into the lower right corner.

The Lancers then charged back for a pair of goals.

In the 29th minute, Antonio La Gamba tallied his first goal as a Lancer to give the hosts a 2-1 advantage. Fernandes sent a left-wing cross into the box that was headed toward the net by a teammate. The clearance went right to La Gamba, who connected from atop the area.

Pittsburgh responded near the end of the half when Lucas Godinho was credited with the equalizer in the 44th minute, although it was probable that the ball had crossed the end line seconds prior.

And then 1 from Lucas Godinho… pic.twitter.com/NUFeoUL8bN

The Hotspurs didn’t waste any time after the whistle blew for the start of the second half.

It was Hawkins who hit the game’s deciding goal, half-volleying home a corner kick for the 3-2 lead.

From that point forward, the Hotspurs tightened things up, limiting Rochester’s chances for the rest of the match. Rochester’s best opportunity came from Daniel Reger’s header in stoppage time, it was cleared off the line by a Pittsburgh defender.

The clubs will meet again in the regular season finale, on July 11, at Founders Field in Pittsburgh.

Here’s how the Hotspurs lined up: 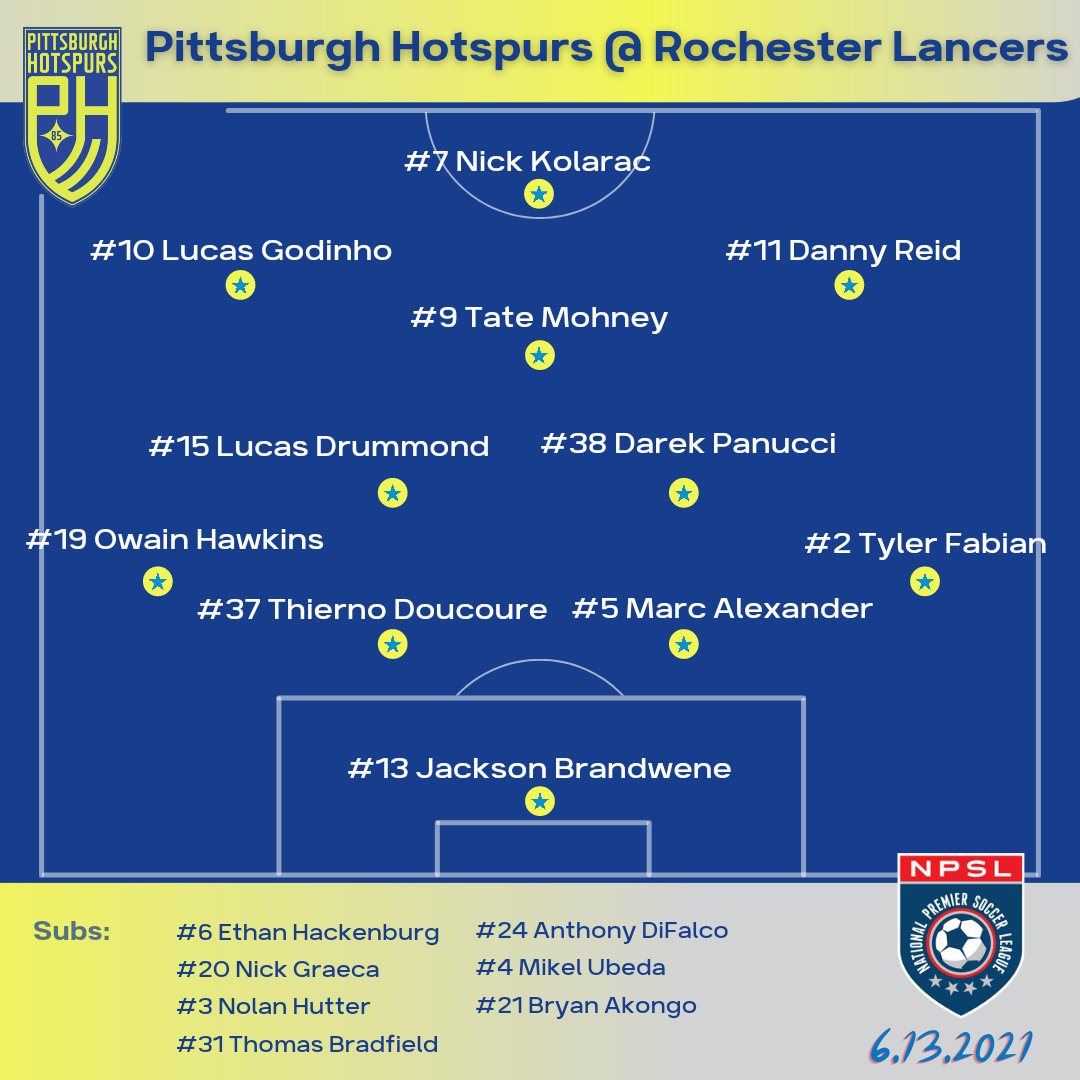 Next up for the Hotspurs, they’ll return to Western New York on Saturday, June 19, to take on FC Buffalo in Rust Belt Conference Division rematch. The Hotspurs defeated FC Buffalo 2-0 on Friday.