Cleveland SC storms back in second half to defeat Pittsburgh Hotspurs, 2-1 The Hotspurs took the lead with a goal from Nolan Hutter in the 6th minute, but Cleveland surged past Pittsburgh in the second half on goals from Vincent Bell and Thomas Beck.

“The boys gave it their all,” Hotspurs midfielder and captain Nicky Kolarac said after the match. “It was a tough one because it didn’t go our way. The last time we played them, they beat us 6-1, but tonight, we showed that we could play with them. Tonight, it was for the top of the table.  We came up short, but we have three games left to battle for a playoff spot.”

With the win, Cleveland takes command of first place in the Division, as they now own a 6-0-1 overall record, while the Hotspurs drop to 5-2-0, but still remain in solid position to earn its first NPSL playoff berth. Both clubs have three games remaining in the NPSL regular season.

“We knew from the get-go, that regardless of the previous result, that this would be a tough game for us,” Lewis Dunne, Cleveland SC Head Coach, said. “I knew from the start, even at the beginning of the season, that Pittsburgh would be the team in the division that would give us the most problems. I like the way they play. They have a good group of players, a good coaching staff.”

Looking to avenge its lone loss earlier in the season to the Division’s front-running squad and playing before a nice crowd that filled the bleachers at Founders Field, the Hotspurs came out on the front foot in the early moments of the match.

Pittsburgh drew a corner kick opportunity in the 5th minute after a long diagonal ball played to captain Nicky Kolarac, was cleared off the line by a Cleveland defender.

The Hotspurs opted to play a short corner kick, Tate Mohney delivered a short cross from the right end line that connected with Nolan Hutter for the 1-0 lead.

“It was delightful,” Hotspurs Head Coach Tom Campbell said. “It was a clever bit of play from Tate. Everyone came up, Drove it into the box. It was fantastic.”

Throughout the first 20 minutes of the match, the Hotspurs were effective in working the ball into the spaces into the width of the final third, creating five first half corner kick attempts.

They nearly doubled the lead when Ethan Hackeburg broke loose on the left side, then unleashed a shot that banged off the left post.

As the half progressed, Pittsburgh sat back more, absorbing more pressure while Cleveland was still trying to navigate on the grassy surface. The Hotspurs would find more opportunities on the counter, while Cleveland’s best efforts resulted in a few dangerous balls in from a trio of free kicks and four corners.

Kolarac found a chance at the top of the box, where he’s scored a few times already this season, but Cable was able to make routine save in the 25th minute.

“We had our opportunities to win 1v1 battles in the corners. Keeper made a couple nice saves. We were close a few times,” Campbell added.

In 42nd minute, the Hotspurs nearly capitalized after a corner attempt, when they kept possession alive.  Just inside the left edge of the box, it was Mohney who drove a very hard shot on frame, but saved by Cable.

In midfield and when defending on the edges of the final third, the Hotspurs got a bit reckless, as both Ethan Hackenberg and Kolarac were booked for late challenges.

Cleveland didn’t waste any time trying to turn the tables of the match after the start of the second half. A quick possession forward resulted in a shot attempt from top of box bing blocked by wall of Hotspurs defenders. While Pittsburgh tried to keep things tight, they would have their work cut out against an inspired and experienced side which took command of the match in the 2nd half.

“They put us on the back foot from the start,” Hotspurs goalkeeper Keaton Jennings pointed out.

Still, there were moments that Pittsburgh hit back again on the counter.  After a Cleveland foul in the 54th minute, Lucas Godinho’s free kick forced Cable into making another save.

Four minutes later, the Hotspurs threatened and once again Hackenburg hit the post after receiving a nifty back-heel pass from Mohney.

While Cleveland had the better of play and started to ramp up the pressure, the Hotspurs were left clinging to a precarious one-goal lead despite numerous opportunities go up 2-0.

As Pittsburgh tried to build-up possession out of its defensive third, Cleveland’s high press laid the hammer down, turning the table of the match.

“We knew we couldn’t waste any time trying for the equalizer,” Dunne said. “We didn’t want to keep giving them hope to hang on. We knew an early goal (in the second half) would be massive. For us, it was a change of attitude, a change of mentality

Vincent Bell was there to intercept a poor pass, then CFC’s leading scorer accelerated into the left side of box to split the Hotspurs’ back line, then with Jennings to beat, he went to his right, to get around the Pittsburgh keeper for the easy finish.

“That was massive for us,” Dunne added.

With the match deadlocked at 1-1, Cleveland continued to be the more dangerous side.

There were a few more shaky moments for the Hotspurs as they attempted to play the ball out of the back –and most of the action stayed for large stretches in the attacking third for the visitors.

Eventually, Cleveland would stretch out Pittsburgh’s defenders and midfield, finding room to create room for the game-winner.

In the 83rd minute, Cleveland’s Chris Cvecko worked his way on the right end line, then with plenty of room to operate, delivered a perfect cross into the center of the box. connecting with Thomas Beck, who drove a header into the left side to beat Jennings for the go-ahead goal.

“Eventually, they broke us,” remarked Jennings.

Despite a few more advances forward in the final seven minutes plus stoppage time, the Hotspurs struggled to generate the same quality chances they created earlier in the match

“We had a lot of really good chances in the first half, but we couldn’t put them away. We put them in, it could have been a different result,” Jennings added. 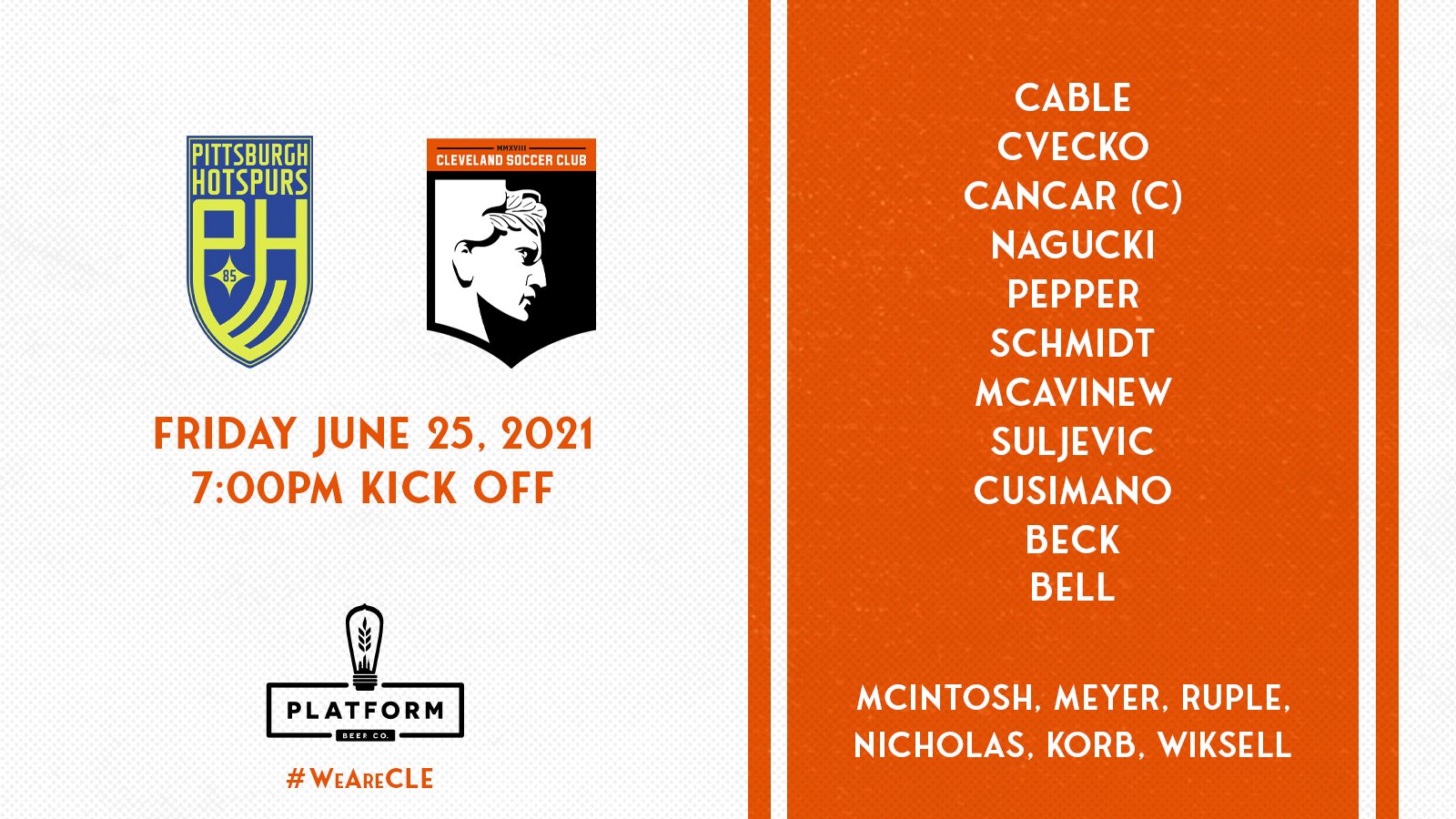 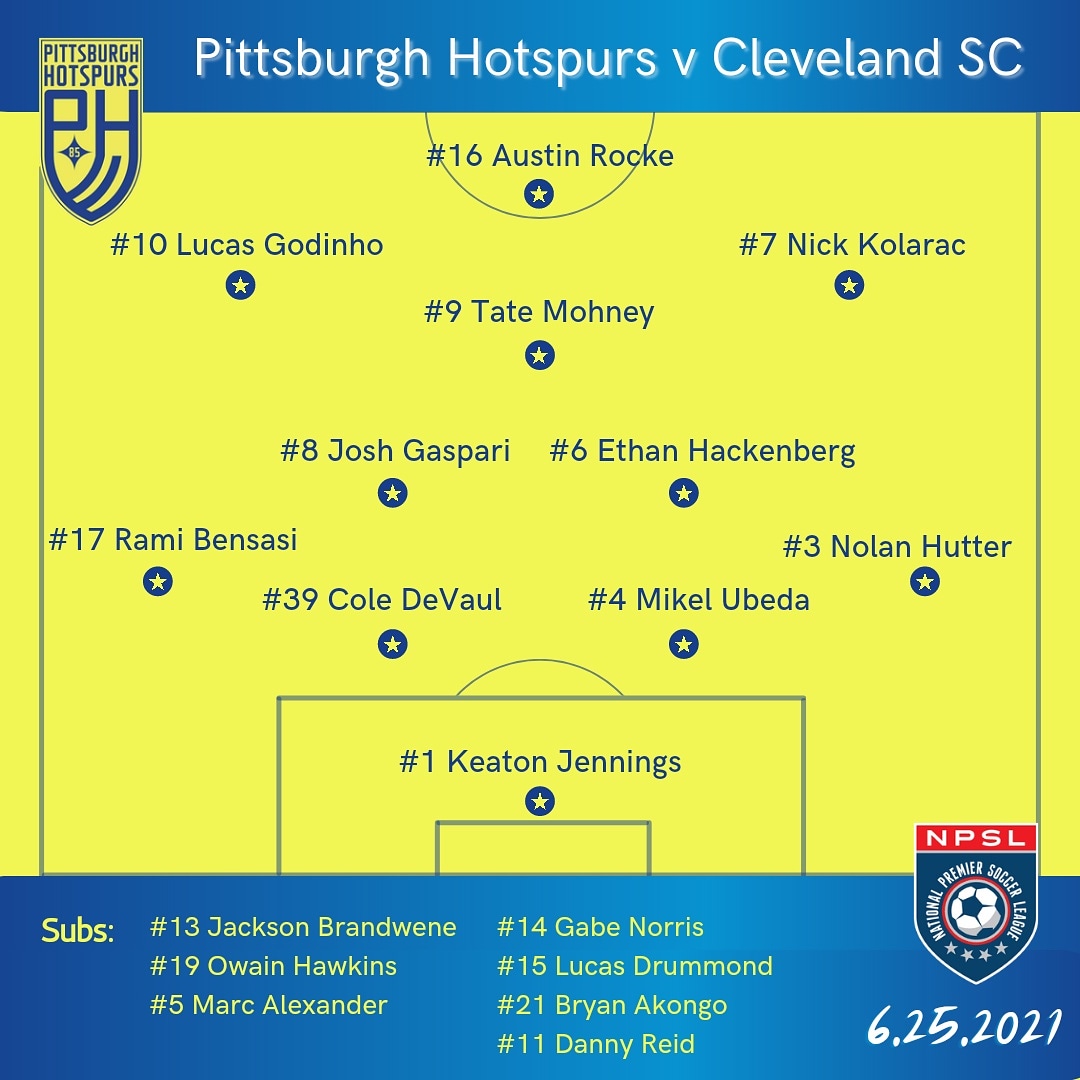