After a shaky start in the first 10 minutes, No. 3 Pitt turned things up a notch to bulldoze its way to a commanding 7-0 victory against crosstown Duquesne University in the season opener for both teams on Thursday night at a packed Ambrose Urbanic Field.

Duquesne had couple of chances to take the lead early in the match.  In the 4th minute, Pitt’s Mohammad Abaulnadi, starting his first game for the Panthers after transferring from Notre Dame, misplayed a ball, giving Duquesne’s Maxi Hopfer a clear breakaway. Abaulnadi showed impressive recovery speed to close down Hopfler, then block the shot attempt at the top of the box.

A few minutes later, Hopfer sent a cross to Nathan Dragisich in the box.  The former West Allegheny standout made a nice move to his left to set up a shot attempt, but Pitt’s Jasper Loeffelsend was there to block the shot.

Duquense’s goalkeeper Domenic Nascimben made seven saves in the match.

Pitt’s next match will be Monday night against West Virginia (7 p.m. in Morgantown), The Mountaineers beat Robert Morris earlier in the day, 2-0.

Duquesne will face Robert Morris on Sunday for its home opener at Rooney Field (2 p.m. kickoff).

Look for lineups to be posted here shortly before kickoff and updates throughout the match. PSN’s John Krysinsky and Zac Weiss will be at Ambrose Urbanic Field.

PENALTY
Not sure who it's one but there was a scramble in box and Pitt player goes down.
89' #CityGame

61′ — GOAL – PITT Sito Sena — comes right in and scores immediately. Collects an attempted clearance, and drives a bending shot into left corner. Pitt running away with this one now… 6-0 lead
54′ — GOAL — PITT – Valentin Noel
Fabulous build-up including a nice give-and-go, and it’s Veljko Petkovic who feeds Noel with the assist.
5-0 Pitt in comand vs Duquesne
48′ — GOAL — PITT – Arturo Ordonez
Corner kick in from Veljko Petkovic!

Assessing the first half, Duquesne definitely came out with more energy for the opening few minutes. Communication was consistent but once Pitt saw some mistakes it pounced. 3-0 Pitt in front after the first 45. @pghsoccernow

33′ — Bad pass back to middle for Pitt results in Duquesne opportunity for Zack Mowka — who’s shot attempt from edge of box is deflected out for corner. Dukes follow up with redirected header that Pitt’s Ordonez must head to clear away.

30′ — Pitt gets forward quickly after a Duquesne free kick attempt is cleared away. Noel gets fouled. On quick restart, Jacquesson hits one off the bar from 30 yards out!

23′ — GOAL — Veljko Petkovic
Noel’s first attempt bangs off bar, but Petkovic is there to put it into the net.
2-0 Pitt leads Duquesne

Great build-up — and final pass comes from Valentin Noel — and the Panthers go up 1-0 on the Dukes.

15′ — Loeffelsend draws a foul and yellow card goes to Dukes’

9′ — The Dukes get into final third. Nice ball in from Hopfer on right side for Nathan Dragisich who makes a move to his left but shot is blocked by Pitt’s All-American Jasper Loeffelsend.

4′ — Mohammad Abaulnadi misplays a ball — giving Duquesne’s Maxi Hopfer a clear breakaway. Abaulnadi shows impressive recovery speed to close down Hopfler to block a shot attempt at the top of the box. 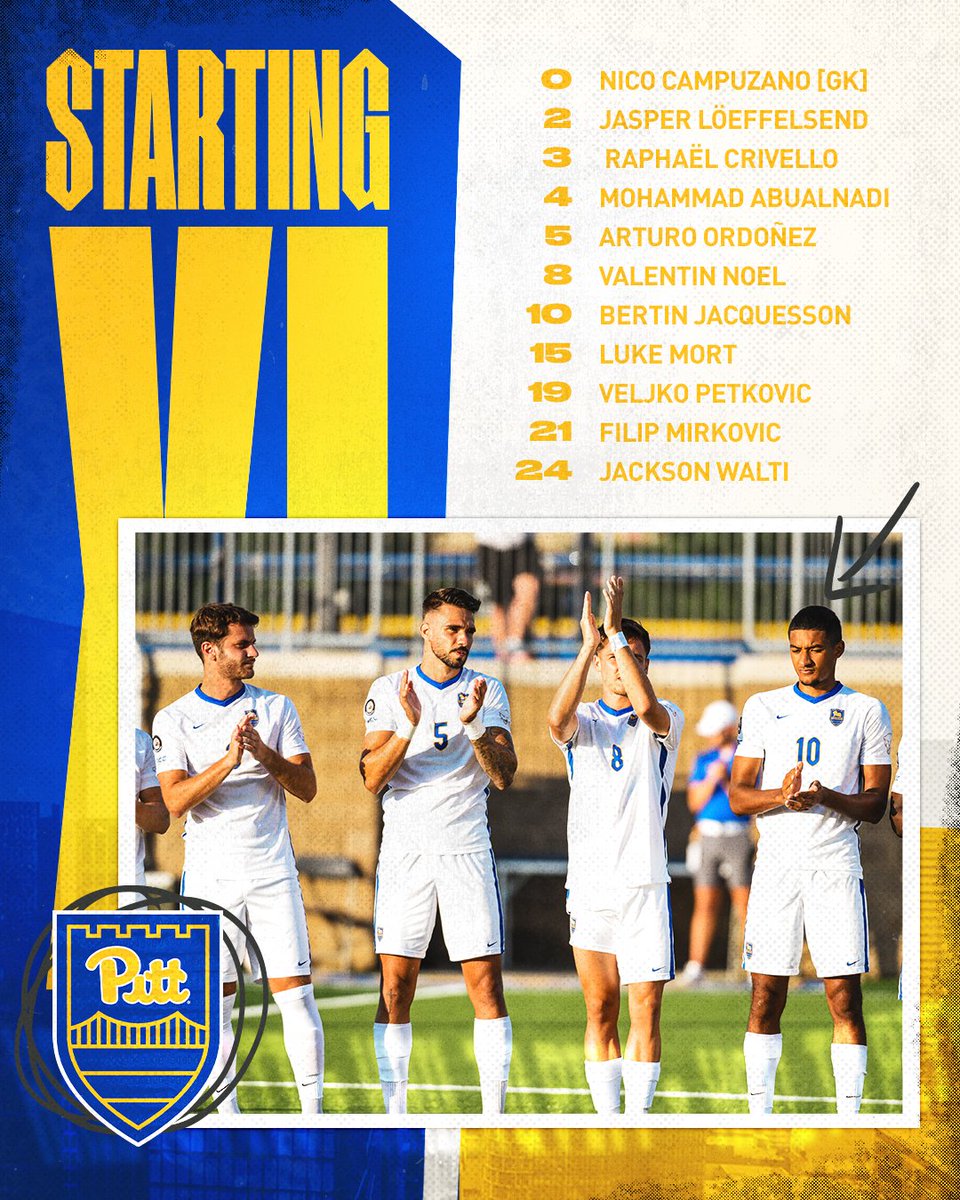 Three and a half months after playing in its first ever College Cup, the No. 3 Pitt men’s soccer team is set to begin the 2021 regular season at home against Duquesne Thursday evening.

–        The Panthers return 20 players, including 10 starters, from last year’s squad that finished a school record 16-4 overall and 9-1 in ACC play. Pitt won its first ever Coastal Division title and earned the No. 2 overall seed in the NCAA Tournament en-route to its first ever College Cup appearance.

–        Head Coach Jay Vidovich is 1-0-0 against Duquesne, with last year’s meeting his first against the University.

–        The Pitt men’s soccer program endured its best season in program history last year, highlighted by an ACC Coastal Division Championship and a trip to the College Cup for the first time ever.

–        The Panthers finished 16-4 overall and 9-1 in ACC play – both program records for wins in a single-season – and earned the No. 2 overall seed in the NCAA Tournament.

–        Pitt was ranked No. 1 in the country by the United Soccer Coaches Poll for the first time in program history Oct. 20, 2020. Men’s Soccer became the third Pitt athletics program in school history to be named No. 1 in its respective sports’ poll, joining football and men’s basketball.

–        Junior midfielder Valentin Noel had one of the best single-season performances in Pitt men’s soccer history a year ago.

–        The Niort, France, native scored eight goals and tallied two assists during the fall campaign and finished with six goals during the spring. He registered three multi-goal games in total last year.

–        His total goal and point totals each finished tied for fifth in a single-season at Pitt.

–        Noel was invited to the prestigious MAC Hermann Trophy presentation in St. Louis, Mo., as a finalist for the MAC Hermann award, given to men’s and women’s soccer’s national player of the year.

–        The Panthers were chosen by ACC coaches to finish first in the Coastal Division and first overall in the ACC Coaches’ Preseason Poll.

–        The Panthers received nine first-place votes in the Coastal Division, a division they won last year for the first time in program history.

–        Twenty players, including 10 starters, return for a Pitt team that finished with the fifth best scoring offense in the country.

–        A notable returner is Alexander Dexter, who begins his fifth and final campaign as a Panther. Dexter began his career as a freshman in 2017 and has since totaled 18 assists, ranking him second in school history.

–        Recent Pitt graduate Bryce Washington, who was a key piece to Pitt’s back line last season, signed a homegrown contract with Atlanta United this summer and is currently playing for Atlanta II.

–        Eight new players join the Panthers in 2021, including five freshmen, two juniors and a graduate student.

PITT RANKED NO. 3 IN PRE-SEASON POLL

–        The Panthers enter the 2021 season ranked No. 3 in the United Soccer Coaches Poll, the highest preseason rank in program history.

–        The preseason poll marks the 20th straight week the Panthers have been ranked.

THE SERIES VS. PITT

Duquesne is scheduled to face four teams either ranked (#3 Pitt & #14 Kentucky) or among those also receiving votes (Dayton & UMass) in the United Soccer Coaches Preseason Top 25.