In a pretty evenly matched battle between two teams fighting for home field playoff spot, the Pittsburgh Riverhounds SC came up short on the road, surrending a halftime lead as Birmingham Legion FC battled back with two second half goals to take the victory at Protective Stadium in Birmingham, AL on Wednesday evening.

With the win, Birmingham (16-8-6, 54 points) jumps two points ahead of the Hounds (15-8-7) in the Eastern Conference standings,
“I’m proud that after they scored, we regrouped and still tried to win it. We pushed hard at the end, and the guys worked hard. … But against a good team on their home pitch, they found a goal,” Hounds coach Bob Lilley said.

“The quality of our last two games have been a lot better than a few weeks ago. I see an upswing in our play, and we have three of our last four at home, so we have to go win those.”

After Birmingham goal was disallowed by a questionable off side call, Pittsburgh quickly responded immediately in the 38th minute, as Albert Dikwa scored his 10th goal of the season to give the visitors a 1-0 lead that carried into the half.

In the second half, Birmingham responded, as veteran midfielder Enzo Martinez redirected a deflected ball from Arturo Ordonez’s attempted clearance, with a one-time blast into the upper part of goal, blowing past Hounds keeper Jahmali Waite.

Birmingham took the lead in the 66th minute when Martinez delivered a perfect cut-back pass from the right side, sending the ball through traffic and to the foot of Sadik Balarabe, who took a touch, then with plenty of room to shoot, beat Waite for the go-ahead goal.

The lead would hold up, despite a late push from the Hounds that including numerous crosses and close calls.

Hounds defender Jelani Peters was issued a pair of yellow cards, forcing him to be sent off in stoppage time, derailing Pittsburgh’s hopes for finding an equalizer.

Felt like a deserved win for the #ThreeSparks when you take it all into account. They're up into fourth place ahead of #HOUNDTAHN with four games to go for each.

It’s the first win for Birmingham Legion ever against the Riverhounds. They responded with an impressive second half, led by Enzo Martinez’s goal and assist.

Otherwise a pretty even, back-and-forth affair as both teams has 12 shots (both had 4 on frame).

90′ — Hounds bringing plenty of pressure over past 10 minutes, but nothing to show for it. Three minutes of stoppage time added.

80′ — This has been a fun, back-and-forth affair. Lets see if the Hounds can get one back as they have reinforcements (SUBS: Kizza, Rovria, Argudo & Ybarra) in there for late push.

Another Birmingham goal as Enzo Martinez is having fun at the Hounds' disposal tonight. #BHMvPIT https://t.co/48t7eQ3eIE

56′ – First substitution of the night is made by the Legion. Bruno Lapa enters, as Prosper Kasim gives way.

54′ – Lunging effort by Cicerone to get on the end of a cross by Mertz, but it’s just out of his reach. Hounds settling things back down some after conceding.

A nemesis for the Hounds for many years is happy to redirect a deflected ball from Arturo Ordonez’s attempted clearance into the upper part of goal.

Pretty well played half. Hounds get the break on the disallowed goal, then quickly get one that counts from Dikwa for the lead at the half.

Albert Dikwa with his 10th of the season. Terrific strike as Hounds turn the tables. Bob Lilley wanted his players to take risks. Dikwa had a pair of defenders in his way but he finds room inside left side of the box to bury it.

Russell Cicerone gets credit with the assist for getting it to Dikwa.

Does Birmingham have a legit beef? Maybe!

This was called offside in the massive @bhmlegion v @RiverhoundsSC match. Moments later, Pittsburgh scored and took a 1-0 lead. Winner of this one will have control of the final @USLChampionship home playoff spot in the East. @PROreferees with a big miss here. pic.twitter.com/pRgMeXQyu2

37′ — Terrific BIrmingham build-up leading to one-timer into the back of the net from Argudelo, but it’s waved off, as Jelani Peters was holding the high line. Hounds fans breathing a sigh of relief there.

27′ – Agudelo with an excellent chance for the Legion, but he drags the shot wide after showing strength in the box. Hounds counter quickly, and now Dikwa wins a free kick along the wide edge of the penalty area.

23′ – Dixon gets in, and the ball gets poked to Dikwa. There’s a collision between Dikwa and Legion GK Van Oekel, a save, and Dixon is also down for a moment. Stoppage while everything gets situated.

20′ – Juan Agudelo (Birmingham Legion) header from a difficult angle on the left is high and wide to the left. Assisted by Prosper Kasim with a cross. 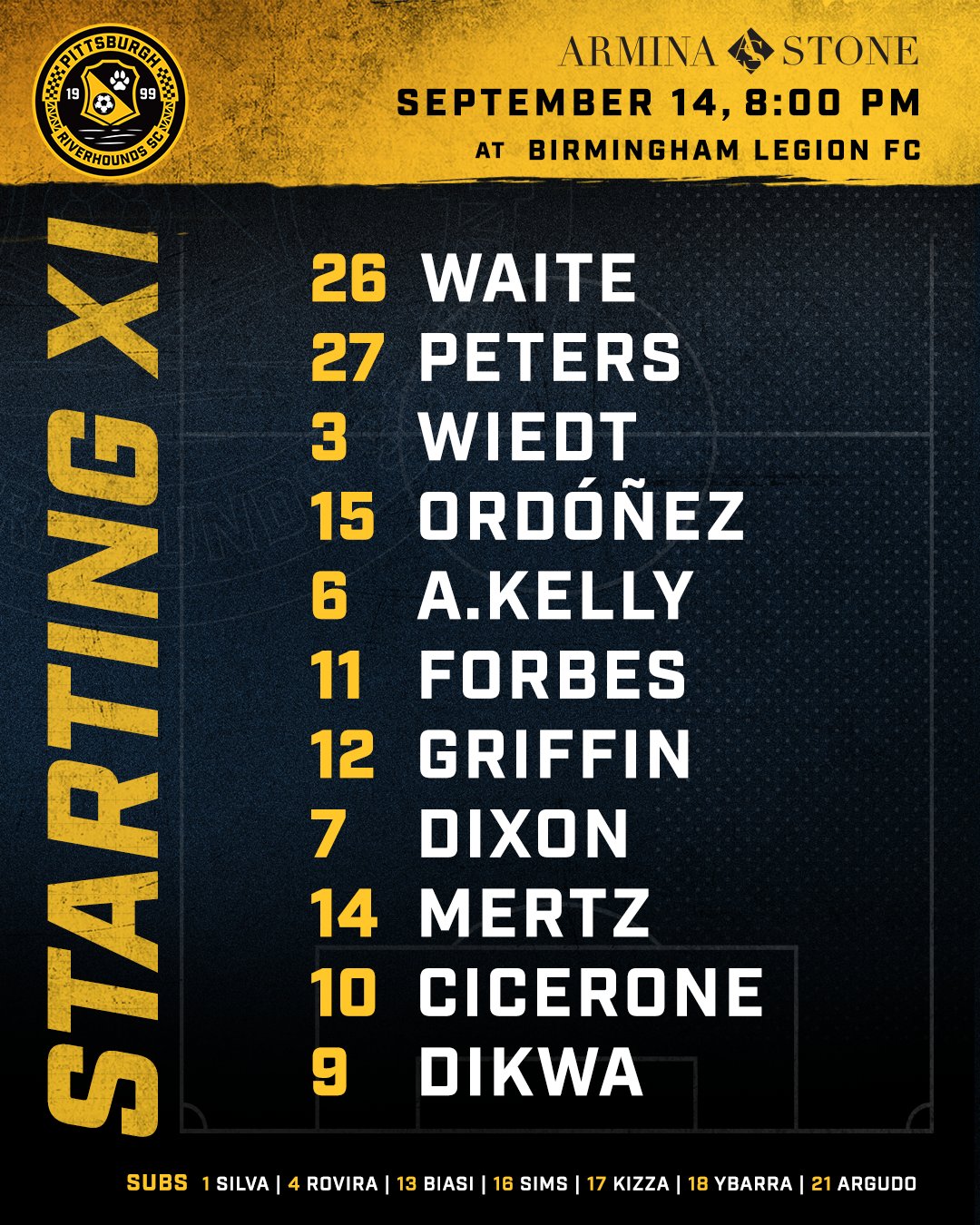 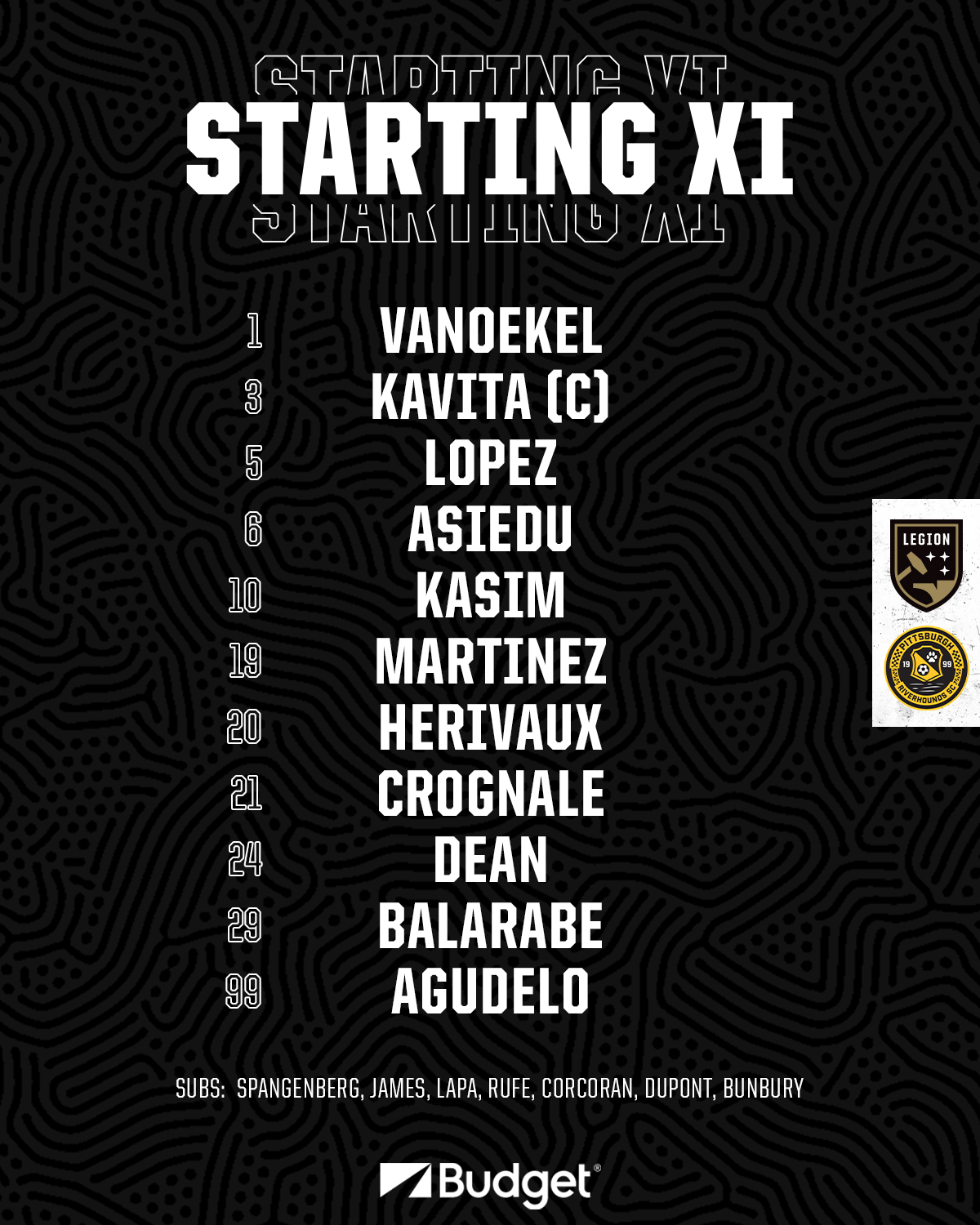 Either team can go a long way toward securing a home playoff game when the Hounds visit Birmingham Legion FC at 8 p.m. tonight at Protective Stadium in Birmingham, Ala.

The Hounds enter the game with a one point edge over the Legion for fourth place in the Eastern Conference, and while a draw would maintain the status quo — including giving the Hounds the head-to-head tiebreaker — it also would open the door for Miami and/or Detroit to close the gap and make a late push at the top four themselves. That means both teams will be aiming to claim all three points in just the second meeting for the teams in Alabama.

A year ago, the Hounds were set to play the Legion FC in Birmingham in the first round of the USL Cup Playoffs, but the club had too many COVID-19 positive cases among the ranks of the squad, thus had to forfeit the game, ending the season.

The last time the Hounds played in Birmingham, it was at the Legion’s old home, BBVA Field, and it was a historic result. The Hounds were victorious, 1-0, on Oct. 20, 2019, and the win — courtesy of Mark Forrest‘s 90th-minute goal — secured the top spot in the Eastern Conference on the final day of the regular season.

This year’s meeting first between the teams was also a 1-0 Hounds win, as Danny Griffin netted the only goal in Pittsburgh on May 7. Griffin, the Hounds’ ironman at 78 straight USL matches, should be at the center of a full-strength Hounds lineup with 10 days for players to recover before their next contest.

Birmingham and the Hounds both played last Saturday; the Hounds drew 0-0 with first-place Louisville, while Birmingham fell on the road to Indy, 4-3. The Legion also have more than a week to recover, so their top lineup should be available, led by veteran Enzo Martinez. The Uruguayan midfielder is having a renaissance at 31 years old, leading the team with 12 goals and six assists this season.

• The Hounds and Legion square off for the second time this season after the Hounds won the first meeting, 1-0, on May 7 in Pittsburgh. Danny Griffin scored that match’s only goal less than four minutes into the game.
• This is only the second-ever trip for the Hounds to Birmingham. Their previous road game in Alabama was a season-ending nailbiter on Oct. 20, 2019, when Mark Forrest scored in the 90th minute to give the Hounds a 1-0 win at then-BBVA Field. That victory clinched the top spot in the Eastern Conference for the Hounds.
• The Hounds have lost only once in their past 13 games, going 8-1-4 in that time, and have won their last four on the road.
• Since 2018, when Bob Lilley took over as head coach, the Hounds are 24-4-7 in league games played on weekdays (Mon-Fri), and they are 2-0-1 in weekday games in 2022.
• For the second year in a row, Russell Cicerone hit his stride in the summer months. In 19 appearances since May 14, Cicerone has 10 goals and four assists. He leads the Hounds with 12 goals on the season — good for eighth in the USL Championship — and he is just the third player in team history with consecutive double-digit goal seasons.
• Albert Dikwa has career highs of nine goals and four assists his season. When the 24-year-old forward from Cameroon gets his 10th, it will be just the fifth time in club history the team has had two 10-goal scorers in the same season — the most recent being in 2019 when Neco Brett and Steevan Dos Santos accomplished the feat.
• Danny Griffin has played all but 17 minutes since the beginning of the 2021 regular season, starting every league match during that time. He has not missed a league game since turning pro with the Hounds in 2020, appearing in 78 consecutive USL Championship contests.
• Hounds captain Kenardo Forbes is up to 40 assists as a member of the Hounds, pushing his USL Championship record
total to 54. With nine assists on the season, Forbes is second in the league and on the verge of his first double-digit assist season.
• Edward Kizza, who joined the Hounds in July on loan from the New England Revolution, netted the game-winning goal in the
team’s 2-1 win Sept. 4 at Loudoun. It was the first Hounds goal for the University of Pittsburgh product.
• In 156 matches under Bob Lilley in all competitions, the Hounds are 82-33-41 and have allowed just 145 goals, an average of 0.93 goals per game.