The WPIAL Boys Soccer playoffs continue on Monday evening, with a full schedule of first round matches in Class 2A.

The top two seeds in Class 2A are South Park and Quaker Valley. The Quakers will be aiming for their 11th WPIAL soccer title, as they are also the defending champions. South Park are looking to make a deep run coming off an undefeated regular season.  A year ago, South Park were also tabbed as the top seed, but lost to North Catholic in the quarterfinal round.

FOR THE FIRST TIME IN OVER 20 YEARS. YOUR TITANS ADVANCE TO THE QUARTERFINALS. @MVI_sports @TribLiveHSSN @pghsoccernow

Semifinal Round – Monday, October 31 (games schedule for either 6 or 8 p.m. starts at sites TBD) 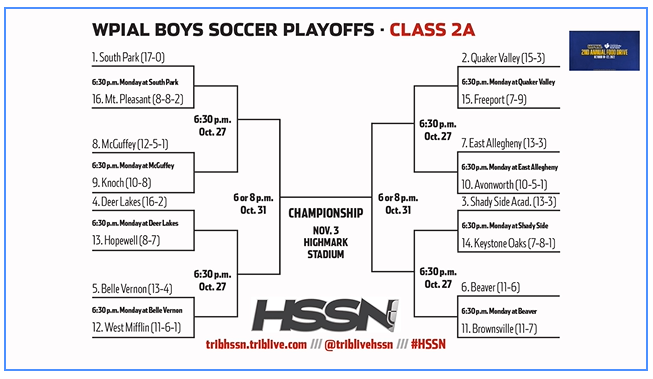