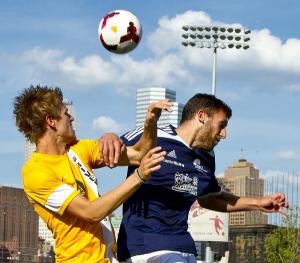 Like the Riverhounds, the City Islanders have had quite a few departures from their roster, but coach Bill Becher seems to be a guy who’s had success keeping them competitive each season since  their debut in 2004.
Last year, when they were mired in the middle of the pack of the USL for much of the season, they broke through with a nice playoff run and made it to the league championship — only to fall to upstart Sacramento FC, 2-0 in the final.
Among their returning players include goalkeeper Nick Noble, defenders Coady Andrews and Neil Shaffer. Jose Barrill and Yann Ekra return to their midfield — but they only bring back Garrett Pettis up top. Like the Riverhounds, they are also banking on a number of recent college and PDL players like Jason Plumhof

f, who played at Reading United AC (PDL) and among other interesting players to watch will be Jamaican national U-20 player Cardel Benbow.
Earlier this week, Riverhounds coach Mark Steffens spoke very highly of Becher — and Harrisburg earlier in the week — saying that they always put a tough team on the field.
Harrisburg has had the better of the series in recent years.
The City Islanders hold a 5-2-3 record in Keystone Derby meetings over the past four seasons. And, in six of the past seven seasons, they have finished higher than Pittsburgh in the standings.
The sides met three times last June. The Islanders produced a second-half comeback to seal a 3-1 win at Highmark Stadium in a game that was bookended by ties in Pittsburgh and Harrisburg respectively.
It was Harrisburg who spoiled the Riverhounds first ever game played in Highmark Stadium in April 2013, getting the game winner in injury time.  http://www.pittsburghsportsreport.com/PSR/node/5542
With the City Islanders holding a clear edge in the series, the Riverhounds know that to make their way upwards in the standings and in the USL’s Eastern Conference, getting the better of Harrisburg would be a great way to start.
WHAT TO EXPECT TONIGHT
Even last season, when the Riverhounds struggled early in the season when they completed the Keystone Derby, they seemed to play well in stretches against Harrisburg and every match was pretty hard fought as the teams know each other all to well.  A second half collapse in their second encounter at Highmark in early June was the difference in the series last year.
Tonight, although it is expected to be pretty cold, don’t see it being a big factor as both sides have been training for much of the past month in these conditions.
The Riverhounds experienced midfield may be key in keeping possession and hopefully getting the ball wide to create chances early — and also taking the pressure off their back line.
This is their first real test against USL level competition. The Hounds played exclusively against college teams in the preseason, and they are a bit banged up.  With expected starters in the back Drew Russell and Sterling Flunder, along with Matt Dallman all sitting out tonight — the Hounds will have a makeshift squad — especially in the back.
Anthony Arena and Fijero Okiohmah — along with the new man in the back — Ryan Thompson appear to make up a strong central defense and goalkeeper tandem for Pittsburgh.  Tonight will be their first time working together against a pro opponent.   How well they work — and communicate will be interesting to watch and likely a key to the game.
Finally, we’ll be watching closely how the Hounds go forward and what they can do to create chances, especially in their first action without Jose Angulo at the forward spot.   Expect to see more of Kevin Kerr and Rob Vincent, more natural midfielders, to push forward and be involved in creating goal scoring opportunities.

Amaia Peña signs with Athletic Club in her native Spain