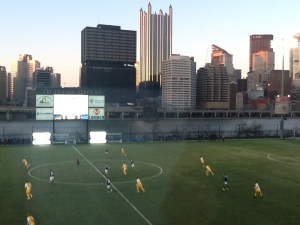 The Riverhounds came out rolling in the early stages of the first half — capitalizing on mistakes by Harrisburg’s back line.
Rob Vincent took advantage of a golden opportunity in the 4th minute, intercepting a poorly played ball between Harrisburg defenders at midfield.
Vincent had plenty of space — and he to made a run for the box right up through the center of the final third, and Harrisburg’s Nick Noble came out to defle
ct ball away. But Vincent was able to collect the ball as it bounced to the right of the goal, and found an opening past Noble who was still trying to get back to the goal.
Vincent wasn’t done.
In the 11th minute, from midfield, he sent a long ball over to the right side, just inside the box, where Kevin Kerr was trying to shake off Neil Shaffer. While Shaffer fell, Kerr was able to stay on his feet and send
Zach Pfeffer cut the lead in half in the 21st minute after receiving a through ball — as there was some miscommunication among the Riverhounds defenders — and Pfeffer easily beat Ryan Thompson.
Thompson came up with two big saves in the first half — one on a bending shot by Yann Ekra in the early stages, then in the 44th minute, came out of the goal to prevent Dzenan Catic from getting a shot off on a breakaway.
It appears that both teams have been playing direct — and trying to find cracks in the back lines.
The weather is only getting colder and expect both teams will likely be going to use most of their substitution allotment as the game wears on.
In the 4-3-2-1 both Kerr and Vincent are covering a lot of ground — and fitness might become an issue in the 2nd half for both teams so early in the season.
Nonetheless, while possession hasn’t been great on either side, and play has been sloppy at times, both teams are getting chances.