Taking a bit of a different approach to previewing tonight’s match between Pittsburgh Riverhounds SC and Nashville SC, so bear with me.

After all, it’s now officially three years to the day that a soccer game unlike any that’s been played at Highmark Stadium before or since.

On May 30, 2015, the Pittsburgh Riverhounds SC rallied for an improbable 6-5 come-from-behind win over its Keystone Derby rivals Harrisburg City Islanders.

It was such a remarkable game that when I finished my game recap — I led the story with the following sentence:

I’m calling it ‘The Miracle on the Mon’.

Here’s my game recap from that night: RELATED: MIRACLE ON THE MON –  Hounds Complete Comeback for the Ages

A few days later, I penned this long-form piece, capturing a lot of the details, tension and excitement from that memorable night. Anatomy of a ‘Miracle’ Win

A lot has changed since then. Harrisburg has now been re-branded as Penn FC — and the Hounds have only one player remaining from that squad – Kevin Kerr.

Those two teams have played twice this season —  producing zero goals in more than 180 minutes of play.

The possibility of a match racking up at total of 11 goals under the watch of coach Bob Lilley is something that in itself would probably be a miracle. Under Lilley the Hounds have transformed into one of the best defensive outfits in the league.

Tonight’s opponent, Nashville SC, have also posted a number of shutouts and are a strong defensive outfit too.

And yes, in the one time they’ve faced off this season, the match ended in a scoreless draw.

While many of the faces may have changed for the Hounds from that remarkable night three years ago, another key participant returns to Pittsburgh for the first time tonight since leaving in 2016.

It was Lebo Moloto who had a breakout performance that night — with three assists, including the one that led to the Miracle on the Mon game-winner delivered by Kerr that sent the team and the fans that witnessed the match into a wild celebration.

“I still get goosebumps thinking about that game,” Rob Vincent said recently on MonGoals ‘Of soccer and steel’ Podcast. “When Kevin scored that final goal, we all ran over to the corner and even though we had played for 96-97 minutes, I felt like I was going to explode. It was something that we’ll never forget.”

Moloto and Kerr along with Vincent were part of a team that was one of the highest scoring outfits in the league, and provided a fun and memorable season for Pittsburgh soccer fans. The team won the Keystone Derby Cup in its first year, earned a playoff spot and even hosted a MLS team at Highmark when making a run to the fourth round of the U.S. Open Cup.

It was Moloto’s first full season as a pro — and he became a play making attacking midfielder that helped create all kinds of room for Vincent and Kerr to manuever. Moloto finished that season with six goals and seven assists. Vincent had 21 league goals and Kerr had 10.

Make no mistake — this year’s team under Lilley’s guidance has not lost a game and is really pushing to become a championship contender. They’re unbeaten with more ties than wins (4-0-6)  — and even with some exciting matches being played (including the season opener at tonight’s opponent Nashville SC) — we’ve not witnessed any signature wins. 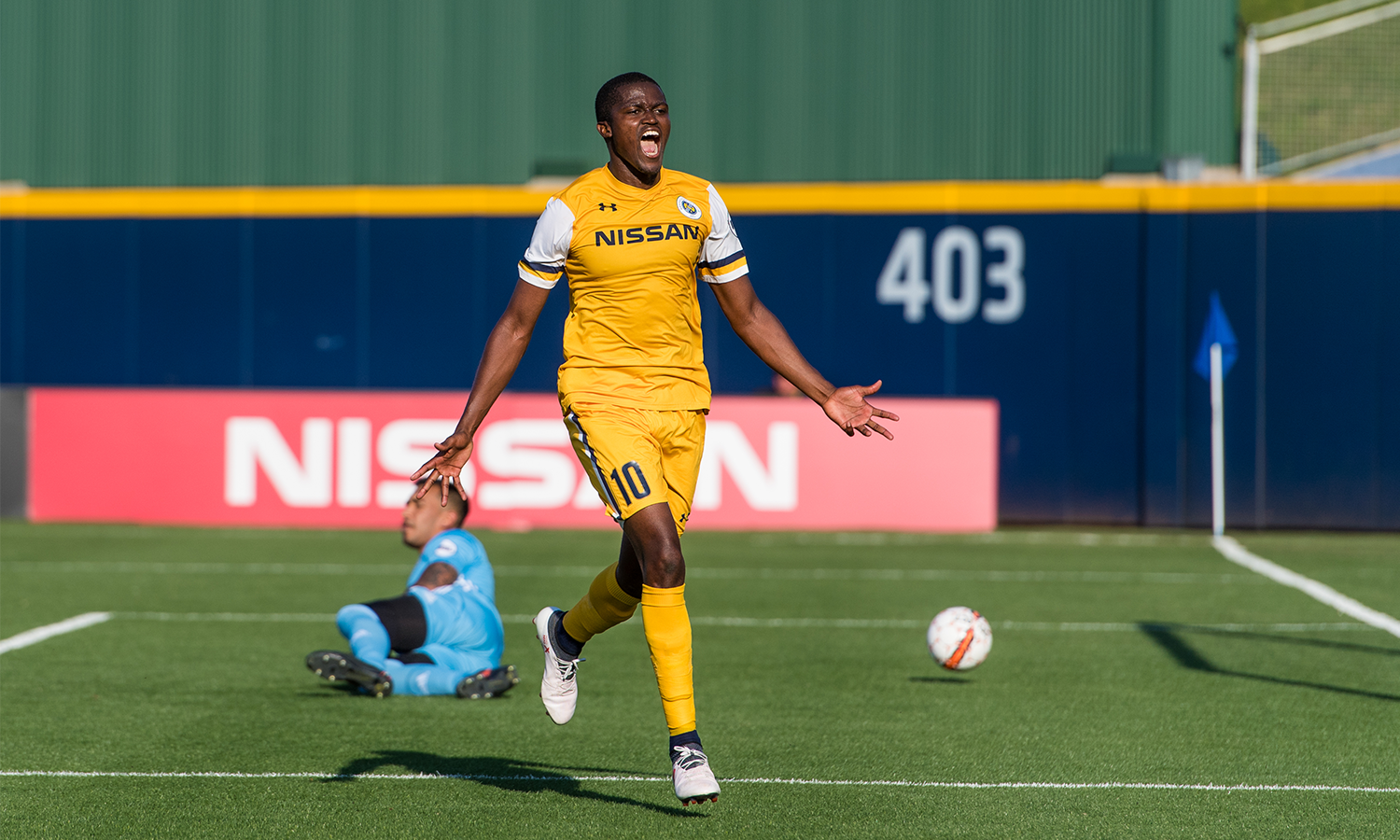 Who knows, maybe on the third anniversary of the Hounds most magical and improbable win in franchise history, they can produce a signature win against a quality opponent. RELATED: Despite Dazzling 2nd Half Chances, Hounds-Nashville battle to 0-0 draw

• The Hounds are also coming off playing its second scoreless draw of the season against Penn FC, as Head Coach Bob Lilley didn’t mince his words after that match. The veteran coach is hoping to avoid the same result vs Nashville.

“We’re so easy to play against right now. Everyone’s talking about our shutouts,” Lilley explained. “Being unbeaten is hogwash. We need to start winning games.”

• Early in the USL season, these are two of the better defensive clubs. The Hounds lead the league with seven clean sheets, while Nashville have posted five shutouts. Nashville’s Matt Pickens has netted all five for his club and is tied for the conference lead among keepers. Additionally, Pittsburgh has yet to concede a goal at home through six matches in league play.

• This match will also mark the return of Taylor Washington, who played last season with the Hounds, leading the back line with 29 appearances.

As indicated this may be another slugfest between two of USL’s best defensive teams.

Nashville, riding a four game unbeaten streak, just completed a tightly contested match against another one of the top teams in the Eastern Conference, Charleston Battery.

It was a deliberate and physical game Saturday.

Fittingly, Nashville SC center back Liam Doyle’s goal from 25 yards out off of a free kick earned Nashville a point in a 1-1 game at the Charleston Battery in MUSC Health Stadium.

Near the end of this week’s MonGoals podcast, Justin sat down with Speedway Soccer’s Jonathan Slape from the Speedway Soccer Podcast to preview what we should expect. Now they stood beside the treasure
On the mountain, dark and red
Turned the stone and looked beneath it
"Its GAMEDAY!" is all it said…#UNLEASH #OriginalCaste

“That’s just the expectation and the standard we put on the guys. We need to get three points every time we play at home,” Mark Pulisic, Hounds assistant coach, said.