Preview: What to expect of Borussia Dortmund and Benfica 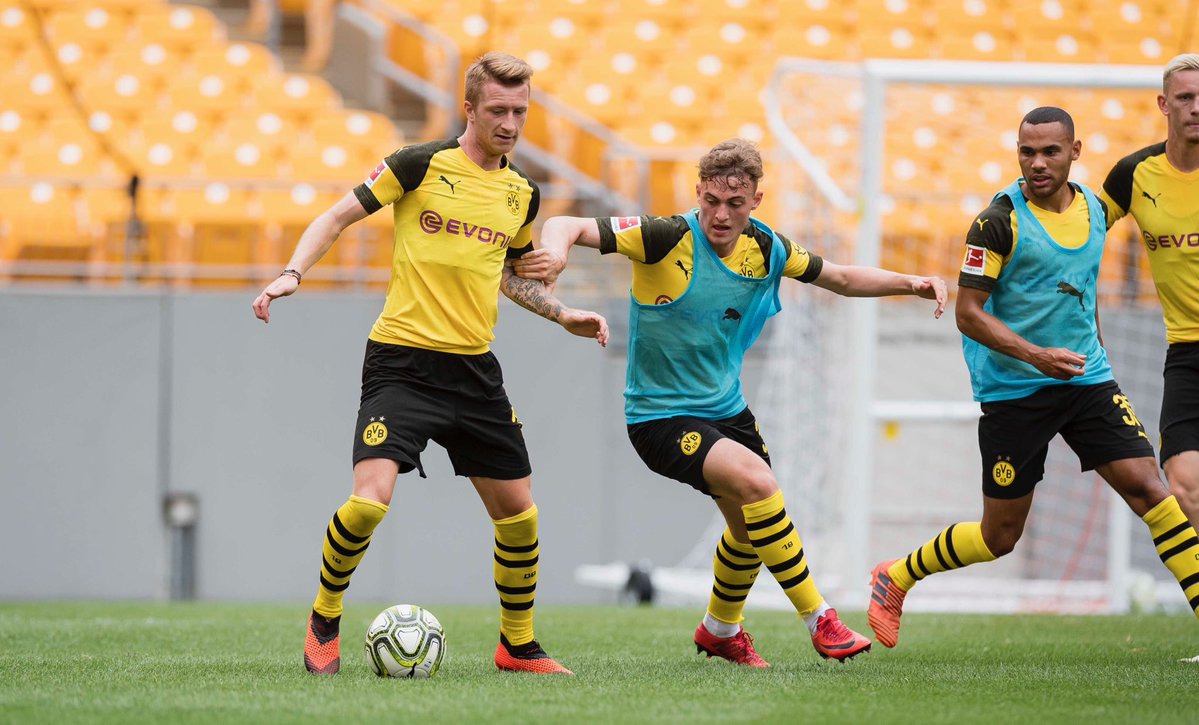 Any person that’s ever played Ms. Pac-man at an arcade knows the deal. After an initial level or two at a languid pace, you eventually come to a point in the game after five or so minutes where the pace and tempo increase markedly. You can’t keep up. Your reactions are strained to the breaking point. And Inky, Blinky, Pinky or Clyde trap you in a corner and you’re toast. All video games are the same: the pace gets quicker at the more challenging stages until all but the very best players have long-since given up.

This is what to expect when you watch Borussia Dortmund. BVB, as they are also known, have soccer players that move the ball around, dribble forward, or simply make decisions at a mindblowing speed, like an eleven-man squad of soccer supercomputers. The talent on the field is high enough that Dortmund can beat you a dozen different ways: on a speed dribble or with close-quarter dribbling, with a long ball over-the-top, from the wings, on a cross, with set-piece ferocity, and more. But the single most consistent attribute of the Borussia attack is the sheer audacity of how fast it comes at you. In this past 2017-2018 season, a midfield takeaway would be advanced upfield in two passes to striker Pierre-Emerick Aubameyang, and the opposing keeper would be picking it out of the back of the net before anybody knew what happened.

This is an elite football club. Every player has inch-perfect technical ability to move the ball or receive the ball exactly as they desire. And they use that precision in much the same way an automotive engineer in Stuttgart would assemble a $200,000 Porsche – for speed.

Being that this is an ICC pre-season match, though, you may not see Dortmund at their sharpest. Nor will you see all of their biggest stars for the full ninety minutes. So keep an eye out for their youngsters, as this is an opportunity for any players that are on the cusp between the senior team and the youth program to make their mark. That said, you came to see Dortmund not for it’s prospects but rather for its stars, and the obvious superstars to watch in this game will Marco Reus, Maximilian Phillipp, and America’s own Christian Pulisic.

Reus is an attacking maestro par excellence but spent the first half of the season last year on the shelf with a torn ACL. The 29-year-old returns to BVB with a desire to prove something after Germany’s failure at the World Cup and his own struggles to make an impact in the past few years. Phillip is a young and exciting center forward and the heir-apparent to the goal-scoring responsibilities left vacant by the aforementioned Aubameyang. He started Dortmund’s ICC match last week against Liverpool in Charlotte, North Carolina. Finally, there’s no need to say anything about Pennsylvania native Christian Pulisic. The roars alone when he is introduced tomorrow night at Heinz Field will tell you all you need to know. Expect the youngster to take charge in this match, as he will want to make his return home memorable for all in attendance.

SL Benfica is known in Portugal as one of the ‘big three’, joined in that troika by Porto and Sporting. Those three clubs have won almost* every Portuguese first division title in league history. Benfica is also known around the world as a well-regarded ‘selling club’ – they like to pick up talented young players, especially from South America, develop them and expose them to top-level European football, and sell them on for a big profit. A recent sampling of high-priced players that passed through their club on the way to somewhere else includes Angel Di Maria, David Luiz, Jan Oblak, Nemanja Matic, Axel Witsel, and Renato Sanches. The greatest player in club history is the legendary Eusebio, who scored an unbelievable 423 goals in his professional career, with 317 of those coming at Benfica. He won the European Cup, the forerunner to what we now call the UEFA Champions League trophy, with Benfica in 1963, and the Ballon D’Or, FIFA’s award to the world’s best soccer player, in 1965.

Expect pace on the wings with Benfica, often culminating in low crosses and ferocious shots from all angles. Spritely winger Eduardo Salvio has pace and precision, usually starting on the right wing in a 4-3-3 or 4-2-3-1. Creative midfielder Pizzi will control the tempo in the middle. But expect to see some of their younger brood get the bulk of minutes as manager Rui Vitoria tries to figure out the best options for his club heading into the new season. Their youngsters include midfielders Joao Felix and Gedson, midfielders Alfa Semedo and Zivkovic, and 20-year-old American Keaton Parks. Parks moved from Plano, Texas to Varzim in the Portuguese second division when he was just 17 years old. He caught the eye of Benfica scouts, earning a move to the larger club 2017. I imagine Benfica will want to give the American kid some minutes on his home soil, and Parks will want to show the crowd that Christian Pulisic isn’t the only exciting young American footballer around.

* Editors Note: an earlier version of this article stated that Benfica along with Porto and Sporting had won every title in Portuguese League history. That was in error. Reader Pacheco notes that ” Boavista 2000-01 and Belenenses 1945-46″ have also won titles.