Erie storms back in second half to spoil Hotspurs’ NPSL debut In front of a lively crowd, Curtis Strolley and the Erie Commodores spoiled the National Premier Soccer League (NPSL) debut of Pittsburgh Hotspurs, with a come-from-behind 2-1 victory Sox Harrison Stadium in Edinboro, PA on Saturday.

Strolley scored twice in the second half, as the Commodores outlasted the Hotspurs in what amounted to a pretty evenly played match.

The much anticipated Hotspurs inaugural match was played as part of Erie Premier Sports Annual soccer tournament at Edinboro University, with youth teams from clubs from all around attending.

When the Hotspurs’ bus arrived at the stadium, they were greeted by many of the youth players from its organization.

“The support was fantastic,” Tom Campbell, Hotspurs head coach said. “We had so many of our younger players there cheering us on. They were signing songs, chants, it was brilliant. A great experience for our players. Massive thank you to all those who came out.”

With fan support behind them, the Hotspurs had a strong first half.

Even dealing with a pacy striker and wingers from Erie, the Hotspurs back line stayed organized, and goalkeeper Patrick Hoffman (Misericordia University / St. Mary’s, PA) came up with a few saves, to keep the match level throughout the first half.

In the 42nd minute, Hotspurs capitalized on a prime chance in the final third.

Stouffle found the back of the net to score the first-ever goal for the Hotspurs, and give his team the lead as the game reached the half.

“We spoke about the importance of playing well in the first 10-15 minutes of the second half,” Campbell said. “And we did, as we kept possession, but started to play a bit longer than we’d like to have played.”

After trailing 1-0 at halftime, the Commodores, a bit more battle tested and with more overall fitness having already played one Open Cup and a league match, would find the equalizer.

Strolley broke through on the left side, to slide a shot that caught just inside of the right post to tie the match in the 62nd minute.

“We kept playing well, but started to get stretched. They were trying long diagonal balls throughout the night,” Campbell added. “Maybe we could have changed tactics, but the boys were putting in so much effort.”

Later in the half, one of those long diagonal balls found Strolley on the right side outside the box. Strolley stepped between two Hotspurs defenders, and ripped a shot into the upper corner for his second — and the game-deciding goal in the 82nd minute.

The Hotspurs didn’t quit though.

The final ten minutes of the match, including stoppage time, the Spurs mounted several chances but came up short.

“With the amount of young players we had, we did very well against a more experienced opponent. It was evident that fitness was an issue for us,” Campbell said. “After the 60th minute, our pace dropped a bit. It’s tough. Disappointing. But, overall, a massive start for us. We’re really looking forward to the rematch (6/21 in Erie).”

Though the match was played in Edinboro, the Hotspurs (0-1-0) were the home side, and now they’ll have two full weeks of training before playing its first game on its home field at Ellis School on Saturday, June 7, vs Cleveland SC.

The Commodores (2-0-0), the defending NPSL Midwest East champs, will wrap up its three-game road trip on Friday as they travel to George Finnie Stadium in Berea, Ohio, to take on Cleveland SC. 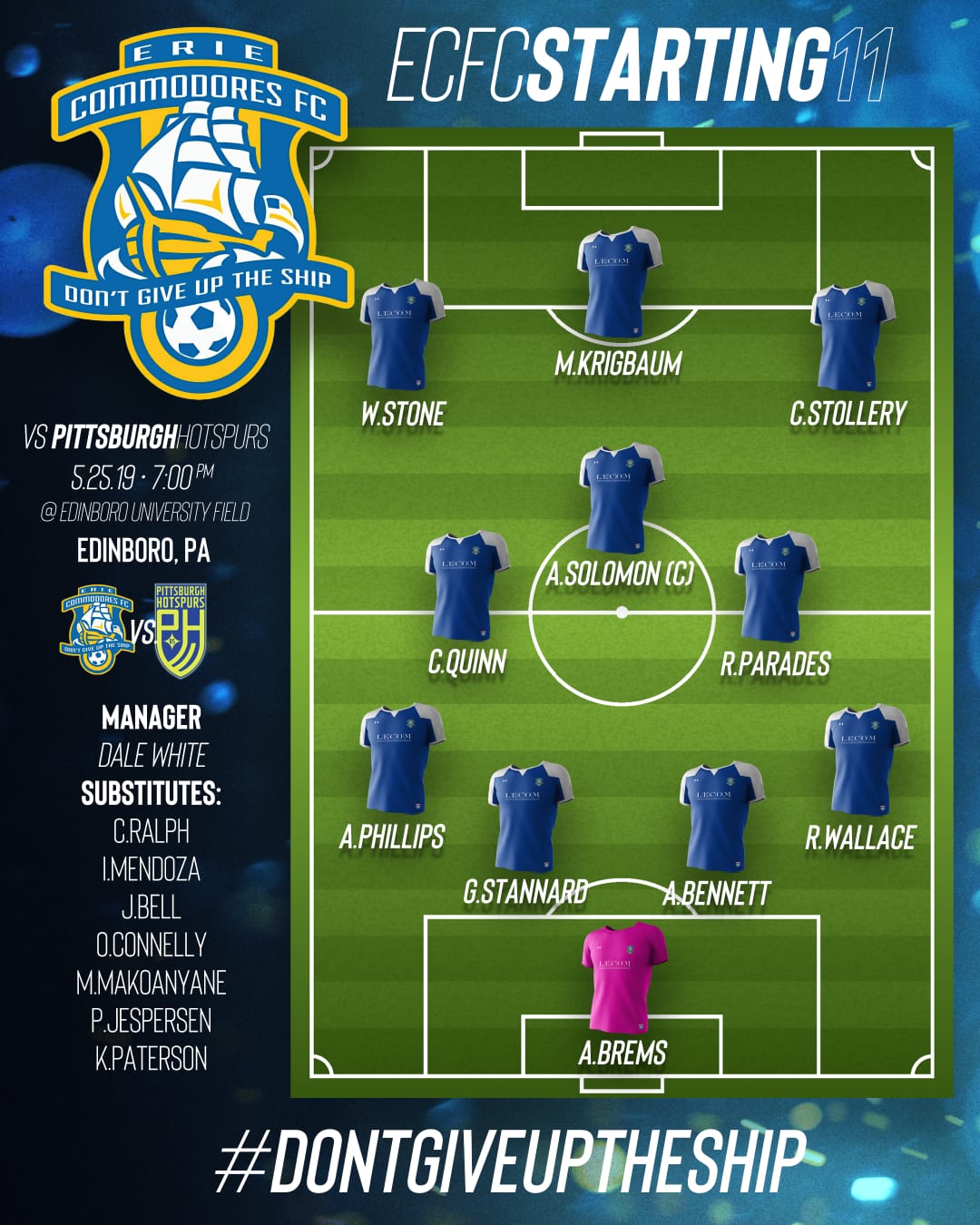 The locker room is buzzing! What a game!