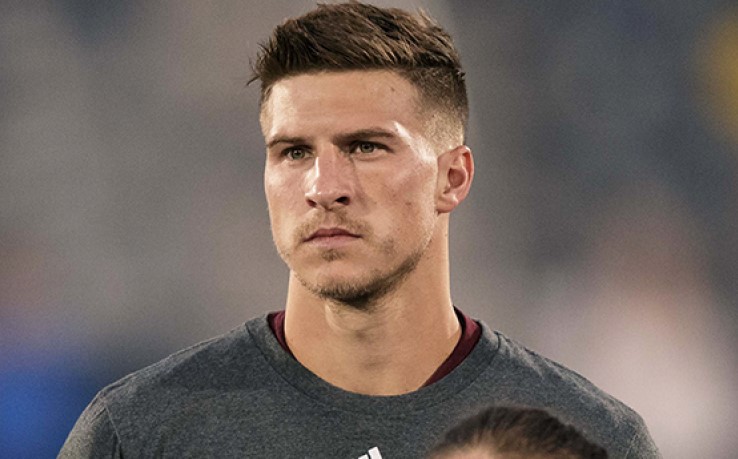 On Wednesday, the Pittsburgh Riverhounds announced another veteran signing:  Josh Gatt who’s been inked to a one-year contract with a club option for 2022, pending USL Championship and USSF approval.

For the second time this week that the Hounds have added a player with both experience in Major League Soccer and playing overseas in Europe.

Gatt, 29, is a speedy attacker who brings experience from the highest levels, having competed in both UEFA Champions League and Europa League matches and representing the United States in international play (two caps in 2012 & 2013) during his career.

“Josh is an exciting player that has good instincts in front of goal and is a consistent threat to get behind defenses,” Riverhounds head coach Bob Lilley said. “He can play multiple attacking positions and is also very capable of forcing mistakes by opposing defenders with his pressure. We are looking forward to having his experience and tenacity here in Pittsburgh for the 2021 USL season.”

A native of the Detroit suburb of Plymouth, Mich., Gatt elected to forego a college career at Indiana University and signed professionally with Austrian club Rheindorf Altach in 2010. Gatt made an immediate impact with six goals in 18 matches in all competitions in his first pro season, which helped him land a move to Molde, one of Norway’s top clubs.

As one of the first signings at Molde by manager Ole Gunnar Solskjær, now the head man at Manchester United, Gatt featured heavily in his first two seasons with the club. He scored five goals in 27 appearances his first season, as Molde won the Tippeligaen in 2011 for its first domestic league title, and Gatt matched that output — five goals in 27 appearances — the next season.

A severe knee injury in 2013 that required three surgeries limited Gatt to one appearance in 2014-15, but he worked his way back into first-team action with a goal in six matches in 2016. He then left Molde to sign in MLS with Minnesota United, but he was traded before the Colorado Rapids season, where he scored twice in 20 appearances during the 2017 MLS season.

Despite various challenges, including his knee injuries and his wife’s health issues that almost caused him to end his career, Gatt spent 2018-19 back in Austria with Rheindorf Altach, and most recently, he spent four months under contract with Dundalk in the League of Ireland Premier Division, making two appearances.

The Hounds currently have 12 players announced as being under contract for the 2021 USL Championship season, which is anticipated to begin in late April or early May.

When asked earlier in the week about the type of players he’s looking for to add to the the 2021 Riverhounds roster, Bob Lilley quipped, “The best players available!”

Gatt has significant pedigree as a pro player, but it will be interesting to see how he will fit and complement the other forwards and attacking players like Albert Dikwa, Russell Cicerone, Anthony Velarde and Alex Dixon.  It’s clear that Lilley is seeking players who can fit into his high pressing system with constant and intelligent movement — and more explosiveness. Gatt appears to be a player who fits that bill.

The only concern for Riverhounds fans would be Gatt’s health and time away from playing regularly, as he was with Irish club Dudalk FC in 2020 where his debut for the club came in the FA. He made Cup against Waterford F.C. on August 11.  In all, he only made two appearances with Dunalk in the League of Ireland’s Premier Division.

In the ESPN article from 2019, when talking about overcoming his injuries, Gatt feels like he has a lot of soccer left in his tank.

“I feel I have maybe eight or nine years left [as a pro] because of the fact I did suffer a lot of injuries, but I didn’t play a lot of soccer in that time, so I didn’t suffer a lot of wear and tear of [so many games] season after season,” Gatt said.

Much like the signing of Alex DeJohn, the Hounds are banking on a motivated Gatt (who is also the same age as DeJohn) having the opportunity to cement his place as a regular, impact player on a club with championship aspirations after spending the past few years mostly as a reserve.

Really excited to announce the next chapter in my career! I am very excited to be heading to the Riverhounds! Can’t wait to bring home a trophy in black and gold! 👊👊 https://t.co/grB6CPqHIs

Pittsburgh Soccer Now‘s Mark Goodman will add more of his feedback on Gatt, as he covered him when he was with the Colorado Rapids.