A few years back both Matt Bailey and Bryce Washington were very good Division I soccer players and student-athletes who made their mark with their respective schools and soccer programs as underclassmen at the University of Maryland, Baltimore County and Rutgers University.

Washington, who hails from Atlanta, Georgia, was a regular starter and standout for Rutgers along their back line in 2017 and 2018, making 32 starts, leading the team in minutes played and earning All-Big Ten Freshman team honors.  Bailey opted to stay close to his native Kent Island, Maryland home by starting his collegiate career with UMBC, where he made 34 appearances and 19 starts, notching five goals and three assists.

Heading into their final two years of college, each were looking for something more.

“Pitt was a program on the rise,” Washington said after training this week.  “Knowing (Head Coach) Jay (Vidovich)’s background.  He’s a great coach who’s had incredible success at Wake Forest.  I could see he was building something special at Pitt.”

“For me, I wanted to get to the highest level in college soccer,” Bailey said. “Coming to Pitt, I wanted to be part of something bigger than myself.  Being a part of building a winning culture.”

Along with Sito Sena and Alexander Dexter plus two graduate student additions, left back Jasper Loeffelsend and goalkeeper Nico Campuzano, who each bolstered the talent level of the current roster, Washington and Bailey are part of a strong group that carry the senior leadership mantle for a men’s college soccer program littered with many underclassmen playing key roles.

As experienced college players by the time they arrived at Pitt, Washington and Bailey were instrumental as leaders who bought into all aspects of building a winning culture and have helped set the tone for Vidovich’s program which emphasizes professionalism and accountability.  In this time, Pitt’s program status has elevated to unprecedented success, culminating with a run at the top spot in the United Soccer Coaches poll for five weeks during the Fall season and an appearance in the ACC Championship game.

A redshirt senior, Washington’s has become a key piece in the middle of Pitt’s back line the past two years.

Much like his center back partner Arturo Ordonez, Washington is an athletic, physical and steady presence in the back who can defend well in one-v-one situations and is a threat in the box on set pieces.  In his first season at Pitt, in 2019, he played in 18 games, starting 13 — as he ascended into the starting role by the end of the season.

In Pitt’s NCAA tournament appearance against Lehigh in November 2019, Washington scored the Panthers second goal in the 2-0 win.

Bailey appeared in 17 matches with the Panthers in 2019, starting nine times and has been an important part of Vidovich’s midfield rotation.  In the 2020 fall campaign, he made two starts and a bunch of off-the-bench appearances  The 5-foot-7 Bailey can plug in as a pacey winger or an attacking mid, and is a danger on the ball.

When everything came to a halt after a ground-breaking season and uncertainty reigned shortly after the COVID-19 pandemic began, Washington and Bailey did what they had to do to continue to prepare for 2020.

“When the pandemic hit, we didn’t know what was going to happen. I had to learn how to improve my game on my own. Look at my weaknesses and see how I could improve, once the season would come around,” Bailey said. “Even though we couldn’t be together, we stayed connected and continued to grow as a team. It was fun challenge in that regard.”

Washington, a former Atlanta United Academy player, worked out with his brother, who developed a professional soccer training program in Georgia, while Bailey was also finding time to get in his technical and fitness work on whatever field he could get on in Maryland.

“The warehouse my brother used for training, was mostly shut down, so I was able to use that space,” Washington said. “The team, we stayed connected.  A lot of zoom calls.  It was important that we did this and the coaching staff stayed in close contact.”

As the team stayed apart from places as far and wide as Pittsburgh to Europe, South America and Japan, social unrest grew following the death of George Lloyd and reaction mounted throughout the country and around the world.

“The education aspect was first. Bryce wanted to make sure that everyone’s voice was being heard,” Bailey pointed out that his fellow senior teammate took the initiative in facilitating open dialogue among the team. “Not only were the coaching staff helpful, but the university let student voices be heard. There was also a University-wide conference addressing the issues. It was great thing. Not just the team taking part, but the university too.”

“A lot of guys were hit hard by what was happening,” Washington, a political science major, said. “I was really happy with how we handled things. We addressed it right away.  We had open dialogue on Zoom calls. Shared how we felt about it.” 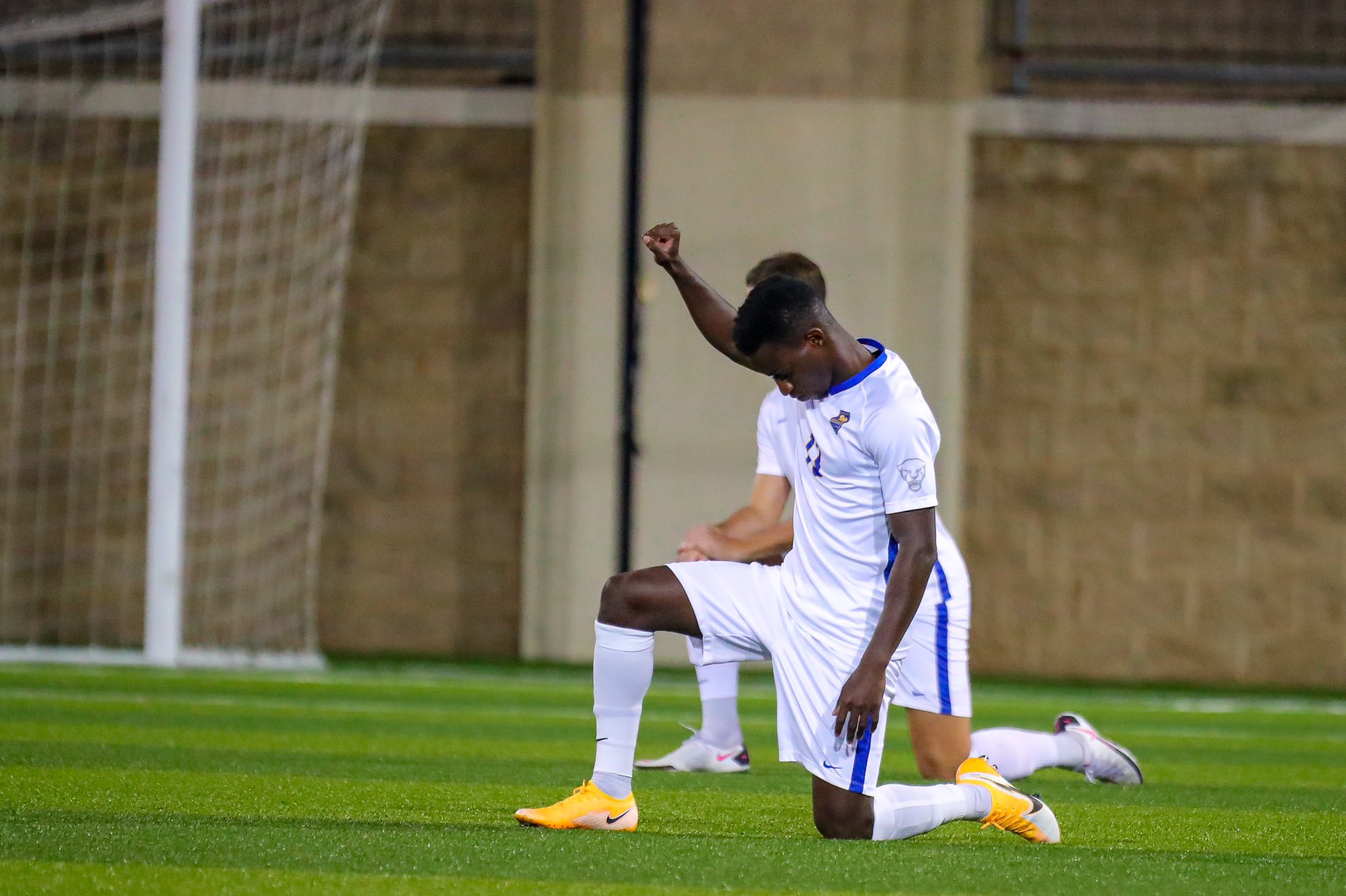 Since that time, Washington and his black teammates have been involved in more initiatives to help boost awareness and reflect on the importance of issues facing minorities.

"Black History Month is a time of reflection."

The team stayed physically apart until midway through the summer when the ACC decided to move forward with Fall sports schedules.

They finally came together as a team in early August.

“The one constant thing, that we were reminded of, was how lucky we were to have a fall season and be in the position we were in,” Bailey said. “No one else was getting this training. Maybe one other conference. So, for us, we had to take advantage of this.”

“The ACC is probably the best conference. When we found out we were going to play. For us, we found it opportunity that not only do we belong at the top of the ACC, but also looked at it as an opportunity to put our stamp on the game,” Washington said. “That translated into being highly ranked.”

Sure enough, Pitt raced out to an undefeated regular season in the fall, earning a program first number one ranking after beating Virginia on the road in overtime in early October.

Pitt remained the top ranked team in the nation through the remainder of the regular season, which shut down abruptly with more pandemic related adversity, as they had to quarantine for two weeks due to COVID-19 positive cases within the program.

Still, they were in the clear in enough time for the ACC tournament, which they entered as the top seed of the eight teams which qualified, another program first.  After wins against Duke and Notre Dame, the undefeated Panthers ran into Clemson in its first-ever appearance in the tournament final, dropping a disappointing 2-0 result against Clemson.

“Getting to the championship was an incredible experience. It was a culmination of a lot of hard work that began going back to March when the pandemic first hit,” Washington said. “It was a testament to where we’ve come as a program, what we knew we could accomplish if we put the work in, but it was also our first loss all season. Definitely difficult.”

Bailey and Washington acknowledge that the entire team is bonded by the sentiment to learn from and build upon Pitt’s only loss in the fall.

“We’re as confident as we’ve ever been. We learned a lot in that loss against Clemson. We spent a lot of time going over these situations when our back will be against the wall. The coaching staff has been testing us. By working on these things in our training, we’ll be stronger in the future.”

Washington added that after falling behind in the first half of the ACC Championship, the Panthers were in a rare position and were out of sorts.

“It was the first time we faced adversity as a group in the fall, when we were scored on first,” Washington explained. “The biggest thing wasn’t so much technical, it was more of a mindset. The past few months, we’ve spent a lot of time on the culture of the team. Our reactions. Our mindset.  How are we going to bounce back. That’s what Jay’s been preaching the past couple of months. The mentality piece of it.”

Washington, Bailey and their teammates returned to campus on January 7, and shortly after that they were putting in the work, training and gearing up for a successful spring campaign which they’re hoping will run through May and a berth in the College Cup, which will be played on familiar turf, in Cary, North Carolina, where Pitt played in the ACC Championship in November.

The Panthers open up the spring campaign against Akron on Saturday (3 p.m. kickoff at Ambrose Urbanic Field).

“Now that that we have the opportunity this spring to keep the momentum going,” Washington said. “We know what we’re up against, as we played most of the teams in the fall. We know where we are. We’re confident. We like where we are.”

“We’ve learned a lot from the fall, and we’re really looking forward to the upcoming season.”