After a slow start, the second-seeded Pitt Panthers rolled to a convincing 6-1 victory against Monmouth in the NCAA Men’s Soccer Tournament’s second round on Sunday evening at Bryan Park in Greensboro, N.C.

It’s the first time in men’s soccer program history Pitt has advanced to the Sweet 16, where they’ll now face Central Florida, who defeated James Madison, 2-1.  That match will be played on Thursday, May 6, at 3 p.m. in Greensboro.

The Panthers took command of the match midway through the first half, when Valentin Noel converted his first shot opportunity after receiving a perfectly placed ball over the top from Raphael Crivello in the 25th minute.

From that point forward, the match was not in doubt, although, Monmouth did start the match on the front foot, creating a few dangerous crosses, applying some pressure that resulted in three shot attempts, with two on frame in the first half.

Pitt doubled its lead when they created a corner kick opportunity in the 39th minute.

Veljko Petovic’s ball into the box connected with senior defender Bryce Washington, who found room just inside the far post to give the Panthers a 2-0 lead they would take into the half.

The Panthers continued its dominance early in the second half, when they converted after another corner kick opportunity in the 51st minute.  This time, after Petkovic’s ball into the box took a bounce, Alexander Dexter was the first to the ball to barely knock it forward, just inside the near side post to give Pitt a 3-0 lead.

Six minutes later, after a nice build-up that included new sub Matt Bailey and Petkovic playing a 1-2, then Bailey played the ball wide to Bertin Jacquesson — who sent a dangerous cross which forces harried attempted clearance by Monmouth’s George Akampeke, but the effort went awry, resulting in an own goal.

Pitt added another tally in the 71st minute when ACC’s Defender of the year Jasper Loeffelsend  made a run into the box, then laid off a nice short pass to Rodrigo Alameida, who converted his point blank opportunity from six yards.

Monmouth got on the scoreboard when Sito Sena was called for a foul in the box, resulting in Julian Gomez converting the penalty kick — driving a shot past diving Nico Campuzano.

Pitt capped its dominant performance after Sena was fouled, giving way to Rodrigo to convert the penalty kick from the spot in the 88th minute.

The Panthers outshot the Hawks (16-7, 9-4 on target), and from the 20th minute on, owned possession advantage.

Sito Sena was fouled in the box, then Rodrigo Alameida converts the PK!

Bryce Washington knocked to ground after getting a boot to the face when going up for header. As Gomez came up way too high in his dangerous attempt to make play on ball.
86′
Pitt leads Monmouth 5-1 (now playing up a man)

77′ — PENALTY — foul on Sito Sena give Monmouth a chance to get on the scoresheet.

You LOVE to see it!

Rodrigo joins in on the scoring to make it 5⃣ for the Panthers!

Rodrigo Almeida
Assist comes from Jasper Loffelsend, who worked his way up the right side, into the box, then laid off a nice short pass to Almeida.

it’s an own goal
set up from nice build-up that included Bailey and Petkovic playing a 1-2, then goes wide to Jacquesson — who’s dangerous cross forces an attempted clearance by Monmouth’s George Akampeke, but it goes in net.
57′ 4-0 Pitt

The Panthers make it 3!

Alexander Dexter in the goal box gets enough on it to put it through after loose ball from corner. 51′

50′ — Pitt already with a dangerous free kick and a corner!

38′ — Monmouth with dangerous cross in from left side.  Loeffelsend goes down too.  Corner kick for Monmouth

32′ — Noel fouled outside box.  Panthers’ with free kick from 30 yards.   Pretty interesting free kick designed play. While bunch of Panthers rush toward goal, Petkovic plays ball to Bryce Washington who steps back, then one-time chips it over to Noel, who was unmarked on far post side, but his shot from 15 yards goes over the bar.

It was a vertical ball played over the top from Raphael Crivello,
Panthers now lead Monmouth 1-0
Pitt is 13-0 when they’ve scored 1st.

24′ – When Monmouth brings the high press, they’ve rattled Pitt’s back line a few times into making some mistakes. Panthers might be playing a bit too deliberate in trying to play it out.

22′ — After sitting back for many stretches of the first 10-15 minutes, Pitt is now seizing possession for longer stretches, but they can’t get anything going in final third.

19′ —  Mirkovic attempts a shot from distance as Pitt has started to take more control of possession in the match.

16′ — Just as he was in stretches of the last match vs Clemson, Bertin Jacquesson has been the most creative attacking option for Pitt, creating a few crosses and a shot on target after some nice individual work on edge of box.

14′ — Consecutive corners for Monmouth results in Nico Campuzano having to punch the ball away on well placed balls to near, then far post areas.

12′ — Pitt’s Bertin Jacquessen with some nice individual skill work to get into box and create a nice shot on frame.

5′ — Monmouth not backing down. Bringing plenty of high pressure and have been into the box a couple times already. 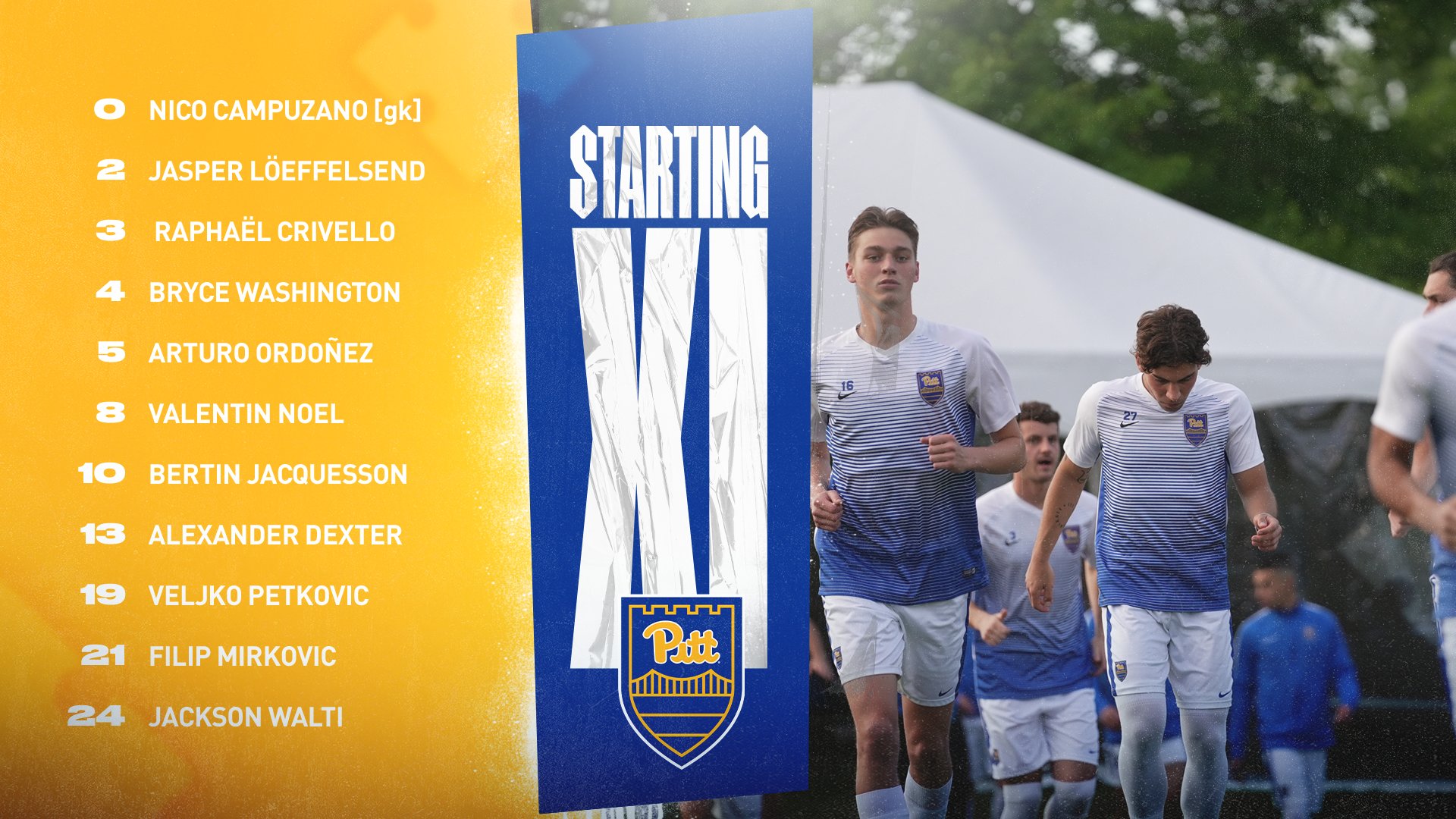 The Panthers earned the number two overall seed in the NCAA Tournament after finishing the regular season 13-3 overall and 9-1 in ACC play. Pitt earned a trip to the ACC Championship Final in November and were named Coastal Division champions following the spring campaign.

Monmouth enters the contest 6-2-1 overall and winners of the MAAC Tournament, earning the automatic bid from the conference. The Hawks defeated Bowling Green, 2-1, Thursday evening to advance to the second round.

–        The Panthers earned its highest spot in program history in the NCAA Tournament, receiving the No. 2 overall seed.

–        The Panthers enter with a record of 1-3 in the NCAA Tournament. Pitt’s first NCAA Tournament victory came last season at home against Lehigh (2-0).

–        Pitt has endured a record breaking 2020-21 campaign with multiple accomplishments and milestones achieved throughout.

–        The Panthers began the fall season 7-0, the best start to a season in program history. Pitt finished the fall 7-1 and 4-0 in ACC play and earned a trip to the ACC Championship Final, the first in school history.

–        On Oct. 20, 2020, Pitt earned the No. 1 ranking in the country via the United Soccer Coaches Poll. The top spot was the first and program history and just the third athletics team at Pitt to be named No. 1 in its respective sports’ poll (football, men’s basketball).

–        After beginning the spring 1-1, Pitt tallied five-straight wins – all conference – to finish the spring regular season 6-1 and 5-1 in league action. The Panthers were a perfect 4-0 at home during that stretch, all of which were shutouts.

–        A program record 10 players were honored by the ACC and 14 awards were handed to the Panthers after the regular season. Pitt collected three Player of the Year awards, Coach of the Year, three First Team, three Second Team, two Third Team and two Freshman Team accolades.

–        Many individual records were broken as well, highlighted by sophomore Valentin Noel, who scored a goal in six straight contests and shattering the previous Pitt record of three. Graduate student Jasper Löeffelsend and freshman Bertin Jacquesson each registered three assists at home against Virginia Tech, tied for second most in a game at Pitt.

–        The Atlantic Coast Conference released its annual All-Conference Teams Wednesday, April 14, and Pitt earned a school record 10 All-ACC honorees, three Player of the Year awardees and Coach of the Year.

–        Graduate student Jasper Löeffelsend was named ACC Defensive Player of the Year. Löeffelsend has cemented himself as one of the best passers in the country, totaling seven assists (1st in ACC/5th in country). His .47 assists per game ratio ranks second in the league. Löeffelsend, along with teammate Bertin Jacquesson, each tallied three assists at home against Virginia Tech, both of which tied for second in program history for a single game.

–        Freshman Bertin Jacquesson made an immediate impact when he arrived at Pitt in the fall, totaling nine points in his first three games. Jacquesson was honored by the ACC with Freshman of the Year. He has three goals, six assists, 29 shots and 14 shots on goal for the season.

–        The Pitt Panthers and Monmouth Hawks meet for the first time in program history Sunday.

–        Monmouth enters the NCAA Tournament Second Round 6-2-1 overall. The Hawks finished the regular season 2-2-1 overall and are currently on a four-game winning streak. Monmouth finished 2-2-1 in MAAC play.

–        The Hawks enter the tournament as the automatic bid from the MAAC, defeating Niagara, Rider and Quinnipiac in the MAAC tournament to the conference title.

–        Sophomore forward Julian Gomez leads the Hawk attack with six goals on the season. His total goals finished first in the MAAC and currently ranks 30th in the country. The attacker has scored a goal in each of his past five games.

–        The Hawks earned multiple All-MAAC awards, including Defensive Player of the Year in George Akampeke and Co-Goalkeeper of the Year in Sean Murray. Akampeke totaled one assist and three shots in eight games played this year, while Murray stopped 33 shots and tallied a .786 save percentage, both good for third in the MAAC.