For the first time this season, while trailing late and dominating possession, Pittsburgh came up with the equalizing goal.  Tommy Williamson pulled the Hounds even in the 85th minute with a one-time blast from 11 yards.  Charleston jumped out to the early lead in the match as Geobel Pérez Oquendo scored in the 8th minute as he broke past the Hounds back line.

Pittsburgh held a huge possession edge in the 37th all-time meeting between the clubs.

With this result, the Hounds (6-4-2, 20 points) remain in second place as they complete a run of 10 games in 40 days.  Pittsburgh will now get a 10-day break between matches, as they’ll return to action on Saturday, July 17, vs Loudoun United FC at Highmark Stadium.

Looking to bounce back from defeat last time out, the Battery got out to an ideal start as Geobel Perez scored his first goal for the club in the ninth minute.

The hosts sprang forward quickly into attack through Nicque Daley, who played the Cuban forward in toward the top of the penalty area, and while Perez’s initial shot was blocked by onrushing Hounds goalkeeper Danny Vitiello, the carom came straight back to Perez and allowed him to carry the ball through and finish into an open net.

Geobel Perez then made crucial intervention at the defensive end as off a Pittsburgh corner kick from the right by Kenardo Forbes teammate Mekeil Williams rose highest to head toward the right side of the net. Perez was stationed on the post and flicked a header up and over the crossbar to clear the danger.

The Battery tried to add to their lead as the opening half went on as first Claudio Repetto was denied from a narrow angle on the left side of the penalty area before Daley sent a finish just wide of the right post as Vitiello closed down the angle well at the top-left edge of the penalty area. The Hounds almost leveled just before halftime, too, as Alex Dixon corkscrewed a cross-shot from the left that hit the crossbar before being cleared behind for a corner kick, leaving Charleston ahead at the break.

The Hounds threatened again three minutes into the second half as a sharp passing move around the penalty area saw Dixon find Cicerone as he cut to the center of the penalty area for a first-time shot that was kept out by an outstanding low one-handed save from Kuzminsky. The Battery then thought they had added a second as Repetto headed home a free kick in the 65th minute only for the offside flag to be raised.

Pittsburgh had another big opportunity moments later as Louis Perez cut past a defender on the left side and delivered a cross to the back post that Todd Wharton headed back toward the left corner, only to see it slide wide of the post. Cicerone then tried a chipped finish with 20 minutes to go from the top-left edge of the penalty area that sailed just over the crossbar.

With five minutes to go, however, the Hounds found an equalizer. Williamson began the play, clipping a backheeled pass through two defenders on the left flank for Louis Perez as he cut through. Louis Perez’s cross was blocked at the near post, but rebounded to Williamson, who fired through traffic from the left side of the penalty area into the right corner of the net.

Williamson set up a potential winner two minutes later as he clipped a cross from the left that Dikwa attempted to steer home with an overhead kick only to see the ball slip wide of the right post. The Battery also threatened moments later as Temi Adesodun got onto a short back-pass but was denied a clear shot as Vitiello came quickly off his line to block the ball out of play.

90+1‘ — Romario Piggott (Charleston Battery) wins a free kick in the defensive half.

88‘ — Attempt saved. Temiloluwa Adesodun (Charleston Battery) left footed shot from a difficult angle and long range on the left is saved in the bottom left corner.

87‘ — Attempt missed. Albert Dikwa (Pittsburgh Riverhounds SC) right footed shot from the centre of the box is close, but misses to the right. Assisted by Thomas Williamson with a cross.

Tommy Williamson hits a hard one from the left side of box — about 10 yards out and through traffic to the right side of goal!

78‘– Burke Fahling (Charleston Battery) is shown the yellow card for a bad foul.

78‘ — Russell Cicerone (Pittsburgh Riverhounds SC) wins a free kick in the defensive half.

76‘ — Joel Bunting (Charleston Battery) wins a free kick in the defensive half.

64‘ — Joel Bunting (Charleston Battery) wins a free kick in the attacking half.

63‘ — Geobel Pérez Oquendo (Charleston Battery) wins a free kick in the defensive half.

55‘ — Jalen Robinson (Pittsburgh Riverhounds SC) wins a free kick in the defensive half.

48′ — Hounds bringing pressure early in the 2nd half… 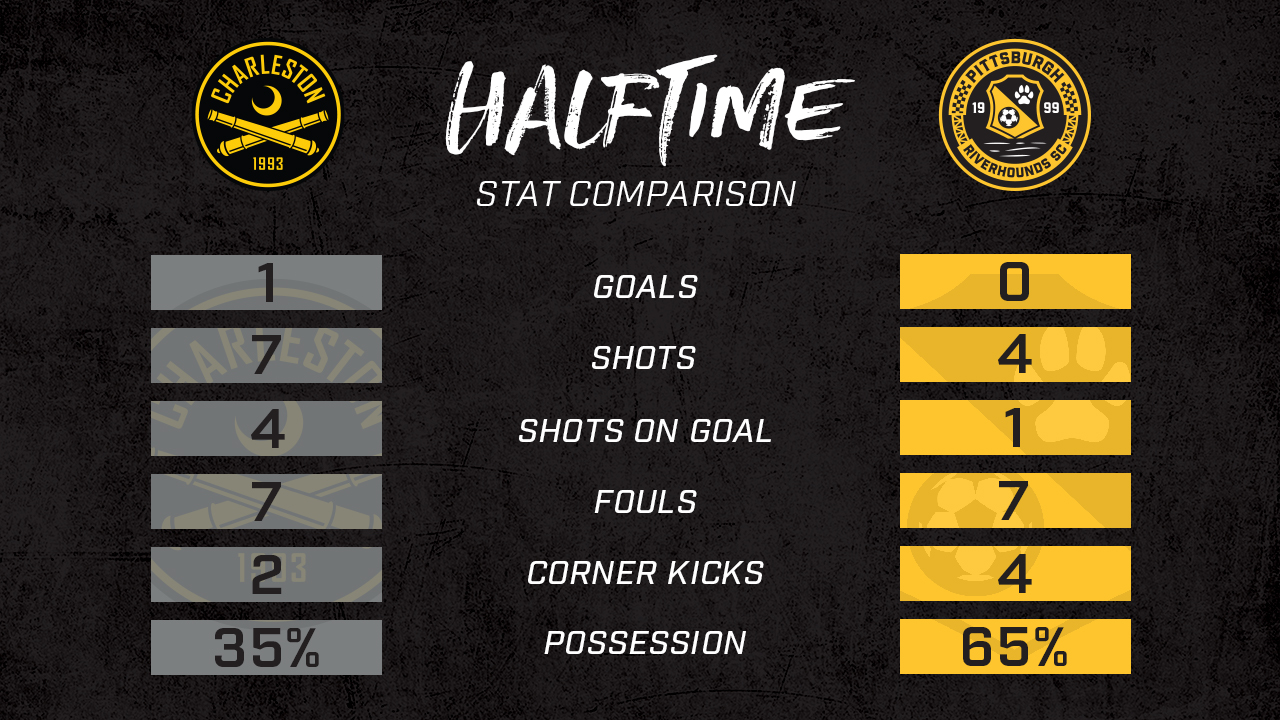 44′ – Off the bar! Dixon with an angled volley from the left side, and he’s denied by the iron. Ball eventually goes out for another Hounds corne

Geobel Pérez Oquendo (Charleston Battery) right footed shot from the centre of the box to the bottom right corner.

1′ – Game begins down in South Carolina!

Look for updates throughout the day including starting lineups and in-game highlights. 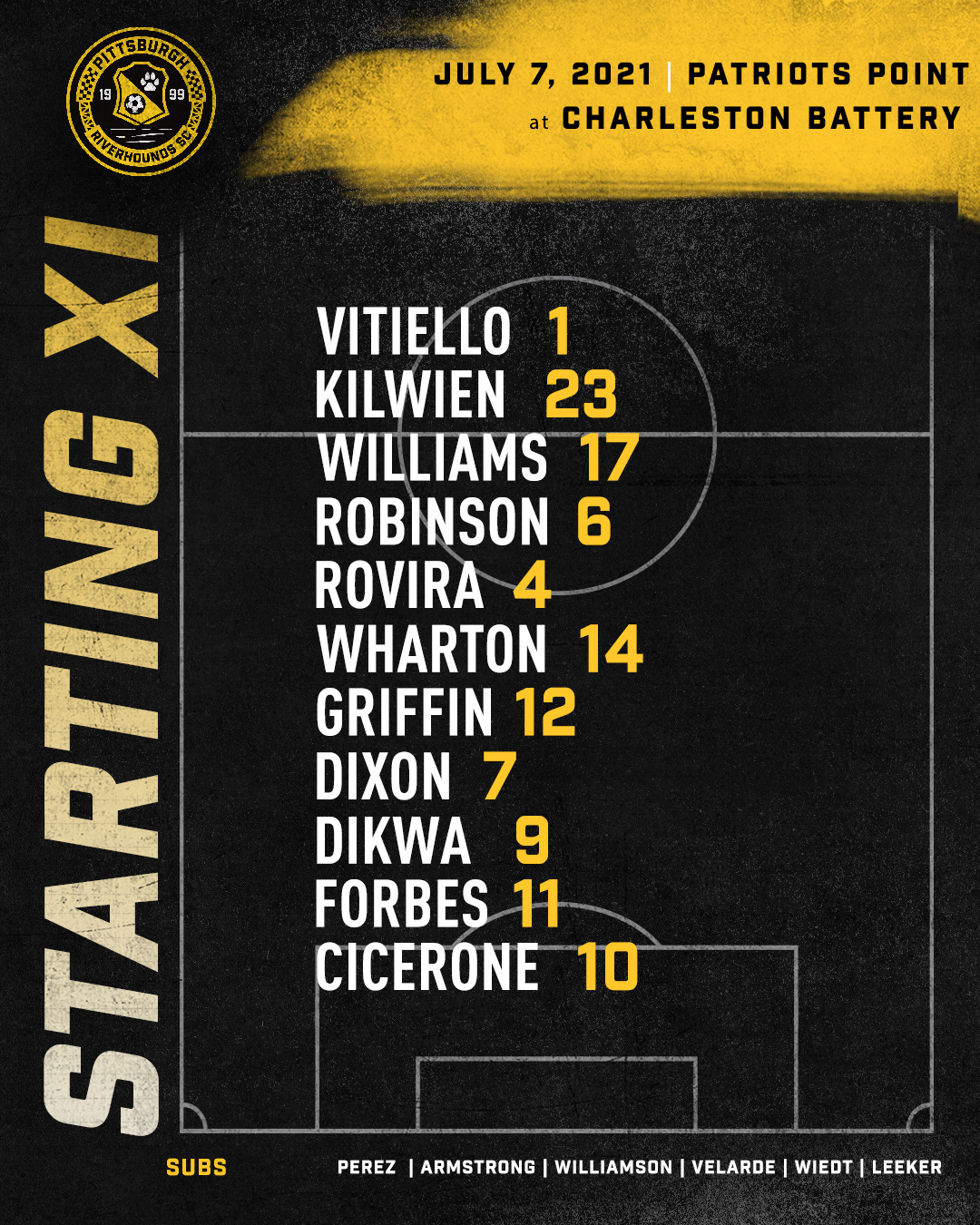 PSN’s Mark Goodman takes a closer look at Charleston, the lone team remaining in the Atlantic Division that the Hounds have yet to face this season and shares his thoughts on the match-up.

❝We have to put them under pressure and make the game a little faster. ❞

Here’s a statement from the Charleston Battery executive chairman Rob Salvatore said in a release regarding moving the match up from 7:30 p.m. to 4 p.m. due to Hurricane Elsa.

“We prioritized the safety of the fans, our partners and the players in the decision to play tomorrow’s match earlier and without fans in attendance,” Battery executive chairman Rob Salvatore said in a release. “Working with the league, delaying the game to later this week or rescheduling to later in the season were unfortunately not options due to an already extremely condensed schedule the remainder of this season.”

The clubs are the two oldest currently playing in the USL Championship, and the matchup provides an opportunity for the clubs’ supporters groups to revive the Old Guard Shield, the annual trophy contested between the five oldest USL clubs at the time — Charleston, Harrisburg, Richmond, Pittsburgh and Rochester. The Hounds are the shield holders, having won it in 2019, while the Battery won the shield in its inaugural season of 2017.

This matchup marks the first time the Hounds will travel to Patriots Point since it opened in 2020, having previously played at Charleston’s former home, Blackbaud Stadium. The clubs last met on Sept.  14, 2019, at Highmark Stadium. Steevan Dos Santos scored the match’s lone goal in the 69th minute to give the Hounds a 1-0 win.

Saturday, the Hounds (6-4-2) notched their second straight home win, downing the Charlotte Independence, 1-0. Anthony Velarde’s goal in first-half stoppage time capped off a dominant effort from the Hounds on both sides of the pitch. The Hounds tallied season highs with 14 shots and nine shots on goal, and they didn’t allow a single Charlotte shot in the first half.

Meanwhile, Charleston dropped a 1-0 result to the Tampa Bay Rowdies last Friday. Sebastián Guenzatti provided the difference by converting a penalty kick in the 68th minute.

Although the Hounds have not done well against Charleston historically, posting a 7-13-13 all-time record and 3-7-7 road record against their Atlantic Division rival, they’ve been better in recent years. The last time the Hounds lost at Charleston was a 3-1 defeat on May 9, 2015.