West Virginia came out on the front foot, then held on before a packed home crowd to upset No. 3 Pitt, 2-1, at Dick Dlesk Soccer Stadium in Morgantown on Monday night.

The win marked the highest-ranked opponent West Virginia has defeated since No. 1 Connecticut on Oct. 18, 2011.

“We never questioned if this group had enough quality and depth – it’s about doing it when it really counts on a big night like tonight,” WVU coach Dan Stratford said. “This was one of the most exciting crowds that I’ve been a part of. I remember playing in this type of atmosphere, and it makes a huge difference. You saw some of that passion and energy come out in our players, as well.”

The Mountaineers took the early lead in the 20th minute when Luke McCormick seized the moment after wrestling the ball away from Pitt’s goalkeeper Nico Campuzano just outside the 18.

Pitt responded early in the second half when Alexander Dexter’s clinical finish came on the receiving end of a Jasper Loefelsend short cross to the far post.

Löeffelsend to Dexter makes it 1-1 in Morgantown.

The Mountaineers continued to handle Pitt’s high press, by effectively playing the ball out of the back and continued to pressure Campuzano throughout the second half.

Inspired by a raucious crowd, WVU found the game winner in the 75th minute when Ryan Baer sent a bending shot from the right corner of the box toward the back post.  Adam Burchell set himself in excellent position, nudging inside Pitt’s defender on the far post, Loeffelsend, to put a well-placed header into back post opening area.

Pitt pushed for the equalizer in the final 15 minutes, but were not up to the task, as West Virginia held on for the upset victory.

Look for a more detailed recap and postgame reaction here later in the evening and early Tuesday.

90′ |  Pitt with one last free kick chance and Petkovic misses it right of goal. Then Noel gets a chance as he cuts between pair of WVU defenders but misses it right.

86′ | WVU with lots of space to counter — Kopovics sends a shot but saved by Campuzano!

81′ | Great chance for Pitt. Nearly converts on ball played to him by near post. WVU keeper Tekesky takes it off the face and out for corner.

Burchell gets great position to nudge inside of Jasper Loeffelsend to put header into back post opening. Nice ball in from Ryan Baer. Pitt needs to defend better in the box.

67' | Steven Tekesky gets a finger tip on a Panther shot attempt to keep us even!

67′ |  Feitosa with nice shot chances which is saved by WVU’s Steven Tekesky.  Ensuing corner, Feitosa tries a bicycle kick but misses on the attempt.

Loeffelsend with a nice bending short cross to far post and clinical finish for Pitt’s most tenured player. Dexter now with 19 career goals First shot on frame for Panthers too.

West Virginia’s on the front foot and look sharper on their home (grass) turf. High press effective and they’ve played it out of the back against Pitt effectively. Interesting to see adjustments Coach Vidovich makes at half.

Alexander Dexter (In) Luke Mort (Out)

Mountaineers get on the board early!
High press pays off as Pitt’s GK Nico Campuzano comes way out to play a ball outside box and is tackled with ball wrestled away from him. It’s Luke McCormick there to put it in for the 1-0 lead 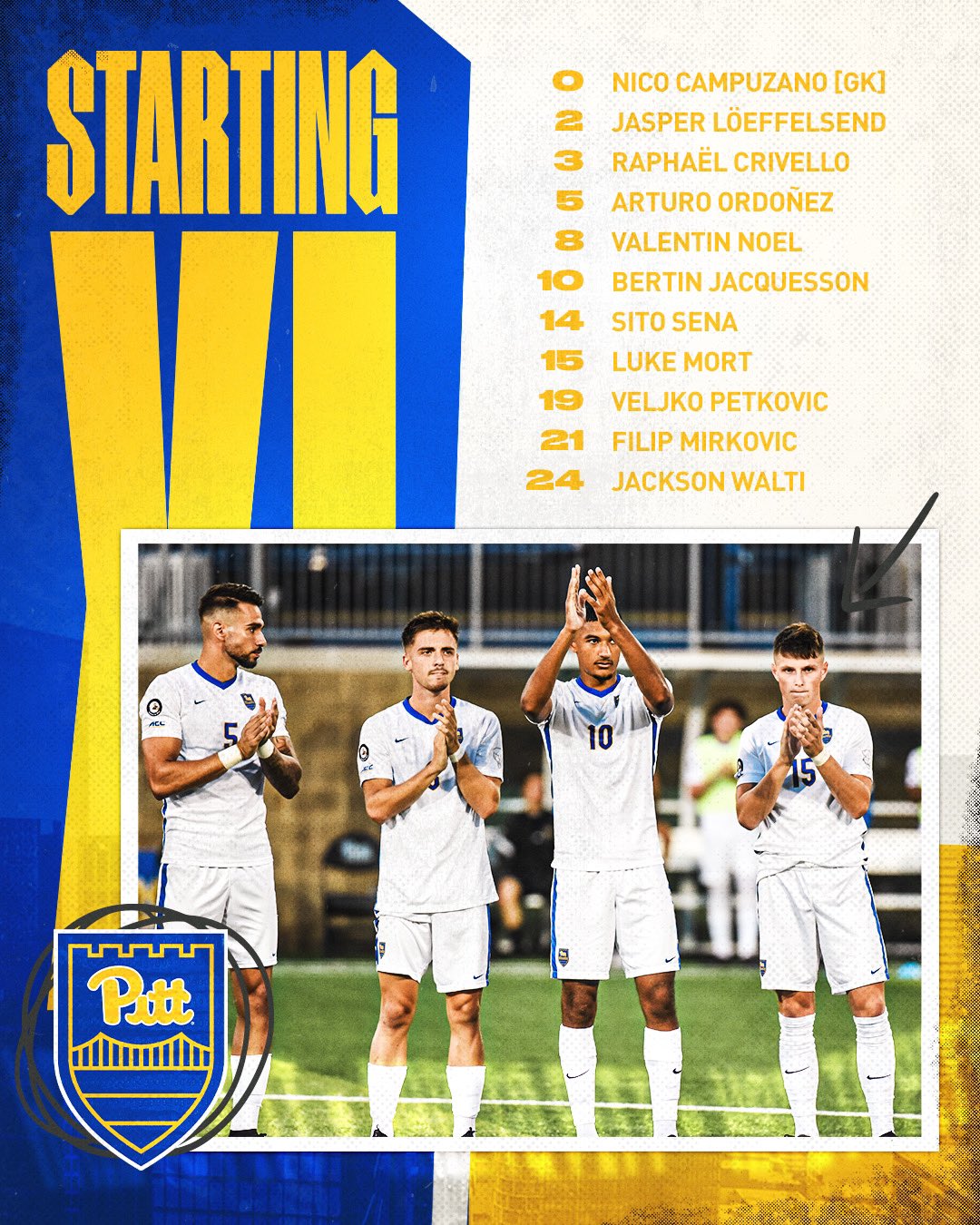 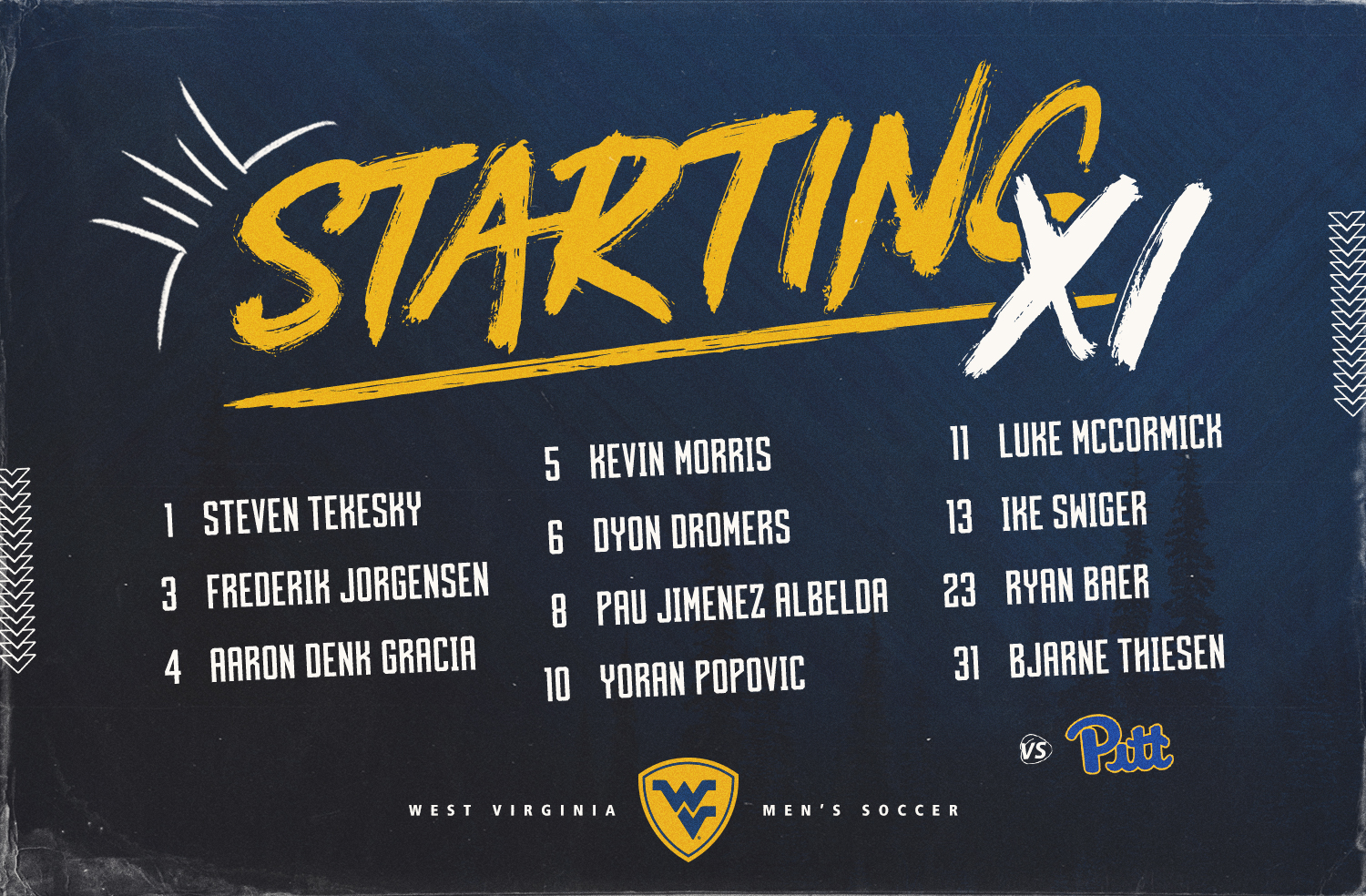 – Monday marks the 50th edition of the Backyard Brawl.

– West Virginia enters the match 1-0 as it defeated Robert Morris 2-0 on the road Thursday.

– The Mountaineers return 15 letterwinners from a team that finished 6-3-1 a year ago. Headlining the returnees is senior goalkeeper Steven Tekesky, senior Ike Swiger and junior Luke McCormick, all of who All-MAC First Team last season.

– West Virginia as a team finished seventh in the country in shot accuracy a year ago with .532 mark.

– Tekesky finished sixth in the nation in shutouts (six) and 15th in save percentage (.838) a year ago.

– The Panthers opened the 2021 campaign with a 7-0 shutout victory over Duquesne at Ambrose Urbanic Field.

– The seven goals were the most since Pitt’s seven in a shutout victory against West Virginia at home Sept. 26, 2017.

– Junior midfielder Veljko Petkovic began the 2021 season with a career night against Duquesne at home, scoring two goals and tallying two assists for a career-high six points in Pitt’s 7-0 victory.

– Petkovic scored two goals midway through the first half one minute and eight seconds apart, setting a school record for fastest consecutive goals scored by the same player.

– The Queens, N.Y., native was named TopDrawerSoccer’s Player of the Year last season and was named to its Pre-Season Best XI First Team.

– Junior midfielder Valentin Noel had one of the best single-season performances in Pitt men’s soccer history a year ago.

– The Niort, France, native scored eight goals and tallied two assists during the fall campaign and finished with six goals during the spring. He registered three multi-goal games in total last year.

– His total goal and point totals each finished tied for fifth in a single-season at Pitt.

– Noel was invited to the prestigious MAC Hermann Trophy presentation in St. Louis, Mo., as a finalist for the MAC Hermann award, given to men’s and women’s soccer’s national player of the year.

– Noel scored one goal and recorded one assists in Pitt’s season-opening 7-0 shutout of Duquesne Aug. 26.

– The Panthers return home Friday, Sept. 3 for a 7 PM kick-off against Lehigh.

– Live coverage can be found on ACCNX.