The home side controlled play throughout the match, while taking advantage of a couple of Pittsburgh defensive lapses, with goals coming from Wilson Harris and Enoch Mushagalusa.

Goalkeeper Jahmali Waite had four saves, though he did make one errant pass that led to the opening goal by Harris.

Louisville City FC remain the only undefeated team in the USL Championship this season, while the Hounds drop to an overall record of 5-2-1.

The Hounds will return to action

90′ — We will have three minutes of stoppage time.

87′ — Say this for the Hounds: they’re still fighting. Cicerone wins a corner with a nice effort in the box, and at least the Hounds are giving everything they’ve got despite being up against it.

85′ — Russell Cicerone makes a solid run at the net, but another Louisville tackle keeps the Hounds from getting anything out of it. LouCity has shown its class in every way tonight.

80′ — RED CARD, PITTSBURGH, DANE KELLY: Bad goes to worse for the Riverhounds, as Kelly catches a LouCity player with his arm and gets sent off for his troubles. That’s a harsh call, but the Hounds are down to 10 for the last 10.

77′ — For my money, Wilson Harris is an easy choice for Man of the Match tonight. The Hounds just haven’t been able to contain him.

75′ — Harris plays in Corben Bone for what should have been no. 3 for Louisville, but Waite again makes the save. Waite has actually given a strong effort in this one; this could easily be 4-0 if he wasn’t on his game.

69′ — Harris again looking dangerous at the net, but Waite is equal to the task here. Louisville has been a step ahead all night long.

67′ — Dane Kelly can’t get the ball off his foot in the box. I’m not sure whether it’s the stumbles on the pitch or uncertainty, but Pittsburgh just isn’t taking shots when they come.

63′ — Harris nearly had the third marker there, as he had a good look in the box. Had he not stumbled on the shot, Waite wouldn’t have had much chance to keep it out.

59′ — The way this match is progressing, if I were betting on it (which, as always, I will not do), I’d say LouCity’s more likely to score the next goal. Hounds just don’t look dangerous.

56′ — Free kick to Pittsburgh at midfield. This deficit certainly isn’t impossible to overcome (as my Bristol Rovers side showed today in turning 2-0 into a 4-3 win in England’s League Two), but it’s not going to happen with the way the Hounds are playing right now.

52′ — Alex Dixon with a decent run down the right side, but the finish leaves plenty to be desired, landing somewhere between the Coopers and the Unbridled. The Hounds have a mountain to climb.

50′ — YELLOW CARD, PITTSBURGH: ARTURO ORDONEZ. Ordonez is shown a yellow for a challenge in the attacking third on Mushagalusa. Louisville can’t do anything with the free kick.

HALF — Apparently our refs tonight are operating Bundesliga-style, as there will be no stoppage time in the first half. Louisville City 2 (Harris 20, Mushagalusa 39), Pittsburgh Riverhounds 0.

42′ — Albert Dikwa gets the best look at the goal that the Hounds have had this half, as he gets his head to the ball inside the box. Kyle Morton is forced to make a save for the first time tonight.

39′ — GOAL, LOUISVILLE: And that’s exactly what Pittsburgh does. This time it’s Enoch Mushagalusa off the feed from Wilson Harris, a reverse of the first goal. It’s past Waite on his left side, and Louisville leads it 2-0.

38′ — Amadou Dia nearly finds some space in the box for Louisville, but the Hounds’ defense is able to get the ball away. Pittsburgh cannot afford to give up a second.

35′ — Russell Cicerone can’t get the ball off his foot as Sean Totsch makes a great defensive play to thwart the Riverhounds in the box. That should have been an equalizer for the Hounds if the shot had come.

28′ — Brian Ownby judged offside on the attack for Louisville City. I’m not so sure about that one; Pittsburgh might have gotten away with one there in failing to track Ownby.

23′ — Russell Cicerone gets a decent look at the mesh, but it’s heading over the bar and into the crowd. Hounds need a better response than that.

20′ — GOAL, LOUISVILLE: Hounds completely lose track of Wilson Harris by the post, who is easily able to guide the ball home on the cross from Mushagalusa. Pittsburgh cannot be happy about that one.

17′ — Sorry for the slight delay in getting updates here; had a couple technical diffculties likely related to cloudy weather tonight in Louisville. Everything seems to be working well now and hopefully it stays that way.

16′ — Enoch Mushagalusa of Louisville goes down in the box after a Pittsburgh tackle, but the referee’s not interested. That was the right decision; there was nothing in that.

14′ — Hounds with a dangerous attack after getting nothing from the first corner. This one finds a head, but that’s as far as it goes. Still, much better on the attack from Pittsburgh.

13′ — Mistake at the back for Louisville and the Hounds will have a corner. This could be a big break for Pittsburgh. 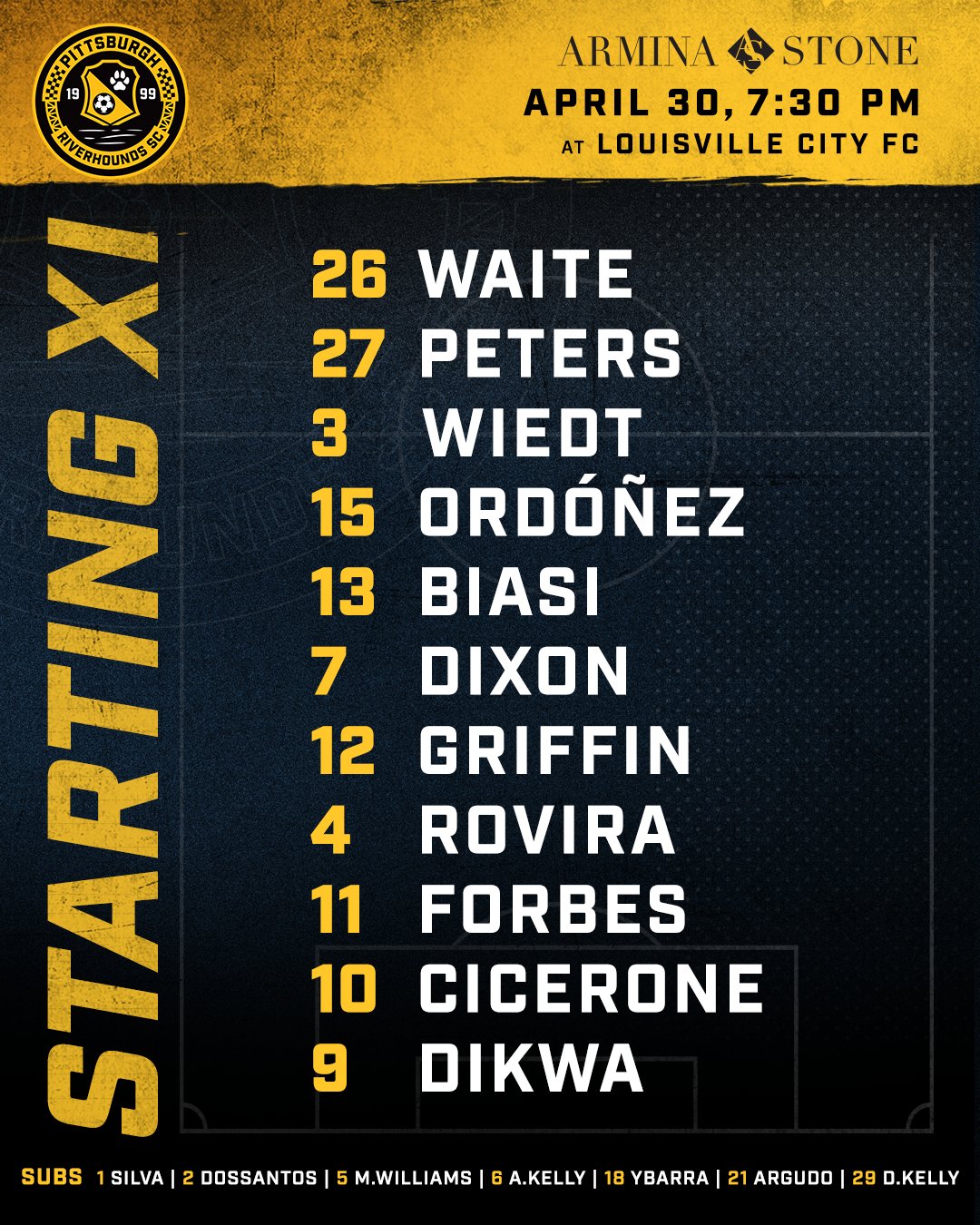 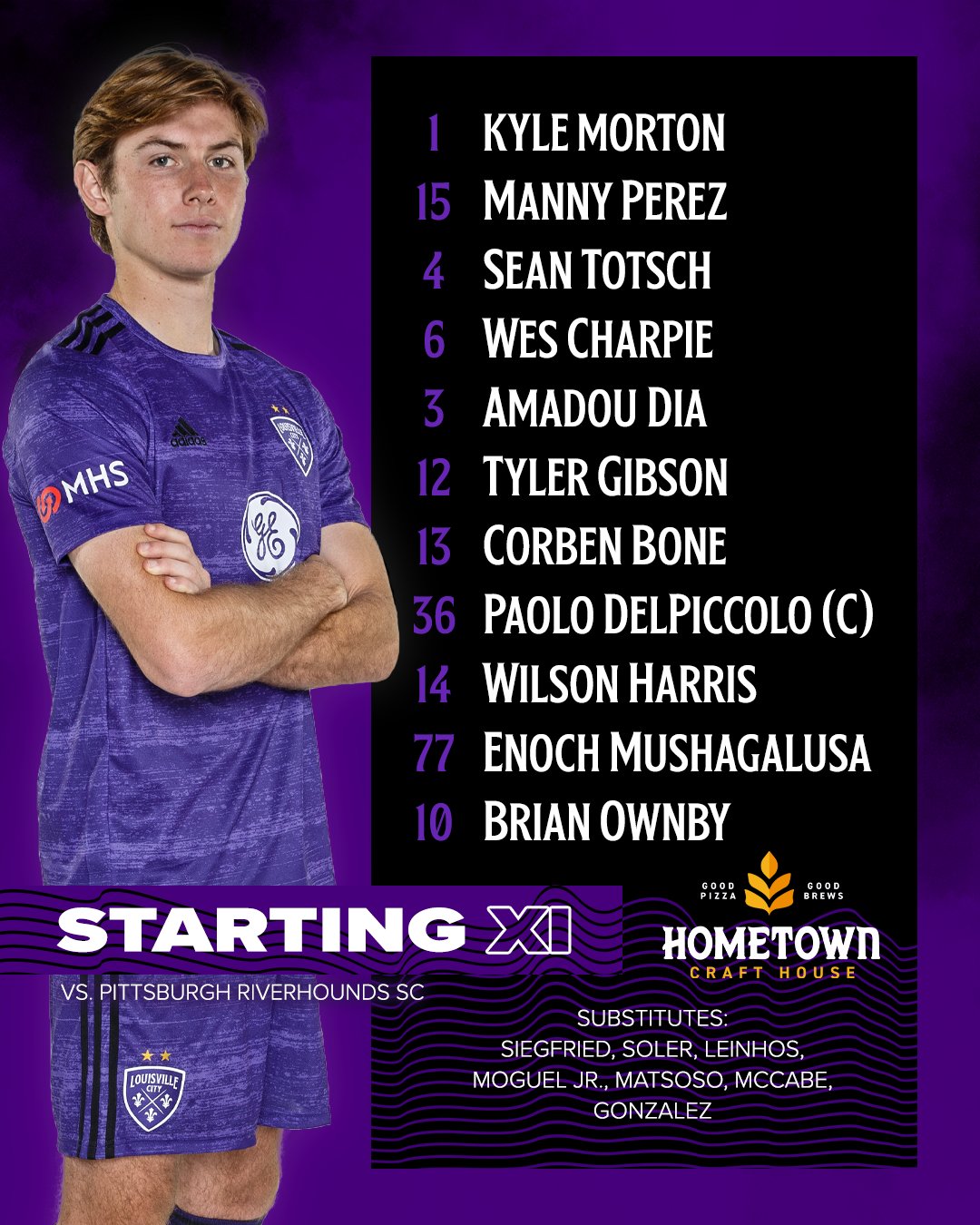 Top-of-Table showdown on tap; plus does Pittsburgh media ‘shun’ the Riverhounds?

It is a renewal of acquaintances for the two clubs, who did not meet in 2021 because of the divisional alignment a season ago. That was the first time since Louisville joined the league in 2015 the teams did not play at least twice during a year, which they will do this year with today’s game and the return match in Pittsburgh on Sept. 10.

Unusually, history favors the road team in this series. The visitors are 9-2-4 in 15 previous meetings, which includes a 4-2-1 for the Hounds in the Derby City. The teams have met twice at Lynn Family Stadium, both in 2020. The Hounds won the first-ever match there, 3-1, but Louisville exacted a measure of revenge by knocking the Hounds of the playoffs, 2-0.

While the Run for the Roses isn’t until next week in Louisville, the Hounds’ horses up front have been running wild through the first two months of the season. Dane Kelly shares the USL Championship lead with six goals, and Albert Dikwa is just behind him with four. Together, they are the highest scoring pair of players in the league at 10, and that doesn’t even factor in 2021 top scorer Russell Cicerone, who picked up his second goal of the year last Saturday against Atlanta.

In perhaps a bit of a role reversal, the Hounds’ offense is best in the league on a goals-per-game basis, while Louisville has made its way to the top spot with the league’s stingiest defense at just four goals allowed in eight games. That includes a league-best five clean sheets for former Hounds goalkeeper Kyle Morton, who has started every game for Louisville since coming over in the offseason from the Houston Dynamo of MLS.

The two teams already have an idea of how they stack up this year after having played out a 1-1 draw in Pittsburgh during the preseason on Feb. 26, when an early goal by City’s top scorer Wilson Harris was negated by an Alex Dixon penalty kick. But that game, with its unlimited substitutions, should have little bearing on the first regular-season meeting in more than 21 months between the only two teams to reach the Eastern Conference playoffs in all of the past five seasons.