For the second time this season, the Pittsburgh Riverhounds SC battled Detroit City FC to a 1-1 draw, this time before 4,273 fans at Highmark Stadium on Saturday night.

And also for the second time, a strong first half effort from Pittsburgh was countered by an opportunistic Detroit City FC charge in the second half which resulted in another deadlock after 90 minutes.

“We had plenty of good opportunities to put the game away, and get the second goal, and we didn’t capitalize,” Riverhounds SC Head Coach Bob Lilley said following the match.

“We missed the target on a number of chances.  They’re always going to be dangerous because they have a lot of speed up top, and they can get in behind you.  They hung around. Then got one.”

The Hounds created their share of chances in the first half, and could have pulled ahead by multiple goals.

Not happy with the movement from his forwards early on, Lilley made a quick adjustment 12 minutes into the match when he pulled Albert Dikwa aside — giving him orders to swap with Russell Cicerone.

Dikwa moved over to the left right side of the attacking top line, while Cicerone moved to the middle.

“They were marking our front-runners,” Lilley explained. “Dikwa, Russ (Cicerone) and Argudo was a bit higher. They’re a big physical back line. They were marking, and we needed more movement.”

The Hounds’ veteran coach’s instructions to Dikwa were pretty straighforward: don’t be too stagnet. He pointed out that posting up the defenders as a target forward wasn’t good enough.

‘Spin out on them,” Lilley pleaded to Dikwa. “Get into spaces,”

After these making these adjustments, more chances started to come for the Hounds.

Luis Argudo, getting the start as an attacking central midfielder, fed Russell Cicerone in the 24th minute for a clear chance, but DCFC’s goalkeeper Nate Steinwacher came off his line to deny a goal scoring chance.

Eventually, Dikwa gave the Hounds the lead in the 30th minute, following a solid build-up of play that began with Kenardo Forbes and Alex Dixon showing plenty of patience and vision to extend possession and draw defenders toward them, then finding Luis Argudo in the center edge of the box.

Argudo delivered a well-placed thru ball on the ground between the stretched out defenders for Albert Dikwa, who made a run to beat Steinwacher to the ball — by a hair — and cleverly redirected the ball with his outside foot to the right side of goal.

A few moments later — in the 39th minute it appeared, for a second, that the Hounds doubled the lead when Jelani Peters headed a ball into goal in a crowded scrum at the far post after a Kenardo Forbes corner kick chance.

Then, Pittsburgh defender Shane Wiedt was issued a yellow card from the play.

“It was a perfectly good goal disallowed,” Lilley said.

Two potential ⁦@RiverhoundsSC⁩ goals now disallowed. The Detroit goalie was interfered with. Then he goes after players. Could have been yellow card on him —nothing called. Still 1-0 #Hounds pic.twitter.com/U1o96PWYNT

“I don’t agree with the call.  Jelani didn’t push anyone. It was a high ball. We pushed it over the line,” Lilley stated. “I thought they (the officials) were allowing a physical game. There were physical challenges that could have been construed as a yellow card, that were not acknowledged. I thought they were allowing a physical game. I don’t care if the game was being call tight. I don’t see a foul in any scenario. That’s a big problem. You can’t have a restart, and bail teams out. There’s a free ball in the box. There’s no one who impeded the goalie. Or blocked someone. It’s crazy. It’s irresponsible, because you’re going to go watch the tape, and see nothing.”

Even as Lilley expressed his displeasure with the officials, he acknowledged that his team had chances they couldn’t put away.

In the latter stages of the first half, Kenardo Forbes near half-sissor, one-time effort from 23 yards hit with lots of pace, but right at Steinwacher.  In the 44th minute, Dixon set up Argudo in the box, but the right footed shot attempt sailed way over the bar.

“We were trying to put too many shots in the upper half instead of driving them low,” Lilley added.  “We’re being wasteful.”

Despite the Hounds controlling play for much of the match and into the second half, Detroit City FC seized an opportunity in the 70th minute when a well-placed diagonal ball from Michael Bryant deep on right side found DCFC’s Deklynn Wynn with plenty of space on left side.

“It’s disappointing, because it was well documented all week that we can’t get caught watching when they hit a diagonal to the wing back,” Lilley said.

“Obviously, on the goal, we didn’t account for their wing back.  We didn’t do our job in that moment. He came in so clean, he had all day to pick out a runner.”

How much did this defensive gaffe bother Lilley?

“On a scale of one to 10, that was a 10 in terms of a defensive mental lapse,” Lilley said of the Detroit goal.

It was the first goal the Riverhounds had conceded at Highmark Stadium since the first half of the home opener against Hartford Athletic on March 19 and ended a five-game shutout streak at home across all competitions.

More late chances would follow for Pittsburgh from Dikwa, Dane Kelly, who entered the match in the 70th minute, and Forbes, but they weren’t sharp enough to regain the lead.

“We had 20 minutes, and I would’ve liked to have seen us ferocious in those last 20 minutes,” Lilley said. “There has to be more energy. We have to find it from somewhere to put an all-out press in those last 20 minutes to force something over the goal line. We got a couple balls in the box, but we didn’t get a clear look during that time. That’s not the response we’re looking for late in the game, home or away.”

The Hounds (now 7-3-3 overall, good for 24 points) ended the match with most of the statistical advantages, including possession (55%-45%) and shots (16-10, 6-2 on target), but still remain in fourth place in the Eastern Conference standings, one point behind Detroit City FC.

Lilley didn’t feel like his squad played with enough energy after conceding an equalizing goal, but still have 20-plus minutes to get one back.

The Riverhounds travel to Charleston and Rio Grande Valley the next two weeks. They’ll look to get their first road victory since a 4-3 win at FC Tulsa on April 9. They’ve gone 0-3-1 in their last four road games and are without a win in its last three matches.

Look for starting lineups, pregame, in-game and post match highlights to be posted here on our Match Day Blog

Shane Wiedt went down with injury after contesting ball in air. Trainer out. As he comes off, walking gingerly.

Toby SIms will come in for Wiedt.

Maxi Rodriguez with the goal.

Great diagonal ball from deep on right side finds speedy Deklynn Wynn with all kinds of space on left side. Move through and finds Rodriguez who buries his chance — and just like that we’re level

Dikwa with a solid chance.
Griffin with a nice feed.

64′ –Cicerone cuts one loose from 23 yards on counter, but it goes well over the bar and into Paul Child Stand.

55′ — As well as the Hounds have played, this match remains one play away from turning. Dikwa & Cicerone continue to bring pressure, covering a lot of ground. Argudo has been creative in attacking midfield role (according to my calculations) has created 4 chances
46′ — no changes for Hounds at start of 2nd half.

Hounds w/ possession (58/42) & shots (7-6, 1-0), brought plenty of pressure, especially in the latter part of the half.
Lilley made adjustment to move Dikwa to left side, which led to lone goal.
40′ — Nice build up for Hounds leads to Wiedt cross from right side — but Steinwacher goes up for it to prevent Forbes a header chance.
39′ — Things getting fiesty!! Dikwa and Steinwacher collide way off the line, and corner for Hounds. Hounds appear to win scrum on back post, Peters header goes into goal, but official waves it off. Players pushing & shoving in goal — finally separated.
YELLOW CARD — after smoke cleared — Pittsburgh’s Shane Wiedt was assessed a yellow card.
Here’s a look at the goal…

Albert Dikwa pokes it through! Luis Argudo with a clever assist.

24′ — Hounds come back, Cicerone with a chance but DCFC keeper Nate Steinwacher comes off his line to deny the shot attempt.

22′ — Lilley giving Forbes an earful for a bad pass that led to Detroit counter chance.

18′ — Hounds already adjusting to things. Dikwa comes over for about a 25 sec talk with Bob Lilley, then switches over to left side of attacking line, while Cicerone is now central forward. Argudo and Forbes are pushing higher in central MF, while Griffin stays deep

14′ — Second Detroit corner goes to far post but deflected out past end line by DCFC player.

10′ — Neither side with a shot on frame to this point. Hounds get into box as Cicerone sends a ball across for Dikwa with back to goal, b

Albert Dikwa and Jahmali Waite get the nod tonight.  Mekeil Williams is out on international duty, 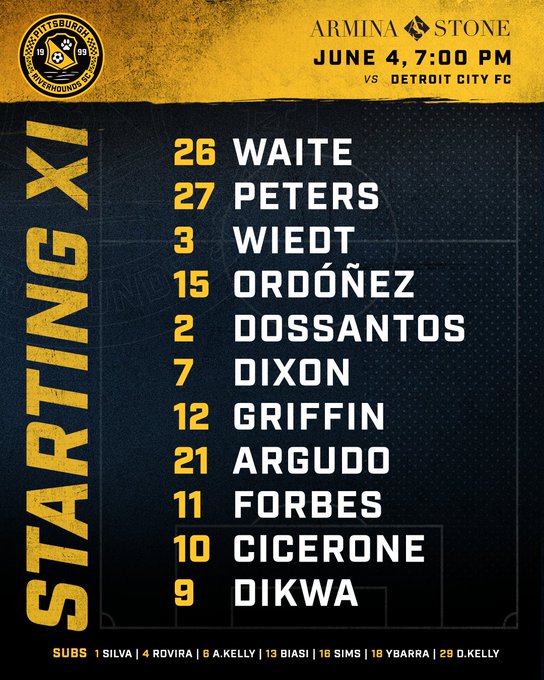 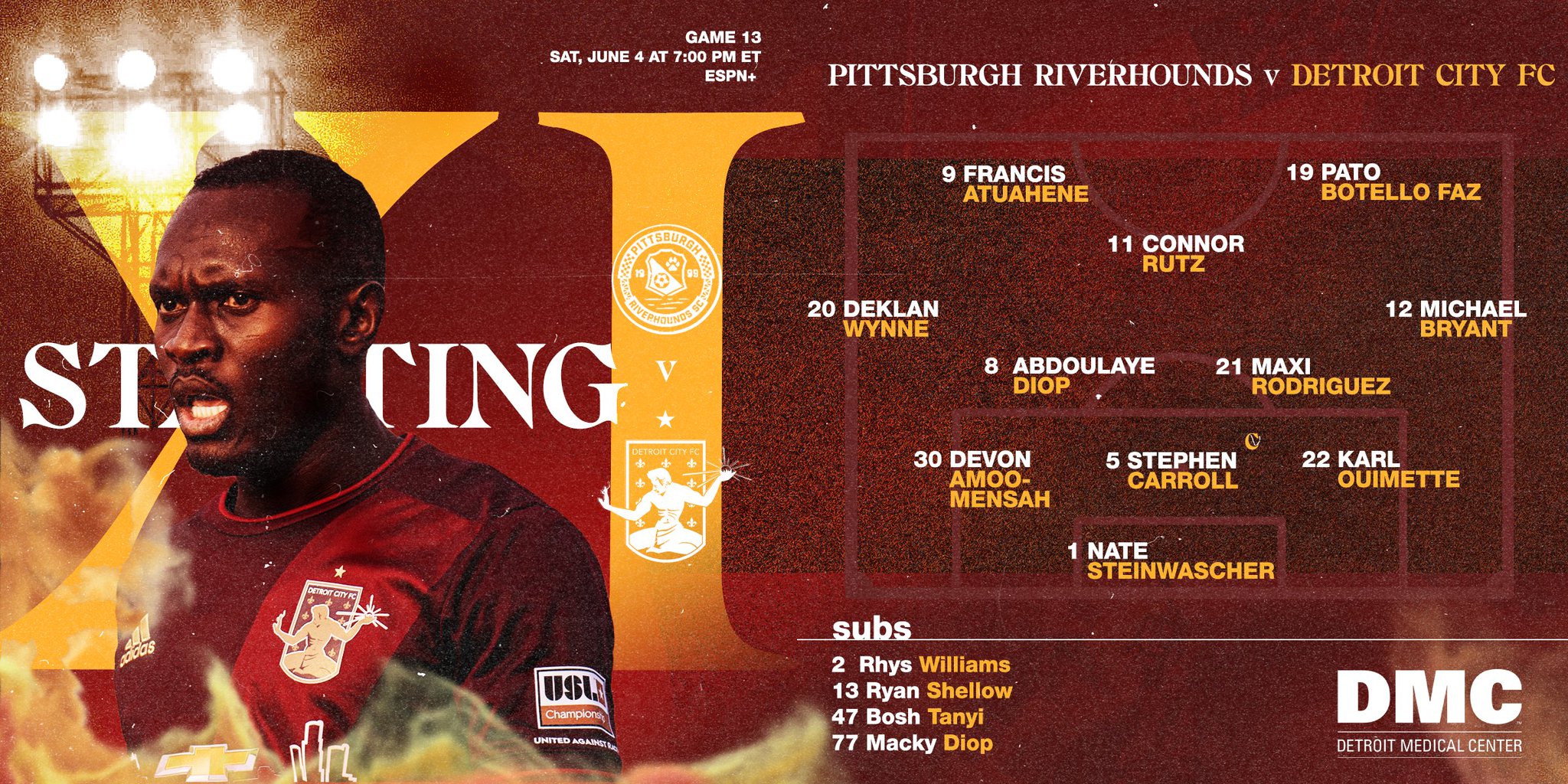 Hounds Notebook: The new kids on the block, Detroit City FC off to uproarious start in USL Championship

Hounds Notebook: The new kids on the block, Detroit City FC off to uproarious start in USL Championship
Takeaways & Player Grades: Hounds have ‘soul searching to do’
Loading Comments...