The Pittsburgh Riverhounds SC got back on the winning track, defeating NY Red Bulls II, 3-0, at MSU Soccer Park in Montclair, New Jersey, on Friday evening.

The Hounds (8-6-4, 27 points) ended a six-match winless skid on the strength of Alex Dixon’s early goal in the 12th minute, followed by Russell Cicerone’s brace, while Jahmali Waite picked up the club’s first clean sheet since mid-May.

Cicerone’s goals move him into the team lead with seven on the season, and he also ascends to ninth in club history with 23 goals in just two seasons for the Hounds.

Waite needed just one save to record the shutout, and Hounds midfielder Angelo Kelly played his 100th regular-season match in the USL Championship.

New York came out taking the initiative, and Jeremy Rafanello forced Waite into his only save — blocking away a short-hopping shot — less than a minute into the game.

But despite the hosts holding 56.5 percent of possession, the Hounds were the more dangerous team with a 15-7 shots edge and a quick opening goal in the 12th minute.

Dixon netted the opener when Kenardo Forbes located him on the left side with a long cross-field pass. With acres of space, Dixon cut into the box and finished with his right foot for his fourth goal of the year. The strike also gave Forbes his 50th career USL Championship assist, increasing his league-record total.

Cicerone made it 2-0 in the 19th minute when Forbes again found his man behind the defense. New York goalkeeper AJ Marcucci got a touch on the ball, but Cicerone was able to turn the corner and finish from a sharp angle.

As they did for the remainder of the first half, the Hounds continued to press forward for a third goal to put the game away.

The goal came in the 67th minute, when Dani Rovira weighted a pass perfectly to Cicerone, who received the ball in stride behind the defense and fired high into the roof of the net to make it 3-0.

The Hounds continued to press for more goals, with Dixon coming closest on a second-chance header cleared off the line, but Red Bulls II goalkeeper Derrek Chan — a halftime injury replacement for Marcucci — did well to make four saves after the break.

Pittsburgh will return to action this coming week with a pair of home matches on Wednesday (vs Indy Eleven) and Saturday (The Miami FC).

Follow along here for the latest match updates, including starting lineups and game’s key moments and highlights.

90+2′ – Great balance by Jesse Williams to play through the foul, and he puts Dixon in on goal! The shot wasn’t on, and his pass rolls across goal, just out of Dane Kelly’s reach.

Another milestone tonight in Jersey….

Congrats to @Angelo10kelly, who is playing his 100th @USLChampionship regular-season match!

86′ — SUB — HOUNDS — Angelo Kelly will give the captain, Kenardo Forbes, the rest of the night off.

82′ — Derrek Chan making some big saves to keep this one at 3-0. Hounds keep bringing the pressure. Danny Griffin, Alex Dixon and Kenardo Forbes all sending the kitchen sink at the former UC Davis keeper. 78′ — Adebayo-Smith gets booked for a foul on Biasi out wide. In the interest of fairness, that seemed a bit harsh on the NY forward, too. Forbes goes for goal on the free kick and forces a good save from Chan.

It’s Russell Cicerone with his second of the night.

What a finish!
Buries it top shelf with all kinds of power.
Fantastic ball behind defense from Dani Rovira (his third assist of season)
‘

60′ — Three cutbacks for Russ Cicerone trying to shake defenders after getting loose on a breakaway, and RBII keeper Derrek Chen with the leg save to keep Hounds lead at 2-0.

Red Bulls II will go ahead with a GK change at half. Derrek Chan enters the game, replacing AJ Marcucci.

45+2′ – Marcucci and Cicerone collide in front of goal, and the GK takes the worst of it being at full extension. Trainers out to check on the NYRB man.

40’ – Good save by Marcucci for NY, as Rovira’s low shot from distance gets a slight touch from Cicerone to redirect.

Patience on the ball under pressure from the keeper.

Cicerone receives the pass in the box, circles wide around the keeper and finishes from the tight angle along the ground!

Dixon with acres of space down the left side, and he cuts into the box for the right-footed finish!

Some notes ahead of tonight's @Riverhounds – @NYRBII clash.

RBII have been one of Hounds most common opponents in past eight yrs. 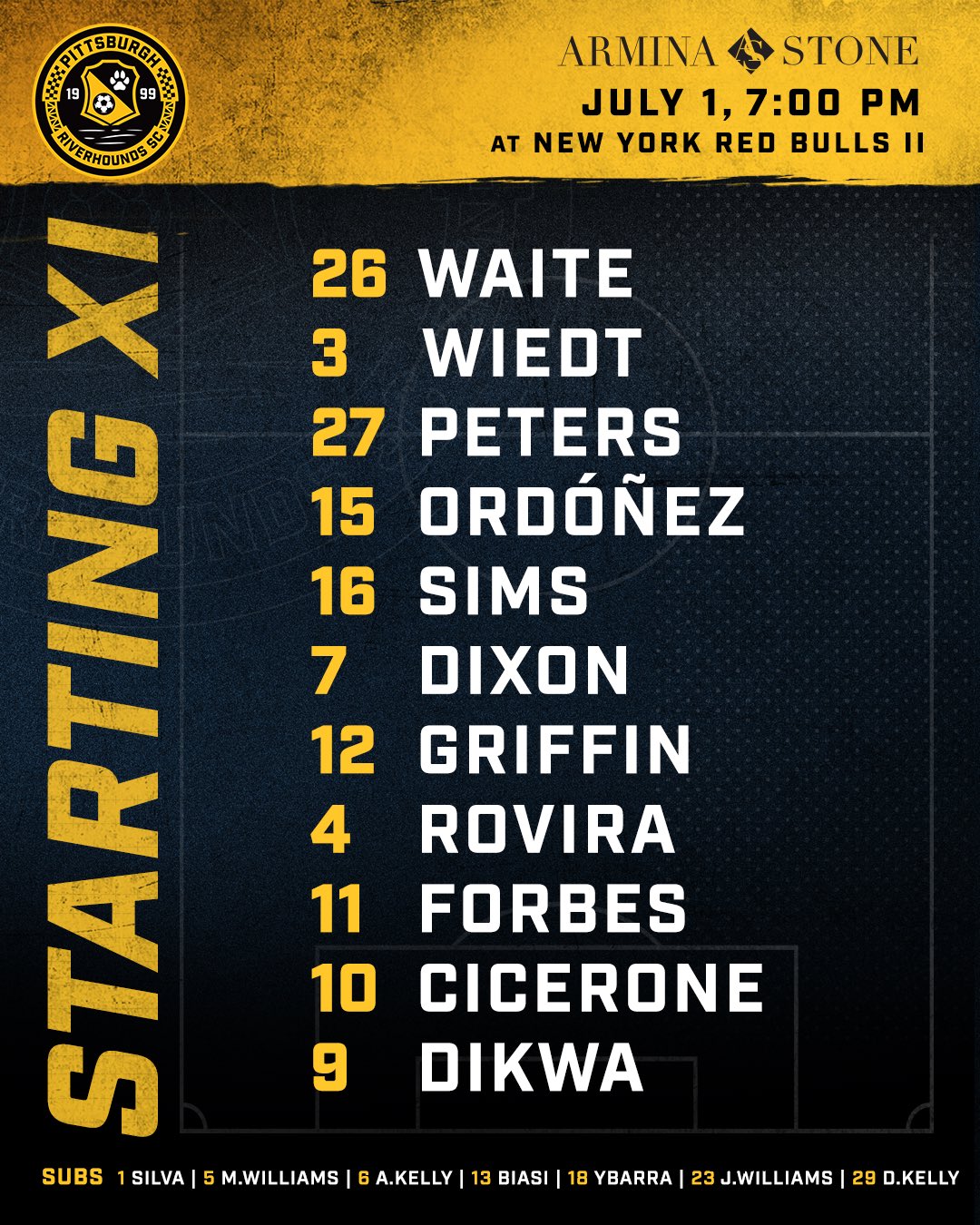