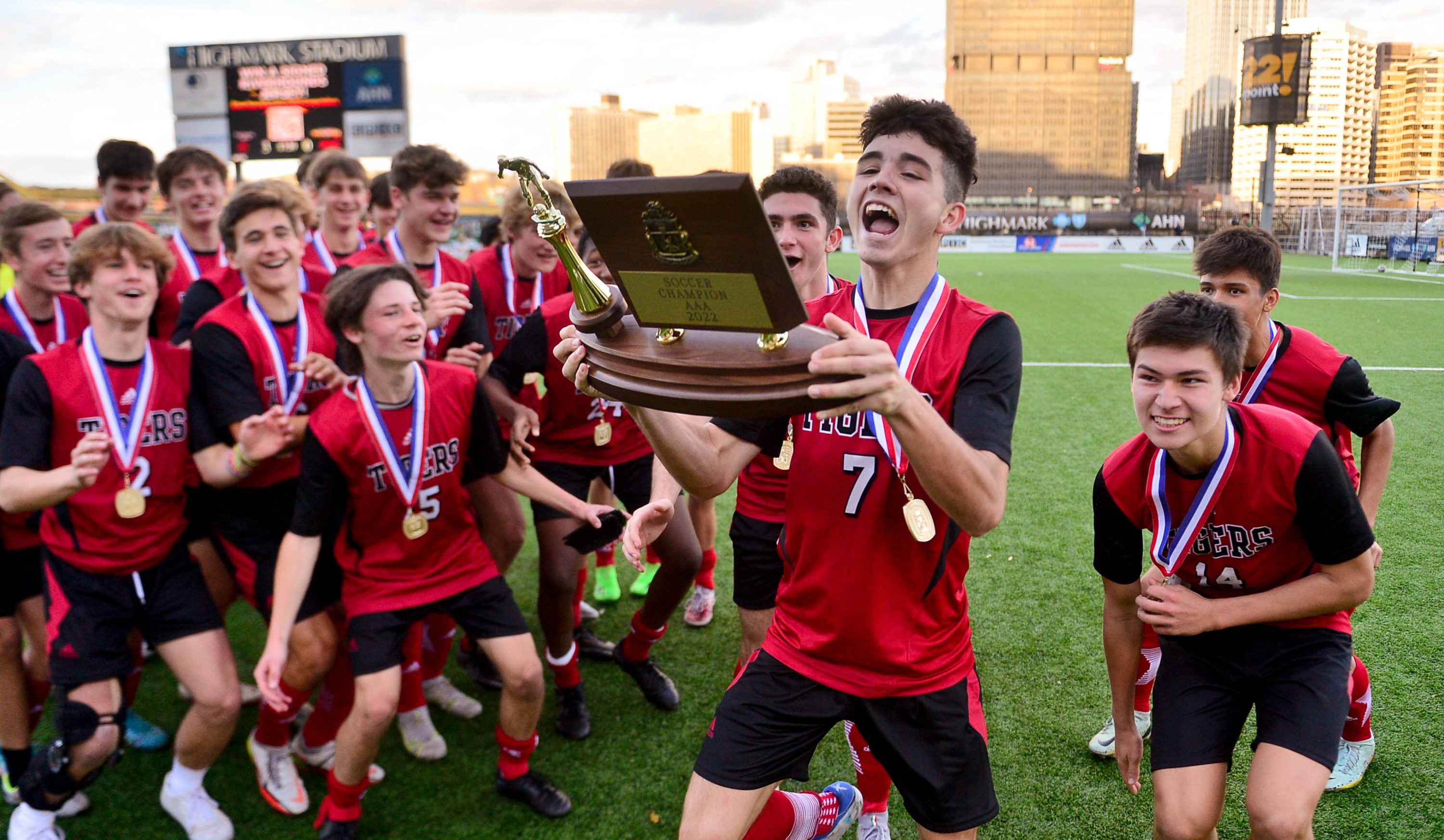 Every dog has its day, and the underdogs have certainly had their days in these WPIAL playoffs. On Saturday, both Moon soccer programs rolled into the home of the Riverhounds and left as top dogs.

After the girls’ team ended an epic 80-game unbeaten streak by Mars, the boys’ team gave No. 11 seed and section rival Ambridge a reality check that dashed its dreams of an improbable first-ever title.

Moon broke through with two goals in the final ten minutes of the first half, including a decisive strike by Akron commit Ryan Kopay, en route to a 3-0 victory over the Bridgers in the WPIAL Boys Class 3A Final on an unseasonably warm afternoon on the South Shore.

Ten minutes into the second half, Ryan Hildenbrand provided insurance for the Tigers, who were well on their way to celebrating the sixth boys’ soccer championship in team history, fifth all-time at the 3A level and first since their Class 2A crown in 2003.

Ironically, Mars was the last school in Class 3A to win boys’ and girls’ district gold in the same year, back in 2020. Greensburg Central Catholic accomplished the unusual feat in Class 1A that same season.

Joining Moon and Ambridge in next week’s PIAA Boys Class 3A tournament will be Plum, the No. 2 WPIAL playoff seed, which was upset by the Bridgers in the semifinal round.

For the game’s first half-hour, Ambridge held its own in the disciplined hands of head coach Ben Fiore. The Bridgers contained a Moon attack that had entered Highmark Stadium averaging exactly four goals per match since section play began and scored 14 times in the playoffs.

Furthermore, they generated some chances of their own on the counter-attack in their 4-5-1, including a dangerous free kick by Will Gruca that had to be blocked by the Tigers’ Dominic Corrado. Moments later, Gruca sent a great through ball to Anthony Powell in the box, forcing Evan Thomas to body him off that ball before a shot could be taken.

But the other boot fell when Moon head coach Earl Pannebaker made a tactical switch. The Tigers went from their 4-4-2 to a less conventional 4-3-3, loading the middle of the field in an effort to get their own counter-attack going, and their Division I prospect provided the requisite spark.

In the 33rd minute, Aeden Costa used his space on the left wing to find Kopay right in the middle of the box, and the senior midfielder buried his one-timer to give Moon a lead it never surrendered.

The persistent Tigers seemed to deflate the ambitious Ambridge side on a set-piece goal in the 39th. Corrado took a corner kick at the left flag that went right to the head of jumping junior midfielder Cooper Nickles at the far post for a 2-0 Moon advantage at halftime.

Junior forward Davi Jansson moved the ball noticeably well at the front of Pannebaker’s retooled formation, and he helped keep the Bridgers on their collective back foot at the start of the second half. Hildenbrand just missed hooking up with an open Jansson on a diagonal ball into the box, and a left-wing free kick later earned by the latter sailed over the bar.

That duo would not be denied. Jansson, who led Moon with 14 regular-season tallies, crossed for the senior midfielder from deep on the left side, and Hildenbrand, from dead center, easily provided the final margin in the 51st minute.

Gruca, one of Ambridge’s most consistent playmakers throughout his varsity career, tried to give his team something positive to draw upon entering the state playoffs. However, the senior forward began drawing double-teams, and the Bridgers continued to struggle with their final touch up until the final horn.

Moon’s back line of Corrado, Thomas, Nickles and Marcus McCoy did a fine job supporting junior keeper Zachary Shutak, who only needed to make three saves to earn the Tigers’ third straight clean sheet of the postseason, and 13th in their last 14 matches.

The Tigers attempted 13 shots, with five falling on target, to Ambridge’s 14, and finished with a 51% to 49% edge in possession, having spent 69% of their total time of possession in the attacking half.

That’s What He Said

“I told them the story about David and Goliath, and the difference was that Goliath, in the Bible, was too confident. So the lesson learned was, not to be too confident.” -Earl Pannebaker, on how he prepared his heavily-favored Tigers to play against a lower-seeded Ambridge team

“When I played under my brother, I learned that you can’t do it all yourself. You have to play as a team. That’s the reason why we’re one of the best teams. We all play our game, and if one guy’s down, there’s always another guy who’s going to pick us up and get the job done.” -Ryan Kopay, on why this Moon boys’ team, out of all others, was able to end its 19-year title drought

“Be unselfish. Just keep thinking about the team, and not yourselves. Keep your head up, and keep moving forward.” -Davi Jansson, on the key to a successful PIAA playoff run for Moon

“I’m very proud. Obviously, nobody, outside of our camp, expected us to be here. But, I have the right guys, with the right mindset, and we believe we deserved this spot here. I think we proved that up until today, and I look forward to proving it again in the state tournament.” -Ben Fiore, on Ambridge’s historic second-place finish in the WPIAL tournament

2′ – The Tigers are already on their front foot. A ball from the left wing by Ryan Hildebrand into the 6-yard box just barely misses the head of Zechariah Balbach. Goal kick to the Bridgers. 0-0

3′ – The Bridgers get their first look at Zachary Shutak, as Chris Woten airmails a heavy shot from above the arc over the bar. Now the Tigers get a goal kick of their own. 0-0

7′ – Another long ball deep in the Ambridge box, and this time, Evan Scheib has to pay a physical price to come off his line and make the save. Moon trying very hard to nod in one of these one-timers… 0-0

11′ – Ryan Kopay’s first shot attempt of the day, from the top of the 18, is wide right of goal through light traffic. The D-1 commit will be the probable focal point of the Moon attack–and the Bridger back line. 0-0

13′ – Ryan Hildenbrand of the Tigers is shown yellow for a reckless challenge at midfield. The ensuing free kick is well cut out by the Moon defense. 0-0

16′ – Will Gruca with a great through ball to Anthony Powell, who drives to the net, but is bodied off the ball by Evan Thomas. A great chance for the Bridgers is negated in the nick of time. 0-0

17′ – Ryan Kopay clubs one from about 30-35 yards right at Evan Scheib, who drops to his left to stop it. The Tigers’ top gun clearly isn’t shy about his own power. 0-0

21′ – Free kick in a dangerous spot for Gruca, but the shot from the top of the box is immediately nodded away from goal by Moon defender Dominic Corrado. 0-0

25′ – The Bridgers are hanging tough, and they’re defending set pieces very well. Back-to-back corner kicks at the left flag, taken by Jon-Marc Balbach, get bounced around harmlessly and cleared. 0-0

YOUR KOPAY JUST WENT UP!

Aeden Costa, deep on the left wing, with a perfect cross into the box for Ryan Kopay, who makes no mistake about that one!

35′ – Nearly a second for Moon. Jacob Pulhalla finds Davi Jansson wide open on the left wing, but his chip shot goes just over the net, and over a desperate Scheib, for a goal kick. AMB 0-1 MOON

A corner kick taken by Corrado at the left flag goes straight to head of Cooper Nickles, and straight into the net, inside the back post!

Halftime at Highmark, Ambridge 0-2 Moon in the Boys 3A Final.

The Bridgers had a lot of success sitting back in a 4-5-1 and counterattacking, but the Tigers’ skill took over late in that half.

It feels like Moon has broken the dam. Can Ambridge repair it in the 2nd half?

43′ – A couple close calls for Moon, which picks up right where it left off. First, Hildenbrand’s diagonal ball into the box just misses Jansson. Then, Jansson misses a dangerous free kick from the left wing, over the bar. AMB 0-2 MOON

Jansson centers for Hildenbrand right in the middle of the box, and Hildenbrand goes right down University Boulevard!

The Tigers can taste it…

53′ – Another well-played ball by Ambridge’s Gruca, right to the toe of Powell on the left wing, but Powell pushes his shot off the left side of the net from 12 yards out. Bridgers continue to have trouble with that last touch. AMB 0-3 MOON

55′ – Non-sequitur: It took me until now to realize my old friend Dan Yost, he of Steel Army and “Miracle on the Mon” literary folklore, is one of the PIAA officials supervising this match. Hello, sir! AMB 0-3 MOON

65′ – Gruca is double-teamed right next to the penalty spot, but he still, somehow, turns around and gets a shot off that deflects off a Moon leg and bounces over the backline for a goal kick. He’s been the Bridgers’ most entertaining player today, scoreline aside. AMB 0-3 MOON

70′ – Powell takes a corner kick at the left flag for the Bridgers. Woten goes up for it, but he fouls Moon keeper Shutak in the process. Ambridge looking for something positive to take from this one before the state playoffs begin next week.

72′ – New keeper for the Bridgers. Awaiting a positive ID on who it is as Scheib went down on a similar play to the Woten foul in his own box. AMB 0-3 MOON

75′ – Well, we never got that positive ID, our apologies. But, the point is moot, as Scheib is subbed back into goal for Ambridge. AMB 0-3 MOON

FULLTIME AT HIGHMARK, AND IT IS A TIGER TWO-FER!

For the first time in nearly 20 years, the Moon Tigers boys’ side are #WPIALSoccer champions, thanks to today’s 3-0 triumph over upstart Ambridge!