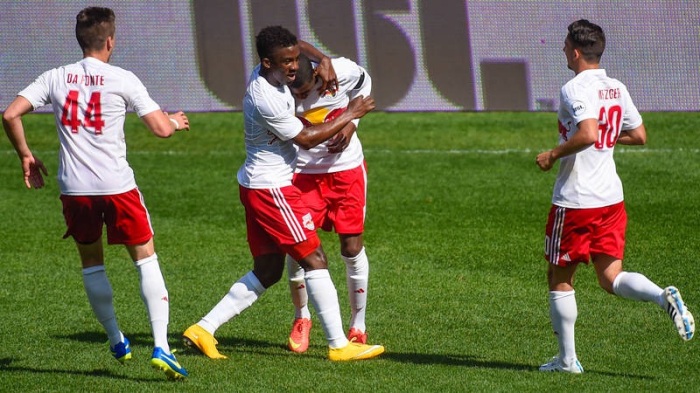 Anthony Wallace’s stoppage time goal was the difference as Red Bull II stunned the Pittsburgh Riverhounds on May 3 at Red Bull Arena.

Fizzy Drink At A Second Glance
New York jumped ahead of the Hounds into fifth place after Saturday’s 4-1 win at Saint Louis F.C. Head coach John Wolyniec has steered his side to three straight road victories following triumphs at the Wilmington Hammerheads and Louisville City.
Of the MLS “2” teams competing in the USL’s Eastern Conference, the Red Bulls have been the most formidable — showing signs they they are a very deep MLS organization with all kinds of terrific young talent who have been playing for both the top team –and their USL squad.
New York won the season’s first meeting with Pittsburgh in a wild game that wasn’t decided until the final whistle.
The Red Bulls victory on May 3 came via Anthony Wallace’s long-range volley in injury time. Andrew Jean-Baptiste prevented the Hounds from snatching a dramatic point at Red Bull Arena with a goal line clearance to thwart Drew Russell seconds before the final whistle sounded.  The Riverhounds fought back from one-goal deficits twice in the match to tie it, only to be defeated in stoppage time.
Red Bulls II midfielder Konrad Plewa was named to the USL Team of the Week for the 15th week of the 2015 season. Plewa scored twice against Saint Louis FC as a halftime substitute and finished with four shots in the game. His first goal, the eventual game-winner, was a rocket from just outside of the 18-yard box which flew just below the crossbar. His second goal, scored in the 90th minute, cemented the 4-1 victory for Red Bulls II.
Plewa, who’s scored game winning goals in consecutive matches, has totaled three goals in two games. In the previous match against Louisville City FC, the Seton Hall alumnus and Red Bulls Academy product scored in the fourth minute, burying a shot from distance into the lower left corner of the goal.
Red Bulls II leading goal scorer Anatole Abang has scored two MLS goals and earned his first assist, a game-winner, against New York City FC last weekend. Abang scored another game winning goal against New York Cosmos in the Lamar Hunt U.S. Open Cup, his third goal in all competitions with RBNY. The 18-year-old has also scored four goals for Red Bulls II in five matches this season. Abang has appeared in 11 MLS regular season matches for the Red Bulls, playing a total of 246 minutes.
Manolo Sanchez has now made three MLS appearances for the Red Bulls. He played six minutes as a substitute against New York City FC last weekend, nearly grabbing his first MLS goal in the late stages of the match, but his shot struck the post. He also made a three minute substitute appearance against Real Salt Lake on June 24
Game Storylines
For the third straight year, the Riverhounds will host a game on July 4 to what’s expected to be a near-capacity crowd.  This is a game that will be important as the two teams are separated by just three points, and holding on to the final two playoff spots in the USL’s Eastern Conference standings.
The Hounds are coming off their first shutout loss of the season — 1-0 — at the league leading Rochester Rhinos in a game that was played in a driving rain storm in Western New York on Saturday, June 27.
Josh Rife will be leading the Hounds this weekend after head coach Mark Steffens and assistant coach Niko Katic were ejected for protesting the late penalty call awarded in Rochester’s favor last Saturday.
Calle Brown and Ryan Hulings will continue to compete for the starting goalkeeper role with Ryan Thompson set to join up with the Jamaican national team this weekend ahead of the Concacaf Gold Cup competition.
It’s the halfway point of the league season for the Riverhounds, who have improved from last year’s record after 14 games (from 1-8-5 to 5-5-4) under the direction of Steffens.   You can find our breakdown of the Riverhounds at midseason here on a special edition of BREAKING DOWN THE HOUNDS in Pittsburgh Soccer Report.
Injury/Suspensions Report
The Hounds will be without captain Danny Earls and defender Willie Hunt on the field. Earls received a one-game suspension by the league after picking up his fifth caution of the season against his former club. Hunt is also sidelined for a game after being dismissed in injury time against the Rhinos for a second cautionable offense.
Rife should otherwise have a near full roster to choose from. Matt Dallman and Lebo Moloto have made good progress this week in their recoveries from their respective hip flexor and hamstring injuries.
What to Expect
This has all the makings of an exciting precursor to the Three Rivers Regatta/City of Pittsburgh 4th of July fireworks show.   Saturday’s clash promises to be an entertaining affair with both sides ranking high in the goals scored and goals conceded columns.
That being said, the Riverhounds have had improved performances on the defensive side in recent run of play — including a 1-0 shutout of Montreal Impact.   In the past four games they’ve conceded four goals.   The starting eleven will be definitely be without regulars Danny Earls at midfielder and defender Willie Hunt.   Rife has options with the Riverhounds depth at midfield to move Rob Vincent into a holding midfield role, which he has done when Earls is out of the lineup.  He can also turn to Max Touloute, Amara Soumah or Boris Zivanovic to start in one of the attacking midfield positions.
It’s likely that the young Canadian Tyler Pasher will see action on the back line this week to replace Hunt — as Rife can also use a number of other players including Dallman if he’s available or it’s possible that either Mike Green or Drew Russell could move back to defense after playing in the attack the past few weeks.
Projected Starting XI:  Calle Brown (G), Anthony Arena, Fejiro Okiomah, Tyler Pasher, Sterling Flunder, Stephen Okai, Max Touloute, Rob Vincent, Kevin Kerr, Mike Green and Drew Russell.
Fun Footnote 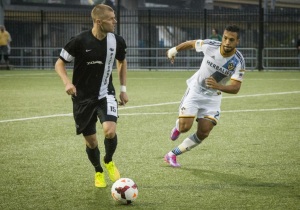 Maybe for the heck of it — the Hounds should reactivate Andrew Marshall for today’s match.  He’s been a central figure for the past two years in the 4th of July matches as the Riverhounds have had mixed results — taking a 3-2 loss to Steffens’ led-Charlotte Eagles as Marshall’s own goal was the difference.  Marshall and Darren Amoo scored in that game.  Last year, the Hounds defeated Rochester 2-0, before over 3,500 fans thanks to goals from Marshall and Alfonso Motagalvan.